After two elections, two supreme court decisions, and almost four months of waiting, Kenyan President Uhuru Kenyatta was finally sworn in on November 28 to a second term of office. It was not the joyous occasion Kenyatta’s supporters had hoped for. The October 26 repeat election was boycotted by opposition challenger Raila Odinga, and voter turnout dropped to 38 percent from the 80 percent turnout in the annulled August 8 poll.

This was a far cry from Kenyatta’s expectations earlier in the year. At the campaign’s start, Kenyatta and his vice-presidential running mate William Ruto were riding high in the polls, thanks in part to four successive years of strong GDP growth. New roads and railroads, a real estate boom, and Nairobi’s gleaming new skyline seemed to validate Kenyatta’s single-minded focus on economic development. More importantly, opposition to Kenyatta and Ruto looked weak and divided. Even among Odinga’s supporters, there was some uncertainty whether at 72, he could rally and hold together a large enough coalition to make yet another (his fourth) presidential run.

As it turned out, Odinga had more horsepower than many anticipated. By early summer, Odinga was rapidly closing the gap in the polls, and key regional leaders, including Kalonzo Musyoka, Moses Wetangula, and Musalia Mudavadi, had rallied to his National Super Alliance (NASA) movement. Though private polls consistently showed Kenyatta with a five to seven-point statistical lead, Kenyatta’s partisans worried the election might be slipping away. For his part, Odinga was confident he finally had the numbers to win.

In the end, Kenyatta won the August election much as the private polls predicted he would. Odinga and his followers immediately alleged widespread rigging. In a surprise decision on September 1, Kenya’s supreme court annulled the August 8 ballot. The court did not find evidence of rigging, but rather of irregularities and illegalities at the Independent Electoral and Boundaries Commission (IEBC) so widespread as to make a fair determination of the result impossible. A new election date was set for October 26.

Kenyatta’s response was to savage the supreme court and introduce legislation to restrict the autonomy of the court and the IEBC in overseeing future elections. From his camp, Odinga redoubled demands for a complete overhaul of Kenya’s electoral machinery before any new vote. Under pressure from both sides, the IEBC buckled. One commissioner, in fear for her life, fled to the United States. IEBC Chairman Wafula Chebukati announced on October 18 that the IEBC simply wasn’t in a position to produce a credible election, although this admission was awkwardly recanted less than a week later.

As many had predicted, Odinga withdrew from the race and called upon his supporters to boycott what he claimed would be another rigged contest. Western diplomats failed in efforts to broker a deal to persuade Odinga to re-enter the race, and the Kenyatta government pressed ahead with the one-sided re-run.

Reflecting on the election in remarks to a Washington audience at CSIS on November 9, Odinga warned that Kenya was headed towards dictatorship. He called for greater international support for the defense of democracy in Kenya and vowed to continue leading resistance to an “illegitimate” government.

Rejection of Kenyatta’s election victory still burns hot across much of Kenya. Resistance has taken the form of marches, protests (some violent), economic boycotts, vows to form a “People’s Assembly” to challenge governmental authority, and, in parts of the Coast and Western provinces of Kenya, calls for outright secession. A plan to swear in Odinga as President on December 12 was called off at the last minute, after some NASA leaders urged Odinga to desist.

Governmental reactions have been harsh. Police have repeatedly used live ammunition at protests by Odinga partisans. On November 18, police bullets struck a vehicle in which Odinga was riding. At the site of a planned NASA rally and memorial service on November 27, human waste was dumped to drive away participants, allegedly by the police or Nairobi municipal authorities. Human Rights Watch, in a November 21 statement, called on Kenyan authorities to rein in police abuses and investigate scores of killings, most of them by police, during the prolonged electoral period.

Kenyatta thus begins his second term as the head of a nation that is as badly polarized as ever. As if to symbolize this, Kenyatta was embarrassed when only a tiny crowd showed up for his Independence Day speech at a Nairobi stadium on December 12. Investigations were ordered into this “organizational” failure.

Yet, Odinga’s strategy of resistance is problematic. His aim to force another election is not realistic and, even if it were, it is far from clear that he would win. Though many continue to dispute Kenyatta’s legitimacy, just as many Kenyans are weary of persistent economic disruptions, street violence, and brutal partisanship. The impulse to “move on” is strong, especially outside Odinga’s geographic strongholds.

Most eager to move on are Kenya’s business community and international investors who, despite the political turmoil, are aligned behind Kenyatta’s post-election promise to continue prioritizing macroeconomic growth and development. Many Western governments share this view. Risks to Kenya’s democracy may matter to Washington, but not more than cooperation with Kenya on economic development or in the fight against Al-Shabab terrorists in East Africa.

Though foreign governments are only half-listening to him, Odinga is correct to warn of democratic backsliding. Kenya’s remarkable constitution, ratified in 2010 after years of consultations and negotiations across all of Kenyan society, not only guarantees a wide range of personal freedoms. It also limits executive power, guarantees checks and balances, establishes impartial oversight of key government operations, and encourages civil society’s watchdog role. These impressive gains are at risk as an embattled president hits back hard at challenges to his authority, and as partisanship runs unchecked largely along ethnic lines.

Missed opportunities are a symbol of the 2017 elections. Kenyatta’s biggest mistake was to react vindictively to the September 1 supreme court decision. Had he instead immediately pledged to ensure a credible rerun and then acted promptly to address weaknesses in the IEBC, Odinga would have had a much harder time making the case that the re-run would inevitably be rigged. Since Kenyatta doubtless believed that he’d won a clear and mostly clean victory on August 8, taking the high road was a safe strategy. Instead, he and Ruto created the impression that they were anxious to ram through a second vote as quickly as possible, and by any means necessary. This made it much easier for Odinga to cry fraud and justify his boycott of the second round.

Odinga’s mistake was his lack of a clear post-boycott strategy. Chances were never good that a campaign of aggressive but peaceful post-election resistance would overturn the election results. Rather than using guerrilla tactics to contest Kenyatta’s legitimacy, Odinga would have been better advised to use his limited leverage to demand deep political reforms to counter the dictatorial tendencies he decried. These could include further legal or constitutional restraints on presidential power, steps to strengthen Kenya’s legal infrastructure, and a long overdue clean-up of corruption within the Kenyan police and security services.

Would Kenyatta be willing to give Odinga a leadership role in such an effort in exchange for Odinga’s willingness to “move on?” And would either man’s supporters accept such a trade-off? Perhaps not, but a compromise of this sort is worth a try. It is not the political prize Odinga has spent a lifetime seeking, but it would be a fitting legacy and capstone to a distinguished political career.

Deals between rivals like Kenyatta and Odinga are the lifeblood of Kenyan politics. The number and diversity of Kenya’s ethnic communities require such dealmaking. Kenyatta needs at least the acquiescence of Odinga’s base if he is to govern as something other than the representative of a regionally-based constituency (and one that is likely to fracture in the run-up to the next presidential election in 2021). From Kenyatta, Odinga needs respect, as well as acknowledgement of his concerns and his status. Both men’s camps are wary of Vice President William Ruto moving into the presidency in 2021, which is another impetus for a deal.

Regardless of possible reconciliation at leadership levels, the connective tissue of Kenya’s democracy—its legal community, civil society, and media—will continue to work towards cleaner and more accountable government. The most important step the United States and other donor states can take in the near-term is to reaffirm their unequivocal backing for these Kenyan organizations that so often operate under duress. There will be many ways the U.S. and other governments can partner and work with the Kenyatta government in coming months, but continuing U.S. support for the grassroots infrastructure of Kenya’s democracy should be a non-negotiable fixture of the bilateral relationship.

Mark Bellamy, a former career diplomat and U.S. ambassador to Kenya, is a senior adviser to the Africa Program at the Center for Strategic and International Studies (CSIS) in Washington, D.C. 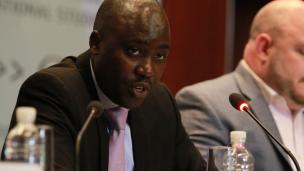