Energy and economic growth are linked: without access to energy, growth is impossible; and economic growth will lead to more energy use. But the relationship between the two is complex and often misunderstood. The development agenda, through the UN Sustainable Development Goal #7, has zoomed in on energy access, renewable energy, and energy efficiency as important metrics. But as more people gain access to electricity, we are confronted with fundamental questions about whether access on its own is enough to not only alleviate energy poverty but also lead to economic growth—without regard, for instance, to quantity or quality. At the same time, there is an emerging argument that energy is a precondition for growth—that if countries want growth, they need to invest in energy supply and energy-intensive industry (here or here).

Underpinning this debate are a set of relationships—some assumed, some empirical. We understand that energy and incomes are linked, even though we observe large variations in energy use among countries with similar income levels (more on this below). What we understand less is elasticity—how much energy use grows as income grows, and why that number varies by country, sector, and over time. There is, in other words, a need for nuance and detail in talking about this topic. This means not extrapolating linearly between the past and the future, and not transposing the experience of developed countries into those still developing. But it is also a call for better data and targeted research on what we do not know, and for a policy agenda to learn from the best to help the rest.

At a basic level, there is a relationship between income and energy use in non-OECD countries, measured as the association between per capita gross domestic product and per capita energy consumption in 2016 (data from the International Energy Agency). The link is clear both visually and statistically (a simple linear regression is statistically significant at the 0.001 level with an r-square of 0.55; and the slope is 0.18, meaning an extra $1,000 in per capita income can be expected to translate into a 0.18 increase in per capita energy use).

Even at this macro level, however, there is variation. Qatar, with the highest per capita income and the highest per capita energy use, consumes 25 percent more energy than the (simple) model would predict. Trinidad and Tobago, the country with the second highest per capita energy use, consumes four times more energy than its predicted value (largely due to a sizable petrochemical industry). These variations exist at the other extreme as well: Niger consumes one-fourth the energy predicted by the model, which means that Niger has reached a certain (low) income level with three-fourths less energy than other countries at a similar income level. However, this model tells us something but not everything. 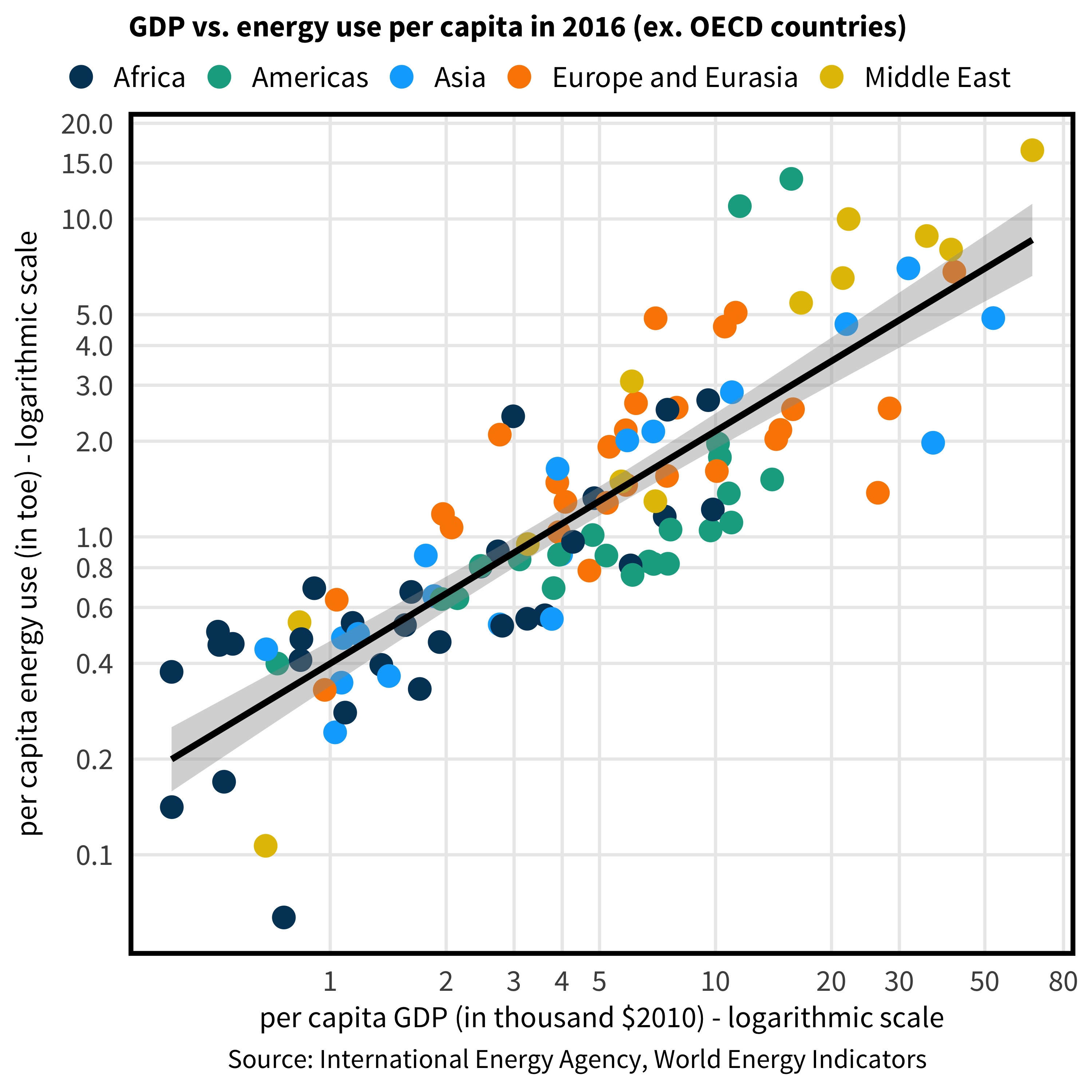 But here too, the variation is substantial. Consider the four countries with the highest growth rates in per capita energy use (top of the y-axis): from left to right, they are Gabon, the Republic of the Congo, Vietnam, and China. Energy consumption per capita grew by 5.2 to 5.6 percent a year in those countries. Yet Gabon’s per capita income declined, whereas, in Vietnam, it grew by more than 5 percent annually, and in China by almost 9 percent. In Ethiopia, income grew by over 6 percent annually while energy use grew by less than 0.4 percent a year. Panama, Bangladesh, and Mozambique experienced similar growth rates in income, around 4.5 percent a year, but the growth in energy use in Bangladesh was twice as high as in Panama and four times as high as in Mozambique. Growth, too, tells us little. 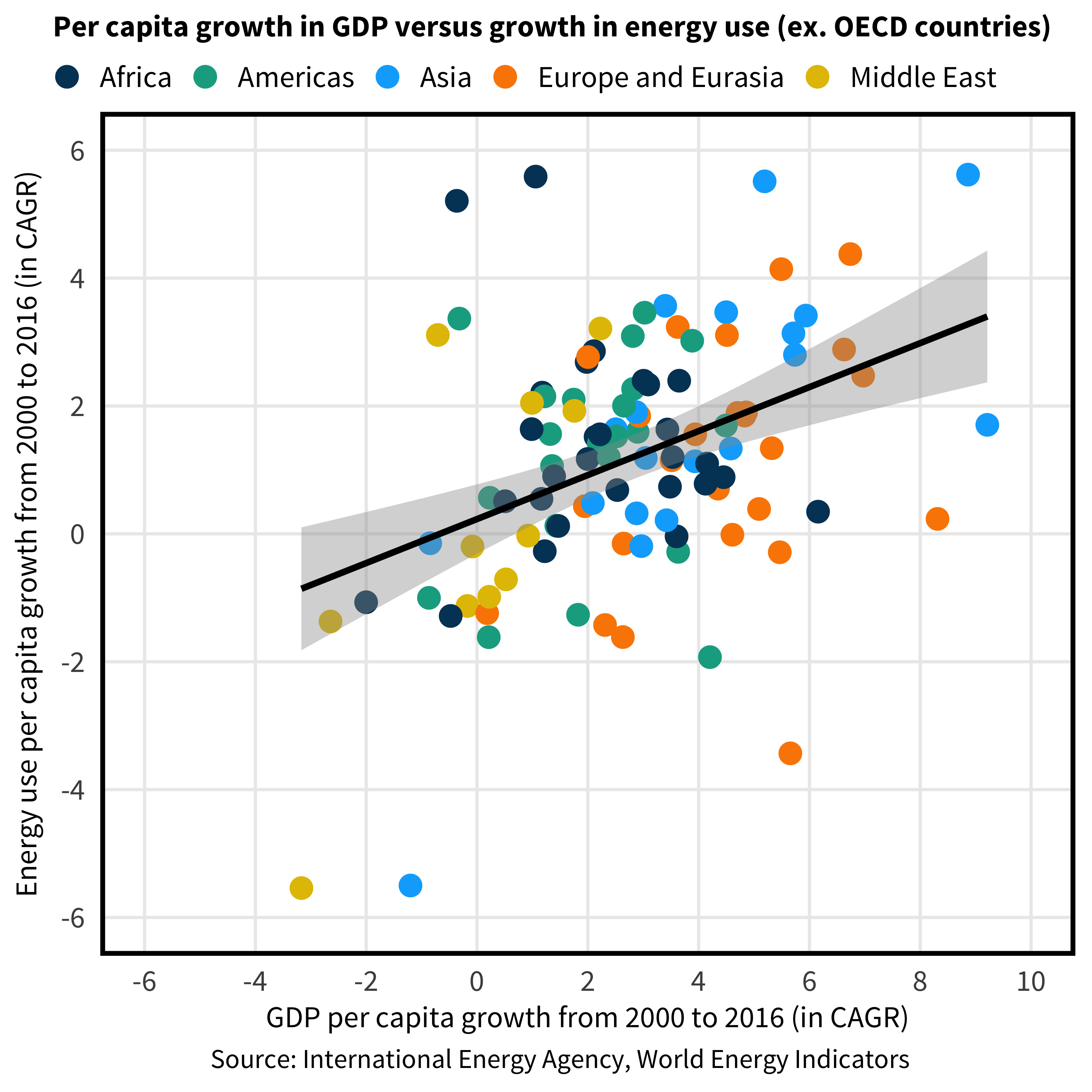 These variations are no easier to explain by breaking down energy demand into sectors. The graph below is a bit complicated, but it just shows the growth in per capita income against growth in energy use in three sectors: buildings, industry, and transportation. The relationship is again hard to pinpoint: there is some link, but not uniformly. Looking only at countries that experienced GDP growth, there are some interesting insights: of the 93 countries, industrial energy use declined in 31; the equivalent number in buildings is 18, and 10 in transport. This would imply a greater ability to grow without using more energy in industry but harder to grow without using more in transportation and, less so, buildings. But again, the broad relationships are far from uniform. 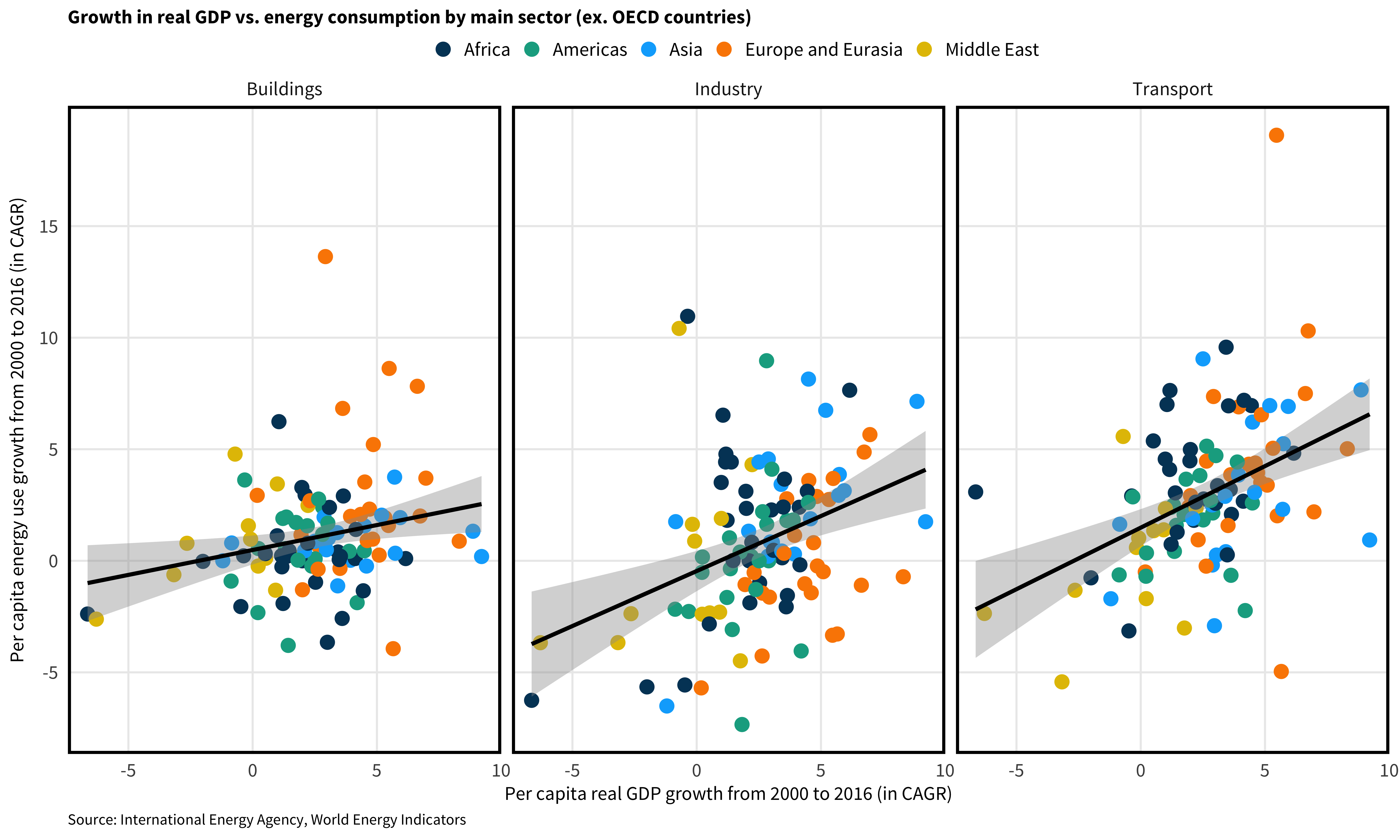 A few examples might help illustrate the mechanics at play.

Gabon stands out for the disconnect between income and energy use: per capita energy use by 50 percent without any increase in per capita income. Energy use is largely driven by industry, and industrial energy use rose eightfold from 2000 to 2016. But industrial value added did not increase at all—just 3 percent cumulatively. Oil might be one reason: oil production declined, so there might have been a switch from one industry to another that left value added flat, but which drove energy use in industry. There is more to this story, surely, but the idea that a country’s industrial energy use could increase eightfold without a change in industrial value added and per capita income should highlight the complexity that connects these variables.

Bangladesh followed a more textbook pattern: per capita income rose by 4.5 percent a year from 2000 to 2016, and energy use rose by 3.5 percent annually. Like Ethiopia, residential energy use is the largest consumer of energy, but industry and transportation are more sizeable. Energy use in industry, transport, and services grew much faster than GDP. Residential energy grew too, but at a slower rate than GDP, suggesting a slow adoption of energy-intensive consumer amenities. Bangladesh’s per capita income is twice as high as Ethiopia’s, but its residential energy is one-fourth of Ethiopia’s—once again highlighting the immense discrepancies that can be observed across countries.

Saudi Arabia offers a final contrast: per capita energy use grew at twice the rate of income. Energy use per capita rose everywhere—in the residential sector (+2.6 percent per year), in industry (+1.9 percent), in transport (+2.3 percent), and in services (+5.2 percent), even though incomes grew at just 1 percent each year. Unlike Gabon, Saudi Arabia’s industrial value added kept growing through this period, but at the same rate as population, so industrial value added per capita was the same in 2016 as in 2000. Low energy prices possibly created additional demand for energy. In 2016, per capita energy use in Saudi Arabia was similar to the United States, even though income in the United States was 2.4 times higher.

The overarching point is that variation matters—both in terms of where counties end up but also in terms of how much energy they need to grow. Rather than asking whether a country will consume more energy as it grows richer, we should ask how it might use less energy in the process. When countries at similar income levels consume two or three times more energy among them, there is scope for heavy energy users to use less energy.

To inform this conversation, we need better data and targeted research that explores this variation. For instance, the energy intensity of different industries varies drastically. In the United States, the energy used per employee (from 2014 data) in, say, the chemical industry is 30x greater than the energy used in manufacturing machinery; food is 12x more energy intensive than apparel. And this does not include changes over time: the energy used per employee in the apparel industry fell by 29 percent between 2002 and 2014, but it rose 30 percent for computer and electronic products. What we call “energy efficiency” is sometimes a shift from one industry to another—except we do not always have the data to know this.

A similar need exists for buildings, where the best performers are showing substantial gains and where understanding variation can help inform policy. In the United Kingdom, the energy used for light by households declined by 25 in less than a decade, for air conditioning (AC) by 13 percent in 20 years, and for fridges by 37 percent in 20-odd years (from 2017 data). Our ability to steer emerging consumers towards more efficient products will have a huge impact on energy use. As the International Energy Agency noted in a recent report, “More efficient ACs cut CO2 emissions from space cooling in half and combined with cleaner power sources can radically reduce overall emissions.”

Transportation raises similar questions. Vehicle ownership is rising in emerging economies, but we still do not know what kind of vehicle density emerging economies will adopt. Will they look more like the United States, with over 800 passenger cars per 1,000 people, or like Europe, with vehicle penetrations around 500 vehicles per 1,000 people? And what mileage will those vehicles get? In the United States, average fuel economy rose by 40 percent after the oil shocks (from 1974 to 1991) but has since improved only modestly. Air travel in the United States was 75 percent more efficient in 2015 than in 1970; freight rail 57 percent and intercity passenger rail 50 percent (the last versus 1975). We make assumptions about the interplay between growing incomes and energy use in emerging economies—even though experience has shown that the variation in energy use can be substantial.

There is, in short, a great need for detailed work in exploring the complex interplay between energy and growing incomes; for targeted research supported by more and better data; and for a policy dialogue that sees an opportunity for efficiency rather than dead-ends and impossible trade-offs. The dividends from better research and smarter policy will be substantial.