Leave the Paris Climate Accord? Why Leave Money on the Table?

At its core, the Paris Agreement is a mechanism to encourage and coordinate action to address global climate change underpinned by a compilation of country-based pledges toward that end. There are no penalties for failing to meet a nationally determined contribution or pledge; simply a system of consultation and review to help countries find strategies to improve their performance. The Trump administration has been arguing that the United States got a raw deal because (a) other large emitters do not have to do as much as the United States and (b) the target put forward by the Obama administration would unduly burden U.S. industry and harm U.S. competitiveness.

The legal interpretation of whether the United States can stay in Paris and change its target or whether it must leave the agreement for fear of being sued for noncompliance is currently the focus of much speculation. Quite frankly, in a global agreement where ambition and comparability are so loosely defined it is hard to imagine that changes to a country’s target taken in good faith could be met with too much resistance. While the debate is centered around staying and trying to change the target or leaving the agreement, the administration has a third option that isn’t getting much consideration: stay in and try to meet the target.

It sounds radical, but the arguments for it are actually pretty solid. The agreement has no penalties for not meeting your target—you just need to try. It encourages other countries to do things that are in the long-term interest of the U.S. economy and security interests—like better prepare for a changing climate, think about ways to improve energy efficiency, create and collaborate on new technology, and create markets for advanced energy technologies; the last is an area where the United States is quite competitive.

Take natural gas for example: most major energy outlooks show that, absent some sort of global climate policy, the global market for natural gas is not as strong as it would be otherwise. Climate policy is good for a country that wants to sell natural gas. Cheap natural gas has been the justification for a great deal of investment in the petrochemical industry in the United States as well—most states with ample coal and gas resources have seen a bigger uptick in investment and job creation from gas than coal in the recent past—and strong demand underpins incentives for continued U.S. gas production.

The market for renewable industries where the United States is a leader today, like solar, wind, storage, advanced electricity technologies, and data analytics, will also not be as strong absent a global climate pact and the pledges that underpin it. A global framework that supports policies that encourage these industries is good for a lot of companies and communities in the United States. That is probably why 16 companies, including mining and oil and gas companies, sent a letter in support of staying in the Paris Agreement, and 12 governors have done the same. As graphically depicted recently by The New York Times, the Department of Energy did a breakdown of jobs in the energy industry, and when you group together natural gas, renewables, and nuclear, the share is quite large. By all accounts, encouraging job creation and economic opportunity in those industries may be easier and lead to more advanced manufacturing than a revitalization of the coal industry, which is being harmed by market forces above and beyond environmental regulation. 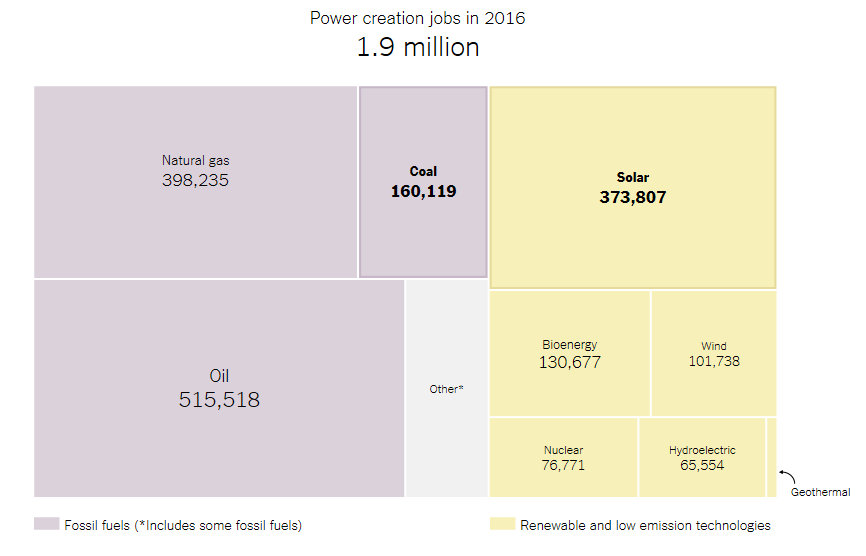 The other thing to consider is that the Trump administration would not have to meet the U.S. target in the same way that the Obama administration proposed to do. They could choose a less regulatory-focused path, one that incentivized state-level action, private-sector commitments, and a much more robust role for technologies like carbon capture and sequestration (CCS) and highly efficient fossil-based energy technologies. These are also things that the coal industry would like to see to boost its competitiveness abroad. Utilities are also asking for a new approach to domestic climate policy that helps them navigate some of the complicated transitions underway in electricity markets around the country. Given that states are the ones grappling with the positive and negative impacts of the energy transition already underway, maybe the federal government could task states to come up with implementation plans for the U.S. pledge and use a model of cooperative federalism to drive an organic U.S. pledge from the bottom up.

On the diplomatic level, the United States would avoid a whole bunch of diplomatic blowback through this approach and get the opportunity to negotiate a new target for the next round of emissions reduction based on the actual experience of trying to meet the current target. It would also maintain a seat at the table in one of the only major global agreements with the power to shape economies in the coming decades. It is easy to see how many parties to the Paris Agreement might view this approach as disingenuous, but if the framework agreed upon in Paris is to stand the test of time, it will need to be able to work with countries that fall short of their pledges or reconsider their pledges and do the hard work of keeping them on board.

Why won’t the administration pursue this route? Conventional wisdom states that that administration needs to fulfill its promise to its base about leaving the agreement or negotiate a better deal for itself. But that’s what they said about NATO, NAFTA, and other multi- and bilateral engagements, most of which the administration has chosen to stick with despite harsh campaign rhetoric—but only in concert with agreements to improve upon these existing organizations. The administration is slowly realizing that U.S. equities and interests are more complicated than they seem at first glance, and this is a good thing.

Anyway, before making the decision it seems like the Trump administration should consider, in addition to all the diplomatic reasons to stay in the Paris Agreement, whether the U.S. economy will be leaving money on the table by not encouraging climate-related policies that may actually enhance U.S. competitiveness.

Economy Disrupted: The View from Oklahoma City
June 21, 2021
View all content by this expert