Energy Impacts of Harvey Will Be Felt Globally

Tropical Storm Harvey continues to afflict much of Texas and the Gulf Coast. Although hurricane-level winds have subsided, rain and flooding continues to hamper recovery efforts, forestalling attempts by residents and businesses to return to some sort of normality. Friends and colleagues in Texas are in our thoughts as they deal with personal losses and what could be months of recovery. For others outside the Gulf Coast area, however, the energy and economic impacts of the storm’s devastation are just beginning to be felt.

Late last week in preparation for Harvey’s advance toward Corpus Christi and Houston, offshore operations for Gulf Coast platforms were being shut down and crews evacuated for safety reasons. Over 20 percent of oil production from the Gulf of Mexico was taken offline with additional onshore volumes shut in (predominantly in the Eagle Ford basin).

At least four marine terminals in the Corpus Christi area were closed to both incoming and outgoing tanker traffic. Incoming oil tankers were sent out to sea to avoid the storm, and crude and refined product exports were halted. The Houston Ship Channel, a busy conduit for tankers and barges, was experiencing silting from the storm and traffic was restricted.

All six refineries in the Corpus Christi area were shut down, according to the Office of Infrastructure Security and Energy Restoration (ISER) at the U.S. Department of Energy. ISER reported Monday morning that although one refinery had begun startup operations, four refineries in the Houston/Galveston area were in the process of shutting down. Over 45 percent of the nation’s refining capacity is situated in the Gulf area, and coastal refineries in Texas make up about half of that total and include large facilities operated by Exxon (Baytown refinery with 560 thousand barrels per day [kb/d] of capacity) and Shell (325 kb/d at Deer Park). 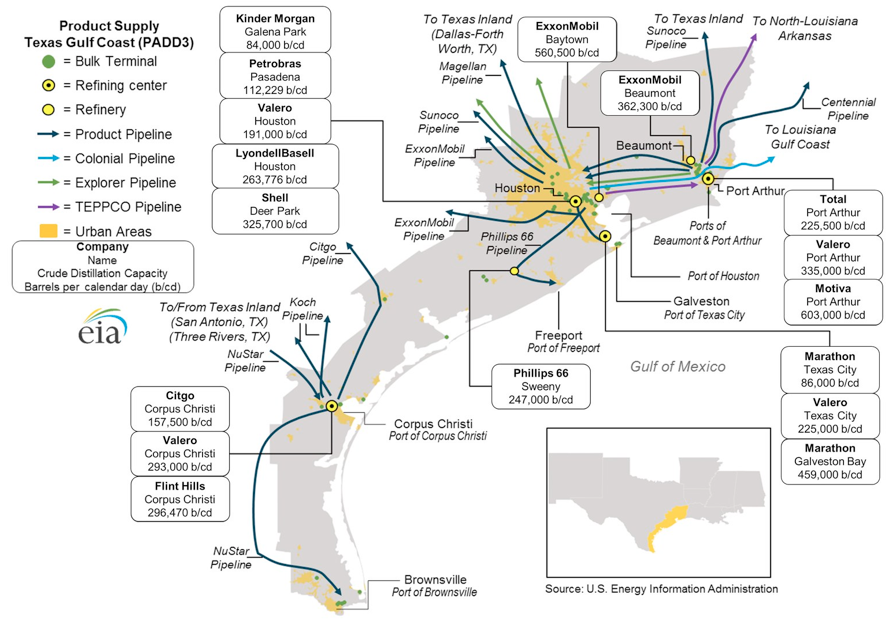 Flooded highways caused problems for refinery workers and crews, and Marathon reportedly also cut back operations at the Texas City plant. Motiva and Total’s facilities were reportedly double staffed in anticipation of the storm’s arrival, but information on current operational activity or expected recovery dates is scarce. In cases where equipment was damaged or pumps were submerged under water, recovery and restart of the units could take weeks.

News of refinery closures and continued rain and flooding caused U.S. gasoline prices to spike this morning. The Nymex RBOB gasoline contract closed Monday at $1.73/gallon, the highest level since August 2015. The impacts of Harvey are expected to be far more widespread. At present, the Colonial pipeline continues to supply product up the U.S. East Coast, but some traders worry that unless regional tank farms are amply supplied, other states could soon see shortages in addition to higher prices. ISER confirmed that the U.S. Environmental Protection Agency (EPA) approved a request made by Texas to waive requirements for reformulated gasoline, Reid vapor pressure, and Texas Low Emission Diesel for select counties in Texas to help alleviate constraints on gasoline for retail stations due to the storm. In addition, trucking hours-of-service rules have been waived for Texas and Louisiana by transportation officials.

Since the United States currently exports both crude oil and substantial volumes of refined products, ongoing problems with Gulf Coast refineries and port facilities will leave global purchasers looking for alternative supplies. Traders are reportedly already scouring Asian and other markets in search of refined product, and refiners outside the affected area with available refining capacity—like the U.S. East Coast and Europe—could soon experience increased utilization rates and sales of gasoline, diesel, and aviation fuel.

As for how long this continues, it is difficult to speculate except to say that recovery will take weeks not days. And to the extent refiners either suffer extensive damage or choose to go into maintenance/turnaround season early, this could persist into the fall.

For more CSIS analysis on the impacts of hurricane Harvey, see Harvey Continues to Batter Energy Markets and Harvey’s Assault on the Gulf Coast Raises Questions about Energy System Resilience and Policy Choices.

Frank A. Verrastro is a senior vice president and trustee fellow at the Center for Strategic and International Studies (CSIS) in Washington, D.C. Adam Sieminski holds the CSIS James R. Schlesinger Chair for Energy and Geopolitics.

© 2017 by the Center for Strategic and International Studies. All rights reserved.
Photo credit: Joe Raedle/Getty Images