Odisha struggles with significant challenges, including having some of the poorest and most isolated districts in India. Endowed with rich mineral resources and a long coastline, all the key topographical ingredients are in place to catapult the state’s economic development. To address some of the deep-seeded challenges faced by the state’s population, the state government, led by the Biju Janata Dal, has responded with populist measures that have won it unusual stability in office. Odisha’s governments have in the past shown that they are willing to play risk taker as the state, though shaky in its eventual execution, was an early adopter of power sector reforms. Paired with relative political stability, Odisha’s stature as an investment destination is rising. Those wanting to power it’s economic development will find that the key to success is supporting skills development and entrepreneurship in the power sector while supporting renewable energy integration efforts that pair well with the state’s broader development and service delivery initiatives.

Odisha has increased the share of the population with electricity access from 82 percent in 2015 to 100 percent in 2019. An important measure of the health of the state’s electric power sector is aggregate technical and commercial losses (AT&C), which measure line losses from transmission and distribution equipment, power theft, billing and collection inefficiencies, and customers’ inability to pay. Odisha’s AT&C losses in 2015 were 38 percent. Under the state’s “24x7 Power for All” plan formed with the central government, the state’s utilities would target AT&C losses of 20 percent in 2019. As of 2018, the state’s utilities have decreased losses to 28 percent. Unlike the other states in this series, Odisha is not participating in the central government’s Ujwal Discom Assurance Yojana (UDAY) scheme to improve the financial health of the country’s utilities, so it does not have targets for smart meter deployment. While smart meters have not yet been deployed in the state, government officials indicated in interviews that they were working with the central government’s Power Finance Corporation to do so. The city of Bhubaneswar has a target of deploying one million smart meters as part of its “Smart City” plan implementation.

Odisha has a target to install 2,377 megawatts (MW) of solar power in the state to contribute to the central government’s target of 100 gigawatts (GW) by 2022. As of July 2019, data from the Ministry of New and Renewable Energy indicate it has installed 397.28 MW, 17 percent of its goal. 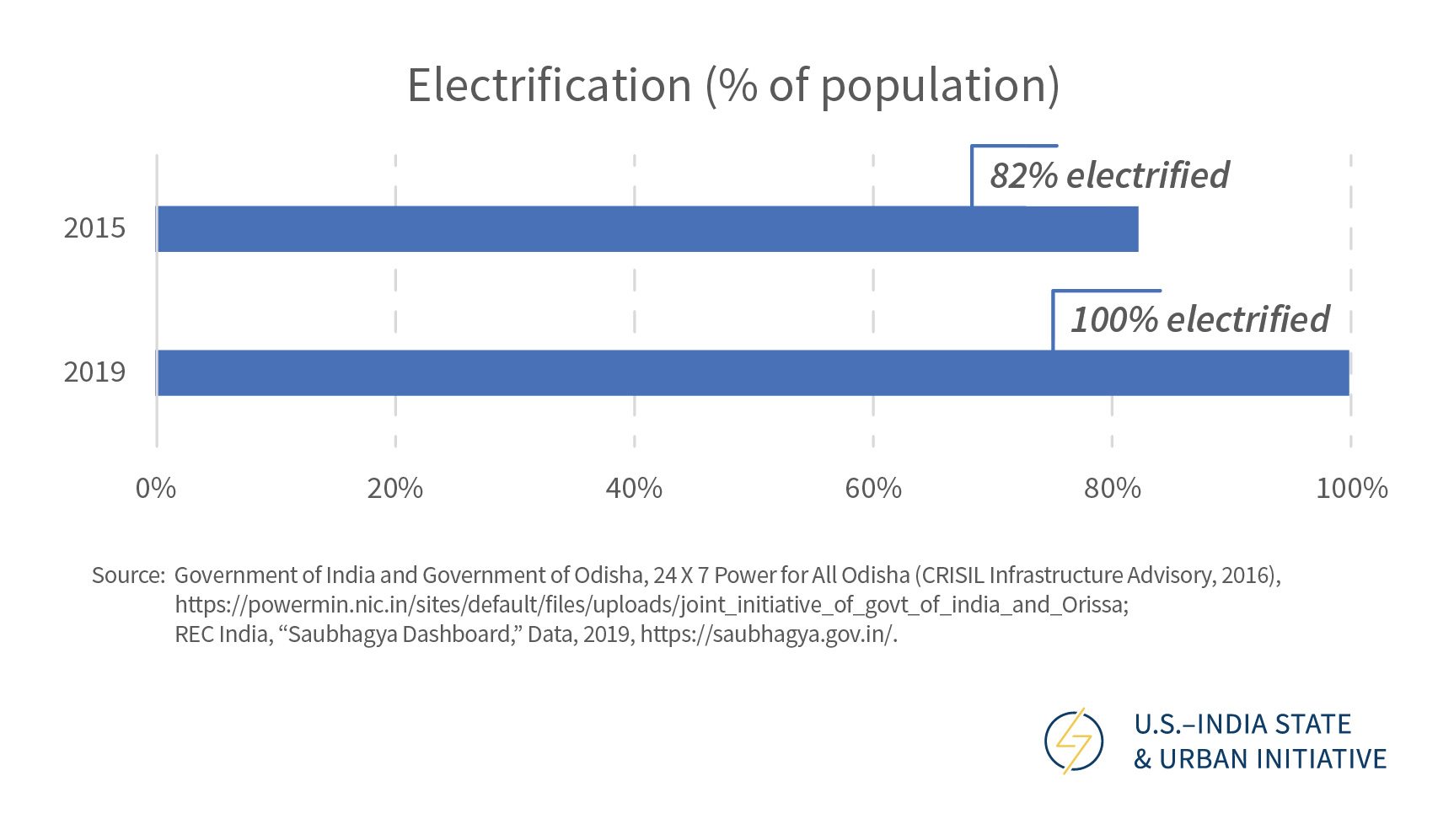 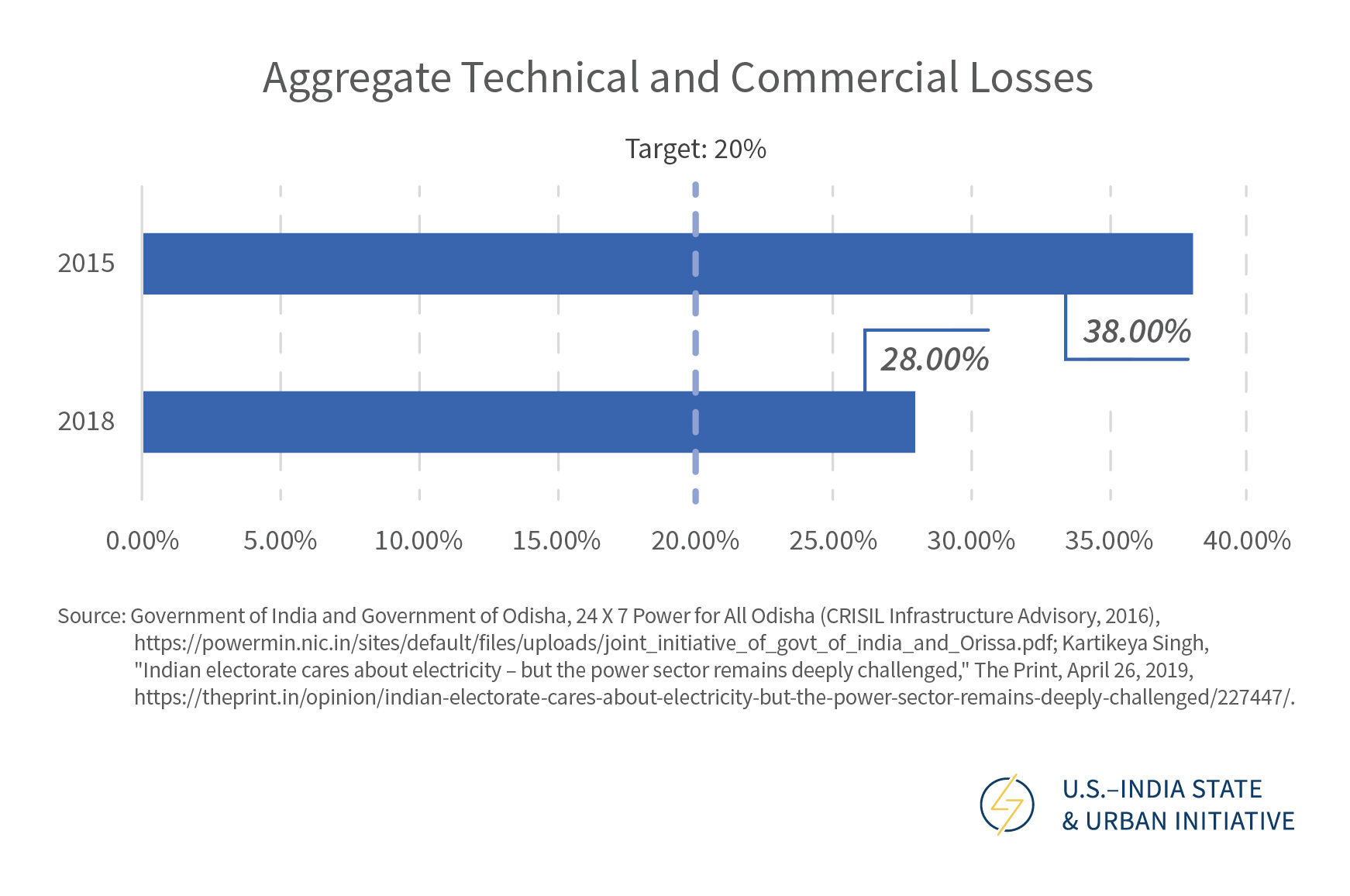 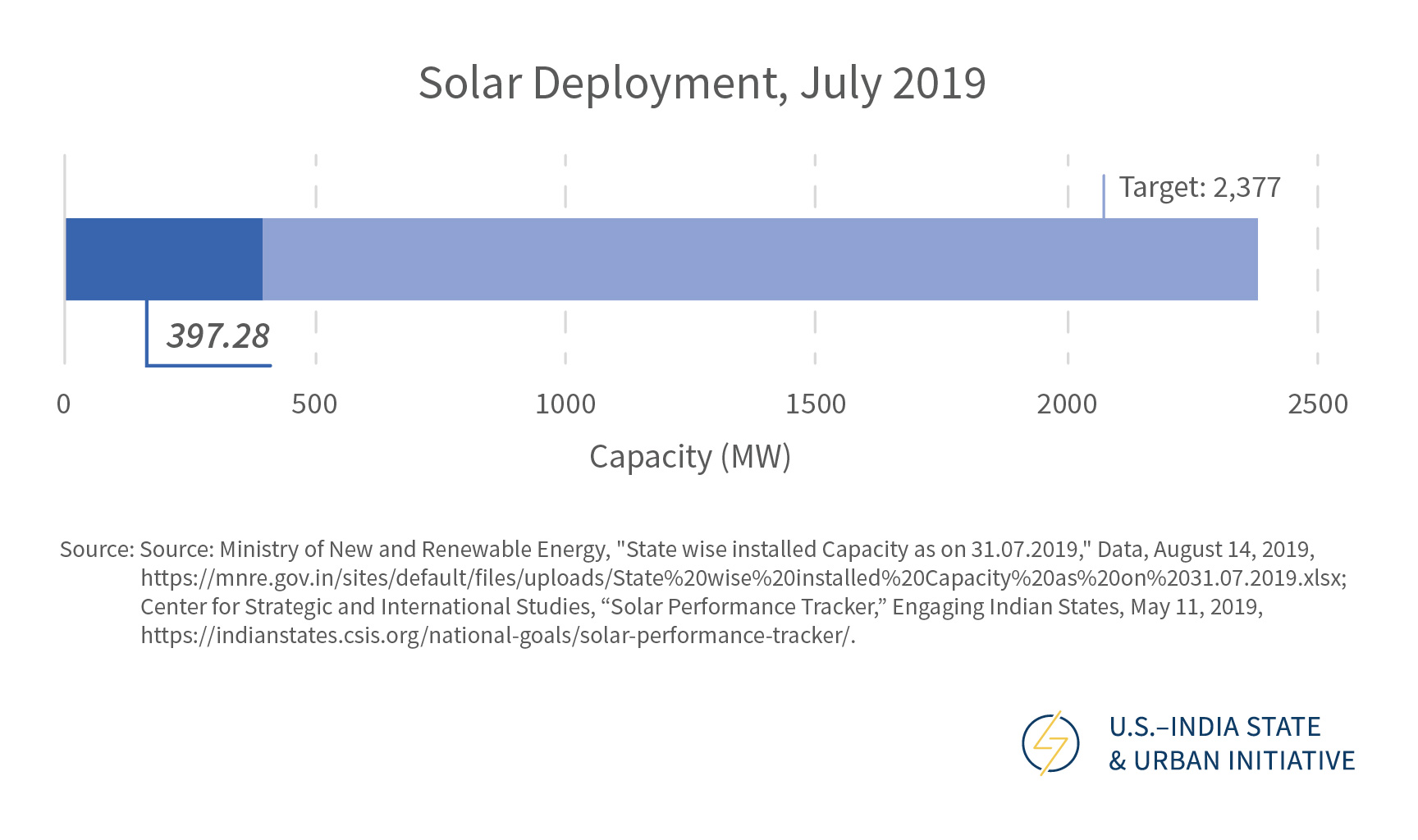 Over the past few years, Odisha has focused on deploying solar power—especially rooftop solar—as well as deploying coal power, determining control of its distribution companies, and building gas distribution for use in heating, cooking, and vehicle fueling.

Odisha began allowing grid-connected rooftop solar installations in August 2017. In November 2017, the state instituted a net metering program, crediting customers for the power generated from their rooftop solar systems as long as it makes up less than 90 percent of their annual consumption. In April 2019, the Odisha government gained central government approval to install 18 MW of solar on government buildings across the state. Odisha is building ground-mounted, utility-scale solar as well. In August 2017, German-based IBC Solar signed a power purchase agreement (PPA) with the central government’s Solar Energy Corporation of India for a 20 MW plant being developed in Odisha as part of a 270 MW tender awarded in 2016. In February 2018, Odisha announced a tender for 1,000 MW of solar projects in the state. Odisha’s electricity trading company Gridco signed two PPAs to buy power from solar projects that won bids in this tender: a 40 MW project developed by the National Hydroelectric Power Corporation (NHPC) and a 75 MW project developed by Aditya Birla Renewables. The NHPC plans to build an additional 60 MW of solar once the first 40 MW are completed. As solar power deployment increases and solar projects reach the end of their anticipated lives, the state expects an increasing waste disposal burden. As a result, CSIS assisted the Odisha Renewable Energy Development Agency (OREDA) in identifying the right partner to conduct a study on renewable energy waste and to help develop a policy on end-of-life solutions for solar panels and batteries in 2019.

Odisha makes use of its considerable coal reserves to generate most of its power, but not without issues. In August 2017, a breach in a coal ash pond owned by aluminum company Vedanta led the state’s Pollution Control Board (OSPCB) to order the company to temporarily shutter over 1,600 MW of coal-fired power capacity. Later that month, the OSPCB rescinded its order for some of the closures, allowing the company to keep 870 MW online. The state has attempted to develop new coal-based generation resources as well. In January 2018, India’s Minister of Petroleum and Natural Gas announced that central government-run natural gas company GAIL would build the country’s first coal gasification plant in Odisha. This plant would convert coal to synthetic gas that would be cheaper than natural gas for fertilizer production, but theoretically this could be used in power generation or to create transportation fuels. The plant began construction in September 2018 and is expected to be completed in 2022. The central government-run National Thermal Power Corporation (NTPC) has also been constructing a 1,600 MW supercritical coal plant—one that uses water heated and pressurized to a “supercritical” state to boost efficiency—and is expected to come online in September 2019.

While not directly related to the power sector, the buildout of natural gas infrastructure in Odisha is relevant to the state’s management of energy resources, especially in transportation. In July 2017, the central government began construction of a liquefied natural gas (LNG) import terminal in Odisha, beginning a project to build out gas infrastructure across India. As part of this project, GAIL began supplying piped natural gas to homes in Odisha in October 2017 with a plan to increase the buildout of pipelines and the distribution to more households through 2019. GAIL, Bharat Gas Resources, and Adani Gas Limited announced in November 2018 they would invest Rs. 34 billion ($474 million) in Odisha over eight years to build pipelines for piped natural gas and fueling stations for vehicles using compressed natural gas (CNG), a cleaner alternative to diesel.

To follow the reforms and initiatives in Odisha’s power sector, please visit: https://indianstates.csis.org/states/odisha/.

In September 2017, Prime Minister Narendra Modi announced the Saubhagya Scheme, an ambitious effort to provide electricity to the 40 million households that still lacked access. The government announced the completion of the initiative in early 2019. Now that Odisha has connected 100 percent of its population to power, some stakeholders in Odisha have suggested that the state should focus on using energy to boost livelihoods. Given the state’s large agricultural sector, off-grid electricity access solutions to store food are an important area where energy could support economic development. Mumbai-based Ecozen Solutions has deployed off-grid, solar-powered cold storage facilities in Odisha that can be located close to farmers’ fields. Odisha is also working to integrate renewable energy into its mostly coal-based grid. This will likely take the form of adding energy storage to the grid to make the addition of variable renewable energy easier.