Europe in 2019: A Critical and Transitional Year

For European countries and institutions as well as for transatlantic relations, 2019 will be a pivotal year. With several important leadership, policy, and structural transitions taking place in capitals and Brussels, there will be instability and uncertainty but from this could stem more positive dynamics. While the twists and turns of events remain unpredictable, what follows is a quick take on some of the most significant events on the European and transatlantic security and defense calendar for 2019 and the important stakes that are at play.

The only certainty surrounding Brexit is that it will be fraught with uncertainty and will be a major political distraction for the United Kingdom and the rest of the European Union well into 2019.

Once this is ultimately sorted one way or the other and there is clarity regarding the United Kingdom’s departure, the United Kingdom and the European Union can finally move to discuss their future relationship in foreign policy, security, and defense where both sides share an interest in maintaining robust cooperation. Whether on sanctions, counterterrorism, cyber, crisis management, or defense capability development, the European Union needs the political will, expertise, and hard military capabilities the United Kingdom brings to the table.

Contrary to many predictions, the remaining EU countries have been unified in exit negotiations with the United Kingdom. Trust in the European Union has remained constant or even increased in 2018. Yet this trust does not necessarily translate to a desire for deeper integration or transfer of sovereignty at the EU level and will be tested in a few short months. 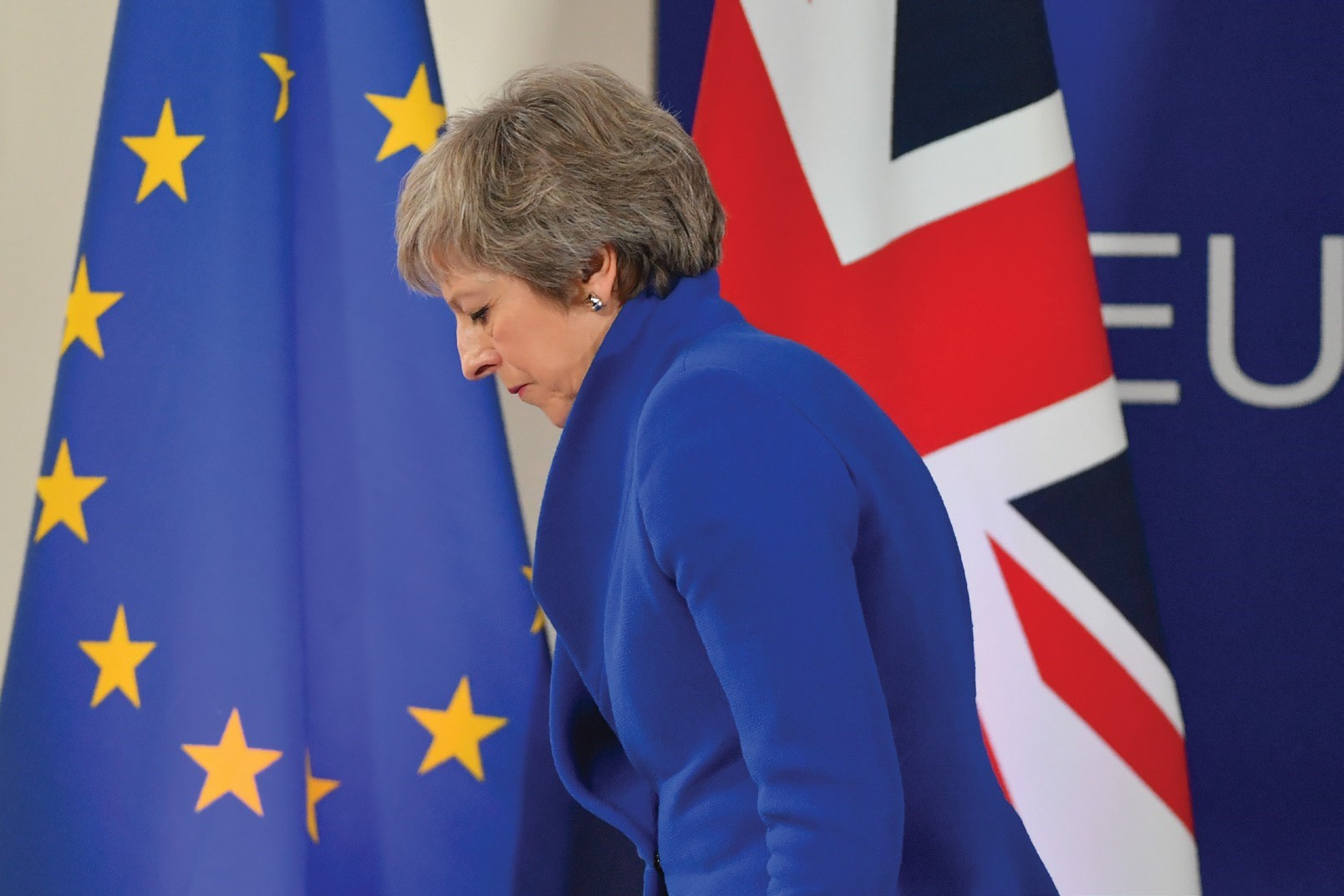 In addition to the European Parliament (EP) elections in May, ten national parliaments are up for reelection, and eight presidential elections are scheduled for 2019.11 In the past few years, many European nations have experienced growing distrust in established political parties and structures. While this discontent has manifested itself  most visibly in events such as Brexit and the gilets jaunes   or Yellow Vest protests in France, it is also unfolding more subtly through elections. Here, it has led to a decline in support for centrist and traditional parties, the emergence of new political parties, and increased support for small/ fringe parties that support nationalistic, protectionist, and Eurosceptic agendas. This  political  fragmentation has greatly delayed government formation as was seen in Germany in 2017 and, most recently, in Sweden where it took four months to form a minority government. The European Parliament and national elections in 2019 will be an important indicator of whether this fragmentation and polarization trend will continue and the effect it will have on European integration, security, and prosperity.

At this point, the two largest party families in the European Parliament—the center-right European People’s Party (EPP) and the center-left Progressive Alliance of Socialists and Democrats (S&D), which have held a majority of seats since 2014, seem likely to fall below 50 percent of seats shared between them. Most recent polls project 180 seats for EPP (around 25 percent) and 134 for S&D (around 19 percent) out of the 705 total EP seats after Brexit.

Increased fragmentation caused by more small party groups, such as the Greens, Liberals (ALDE), and Eurosceptic parties, will make coalition building around new legislation more challenging than in the past. Given the Parliament’s role in passing the EU budget and “confirming” EU Commissions, to include the Commission president, an increase in the number of Eurosceptic and nationalist MPs will complicate the European Union’s ability to tackle divisive issues such as migration or violations against EU rules.

With the leaders of the United Kingdom, France, and Germany weakened by domestic political challenges, the strength and stability of smaller European nations may prove more important than usual. A quick look at the European electoral landscape for 2019 reveals three elements to watch. First, as in the EP elections, an increase in support for nationalist and far-right parties could further erode support for centrist and traditional parties. This risk is highest in non-EU Switzerland where the far-right Swiss People’s Party won 29 percent in the last election but could also be a factor in elections in countries that members of both the European Union and the North Atlantic Treaty Organization (NATO), such as Denmark, Finland, and Belgium. Even in opposition, a visible increase in support of far-right parties typically forces centrist parties to make concessions, such as adopting more anti-immigration, protectionist policies. While not at the national level, state elections in Germany—Saxony (September), Brandenburg (September), and Thuringia (October) will likely see gains by the far-right Alternative für Deutschland (AfD), which polls high in all three East German states (especially in Saxony). The German Green Party, which does not traditionally have a strong profile in the East but has been riding a wave of positive polls regionally and nationwide, could place pressure on the current, grand coalition government under the leadership of Chancellor Merkel. A second factor to watch is the ability of small, opposition parties to unite against incumbent governments. This will be particularly interesting to watch in Poland where, according to the latest polls, the ruling party is leading the main opposition party by somewhere between 11 and 6 percentage points, but should smaller opposition parties join forces, they could gain more than 50 percent of the votes, unseating the current government. Finally, elections beyond the European Union’s borders could present challenges to European security and economic policies, particularly in Ukraine, which holds presidential elections in March and parliamentary elections no later than November. 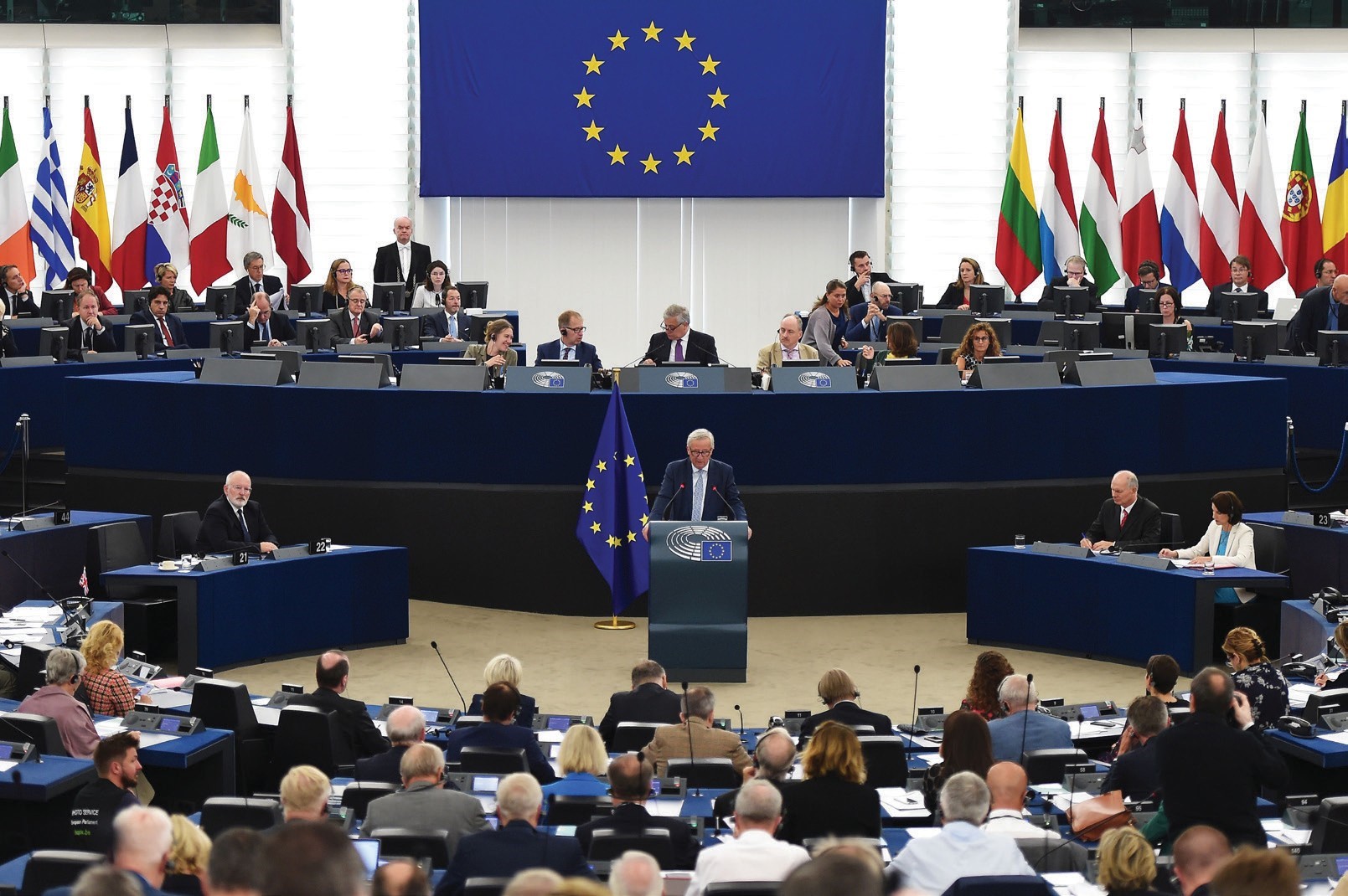 As NATO marks its seventieth anniversary in April 2019, NATO unity and strategic direction will be tested. One such test will be NATO’s unity as the United States has suspended its participation to the INF Treaty and will likely withdraw in August. Recent reports that President Trump has even contemplated a U.S. withdrawal from NATO if nations don’t “pay their fair share” suggest that NATO unity will continue to be challenged. The U.S. Senate will likely have an opportunity to ratify an amended NATO or Washington Treaty to welcome its thirtieth member, the Republic of North Macedonia in the 2019-2020 timeframe.

As NATO marks its seventieth anniversary in April 2019, NATO unity and strategic direction will be tested.

Despite the uncertainty, NATO members continue to implement the significant deliverables agreed to at the July 2018 summit in such areas as NATO Command Structure adaptation, readiness, and military mobility and to demonstrate credible increases to defense spending. NATO members are required to “submit credible national plans” on the implementation of the 2014 Wales Defense Investment Pledge this year. Here, NATO can continue to tell a positive story by maximizing the number of countries with plans; demonstrating continued growth in overall NATO defense spending (which has seen real growth in non-U.S. defense expenditures every year since 2014); increasing the number of countries meeting or moving toward their commitments as outlined in the Wales Pledge; and highlighting significant contributions in terms of operational commitments and capability investments. 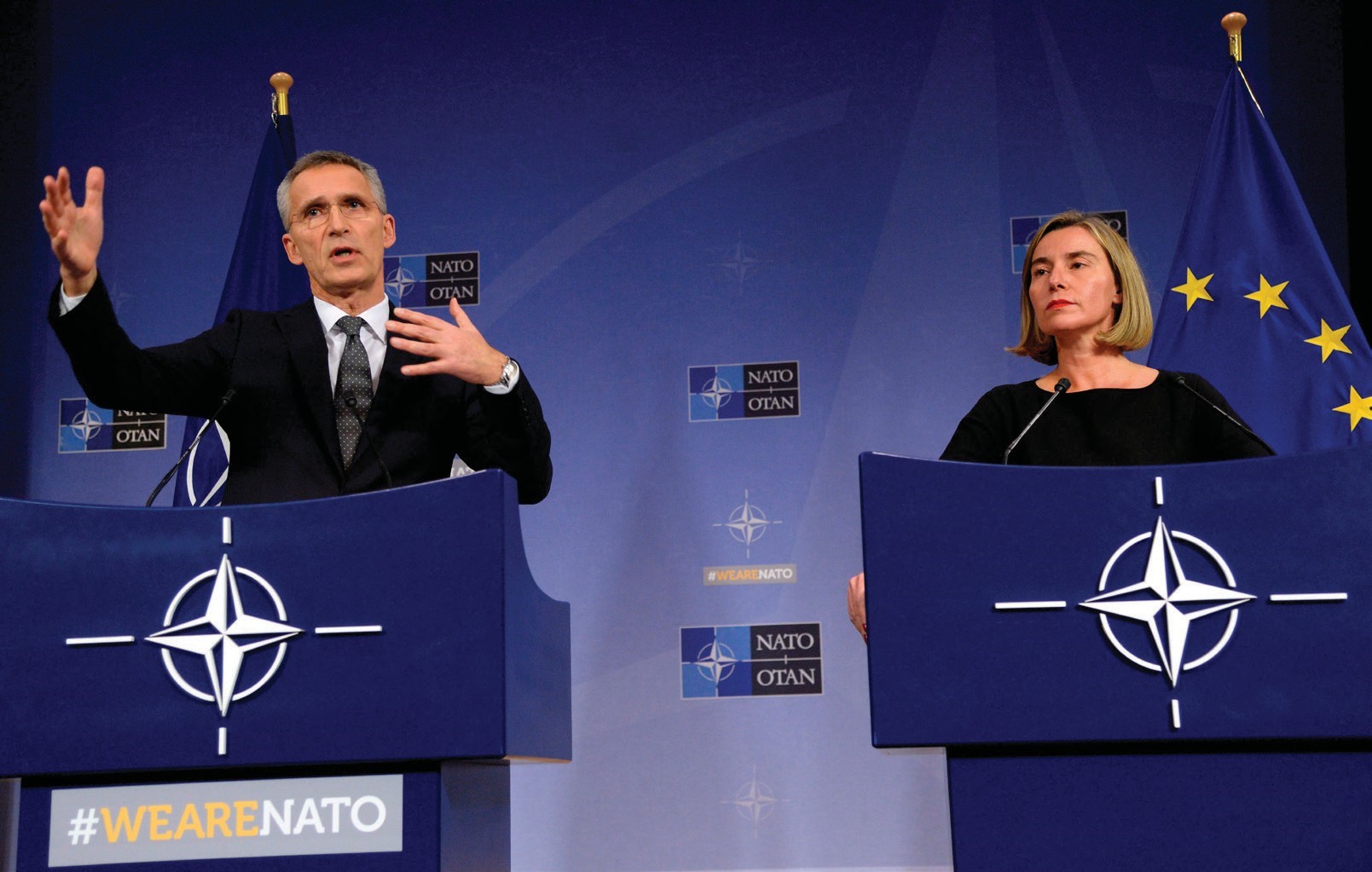 Stronger public focus on NATO is likely for the NATO Foreign Ministers meeting in early April in Washington D.C. to celebrate NATO’s seventieth anniversary. Here, a joint statement reaffirming NATO unity on Russia may top the agenda. NATO will also hold a meeting of Heads of State and Government at the end of 2019, which will likely be the last meeting of its kind chaired by NATO Secretary General Stoltenberg, whose term ends in 2020. It is unclear if President Trump will play as disruptive a role in this year’s NATO summit as he did in 2018, but many allies will be nervous about a repeat performance.

As the European Union endeavors to strengthen its own security and defense identity, 2019 will see negotiations on the European Union’s next budget, the Multiannual Financial Framework (2021-2027), which will be the first EU budget to directly allocate EU funding to defense. It will demonstrate the extent to which EU member states are taking concrete action to step up their defense investment and develop new capabilities. In this context, several important regulations are currently under discussion between the European Parliament and the European Council, regarding the creation of a €13 billion European Defense Fund, the reinforcement of military mobility in Europe, the establishment of a European Peace Facility to fund military or defense activities, and space policy. Ideally, these regulations would be adopted before EP elections in May to allow rapid progress and preserve the momentum on defense policy. Regarding the so-called Permanent Structured Cooperation (PESCO) in the field of defense, new projects launched in December 2018 will start being implemented this year. Ensuring that these new projects are coherent and focused on EU and NATO capability shortfalls will require strong monitoring. Another important dimension will be the identification of criteria for the participation of third parties in PESCO projects, such as the United States and Norway. With Military European Strategic talks (MEST) starting in spring, 2019 should also be the year of consolidation for the European Intervention Initiative (EI2).

U.S.-EU trade talks, which President Trump and President Juncker of the European Commission agreed on in July 2018, will continue well into 2019 with disparate goals on the two sides. The United States aims to reduce its overall trade deficit with the European Union, with cars and car parts an important sector, and to gain better market access for U.S. agricultural and energy products. For its part, the European Union wants to improve market access for non-auto industrial goods and to avoid and repeal tariffs the United States has either threatened (on EU vehicle imports) or introduced (on steel and aluminum). The current European Commission negotiating mandate, which has yet to be agreed by EU member states, focuses on removing tariffs on industrial goods and does not include the agricultural sector, which the U.S. side is keen to include. Against this backdrop as well as the continuation of U.S. tariffs on EU steel and aluminum, successful negotiations are far from guaranteed, as is the future of the World Trade Organization. Such tensions in U.S.-EU trade relations are unhelpful at a time when the two sides which together constitute about $40 trillion in combined GDP, should be working to strengthen global trade rules, coordinate investment screening, and prevent intellectual property theft.

All these developments will take place against a challenging geostrategic backdrop for the United States and Europe. Pressures include competition with Russia and China; continued instability emanating from the Middle East and North Africa; a rise in terrorism and domestic extremism; and an increase in competition below the level of armed conflict that incorporates such elements as disinformation, cyber, and space. On the periphery of NATO and the European Union, the conflict in Ukraine is entering its fifth year with no resolution in sight, and another rise of ethnic tensions in the Western Balkans cannot be discounted, despite the very positive news that the Republic of North Macedonia could be on a path toward NATO and possibly EU membership. Successfully managing these challenges requires functional institutions, strong leadership at the European and national level, and transatlantic unity at a time when all three are under pressure. Yet, the more individual member states and EU institutions are inward-looking and affected by fragmentation, the harder it will be for the European Union and NATO to speak with one voice.

Successfully managing these challenges requires functional institutions, strong leadership at the European and national level, and transatlantic unity at a time when all three are under pressure.

Rachel Ellehuus is deputy director and senior fellow with the Europe Program at the Center for Strategic and International Studies (CSIS) in Washington, D.C. Ricklef Beutin and Quentin Lopinot are visiting fellows with the CSIS Europe Program.

This brief is made possible by general support to CSIS. No direct sponsorship contributed to this report.