The European Union has imposed a partial embargo on Russian crude oil and petroleum products, as well as a ban on shipping insurance for oil exports from Russia. But it may be hard to achieve its goal of taking Russian oil off the market and cutting Russian export revenue without hurting consumers in Europe and elsewhere.

Q1: What is included in the EU sanctions package?

A1: On June 3, the European Union adopted a sixth package of sanctions, including a partial embargo on Russian oil. The sanctions will ban seaborne imports of Russian crude oil as of December 5, 2022, and ban petroleum product imports as of February 5, 2023. Pipeline imports of crude oil and petroleum products will be exempt, in a compromise with EU member states like Hungary, Slovakia, and the Czech Republic, which depend on imports via the Druzhba pipeline. The sanctions package bars those countries from reselling Russian crude oil and petroleum products to other EU member states or elsewhere. The sanctions will allow Bulgaria to continue imports until the end of 2024 and will let Croatia import Russian vacuum gas oil (a refinery feedstock) until the end of 2023. Last year, Russia exported about 3.1 million barrels per day (b/d) of crude oil, natural gas liquids, and refinery feedstocks to Europe, and about 1.3 million b/d in diesel and other petroleum products. It exported approximately 750,000 b/d of crude oil by pipeline and the remainder by tanker.

It took nearly a month of negotiations to achieve unanimous support for this round of sanctions, and a compromise on pipeline imports was unavoidable. But the EU claims that the ban on seaborne imports—as well as Germany and Poland’s voluntary move to halt pipeline imports—will allow it to cut oil imports from Russia by 90 percent. 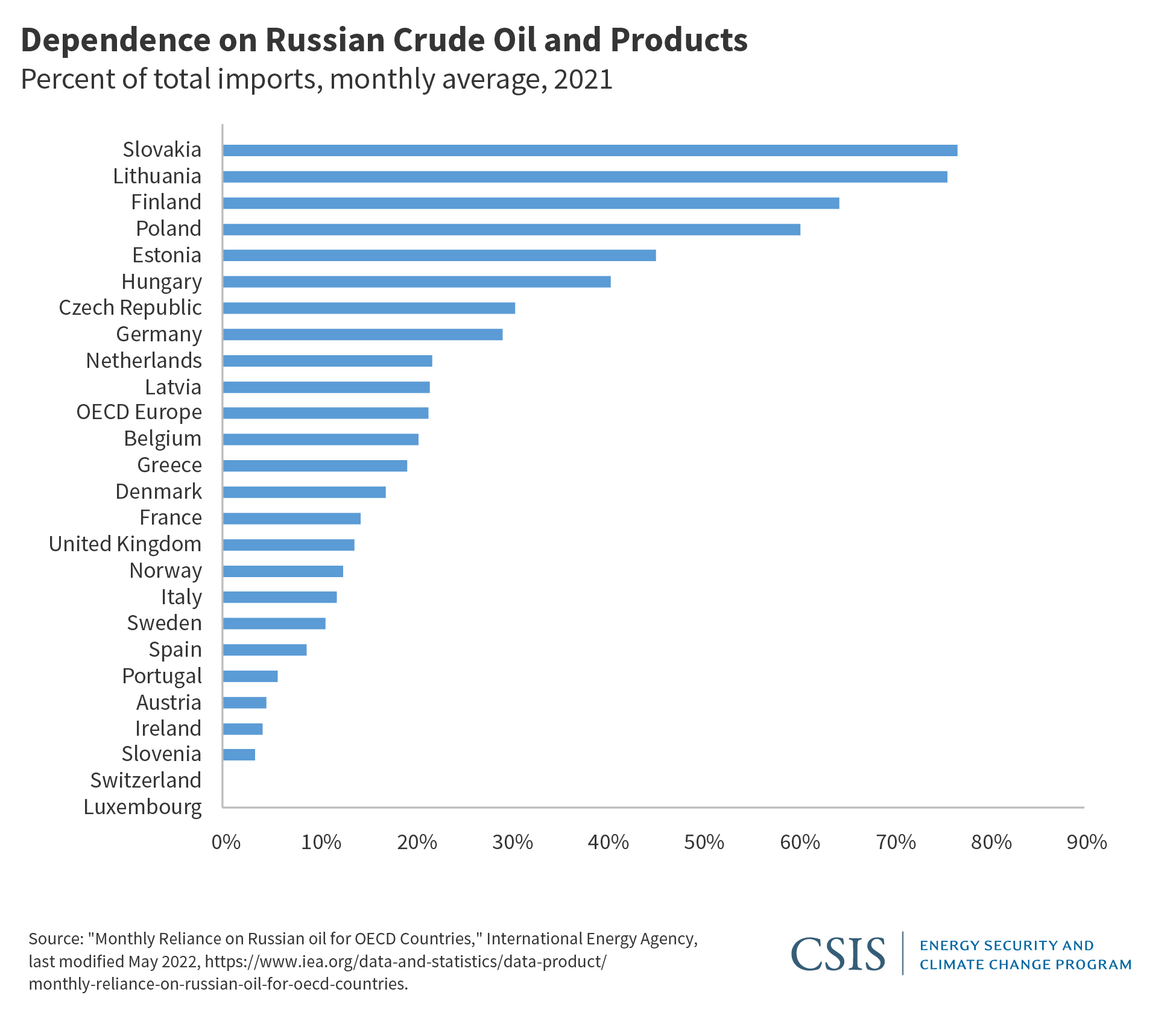 A critical part of the sanctions package (Article 3n) concerns shipping insurance. After a six-month phase in period, EU companies cannot provide “technical assistance, brokering services or financing or financial assistance, related to the transport, including through ship-to-ship transfers, to third countries of crude oil or petroleum products” from Russia. The United Kingdom is expected to follow suit. Cutting off shipping insurance and reinsurance from the European Union and United Kingdom—the heart of the maritime insurance industry—will hinder Russia’s ability to redirect crude oil and petroleum products to other regions. Shipowners will be reluctant to lift Russian cargoes that cannot be insured or reinsured, and such vessels could even be barred from some ports. It is possible that alternative insurance providers in Russia, China, India, or other countries will step up in the coming months to facilitate this trade. But the shipping insurance provision is the most consequential move yet to restrict Russian exports.

A2: Global crude flows are changing quickly. In the past few months, Europe has started to import more oil from the United States, West Africa, and the Middle East. European refiners seeking substitutes for Urals blend could turn to crude oil streams from Norway, Nigeria, Iraq, and the United States, although spot cargoes of many crude oil streams are limited in a tight market. Replacing lost volumes from Russia is no small task, but refiners frequently adjust to changing supply conditions.

The drop in Russian exports in the past two months has been lower than expected. Even as more oil and gas majors and commodity traders have stopped lifting Russian cargoes, the country has been able to sell more volumes to Asia, particularly India. Because there is a phase-in period before the sanctions take place, it is possible that Russian oil exports to Europe will increase in the next six to eight months before the trade becomes illegal. Refiners may have incentives to ramp up imports from Russia—possibly at discounted prices—to build inventories. There are some parallels to the natural gas market. Russian gas flows to Europe actually rose earlier this spring, as countries sought to avoid risks related to currency exchange and payments, and to fill inventories ahead of next winter. 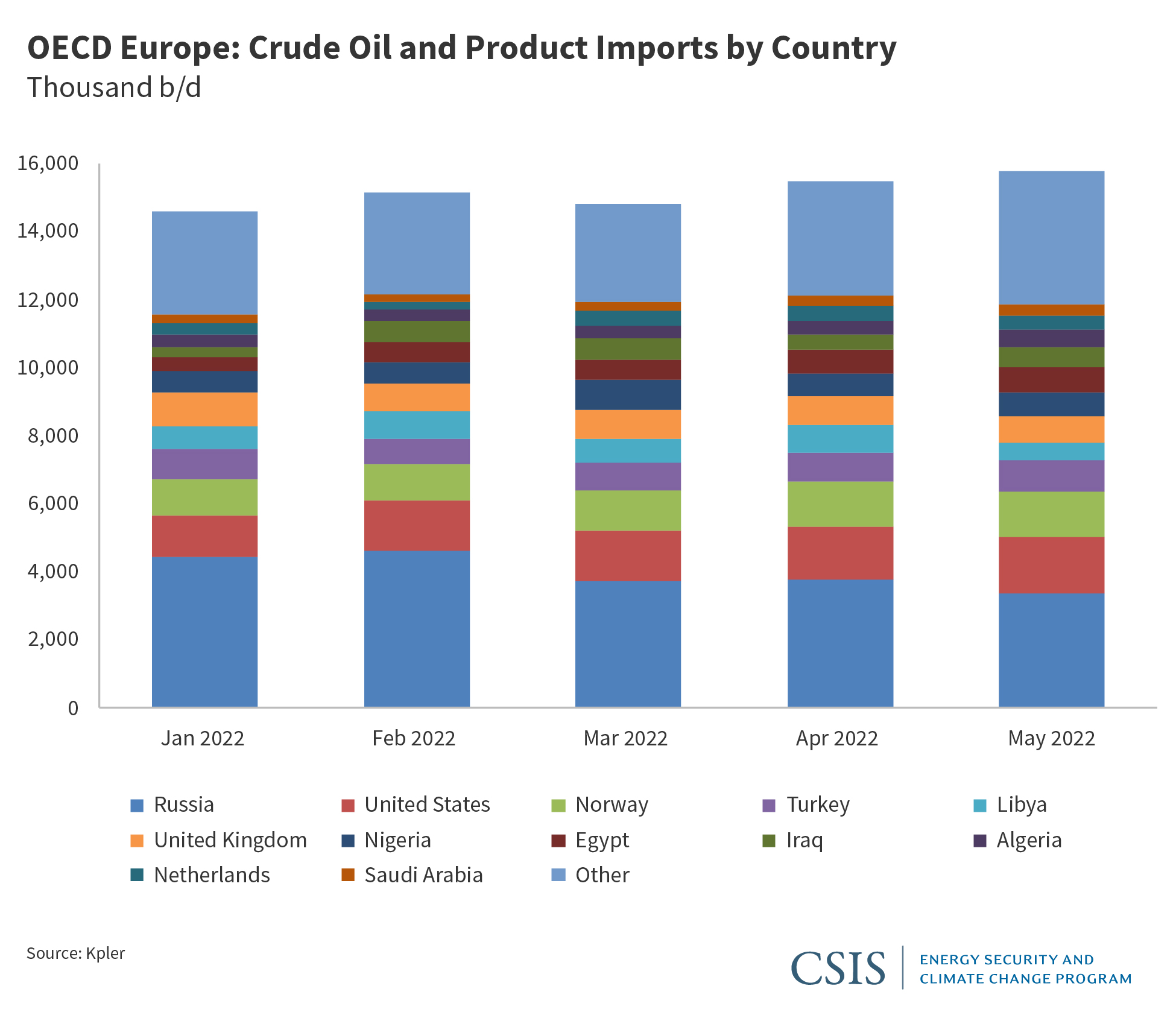 Q3: What does this mean for Russia?

A3: The key question is whether EU sanctions will force Russian oil off the market or simply redirect it to other regions. Russia aims to reorient its oil and gas exports from Europe to Asia, principally India and China. So far it has been relatively successful. India may have imported nearly 800,000 b/d from Russia in May, and could buy even more this month from an extremely low base last year. India depends heavily on oil imports to meet domestic demand, and as a price-sensitive buyer, it has taken advantage of deeply discounted volumes from Russia. Russia has been forced to offer cargoes of Urals blend at $30 to $35 per barrel below Brent crude oil prices. Russian oil exports to China have also picked up, with China importing up to 1.1 million b/d in seaborne volumes last month, compared with a monthly average of around 800,000 b/d last year. Sinopec, Zhenhua Oil, and others appear to be ramping up purchases of Russian crude oil, particularly Russia’s ESPO blend.

There are limits to how much India and China can absorb, and Russia may not be able to redirect all of the roughly 1.6 million b/d in seaborne exports it previously sent to Europe. But Russian exports have proven fairly resilient in recent months, and there is good reason to believe that Indian and Chinese buyers will take advantage of the opportunity to secure discounted crude oil from Russia at a time of high prices.

For now, Russian oil and gas revenue is soaring. The International Energy Agency estimated that in the first four months of this year, Russia’s oil export revenue rose by 50 percent over the previous year, with crude oil and products generating about $20 billion per month. So far, the price effect—higher revenue per barrel, even with discounted Urals and ESPO blend—is outweighing the volume effect of lower exports. Over the years, policymakers have learned to deploy energy sanctions with greater precision. But it is not clear that this round of sanctions will accomplish the stated goal: to deprive Russia of revenue that fuels its war machine, while minimizing the cost to European consumers and the global market.