The European Union is debating an embargo on Russian crude oil and petroleum products, as well as restrictions on the shipping of oil and products from Russia. If approved, the ban will likely include a longer phase-in period for some countries, and Russia will be able to divert some volumes to Asia. But EU measures would force Russia to shut in some production, tightening the oil market and driving up prices.

Q1: What is the European Union proposing?

A1: On May 4, European Commission president Ursula von der Leyen announced the European Union would seek to ban all imports of Russian crude oil within six months and ban petroleum product imports by the end of the year. The European Union may also seek to bar European vessels from transporting Russian oil or conducting ship-to-ship transfers that would enable exports to Europe and all other markets, although those proposals have met resistance. It aims to ban shipping insurance for vessels transporting Russian oil. The United States has already banned oil, petroleum products, and coal imports from Russia. On May 8, G7 leaders pledged to ban imports of Russian oil “in ways that provide time for the world to secure alternative supplies.”

The EU proposal is still under debate and faces opposition from some member states. Countries linked to the Druzhba pipeline system, especially landlocked states with limited access to seaborne imports, have reservations. Brussels, seeking an “orderly” phaseout of Russian oil, has revised the proposed ban in an effort to secure unanimous consent from EU member states. It could allow an extension for Hungary, Slovakia, and the Czech Republic—which depend heavily on imports from Russia—potentially allowing them to continue imports until 2024 or later. Still, resistance from Hungary is blocking the sanctions package. Greece and Cyprus also object to the proposed restrictions on shipping, which could be removed or watered down to ensure approval.

Brussels is concerned that previous rounds of sanctions have failed to knock out more Russian oil, and the European Union is determined to ratchet up the pressure. The International Energy Agency (IEA), major commodity trading houses, and many analysts expected Russian exports to drop by 2 to 3 million barrels per day (b/d) beginning in April, but the actual disruption may have been just half this amount. Most energy trade with Russia is still legal, as long as companies avoid dealing directly with sanctioned Russian entities. Since March, seaborne tanker loadings have been fairly resilient, Indian and Chinese buyers have made some opportunistic moves to buy deeply discounted volumes, and some Russian oil is being stored onshore or on tankers. 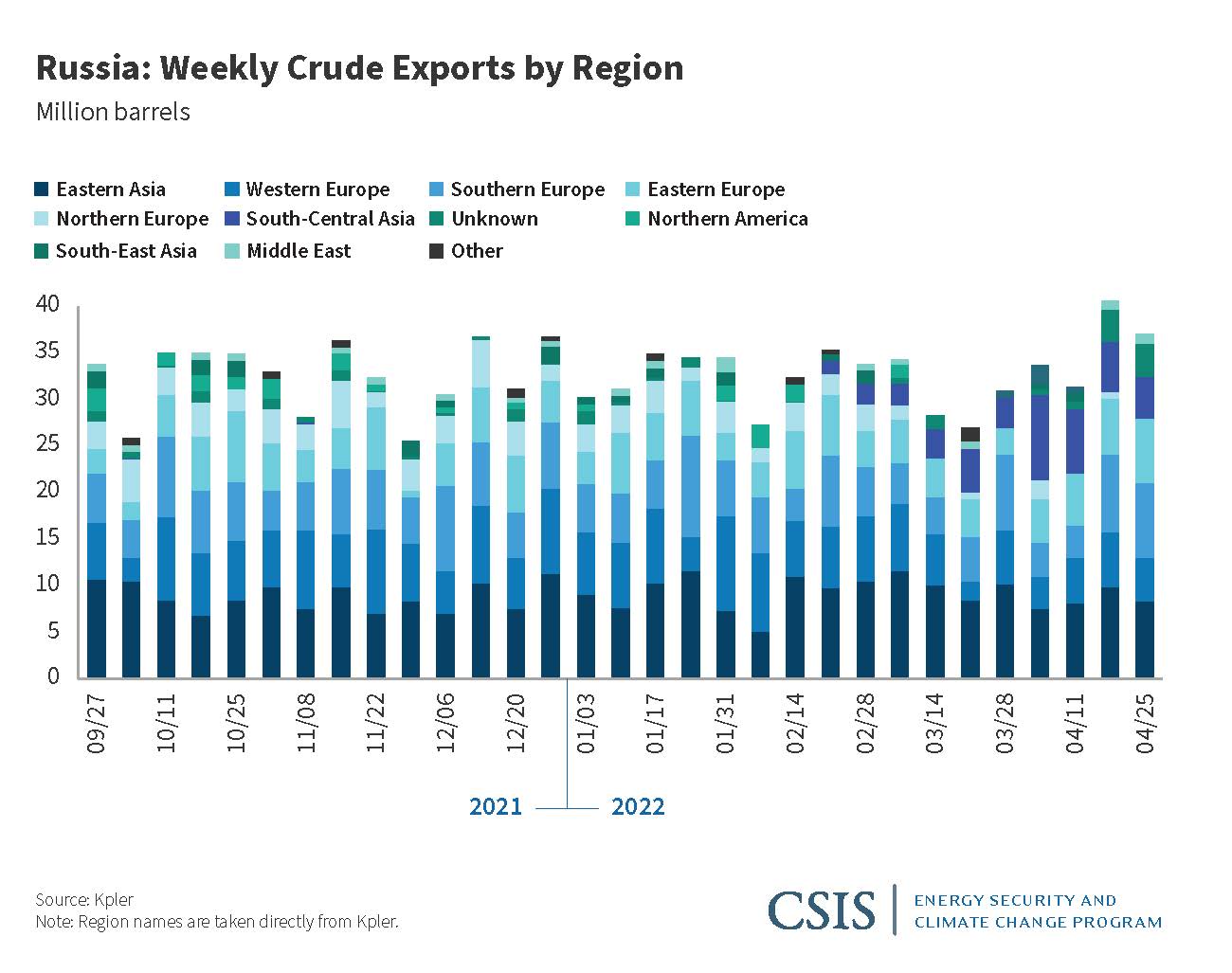 Russia’s exports are likely to decline in May and June, as the impact of “self-sanctioning” by the oil and gas majors, European refiners, commodity traders, and others takes hold. But high oil prices mean that Russia’s oil and gas revenue is rising rather than falling. Policymakers want to choke off this revenue stream.

A2: Some countries are more prepared than others. German officials are newly confident they can eliminate dependence on Russian oil by the end of the year. Germany has sought alternative supplies for its PCK (Schwedt) refinery in the east, including efforts to secure pipeline volumes shipped from the Polish port of Gdansk. Refiners across the continent are importing more crude oil from the United States (including barrels from the Strategic Petroleum Reserve), the Middle East, and North Africa. Longer transit routes, however, will drive up costs for European refiners.

Eliminating Russian crude oil in this timeframe will be challenging for refiners that rely on pipeline imports of Urals (Russia’s main export crude). Hungary, Slovakia, and the Czech Republic may be able to secure access to crude oil via other pipelines transiting Italy or Croatia, but discussions are at an early stage. The European Union may offer some financial assistance to those states to upgrade oil infrastructure.

Petroleum products including diesel present a bigger challenge. Russia typically supplies 40 to 50 percent of Europe’s diesel imports. Diesel prices around the world have risen sharply in recent months due to refinery closures and other factors, and in Europe, refiners now lack semi-refined oil from Russia that is used to produce diesel.

EU policymakers know that an oil embargo on Russia will create economic consequences, and Von der Leyen has warned of the costs. But while individual refiners and companies can adjust, EU policymakers might be underestimating the dislocations in the oil market.

Q3: How much will Russian exports drop?

A3: The key question is whether the embargo will stop Russian oil flows or just redirect them to other markets. Russia is scrambling to find alternative buyers. It has been successful in selling more crude oil to India, which bought up to 700,000 (b/d) last month. State-controlled and independent refiners in China are also buying ESPO blend and Urals crude oil from Russia at a steep discount. But it is no small task to replace Russia’s largest export market, and the shipping and insurance sanctions being debated in Brussels would hinder Russia’s exports to the rest of the world.

First, a European ban on imports would leave Moscow with a big hole to fill. Last year Russia exported about 3.1 million b/d in crude oil, natural gas liquids, and feedstocks to the Europe Organization for Economic Cooperation and Development (OECD), as well as 1.3 million b/d in refined products. Europe accounted for about 60 percent of Russia’s total oil exports. The Druzhba crude oil pipeline alone typically supplies about 750,000 b/d to Europe, with half those volumes flowing to Germany in January.

Second, the proposed restrictions on shipping and tanker insurance present a big obstacle, because Europe is the heart of the oil trading and shipping insurance industries. If maritime insurance providers shun Russia’s oil trade and commodity trading houses wind down their transactions this month as planned, Russia will be left without the key middlemen that enable global oil flows.

The EU measures are unlikely to entirely choke off Russian oil, even within Europe. As seen in the cases of Iran and Venezuela, energy sanctions usually spur traders and buyers to find creative ways to evade such measures. Some illicit trades are bound to occur, given the potential margins in a high-price environment. Enforcement could be challenging for petroleum products, since it is relatively easy to disguise the origin of diesel and other products in storage, for example in the Amsterdam, Rotterdam, and Antwerp (ARA) hub.

Q4: How will the rest of the global oil market adjust?

A4: An EU embargo on one of the world’s largest exporters will inevitably take some oil off the market. If the sanctions begin to bite and shut-in volumes approach the 2 to 3 million b/d level feared several months ago, the recent lull in oil prices will probably end. An already tight market could get even tighter, especially for diesel, barring a significant economic slowdown that drags down oil demand. Despite high oil prices, supply increases from the United States and the Organization of the Petroleum Exporting Countries and allied producers (OPEC+) have been scant. On May 4, OPEC+ again renewed its increasingly stale agreement to add 432,000 b/d to the market each month, although each month it delivers less than the targeted volumes. At the moment, OPEC+ is more concerned about maintaining cohesion rather than making proactive moves to account for Russia’s coming shortfall.

As Russia seeks to reorient its oil and gas flows, Asian buyers—aware of Russia’s limited options—will continue to demand discounts on crude oil and products. The spread between Russia’s Urals blend and Brent crude oil prices has been more than $30 per barrel for the past month. These buyers are well aware that Russia will be competing with other oil exporters that covet market share in China, India, and the rest of Asia—especially the Middle Eastern producers.

If Russia’s war on Ukraine continues until late 2022 and beyond, it will present challenges for OPEC+. So far, the producers’ group has made it clear that Russia is a core part of the group. OPEC+ emphasizes its technocratic role in managing the oil market, rejecting the notion that it should expel or pressure Russia. The group seems determined to maintain the current framework agreement until the supply cuts enacted in April 2020 are fully restored to the market, around September. But by that point it seems likely that Russia’s production will be well below its OPEC+ allocation. An underperforming Russia focused on selling more volumes to Asia—the key source of oil demand growth—will increasingly find itself in direct competition with Gulf producers. If OPEC+ has to craft a new agreement later this year that better reflects real production capacity, Russia and others may lose out to Middle Eastern producers that could add more to the market.

Climate Change , Energy and Sustainability , and Energy and Geopolitics