Report by Donatienne Ruy and Heather A. Conley

Conflict, climate insecurity, and increasingly porous borders have pushed individuals to seek safety and better economic opportunities in Europe, and asylum seeker arrivals peaked in 2015. The European Union and its most impacted member states have struggled to absorb and integrate the largest influx of migrants to Europe since the 1990s. These arrivals have led to a crisis of resources and politics, triggering important shifts in the European Union's foreign policy and development assistance. A forthcoming CSIS report quantifies these shifts through budgetary analysis of the decisions taken at the EU and national level (in Germany, Sweden, and the Netherlands) since 2015 to tackle the crisis. It describes the long-term consequences for the European Union's resources, its role as a foreign policy and soft power actor, and its internal cohesion. But it is not simply a story of funding and borders; it is a story of deepening fissures between Europe’s north and south, and east and west, while unleashing fear-based and xenophobic forces that have been effectively channeled by charismatic political figures. The decisions that European policymakers are taking have altered the European Union's policies, unintendedly altering long-standing European principles and values.

Faced with thousands of people entering the European Union daily for several months in 2015 and 2016,1 European policymakers quickly shifted away from a humanitarian response and a rules-based approach to asylum toward a more restrictive stance on uncontrolled immigration by leveraging humanitarian, development, foreign policy, and security tools to prevent migrants from entering the European Union. The need to reduce incentives for migrants to emigrate to Europe led to adjustments in the European Union's development and security assistance policies toward key origin and transit countries. Unable to reform their internal asylum system to better receive and distribute the influx across Europe—known as the Dublin Regulation, which determines which country is responsible for adjudicating a given asylum application (i.e., the country of first entry, which places a heavy burden on the European Union's southern states)—or strengthen the external borders of the Schengen Area, EU members refused to accept migrants from “front-line” recipient states such as Greece and Italy. EU leaders attempted to close migration paths through the Eastern Mediterranean, but other routes in the Central and Western Mediterranean opened up in 2017 and 2018. Spain has now overtaken both Italy and Greece as the top recipient of migrants arriving via the Mediterranean.2 As the migration burden has continued to fall disproportionately on front-line states, the political discourse surrounding migration has hardened, threatening the European Union's ability to take consensus-based decisions on future migration-related policies. Some countries have experienced outbursts of violence related to migration, from migrant attacks to violent backlash from anti-immigration groups.3 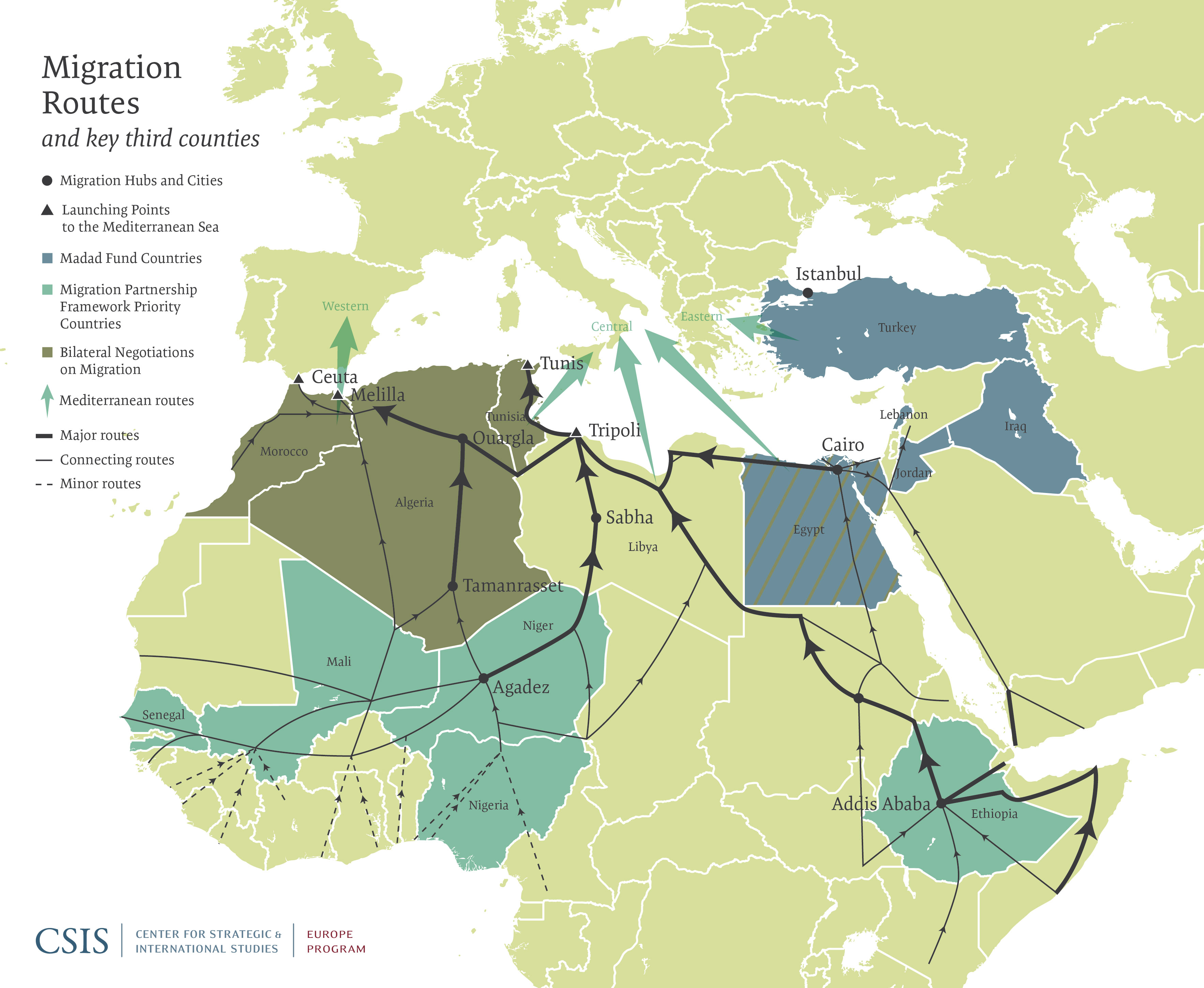 The need to assert greater control over who enters an EU country also translated into more rapid repatriations of asylum seekers whose application was denied (for example, in the case of the agreement between Spain and Germany, this had to be done within 48-hour). This has come at the risk of jeopardizing EU countries’ commitments to the proper treatment of refugees and asylum seekers. Article 3 of the European Convention on Human Rights codified the obligation not to send an individual to a country where they risk being subjected to ill-treatment or torture (refoulement) based on an independent and objective analysis of the country by, for example, the United Nations High Commissioner for Refugees (UNHCR). Recently, the Council of Europe deemed that the Hungarian government did not provide sufficient protections against refoulement when it “pushed back” asylum seekers into Serbia, despite the fact that UNHCR “does not consider Serbia as a safe third country.”4

European policymakers increasingly turned to enlisting the help of third countries to keep migrants as far away from Europe’s borders as possible. The aim has been to prevent migration by mobilizing important financial and material resources through development assistance, crisis management, and training missions for security sectors in countries of origin or transit. Diplomatic efforts have increased dramatically as well. German Chancellor Angela Merkel has traveled to several African countries that have sent thousands of asylum seekers to Germany and has hosted leaders from Angola, Niger, and Ghana in Berlin;5 Germany has increased its force presence in Mali to over 1,000 troops; and Austria, through its rotating presidency of the Council, will host an EU-Africa Summit in December to highlight the European Union's renewed efforts to “work more closely together with the African states.”6

The aim has been to prevent migration by mobilizing important f inancial and material resources through development assistance, crisis management, and training missions for security sectors in countries of origin or transit.

A flurry of policy propositions has been advanced, so far, to little effect. The establishment of various kinds of centers to process asylum seekers will not materially alleviate the negative impact of the migration crisis. These have ranged from “disembarkation platforms” in countries outside of the European Union to identify refugees and economic migrants (which would likely not receive asylum in Europe)7 to “control centers” on the border between EU countries to determine the country of asylum request (to quickly return that individual to that country). Although Germany has negotiated bilateral agreements with some non-EU countries on repatriation and increased development aid (Algeria, Egypt, and Tunisia),8 these centers will likely not materialize as no non-EU country has yet agreed to host them. Existing national border infrastructure—instead of newly constructed centers—is currently used to increase the pace of asylum request processing, such as on the German-Austria border. But like the announcement of a rapidly expanding EU border guard, political announcements are designed to temporarily allay the growing anger that seeks to end uncontrolled migration to the European Union without offering real, long-term solutions.

A refugee and migrant hotspot on the Greek island of Samos 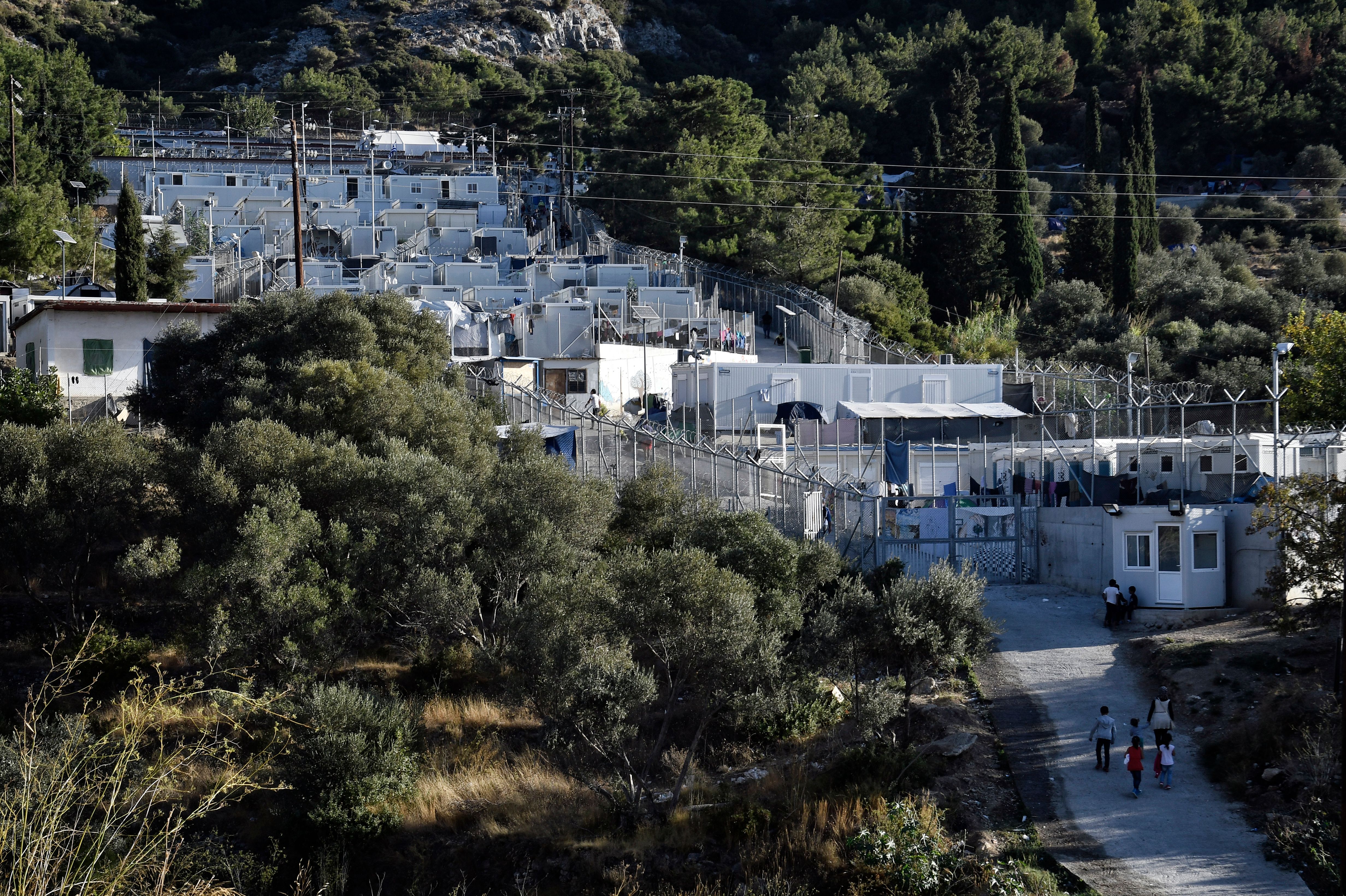 Can the Seas Be Calmed?

These factors clearly reflect a policy transformation, i.e., the centrality of the migration issue at the EU and national level. This is visible in the increases and reallocation of funds across budget lines that have taken place since 2015 to address the crisis (revealing shifting priorities) and a rapid draining of emergency reserves within already-tight budgets (especially at EU level where there is a balanced budget requirement). This included: 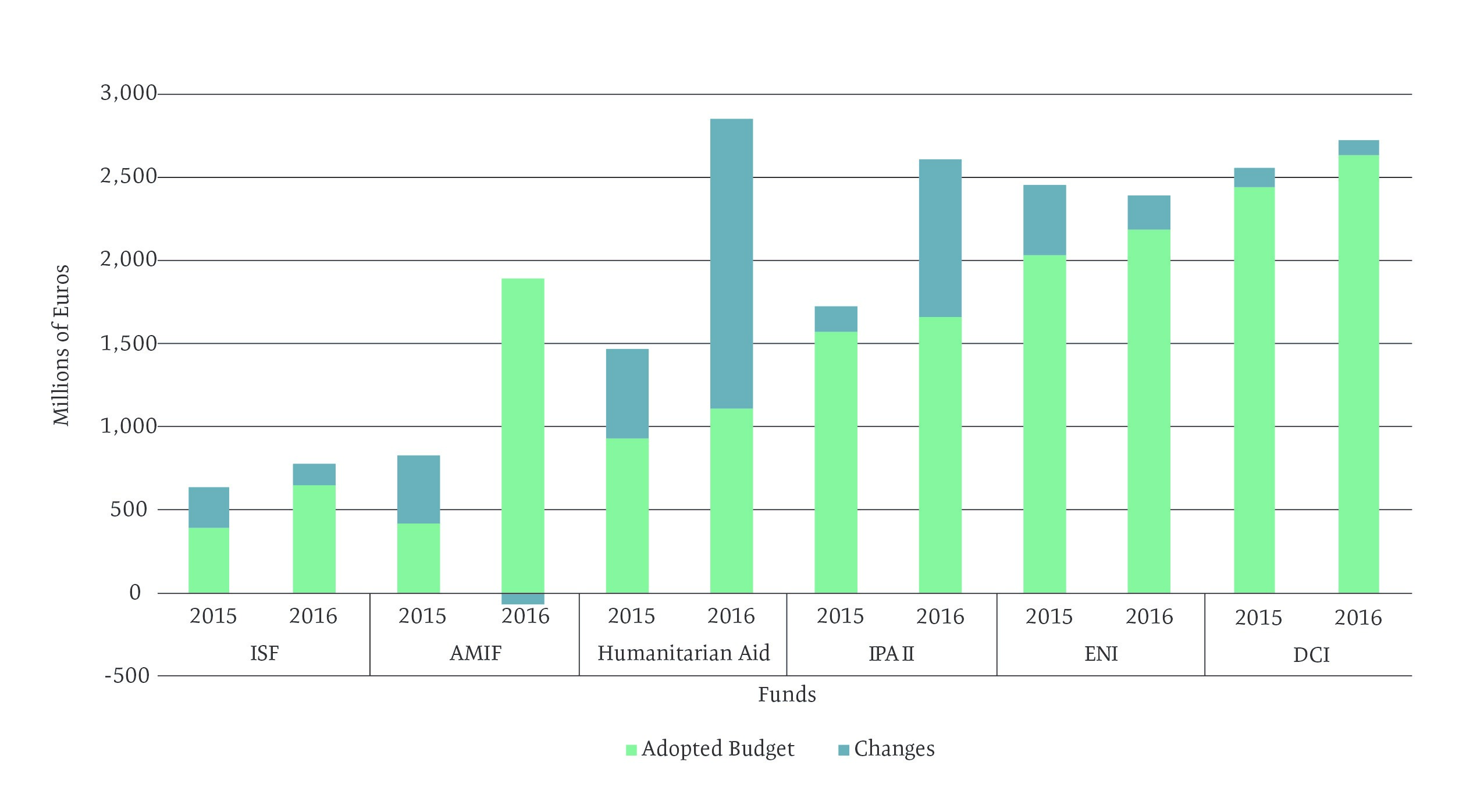 The European Union's €6 billion outlay to Turkey, which helped stop the largest flow of migrants in 2016, was the most striking example of a massive funding decision prompted by the crisis. Due to its success in decreasing arrivals, EU policymakers have tried to strike similar (though less generous) agreements with third countries despite some concerns over rule-of-law and safety conditions on the ground, such as in Libya.15

Another transformation was the European Union's efforts to turn its small and poorly-funded border agency, Frontex, into a much more significant terrestrial and maritime presence. The European Border and Coast Guard Agency will likely continue to struggle with hiring the necessary staff to meet the demands of a greater border presence, but it has received an impressive funding boost and is certainly the recipient of much political attention. It will also face jurisdictional challenges, as controversy is growing among EU members as to whether nations should cede sovereign control over borders to Frontex. The most extreme example was Hungarian Prime Minister Viktor Orban, who has complained that the European Union would use Hungary as “a house of passage [or] a reception camp” and that it was trying to take away Hungary’s right to defend its own borders.16

The third and future transformation will likely be found in the structure and levels of the European Union's next Multiannual Financial Framework (MFF, its multi-year budget) for 2021-2027. For this upcoming cycle, the Commission has proposed the inclusion of migrant reception levels in the criteria for providing generous regional and cohesion funds—designed to reduce regional disparities within the European Union, particularly for Central and Eastern European countries, which receive a significant portion of these funds while refusing to accept migrants. There are also plans to reshuffle and collapse multiple EU instruments dedicated to actions carried out abroad (from diplomacy with neighboring countries to crisis response and development assistance) and to grant a 26 percent boost in funding for these instruments.17 Though this might help harmonize foreign policy at the EU level, there is a clear risk that migration management will consume other important development goals (such as gender equality and the Sustainable Development Goals), and reduce the European Union's global development portfolio.18 This risk already materialized in 2017 when the Commission requested a €225 million boost for security, confidence building and conflict prevention for Mediterranean littoral states (within the Neighborhood Instrument), while it decreased the budget allocated to poverty reduction and sustainable development in these countries.19

But more than policy changes, it is the politics of the migration crisis that is currently consuming EU governments and political leaders. Anti-immigration governments, parties, and policies are ascendant across Europe, reinforcing the political imperative of border control above all other measures. The political crisis has paralyzed EU decisionmaking on reforming the asylum system and overwhelmed all other pressing agenda items, such as Brexit negotiations and Eurozone reform.

Domestic political stability has been shaken as well. National governments now take a painstakingly long time to form after elections (in coalition systems) as traditional parties disagree on how to handle migration or how to deal with extreme anti-immigrant parties that are increasingly popular at the polls, thus gaining parliamentary power. Germany’s “Grand Coalition” took six months to form; the largest (and growing) opposition party in parliament is an anti-immigrant party; and the stability of the current government was directly challenged by a coalition partner that threatened to leave the coalition if Chancellor Merkel did not adopt a harder stance on immigration,20 which prompted the development of the “control centers.” Government formation in Sweden will follow the slow and difficult path of the German government, after an inconclusive election on September 9, 2018.

The political crisis has paralyzed EU decisionmaking on reforming the asylum system and overwhelmed all other pressing agenda items, such as Brexit negotiations and Eurozone reform.

In 2015, the European Union was caught off-guard by a migration crisis it could have foreseen, given that migration levels to Europe had steadily increased since 2007. In 2018, the number of migrants reaching Europe has receded, but the politics of migration has continued to sour and has completely enveloped Europe. It has propelled it to pursue, at great cost, policies that are responsive to the calls of extreme political forces, shifting Europe’s political spectrum to the right and undermining the values on which the European Union rests. Should these anti-immigrant, Euroskeptic forces gain more support in 2019, these shifts in politics and policies will shape the political contours of the next European Parliament and European Commission. The 2015 migration crisis has not only transformed how the European Union and select member states fund and prioritize development assistance policies; it appears to have re-programmed Europe’s “operating system” of values and norms at an incalculable cost.

Heather A. Conley is senior vice president for Europe, Eurasia, and the Arctic and director of the Europe Program at the Center for Strategic and International Studies (CSIS). Donatienne Ruy is a research associate with the CSIS Europe Program.