The Evening: Assange Arrested, Sudan Situation, Not Fade Away and More

The United States has charged WikiLeaks founder Julian Assange of conspiring to hack a computer as part of the 2010 release of reams of secret American documents, according to an indictment unsealed Thursday, putting him just one flight away from being in American custody after years of seclusion in the Ecuadorean embassy in London. Assange has been living at the Ecuadorean Embassy in London since 2012. British authorities arrested him today, as the NYT’s Eileen Sullivan and Richard Pérez-Peña report.

Dive Deeper: “What Is Extradition?” by CFR’s Jonathan Masters.

President Trump said on Thursday he would leave sanctions in place on North Korea as he and South Korean President Moon Jae-in discussed ways to get U.S.-North Korea nuclear talks back on track after a failed summit in Hanoi, as Reuters’ Roberta Rampton and Soyoung Kim report.

Army officers in Sudan ousted President Omar al-Bashir on Thursday after months of street protests, but demonstrators quickly rejected a transition plan that called for a transitional body to hold power for the next two years, as Foreign Policy’s Robbie Gamer, Justin Lynch and Jefcoate O’Donnell report.

In 2017, China netted a global trade surplus of over $400 billion. The majority of China’s surplus comes from trade with the U.S. and Hong Kong. Excluding trade with those two partners, China exported $1.7 trillion and imported $1.6 trillion worth of goods.

“This is unlawful, I’m not leaving.” 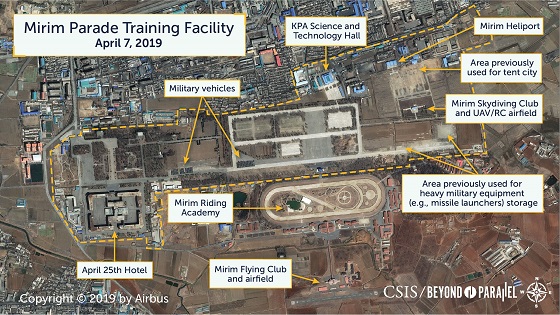 New satellite imagery from CSIS's Beyond Parallel indicates that North Korea may be preparing for an upcoming military parade. Although North Korea often holds parades to showcase new weapons, in the aftermath of the Hanoi summit this may symbolize a return to a more hardline stance against denuclearization. 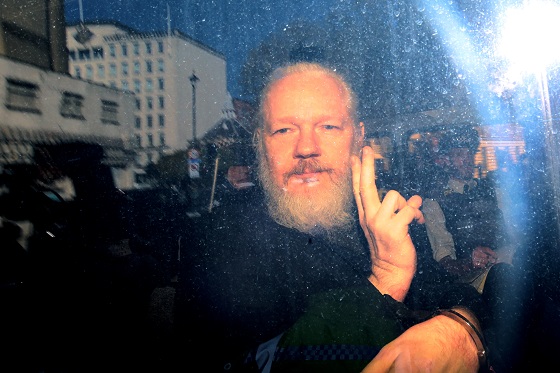 (Photo credit: Jack Taylor/Getty Images). Julian Assange gestures to the media from a police vehicle on his arrival at Westminster Magistrates court on April 11, 2019 in London, England.

“We just witnessed a watershed Israeli election,” by CSIS’s Jon Alterman for the Hill.

At 5:30 p.m., join CSIS for an event commemorating the 85th anniversary of U.S. membership to the International Labour Organization, featuring remarks from U.S. Secretary of Labor Alexander Acosta.

And, at 10:00 a.m., the Brookings Institution will hold a discussion on trends in emerging technologies and how robots, AI, and automation will affect the workforce.

Then, at 12:30 p.m., the Peterson Institute will host a conversation with Olaf Scholz, German federal minister of finance and vice chancellor, on US-European relations and the importance of a values-based transatlantic partnership.

In the latest The Trade Guys episode, Bill, Scott, and Andrew welcome another VIP guest. Kirsten Hillman, Canada’s deputy ambassador to the United States, offers her insight on Section 232 steel and aluminum tariffs, the USMCA, and more.

So if Bob Dylan is most everybody’s musical hero, who is Dylan’s hero? Well, we know about Woody Guthrie. But when Dylan accepted his 2016 Nobel Prize for Literature, he said that he “got to wondering exactly how my songs related to literature.”

Here’s how he explained it in his Nobel Lecture: “If I was to go back to the dawning of it all, I guess I’d have to start with Buddy Holly. Buddy died when I was about eighteen and he was twenty-two. From the moment I first heard him, I felt akin. I felt related, like he was an older brother. I even thought I resembled him. Buddy played the music that I loved—the music I grew up on: country western, rock ‘n’ roll, and rhythm and blues. Three separate strands of music that he intertwined and infused into one genre. One brand.”