“China's Strength Is in Making the West Doubt the Value of Doubt,” by Chatham House’s Kerry Brown.

Iran announced today that it had completed a new centrifuge assembly center at the Natanz nuclear site, in a first step to increasing its enrichment capacity, as the New York Times’ Thomas Erdbrink reports.

Plus, a Russian troop deployment in Syria near the Lebanese border this week caused friction with Iran-backed forces including Hezbollah which objected to the uncoordinated move, as Reuters’ Laila Bassam and Tom Perry report.

And, as the Journal’s Asa Fitch and Ian Talley report, dozens of major American companies are preparing to pull out of Iran as the Trump administration closes a narrow legal window that has allowed firms to operate there without violating U.S. sanctions.

The White House announced today that President Trump will meet North Korea's Kim Jong Un next week at the Capella hotel on the resort island of Sentosa, just off the southern coast of Singapore, as the Washington Post’s David Nakamura and John Hudson report.

Dive Deeper : “Next Steps on U.S. Policy Toward North Korea,” testimony before the Senate Committee on Foreign Relations Subcommittee on East Asia, the Pacific, and International Cybersecurity Policy by CSIS’s Victor Cha.

“North Korean Human Rights and the Singapore Summit—a Goal or a Tool?” by CSIS’s Robert King.

Mexico imposed tariffs on U.S. imports including bourbon, apples, potatoes, cheese and pork in retaliation to the Trump administration’s levies on steel and aluminum, as the FT reports . 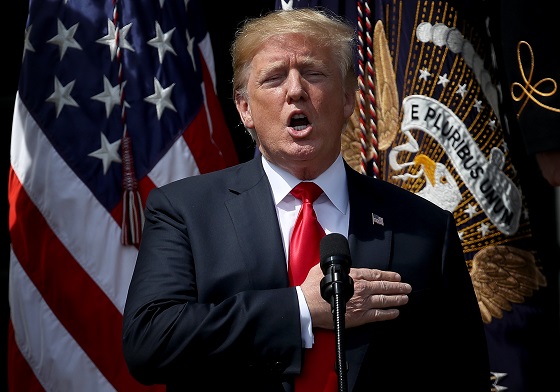 “Religion and Violence in Russia,” by CSIS’s Olga Oliker.

Join CSIS at 11:00 a.m. for a discussion on the study of military history and its impact on the modern citizen and statesman.

At 2:00 p.m., join CSIS for a conversation on the launch of the 12th edition of the Global Peace Index (GPI), which helps identify and measure the attitudes, institutions, and structures that build a more peaceful society.

At 6:00 p.m., join CSIS for a U.S. debut screening of “All for One, One for All,” a collaborative documentary produced by filmmakers with disabilities from Russia and the U.S.

And on June 12 at 4:00 p.m., join CSIS for a discussion on the evolution of U.S. Feed the Future initiatives, featuring Representatives Betty McCollum (D-MN) and Chris Smith (R-NJ), as well as other distinguished panelists.

Around the world, governments are using a variety of approaches—ranging from controlling the media, creating onerous registration requirements, and passing restrictive legislation to cut off foreign funding, to depriving human rights activists of their nationality, detaining civil society leaders, and in some cases, engaging in targeted killing—to limit the space for civil society to operate. Watch a new explainer video on civil society from the CSIS Human Rights Initiative.

North Korea is the impossible state. For over 45 years no American president has figured it out. Now, the stakes may be higher than ever as Donald Trump and the Trump administration come to the negotiating table. Each week join the people who know the most about North Korea—CSIS's Victor Cha, Mike Green, and Sue Mi Terry—for an insider’s discussion with host H. Andrew Schwartz (that's me) about the United States’ top national security priority. Listen to the trailer here.

Rock and Roll FM radio was once a primary mover of American culture and in cities all over this land it provided a sense of community. Radio in general still reaches a large audience, about 54 percent of the U.S. population daily according to Statista, but it’s fragmented, with news/talk radio taking up a big listenership.

Rock stations are still important in some places—I love listening to FM rock radio in Los Angeles or Cleveland for example. It’s still soulful in those cities and it still feels like the radio stations know their audience. But in DC, rock radio is dead. I now listen to Spotify and to Sirius XM with all of its specialized channels.

Growing up in DC, the big rock radio stations were DC 101 and WHFS. They provided the soundtrack of our lives. And Tuesdays, were always “Two for Tuesdays” on DC 101. As in, “Sweet Home Alabama” and “Free Bird” from Skynyrd or “Black Dog” and “Stairway to Heaven” from Zeppelin.

So in that spirit, let’s do two from The Who: