The Evening CSIS: Mother of all Bombs, North Korea, Ramble On and More


Mother of All Bombs

The US military today defended its decision to drop its most powerful nonnuclear bomb on ISIS positions in Afghanistan, describing it as a “tactical” move, as CNN’s James Griffiths, Barbara Starr, and Angela Dewan report.

US and Afghan forces today were on the ground assessing the damage cause by the bomb, as the Wall Street Journal’s Jessica Donati and Habib Khan Totakhil report.

Dive Deeper: See more on the GBU-43/B “Mother of All Bombs” from GlobalSecurity.org.

China issued a stern warning today to both the United States and North Korea, urging them not to push their recriminations to a point of no return and allow war to break out on the Korean peninsula, as the Washington Post’s Anna Fifield reports.

In an interview with CBS News correspondent Ben Tracy today, North Korea’s vice minister of foreign affairs, Han Song Ryol, accused the Trump administration of wanting to “annihilate” the regime and said they are ready to launch a “pre-emptive strike” if the US threatens to attack their country. He also said their nuclear program was nonnegotiable.

And “ A Menu of Imperfect Strategic Options for South Korea ” by CFR’s Scott Snyder.

Next week Commerce Secretary Wilbur Ross will meet with his Japanese counterpart, Hiroshige Seko, on an upcoming trip to Japan for a discussion expected to include trade imbalances, as the Nikkei Asian Review reports.

The number of fake France-based accounts that Facebook took action against this week to help reduce the spread of material generated through inauthentic activity, including spam, misinformation, or other deceptive content. Source: Facebook.

“In short, it’s not time to panic or to bluster, but stay focused on moving away from a shaky nuclear precipice.”

—CSIS’s Sharon Squassoni penned an op-ed in teen Vogue today, “ What You Should Know About North Korea and Their Nuclear Weapons Threats .” 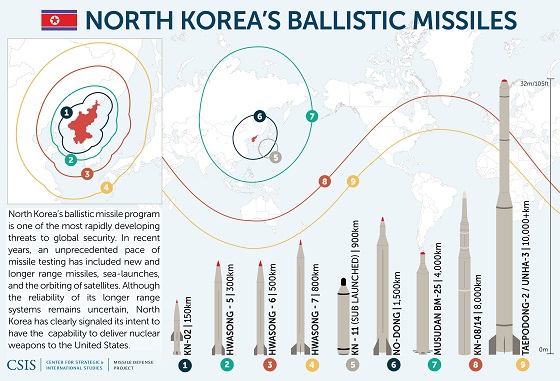 CSIS’s interactive MissileThreat micro-website is an authoritative source of information and analysis about ballistic and cruise missiles around the globe and the systems designed to defend against them. As tensions rise on the Korean peninsula, check out MissileThreat ’s feature on North Korea’s missile program. 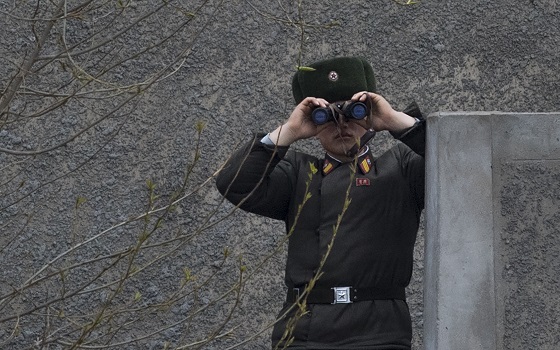 (Photo Credit: JOHANNES EISELE/AFP/Getty Images.)
A North Korean soldier uses his binoculars to look across the Yalu river near Sinuiju, opposite the Chinese border city of Dandong today.

“ Inside Turkey’s Purge ” by Suzy Hansen for the New York Times Magazine.

Join CSIS’s Russia and Eurasia Program at 10:00 a.m. for a discussion on “ Russia in the Global Arms Market.”

And join the Woodrow Wilson Center at 10:00 a.m. for a discussion of Brazil’s plans to reduce isolation and increase the country’s integration with the global economy.

Earlier this week, CSIS launched Dr. Michael J. Green’s new book By More than Providence: Grand Strategy and American Power in the Asia Pacific since 1783 , featuring a discussion with Dr. Green, Dr. Kurt Campbell, and Robert Zoellick. You can watch the event on demand here.

Today, CSIS’s ChinaPower Podcast released a new episode, “The Inaugural Trump-Xi Summit: A Conversation with Ely Ratner.” You can listen on iTunes or SoundCloud.

I’ve really enjoyed discussing Led Zeppelin with you all this week. I received a note from a student at Yale today that just made my day—I love that the current generation finds such value in Zeppelin’s music. It bodes well for the future of rock ‘n’ roll.

Meanwhile, Led Zep could go on tour now with Jason Bonham subbing for his dad and sell out every arena across the globe. Alas, Robert Plant doesn’t want to.

But one night in 2007, Zeppelin gave us a hint as to what it would look and sound like if they were to tour again. Performing in London’s O2 Arena in tribute to the late Atlantic Records chairman Ahmet Ertegun, Led Zeppelin ran through a set of their classics. It’s been captured on a film called “ Celebration Day ,” which thankfully allows the world to see Led Zeppelin roar for what could be one final time. I invite you to email me at aschwartz@csis.org and follow me on twitter @handrewschwartz