The Senate will vote Wednesday on overriding President Barack Obama’s veto of a bill allowing families of 9/11 victims to sue Saudi Arabia, according to Majority Leader Mitch McConnell (R-KY). A House vote has not yet been scheduled. It would be the first veto override of Obama’s presidency, as the Associated Press reports.

Secretary of State John Kerry defended his efforts to negotiate with Moscow over the war in Syria today, despite the collapse of a cease-fire that has led to a massive Russian-backed assault on the besieged rebel-held sector of Aleppo. The New York Times’ Rick Gladstone and Somini Sengupta have this report on the grim situation in Aleppo.

Also see CFR’s interactive on the “Civil War in Syria .”

Chinese Firm Charged by US

US prosecutors charged four Chinese individuals and a Chinese company with conspiring to evade US economic sanctions on North Korea by establishing a web of shell companies that funneled hundreds of millions of dollars through the US financial system, as the Financial Times’ David Lynch reports.

Dive Deeper: CSIS’s micro-website Beyond Parallel examines North Korea and its motivations in an interactive format.

“The United States is the major global military power, but it now faces a world in which it can—at best—exert sustained influence, and cannot possibly control the end state of a given conflict it is involved in. In the real world, conflict termination almost never has an ‘end state.’” 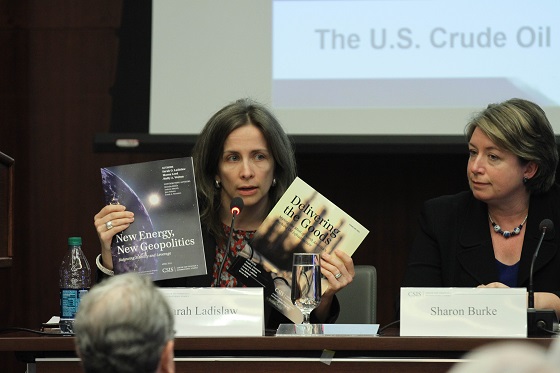 Sarah Ladislaw is the director of CSIS’s Energy and National Security Program. Sarah previously served in the Office of the Americas in the Department of Energy’s Office of Policy and International Affairs, where she covered a range of economic, political, and energy issues in North America, the Andean region, and Brazil. Sarah authored a new commentary on Friday, “The Case for Strategic Multilateral Engagement on Low-Carbon Development in India.”

I loved Arnold Palmer and I bet you did too. Shown here, he watches his ceremonial first tee shot to start the 2011 Masters in Augusta.

Join CSIS’s Proliferation Prevention Program at 9:30 a.m. for “Nuclear Issues at the United Nations: What’s Next?”

Join CSIS’s Transnational Threats Project and Africa Program at 1:30 p.m. for “Militancy and the Arc of Instability: Violent Extremism in the Sahel.”

Join CSIS’s Scholl Chair in International Business and Freeman Chair in China Studies at 3:30 p.m. for a book launch of Developing China: The Remarkable Impact of Foreign Direct Investment by Michael Enright.

And join us tomorrow at 5:00 p.m. for the book launch of Doomed to Cooperate by Dr. Siegfried Hecker.

And join the Atlantic Council at 11:15 a.m. for “Saving Syrians: A Discussion with Raed al-Saleh, Head of the White Helmets.”

Listen to the latest podcast from Russian Roulette, "Of Ceasefires and Successions.”

In case you didn’t see this, Snapchat is going to roll out video-sharing sunglasses.

Someone who made me smile a lot passed away this weekend. Well, two people did. Arnold Palmer. My grandfather loved Arnold Palmer, so did my dad and I did too. Who didn’t? He always made you smile.

Another guy like that who is less well known left us this weekend, too. Stanley Dural, Jr., also known as Buckwheat Zydeco died Saturday in his hometown of Lafayette, Louisiana.

Buck was one of the greatest Zydeco musicians who ever lived. Most Zydeco music experts believe he is only eclipsed by his mentor, Clifton Chenier. Chenier practically invented the genre, but it was Buck who brought it mainstream.

Simply put, Buckwheat Zydeco was one of the most electrifying performers I have ever seen and he always made me smile. And dance. And smile again.

Clifton Chenier’s son, the incredible C.J. Chenier and his Red Hot Louisiana Band performed at my wedding. C.J. blew the doors down with music that kept everyone on the dance floor all night. Why C.J. and not Buckwheat Zydeco you ask? Well, Buck was already booked for that night of course!

Buckwheat Zydeco was an incredible musician who made people smile everywhere he went with sounds and performances like this one.