The Evening: Facebook Fall, Brexit, Workin’ For MCA and More

Facebook’s shares were on track for their worst fall in more than five years today, dropping 7 per cent and wiping about $35bn off the market value of the world’s largest social network as a backlash intensified over claims it had been used to harvest the data of millions of U.S. voters, as the FT reports.

Dive Deeper: “The Monetization and Illicit Use of Stolen Data,” a testimony from CSIS’s James Lewis before the House Committee on Financial Services Subcommittee on Terrorism and Illicit Finance.

The Trump administration today banned all use by Americans of Venezuelan cryptocurrency, saying that its introduction is intended to skirt U.S. sanctions. In a separate move, the administration also slapped sanctions on four current and former senior Venezuelan officials accused of corruption and mismanagement, as the AP’s Matt Lee reports.

Dive Deeper: “Can Trump Succeed at the Summit of the Americas?” via Ben Raderstorf of the Inter-American Dialogue.

European Union and British negotiators today agreed on the terms of the U.K.’s 21-month transition after it leaves the bloc next March, but left unresolved a thorny issue—the future of Ireland—that could derail the entire Brexit deal, as the Wall Street Journal’s Valentina Pop reports.

The UK and the EU have agreed terms for a 21-month transition after Brexit.
Source: FT.

“Saudi Arabia does not want to acquire any nuclear bomb, but without a doubt if Iran developed a nuclear bomb, we will follow suit as soon as possible.”

CSIS’s Kremlin Playbook podcast has been nominated as a Shorty Award finalist in the "Best Branded Podcast" category. You can listen here, on Apple Podcasts or SoundCloud. 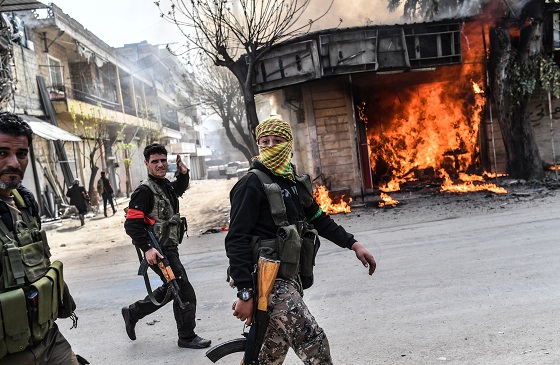 Join CSIS at 4:00 p.m. for a keynote address from Chen Chu, Mayor of Kaohsiung, Taiwan, on the transformation of Taiwan and Kaohsiung over the last few decades.

And, at 1:00 p.m., join the Atlantic Council for "Surfing the Strait: China, Taiwan, and Twitter," a discussion on the rise of social and digital media and its impact on the trilateral relationship between the U.S., China, and Taiwan.

Today, CSIS’s Michael Green and a panel of experts discussed the path forward for the U.S.-Japan alliance in coordinating a North Korea strategy. Watch the full discussion here .

In the latest episode of the CSIS Podcast, experts look at both the fallout from Rex Tillerson’s exit as U.S. Secretary of State, and what China’s abolition of presidential term limits means for Xi Jinping and the future of China.

I received so much email from you about Lynyrd Skynyrd that it blew me away. I loved hearing about your experiences seeing them live in the 70s, your playlists, etc. It’s amazing to me how mainstream LS has become. They even have their own channel on Sirius/XM radio “Free Bird.” I love the Free Bird channel.

There are certain Skynyrd tunes that are utterly burned into my mind. “Workin’ For MCA” is one of them. It’s not just the scorching, quintessential southern rock groove the song features that captures me. It’s also how Ronnie Van Zant’s adroitly crafted lyrics paint such a vivid autobiographical picture of the band’s life. And, I’ll never forget reading Cameron Crowe’s liner notes to the LS live album “One More From the Road” that Ronnie went barefoot on stage so he could feel the stage burn.