The Evening: Iran, Trade War on Hold, Billions and More

The United States today demanded Iran make sweeping changes — from dropping its nuclear program to pulling out of the Syrian civil war — or face severe economic sanctions as the Trump administration hardened its approach to Tehran, as Reuters’ Lesley Wroughton and Parisa Hafezi report.

Dive Deeper: “Demanding All and Getting Nothing: Secretary Pompeo’s Speech on Iran,” by CSIS’s Anthony Cordesman.

“After the Deal: A New Iran Strategy,” Secretary Pompeo’s speech at the Heritage Foundation.

“How to Contain Iran,” CFR’s Michael Dempsey and Philip Gordon on the Iran nuclear deal.

“In exiting the Iran deal, Trump left U.N. sanctions relief intact—why that could pose problems down the road,” by Brookings’ Richard Nephew.

The U.S. suspended its threat to impose tariffs on $150 billion in Chinese imports to the U.S. while negotiations with China continue, but President Donald Trump could impose the tariffs if a deal between the two countries doesn’t progress, Treasury Secretary Steven Mnuchin said, as the Wall Street Journal’s Josh Zumbrun reports.

Venezuela's President Nicolas Maduro is facing an international backlash after winning his second six-year term, in a landslide vote marred by an opposition boycott and claims of vote-rigging. Fourteen countries including Argentina, Brazil and Canada have recalled their ambassadors from Caracas in protest, as the BBC reports.

By dollar value, that’s the percentage of electronic components in the ZTE Axon M phone that originate from U.S. companies like Qualcomm, SanDisk, Skyworks Solutions and Corning.
Source: WSJ.

"We will ensure Iran has no possible path to a nuclear weapon -- ever." 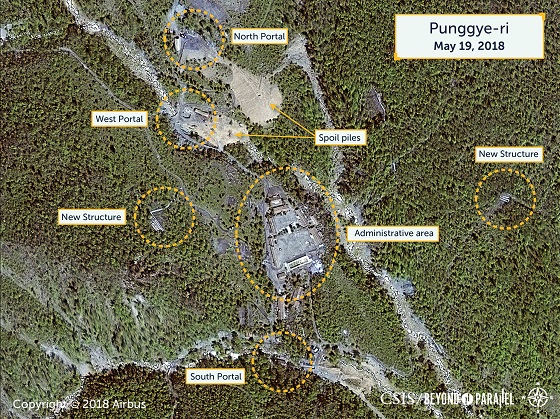 Newly acquired satellite imagery by CSIS's Beyond Parallel from May 19 shows that preparations for the shutdown of the North Korean nuclear test site at Punggye-ri appear to be underway, and that a number of facilities have been shuttered. 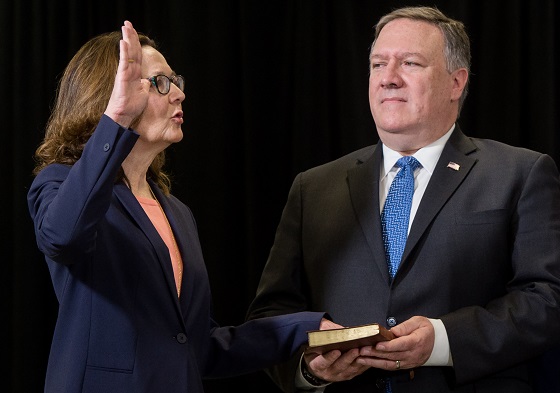 (Photo credit: Saul Loeb/AFP/Getty Images.) Gina Haspel is sworn in as the Director of the Central Intelligence Agency alongside U.S. Secretary of State Mike Pompeo during a ceremony at CIA Headquarters in Langley, Virginia.

Join CSIS at 10:30 a.m. for a conversation on a series of new infrastructure programs in India developed across the country, including economic corridors connecting major cities, the development of inland waterways, and the improvement of road and rail connectivity.

In recent months, researchers within North Korea conducted secret surveys in the country to determine views of the Kim regime. A video from CSIS's Beyond Parallel brings the answers of North Koreans to life, and helps us understand what's happening within the Hermit Kingdom. Watch the full video here.

On the latest episode of Smart Women, Smart Power, former President of Malawi Dr. Joyce Banda discusses educating and protecting young girls, and improving maternal healthcare both in Malawi and in other developing countries.

Spoiler Alert! If you are a fan of the Showtime hit “Billions” and haven’t seen last night’s episode “Icebreaker,” you may want to stop reading this now.

“Billions,” currently in its third season is providing one memorable episode after another this spring. Last night was no different and I felt lucky to watch it. Lucky, like I was to experience the great movies of the 70s and 80s. And lucky now to experience the incredible age of premium television best exemplified by networks like Showtime.

Each “Billions” episode is like a mini-movie, the season taken collectively provides week-to-week single hours of filmic experience over the course of 12 chapters.

To quote Bob Dylan, Axlerod explains of his insatiable need to move forward, “He not busy being born is busy dying.”

And later in the episode as Axe’s plan comes to fruition, the haunting strains of Dylan’s “It’s Alright Ma” close out the show. Very powerful. When music is used as adroitly in premium television these days as it once was by the legendary movie directors of the 70s and 80s, it’s a real smile.