The Kurdish-led Syrian Democratic Forces (SDF) accused Turkey on Thursday of launching a large land offensive targeting three villages in northeast Syria despite a truce, but Russia said a peace plan hammered out this week was going ahead smoothly, as Reuters reports.

Meanwhile, Russian aircraft carried out strikes on the last rebel stronghold in northwestern Syria early Thursday, according to a monitoring group and rescue workers, raising fears of an all-out Syrian regime offensive to retake the area following a Moscow-brokered border deal with Turkey, as the WSJ’s Jared Malsin and Nazih Osseiran report.

Dive Deeper : Check out the latest Truth of the Matter podcast: “A Reckoning in Syria and What it Means for the Middle East.”

British Prime Minister Boris Johnson today challenged lawmakers to approve a general election in December, hoping to win a popular mandate to carry out his vision of a swift Brexit, as the NYT’s Stephen Castle and Mark Landler report.

Vice President Mike Pence accused China of curtailing “rights and liberties” in Hong Kong and criticized U.S. company Nike and the National Basketball Association for falling in line with Beijing in a speech today at the Wilson Center, as Politico’s Madi Bolaños reports.

"In spite of the Turks announcement of the END of military operations, they and their jihadists continue to VIOLATE and launch attacks on the eastern front of the Serêkaniyê. The guarantors of the ceasefire must carry out their responsibilities to rein in the Turks." 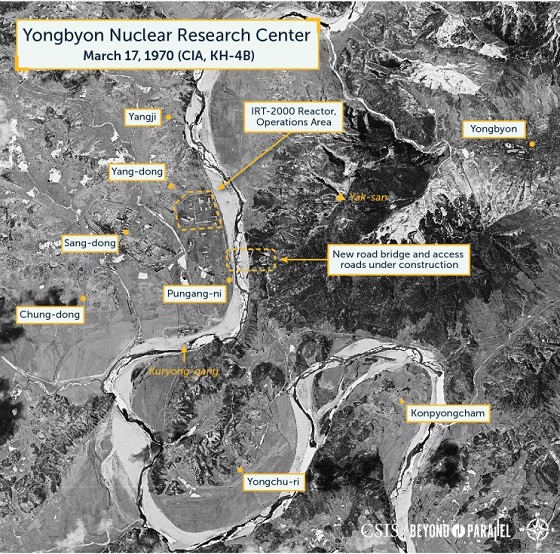 Declassified satellite imagery of the Yongbyon Nuclear Research Center in March 1970 shows continued expansion within the village of Sang-dong, minor improvements in the operations, administration/laboratory and support areas, slowly continuing construction of the bridge across the Kuryong-gang, and minor infrastructure improvements in the Pungang-ni area. These images give us a more precise picture of how and when North Korea started developing the fundamental components of its nuclear weapons program. 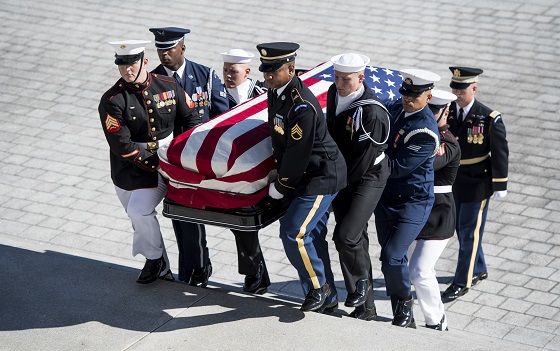 (Photo credit: Photo by Bill Clark-Pool/Getty Images). The flag-draped casket of Representative Elijah Cummings (D-MD) is escorted up the East Front Steps of the U.S. Capitol by a military honor guard prior to lying in state inside Statuary Hall during a memorial service today.

“The Day After Kerouac Died,” by Allen Ginsberg published in the New Yorker.

This Town Next Week

Next Wednesday, October 30, CSIS will host Scott Kirby, president of United Airlines, for a conversation on how the airline industry can navigate future opportunities and challenges.

Amy Lehr, director of the CSIS Human Rights Initiative, testified before the Congressional-Executive Commission on China on "Forced Labor in Xinjiang and Implications for Global Supply Chains." To learn more about her testimony and this critical issues, watch this video in CSIS's Testify series.

The Trade Guys discuss the USMCA on the campaign trail, China's play at the WTO, and more.

“Wheel to the storm and fly.”

Just this week I was telling my friend Danara about how worried I was that my sons would never read Jack Kerouac’s “On The Road.” I’d been thinking about Kerouac a lot this week as Monday marked 50 years to the day he died (see my recommended read above.)

I think about Kerouac all the time though. He represents different things to so many people. Kerouac and “On The Road” instilled in me the American spirit of adventure—especially the urge to go out and experience our country and discover all of the people and things that make it so special.

Kerouac and his friend Neal Cassady set out to explore America and their experience became the inspiration for “On The Road.” Keeping up a hip continuum, Cassady would go on to later share Kerouac’s American spirit with the Grateful Dead.

This is why it’s important to me that my boys read Kerouac’s “On The Road.” It inspires the American spirit no matter what era in which you read it.

A few minutes after I told Danara about my worries, a cool thing happened. I received a text from my oldest son who is away at college for his freshman year, and like Jack Kerouac once was, he’s a young American student-athlete representing his university on the gridiron.

“Dad, you’re gonna be really happy. I’m getting into the Grateful Dead.”