The U.S. military is preparing to pull all American forces out of Syria by the end of April, even though the Trump administration has yet to come up with a plan to protect its Kurdish partners from attack when they leave, as the WSJ’s Dion Nissenbaum and Nancy Youssef report.

Dive Deeper: “How the United States Can Still Keep Faith With Its Best Allies in Syria,” by the Washington Institute’s David Pollock.

Liberal Democrats put flesh on their “Green New Deal” slogan today with a sweeping resolution intended to redefine the national debate on climate change by calling for the United States to eliminate additional emissions of carbon by 2030 as the NYT’s Lisa Friedman and Glenn Thrush report.

Dive Deeper: “How to Grow the Green New Deal,” by CSIS’s Sarah Ladislaw.

The United Nations estimates that corruption cost the world economy at least $2.6 trillion - 5% of the global GDP - in 2018.

“The green dream, or whatever they call it, nobody knows what it is, but they're for it, right?” 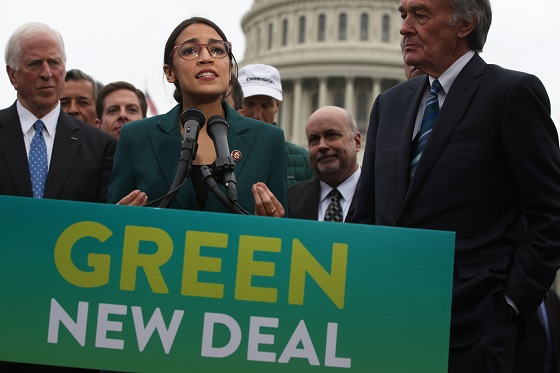 "Europe in 2019: A Critical and Transitional Year," by CSIS's Rachel Ellehuus, Ricklef Beutin, and Quentin Lopinot.

At 10:00 a.m., join CSIS for a panel discussion with the Secretaries of the Army, Navy, and Air Force. The panel will discuss the state of their respective branches in anticipation of the Trump administration’s FY2020 budget.

Also, at 10:00 a.m. CSIS will hold a conversation with ambassador Prudence Bushnell to discuss her new book Terrorism, Betrayal and Resilience: My Story of the 1998 US Embassy Bombings.

And, at 9:30 a.m., the Atlantic Council will hold a panel discussion on China’s mass incarceration of the indigenous Uyghur population in the Xinjiang region.

Today, CSIS hosted H.E. Roya Rahmani, the first female Afghan ambassador to the United States. The conversation focused on the major challenges facing Afghanistan post conflict, and how the U.S. might responsibly leave the region. Watch the full video here.

Trade experts Scott Miller and Bill Reinsch break down the buzz around trade, how it affects policy, and how it impacts your day-to-day. In this new episode, the State of the Union is front and center.

There’s no real reason for me to play this today except that it makes me smile. I hope it makes you smile too. I believe that the Rolling Stones at their peak were the greatest rock and roll band of all time. Here’s some evidence of that.