The chairman of the Joint Chiefs of Staff said an early October patrol made up of U.S. troops and forces from Niger set out with expectations that contact with the enemy was “unlikely” and that a probe into an ambush of the patrol, which left four U.S. special operations troops dead, may take weeks, as Bloomberg’s Anthony Capaccio reports.

Tillerson to Iraq and Afghanistan

Rex Tillerson made his first trip as secretary of state to Iraq and Afghanistan, secretly jetting in and out of countries where U.S. troops and local forces are trying to stop Sunni Muslim militant groups threatening beleaguered governments allied with Washington, as the Wall Street Journal ’s Paul Sonne and Craig Nelson report.

And, as Reuters Jonathan Landay and Maher Chmaytelli report, Secretary Tillerson urged Iraq and the Kurds to resolve conflict through dialogue.

Dive Deeper : See CFR’s Steven A. Cook’s blog post today, “Iraq, the Kurds and Me: What Went Wrong in Kirkuk?”

And, see the Institute for the Study of War’s “The ‘War after ISIS’ Begins in Iraq.”

Prime Minister Shinzo Abe secured a crucial victory in Japan’s parliamentary elections on Sunday, with his ruling bloc maintaining a supermajority that could allow it to push for a revision of the nation’s pacifist constitution, as the Washington Post’s Adam Taylor reports.

The governing coalition of President Mauricio Macri of Argentina won decisive victories in key districts across the country in midterm elections Sunday that were widely seen as a referendum on the center-right leader’s first two years in office, as the New York Times’ Daniel Politi reports.

The S&P 500 has fallen by 1% or more in a single day only four times this year, the fewest for a full year since 1964. Source: Business Insider.

“We need the JCPOA. Scrapping it would be a gift to Iran’s hardliners and a first step towards future wars.” 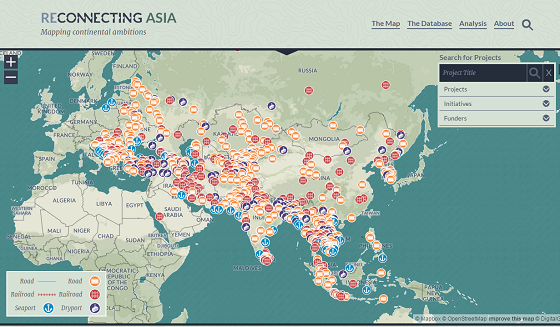 CSIS’s Reconnecting Asia Project is tracking over 2,000 infrastructure projects that aim to reshape economic and geopolitical realities across the “Eurasian supercontinent.” 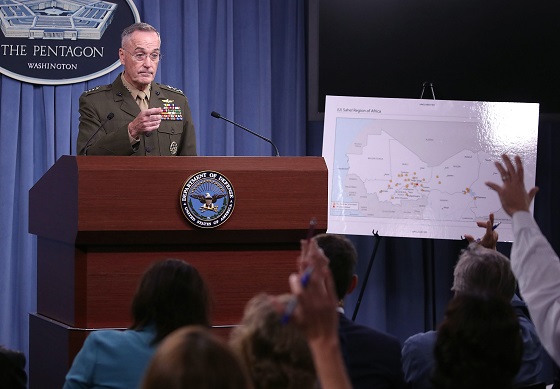 (Photo by Mark Wilson/Getty Images). Gen. Joseph Dunford Jr., chairman of the Joint Chiefs of Staff, briefs the media on the recent military operations in Niger at the Pentagon today.

“China Is Quietly Reshaping the World,” by Anja Manuel for the Atlantic.

Join the CSIS Project on Military and Diplomatic History at 11:00 a.m. for a discussion on the history of foreign election interference.

At 5:00 p.m., join CSIS for the latest Schieffer Series, this time to celebrate the new book Overload: Finding the Truth in Today’s Deluge of News, by Bob Schieffer with H. Andrew Schwartz.

And, at 11:30 a.m., the Woman’s National Democratic Club will discuss U.S.-Iran relations in the Trump era.

CSIS hosted a discussion with the minister for the Armed Forces of France, H.E. Florence Parly, on terrorism, cyber warfare, and the erosion of the international rules-based system.

The latest episode of Take as Directed explores the troubling rise of hepatitis C and HIV infection among young people addicted to opioids and how an Alabama physician hopes to implement harm-reduction strategies on the local level.

Last Friday night on the Tom Petty Sirius radio channel Rolling Stone’s David Fricke was hosting a tribute to the late singer/songwriter whose passing has touched so many people.

Fricke played Tom Petty’s speech to the 2017 Music Cares benefit in which Petty said that while rock and roll may be in a bit of a decline right now, “Believe me, there is nothing like a good rock and roll band.”

Lucinda Williams called in to the show to talk about Petty and his last performance at the Hollywood Bowl where she shared the bill with him. And Fricke even read a birthday card that Johnny Cash had sent to Petty. Cash wrote on the card, “You’re a good man to ride the river with.”

It makes me smile to think that Tom Petty is now in heaven and jamming out with Cash, Jerry Garcia and of course, his late Traveling Wilbury bandmates Roy Orbison and George Harrison. It probably sounds a little something like this.