British PM Theresa May will embark on a tour of European capitals on Tuesday to plead for a better Brexit deal, after the British prime minister was forced at the eleventh hour to abort a crunch House of Commons vote on her plan, as the FT’s George Parker and Laura Hughes report.

“The Limitations of the U.S. Approach to Brexit,” by Carnegie’s Erik Brattberg and Nathaniel Rome.

A bail hearing for Huawei Technologies Co. finance chief Meng Wanzhou got under way today in Vancouver as the executive’s lawyer argued she won’t be a flight risk while awaiting a separate decision on her extradition to the U.S., as the WSJ’s Jay Greene and Dan Strumpf report.

Dive Deeper: “What About Huawei?” by CSIS’s Bill Reinsch.

There are just over 3 months until the United Kingdom is scheduled to quit the EU.

“I say to Donald Trump, and the President of the Republic tells him too: we do not take part in American debates, let us live our life in our country.” 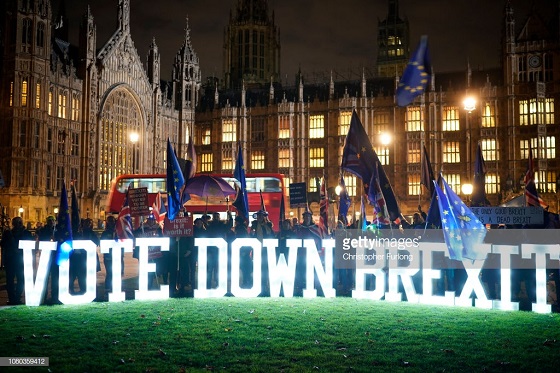 (Photo Credit: Christopher Furlong/Getty Images). Anti-Brexit protesters use illuminated signs as they demonstrate with placards outside the Houses of Parliament, Westminster today in London.

“Your Apps Know Where You Were Last Night, and They’re Not Keeping It Secret,” by the NYT’s Jennifer Valentino-DeVries, Natasha Singer, Michael Keller and Aaron Krolik.

At 3:30 p.m., CSIS will host a panel to explore the role that local governments and U.S. development policymakers can play in ensuring access to food.

Also, at 8:45 a.m., the Inter-American Dialogue will hold a discussion on the USMCA trade agreement and other implications of the new Congress for U.S.-Latin America energy relations.

And at 9:00 a.m. the United States Institute of Peace, the Inter-American Dialogue and the Woodrow Wilson Center will partner for a conversation with three prominent members of the Colombian Senate’s Peace Commission.

Energy 360° examines the energy landscape from the intersection of policy, markets, technologies, and geopolitics. With commentary from leading energy and CSIS experts, we provide context and perspective on the most critical issues shaping energy today. Hosted by the CSIS Energy and National Security Program.

This week I’d like to discuss some of my favorite live albums of all time. I have many favorites and I bet you do too. Please tell me what you dig!

I can’t think about Kurt Cobain and Nirvana without thinking about their stunning performance on MTV’s Unplugged Series. It was recorded in November of 1993 and aired on the network in December of that year. The album, “MTV Unplugged in New York,” was released a year later in November, 1994, eight months after Cobain’s death. It remains one of the rawest musical documents I’ve ever listened to (and watched.) The band’s cover of the Leadbelly song, “Where Did You Sleep Last Night” sends chills down my spine every time. It’s not exactly a smile, but it sure is powerful music captured live.