Wheels on the Bus…

The Trump administration hosted senators for an extraordinary White House briefing today at a perilous moment with North Korea, marked by the unpredictable nation’s nuclear threats and stern talk of military action, if necessary, from the United States. All 100 senators were invited and transported in buses for the unprecedented, classified briefing, as the AP’s Matthew Pennington and Vivian Salama report.

And, the top U.S. commander in the Pacific told Congress today the United States may need to strengthen its missile defenses, particularly in Hawaii, given the advancing threat from North Korea’s missile and nuclear weapons programs. Just before the entire U.S. Senate was due to receive a top-level briefing on North Korea at the White House, Admiral Harry Harris said he believed Pyongyang's threats against the United States needed to be taken seriously, as Reuters’ Phil Stewart and David Brunnstrom report.

China today launched its first aircraft carrier built entirely on its own, in a demonstration of the growing technical sophistication of its defense industries and determination to safeguard its maritime territorial claims and crucial trade routes, as the AP’s Christopher Bodeen reports.

Dive Deeper: See CSIS’s interactive micro-website for “What do we know (so far) about China’s second aircraft carrier?”

President Trump is likely to sign an executive order formally withdrawing the United States from the North American Free Trade Agreement (NAFTA), a move that would set the stage for renegotiating the deal with Canada and Mexico and fulfill one of Trump’s major campaign promises, as the New York Times’ Mark Landler reports.

The number of people that could be displaced in Bangladesh, India, Indonesia, Cambodia, Vietnam, and the Philippines for every meter the sea level rises. Source: Jonathan E. Hillman’s new CSIS commentary, “Asia’s Creeping Catastrophe.”

“Our foreign policy used to be built on principles, the international trading order, international law, the security framework. When you shake those foundations, no one can rely on anything.” 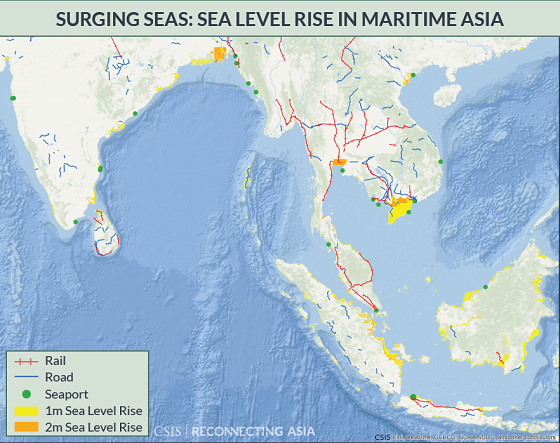 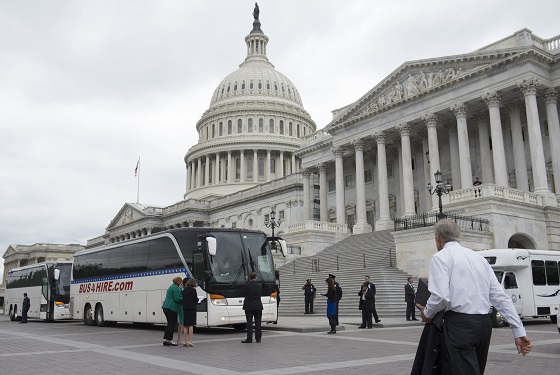 (Photo Credit: SAUL LOEB/AFP/Getty Images.)
US senators board buses at the Capitol today as they prepare to drive up Pennsylvania Avenue to the White House for a briefing on the situation in North Korea.

Via BuzzFeed’s superb correspondent Nancy Youssef: “The Pentagon Will Now Get To Decide How Many Troops To Send To Fight ISIS.”

Join CSIS at 1:45 p.m. for an address by President Mauricio Macri of Argentina.

And join John Hopkins SAIS at 5:00 p.m. for a conversation with Anne Hillerman, author of Song of the Lion, and Ambassador Shirin Tahir-Kheli, senior fellow of the Foreign Policy Institute. This event is part of the SAIS Women Lead for the Women Who Inspire lecture series.

CSIS’s Heather Conley joins this week’s CSIS Podcast to unpack the fallout from the first round of France’s presidential election.

Oscar winning director Jonathan Demme passed away today at 73 after a battle with cancer. Demme, of course directed the 1991 masterpiece “The Silence of the Lambs.” Just a few years later in ’93 his groundbreaking “Philadelphia” netted Tom Hanks and Bruce Springsteen Academy Awards. I could talk about Demme’s other amazing films, among them the 1986 cult classic “Something Wild” or even his superb 2015 film “Ricki and the Flash,” starring Meryl Streep as an aging rocker.

But I’d rather talk about the Demme film that impacted me the most deeply, his 1994 concert film “Stop Making Sense” about the Talking Heads.

I believe “Stop Making Sense” is the single greatest live performance of any band ever captured on film. I’ll even put it above “The Last Waltz” for various reasons we can discuss another time.

Demme’s portrait of the Heads is sublime. It’s unlike anything that came before it or has been captured since. It’s the Mona Lisa of concert films.

This particular clip of “Life During Wartime” changed my life. I had always loved music, but I couldn’t take my eyes off of this film. Its powerful glimpse into the music of David Byrne, Jerry Harrison, Tina Weymouth and Chris Frantz—their intensity, the locked-in groove and the strangeness of Byrne’s compelling performance remains mesmerizing to this day. The whole band is consumed by their sound, including guests stars Bernie Worrell on keyboards and Alex Weir on guitar.

Demme captures the energy and personality of each musician with the precision of a realist painting. The style is all their own and Demme’s camera is just on point to document it. The ultimate concert film, then, now, and probably for all time.