President Trump today said a planned June 12 summit in Singapore with North Korean leader Kim Jong Un “may not work out,” adding if it doesn’t happen then “maybe it would in the future,” as the Wall Street Journal’s Michael Bender and Jonathan Cheng report.

And, as Reuters reports, South Korean President Moon Jae-in, who spent part of the day with President Trump at the White House, was optimistic about the summit in his Oval Office remarks. His national security adviser, Chung Eui-yong, had told reporters en route to Washington he believed there was a “99.9 percent chance” the Trump-Kim summit would take place as scheduled.

Meanwhile, as Reuters also reported today, the USS Milius, one of the U.S. Navy’s most advanced guided missile destroyers, arrived in Japan on Tuesday to reinforce defenses against any ballistic missile attacks by North Korea, or anyone else in East Asia.

Dive Deeper : Newly acquired satellite imagery by the CSIS Beyond Parallel project shows that preparations for the shutdown of the North Korean nuclear test site at Punggye-ri appear to be underway, and that a number of facilities have been shuttered.

On Trade with China

President Trump is moving closer to freeing the embattled Chinese company ZTE Corp. from severe penalties over export law violations, telling reporters that existing restrictions had harmed American firms that sell material to China. But, as the Washington Post’s Damian Paletta and David Lynch report, lawmakers from both parties are accusing the President of being outmaneuvered by Beijing.

Dive Deeper : The latest episode of the new CSIS podcast, “The Trade Guys” was posted today: “Trade War on Hold and a Skinny NAFTA.”

“No Winners in a US–China Trade War” by the Peterson Institute’s Gary Hufbauer and Euijin Jung.

French President Emmanuel Macron’s trip to Russia this week is part of a wider European effort to tie President Vladimir Putin to the Iran nuclear accord and help salvage the deal, as Bloomberg’s Gregory Viscusi and Henry Meyer report.

And, as Reuters reports, Iran poured scorn on threatened U.S. sanctions on Tuesday and told European powers to step up and salvage its international nuclear deal.

Dive Deeper : “The Trump administration’s Plan B on Iran is no plan at all,” by Brooking’s Susan Maloney.

“Europe Should Defend the Iran Deal Without Burning Bridges to the US,” by Chatham House’s Robin Niblett.

“Demanding All and Getting Nothing: Secretary Pompeo’s Speech on Iran,” by CSIS’s Anthony Cordesman.

China will reduce its import tariff on autos from 25% to 15% starting July 1 in a concession to U.S. trade complaints.
Source: WSJ

Our new CSIS podcast, “The Trade Guys,” breaks down the buzz around trade, how it affects policy, and how it impacts your day-to-day life.

Check out the third episode, “Trade War on Hold and a Skinny NAFTA” that tackles two big stories: what came out of the latest U.S.-China trade talks, and what’s happening with the North American Free Trade Agreement. 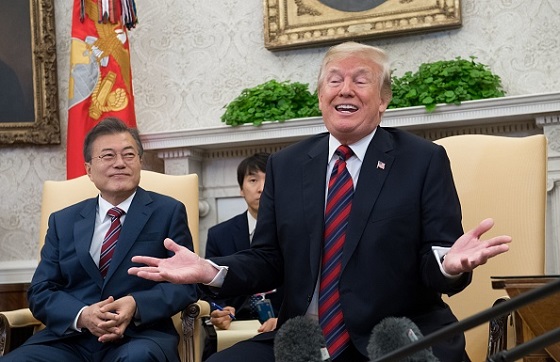 “How China acquires ‘the crown jewels’ of U.S. technology,” by Politico’s Cory Bennett and Bryan Bender.

Join CSIS at 9:00 a.m. for a discussion on governance and democracy in sub-Saharan Africa.

At 10:00 a.m., join CSIS for "Are Americans Too Old to be Entrepreneurs?" a conversation on key policies that affect innovation in an economy.

And, join Carnegie Endowment for International Peace at 12:00 p.m. for a discussion on policy recommendations regarding refugee demands and a political resolution to the Syrian conflict.

Today, CSIS’s Wadhwani Chair in U.S.-India Policy Studies hosted an event on the state of play of infrastructure development across India. Watch the full discussion here.

On the latest episode of Russian Roulette, Anton Lavrov, a visiting fellow with the Russia and Eurasia Program at CSIS, discusses Russian military reforms, what new capabilities Russia demonstrated in Syria, and where the Russian military may (or may not) be heading.

This is for all of the expert Dead Heads who have been writing me and conveying their considerable wisdom.