U.S. President Donald Trump sought today to reassure North Korea’s leader Kim Jong Un after Pyongyang threatened to scrap an unprecedented summit, saying Kim’s security would be guaranteed in any deal and his country would not suffer the fate of Muammar Gaddafi’s Libya, as Reuters’ Steve Holland reports.

And, as the Wall Street Journal’s Jonathan Cheng and Andrew Jeong report, North Korea’s latest tirade heralds a shift toward a more strident tone from Pyongyang that will test Washington and Seoul’s willingness to engage with the North.

Dive Deeper : “Will the Trump-Kim Summit Be Cancelled?” by CSIS’s Lisa Collins.

Chinese negotiators are preparing to offer the United States a mammoth package of promises to buy more American goods, in a bid to pare down the trade deficit between the two countries and to defuse President Trump’s aggressive moves against China’s trade practices, as the New York Times’ Mark Landler and Ana Swanson report.

“Is Trump in a Trade War with China? An Up-to-Date Guide,” by the Peterson Institute’s Chad Brown and Melina Kolb.

New U.S. sanctions that will hit Iran’s energy industry and the fallout of Venezuela’s economic collapse have raised fears of significantly tighter global oil supplies, sending prices above $80 a barrel for the first time in nearly four years, as the FT’s Anjil Raval reports.

“Only the US Can Prevent More Clashes Between Israel and Iran in Syria,” by Chatham House’s Lina Khatib.

The U.S. estimate for the number of Islamic State fighters currently operating in Afghanistan, believed to be half the level it was 18 months ago. Source: WSJ

"On this opportunity, the present south Korean authorities have been clearly proven to be an ignorant and incompetent group devoid of the elementary sense of the present situation."

I’m hosting a new CSIS podcast called “The Trade Guys,” featuring our “Trade Guys” Bill Reinsch and Scott Miller. We’re talking trade policy in ways that everyone can enjoy and understand. This week I asked the Trade Guys for their take on the ZTE situation.

Available on Apple Podcasts or SoundCloud. 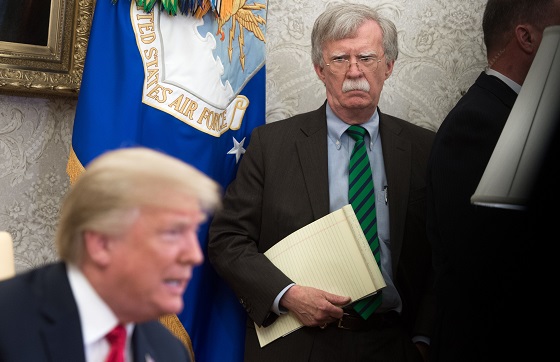 Join CSIS at 8:30 a.m. for an all-day event, the Future Strategy Forum, a new initiative connecting women scholars who research national security with its leading practitioners.

At 1:00 p.m., join CSIS for a discussion about the business case for U.S. government involvement in combating corruption and supporting the rule of law.

And, join the United States Institute for Peace at 10:00 a.m. for a conversation on overcoming challenges to inclusive peace processes and negotiated settlements.

Today, CSIS’s Global Health Policy Center hosted a symposium on the current state of pandemic preparedness policy and practice. This event examined how U.S. and international policies aim to reduce the risk of a 21st century equivalent of the Influenza of 1918 and how these policies translate into practice in high-risk countries. Watch the full discussion here.

On this weeks episode of 35 West, Brian Winter, editor-in-chief of Americas Quarterly, gives an update on a growing anti-corruption movement in Latin America and how inflation affects every day life in Argentina.

I’ve been listening a lot lately to one of my favorite all time singers, Emmylou Harris. And I came across this classic cover of Chuck Berry’s “C’est La Vie (You Never Can Tell).” I love the country-blues fusion of this performance.