The U.S. accused Russia today of trying to weaken international action against North Korea by blocking a report that concludes Russia and China have helped Pyongyang try to evade sanctions, as the Wall Street Journal’s Farnaz Fassihi reports.

And, as the New York Times’ Choe Sang-Hun reports, when President Moon Jae-in of South Korea sits down Tuesday with Kim Jong-un, North Korea’s leader, for their third summit meeting, they will share a common goal: fashioning a political statement this year declaring the end of the Korean War.

Dive Deeper: “A Tricky Inter-Korean Summit: What to Know,” by CFR’s Scott Snyder.

Russian and Turkish troops are to enforce a new demilitarized zone in Syria’s Idlib region from which “radical” rebels will be required to withdraw by the middle of next month, Russia’s Vladimir Putin said today after a meeting with Turkish President Erdogan, as the Washington Post’s Erin Cunningham reports.

The U.S. Air Force is predicting it will need to grow sharply over the next decade or so, boosting the number of operational squadrons by nearly a quarter to stay ahead of increasingly muscular militaries in China and Russia, as Reuters’ Phil Stewart reports.

Trade hawks have warned the White House against watering down plans to hit Beijing with 25 per cent tariffs on $200bn in imports, as the Trump administration prepared to unveil its most serious escalation yet in its trade war with China, the FT’s Lucy Hornby, Demetri Sevastopulo and James Politi report.

If U.S. tariffs against China go into effect, China’s annual GDP growth could fall to 5.6% in 2019, research firm Oxford Economics predicts. That would be its lowest level in almost three decades, and down from a projected expansion of 6.5% this year.
Source: WSJ

“I’d like to have frank dialogue with Chairman Kim on how to find a point of contact between U.S. demands for denuclearization and North Korea’s demands for ending hostile relations and security guarantees.”

The Trade Guys continue their recording tour; this time at the University of Maryland's Robert H. Smith School of Business. In a new episode, they are joined by Rick Powers, the Port of Baltimore's director of marketing. The guys and Rick discuss updates on NAFTA, the tit-for-tat with China, and roll-on/roll-off (a.k.a. RoRo) shipping's relationship with tariffs. 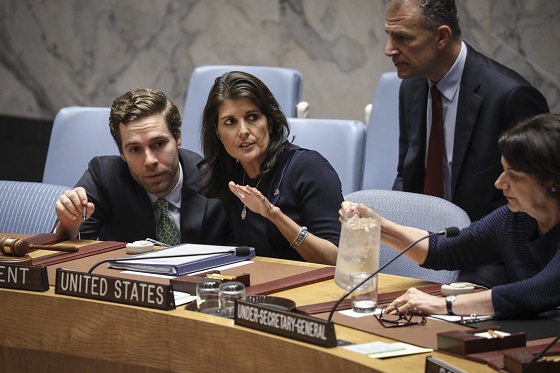 (Photo credit: Drew Angerer/Getty Images.) U.S. Ambassador to the U.N. Nikki Haley today at the UN. The United States called a meeting of the Security Council to discuss what they call efforts by some members of the of the council to undermine and obstruct U.N. sanctions against North Korea.

“Inside Israel’s Secret Program to Back Syrian Rebels,” by Foreign Policy’s Elizabeth Tsurkov.

At 10:00 a.m., join the CSIS Americas Program for a discussion on the current state of Venezuela’s refugee crisis and the two million Venezuelans that have fled the country in the past two years.

And at 1:00 p.m., the Atlantic Council Global Energy Center will host a conversation on the role of technology in energy innovation with three energy journalists: Axios' Amy Harder and Steve LeVine and Quartz's Akshat Rathi,

The Ebola outbreak in the Democratic of the Congo is the first ever case in an active warzone.

This week's episode of Take as Directed navigates the complex dynamics of the highly dangerous outbreak.

There are certain songs by certain bands that just get your blood pumping. This is one of them…more about the band tomorrow.