The Evolution of Domestic Terrorism

Chairwoman Jackson Lee, Ranking Member Biggs, and distinguished Members of the Subcommittee on Crime, Terrorism, and Homeland Security, thank you for the opportunity to testify before the Subcommittee on “The Rise in Violence Against Minority Institutions.” The threat from domestic terrorism in the United States is serious and continues to evolve, including the threat to minority populations. As this testimony highlights, objective analysis and better data are particularly important to gauge the nature of the threat and effective responses.

The rest of this testimony is divided into three sections. The first outlines the contours of domestic terrorism and highlights the data set compiled by analysts at the Center for Strategic and International Studies (CSIS). The second section focuses on trends in domestic terrorist incidents and fatalities. The third provides implications for Congress.1

Terrorism includes the deliberate use—or threat—of violence by non-state actors to achieve political goals and create a broad psychological impact.2 Violence and the threat of violence are important components of terrorism. This definition is largely consistent with the official U.S. government definition of domestic terrorism under 18 U.S. Code § 2331 as “acts dangerous to human life” that occur primarily within U.S. territory and are intended “(i) to intimidate or coerce a civilian population; (ii) to influence the policy of a government by intimidation or coercion; or (iii) to affect the conduct of a government by mass destruction, assassination, or kidnapping.”3

This testimony leverages a CSIS data set, which includes 1,040 cases of terrorist plots and attacks in the United States between January 1, 1994, and December 31, 2021. The data set is divided into such categories as the incident date, perpetrator, location, motivation, number of individuals wounded or killed, target, and weapons used. We have cooperated with—and provided the data to—such organizations as the FBI, Department of Homeland Security, Department of Defense, and National Counterterrorism Center.

II. Trends in Incidents and Fatalities

The years 2020 and 2021 had the highest numbers of domestic terrorist attacks and plots in our data set. In 2021, there were 73 terrorist attacks and plots in the United States. As shown in Figure 1, the number of fatalities increased from 5 in 2020 to 30 in 2021. This level was roughly comparable to 2019, in which there were 35 fatalities from terrorism in the United States. 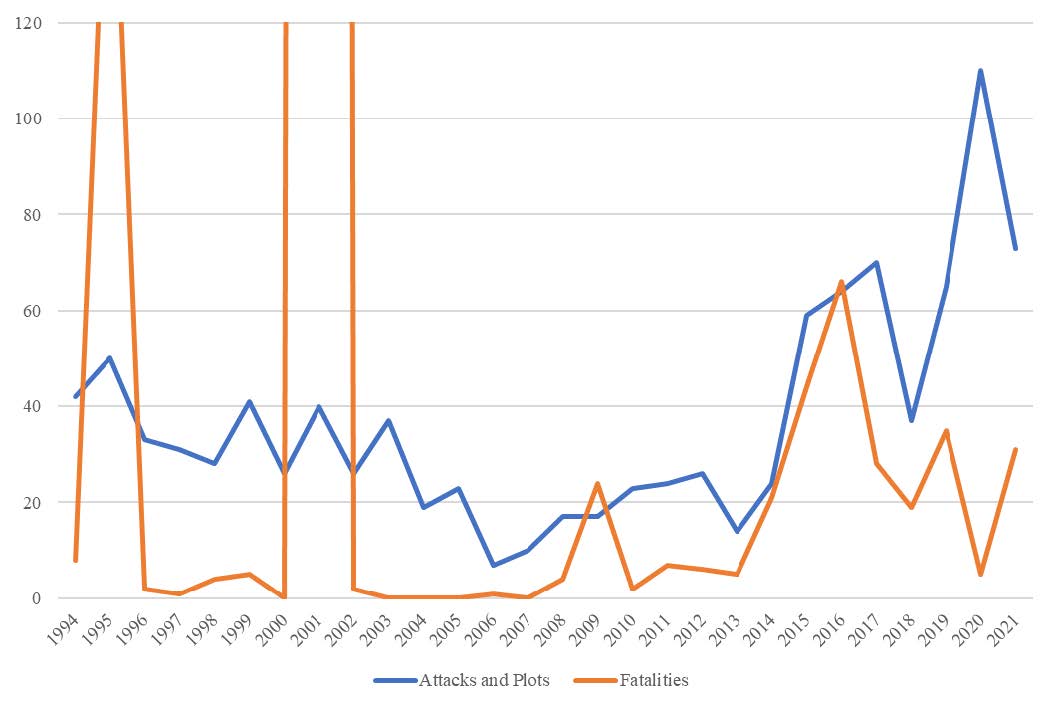 The recent increase in domestic terrorist activity began around 2014. From 2014 to 2021, there have been an average of 31 fatalities per year—indicating that the 30 deaths in 2021 were typical of this period. This is substantially more than the period from 1994 to 2013, during which there were only three years in which more than eight individuals were killed in terrorist attacks in the United States.4

The return to a higher level of fatalities in 2021 may indicate that the lower number of deaths in 2020 was an anomaly. This may have been the result of the Covid-19 pandemic and related lockdown policies disrupting routines and reducing mass gatherings, the absence of mass casualty events—including due to effective prevention efforts—or perpetrators’ prioritization of less lethal methods to send a political message, particularly in the context of public demonstrations and the 2020 presidential election.

The types of weapons used and the targets selected in terrorist attacks in 2021 may provide insight into perpetrators’ intentions and the threat of lethal terrorist activity. White supremacists and other like-minded attackers used more lethal weapons, such as firearms. Anarchists, anti-fascists, and other like-minded attackers primarily used less lethal methods, including melee attacks. Regardless of perpetrator ideology, most terrorist fatalities in 2021 were from firearms: 9 of the 11 fatal attacks were committed with firearms, accounting for 26 of the 30 deaths.5

Of the 38 white supremacist and other like-minded terrorist attacks and plots in 2021, 16 used firearms, 9 involved explosives and incendiaries, 4 were melee attacks using weapons such as knives or bludgeoning weapons, and 2 were vehicular attacks. For example, on March 16, Robert Aaron Long conducted a shooting spree at three spas in the Atlanta metropolitan area, killing eight individuals and injuring one. Long viewed the women working at these spas as a “temptation” and aimed to help other men suffering from “sex addiction” by killing them.6

Of the 31 anarchist, antifascist, and like-minded terrorist attacks and plots in 2021, 19 were melee attacks using weapons such as knives or bludgeoning objects, 3 primarily used explosives or incendiaries, 2 used firearms, and 1 was a vehicular attack. The large number of melee attacks was a diversion from the traditional reliance on explosives and incendiaries by anarchist, antifascist, and like-minded individuals.7 Most of these melee attacks involved deliberate property damage, and some also included incendiaries as a secondary weapon.

Government, military, and police locations and personnel were the most frequently targeted by domestic terrorist attacks regardless of perpetrator orientation. Of the total 77 terrorist attacks and plots in 2021, 29 were directed against government, military, and police targets. These perpetrators identified with a range of ideologies and movements, including the QAnon conspiracy, the sovereign citizen movement, militia groups, anarchism, anti-fascism, environmentalism, and other anti-government and anti-authority philosophies. The next most common target for violent anarchist, antifascist, and like-minded perpetrators was businesses.

In addition, white supremacists and other like-minded extremists have targeted individuals because of their racial, ethnic, religious, or political makeup—such as African Americans, immigrants, Muslims, and Jews. In 2022, for example, Malik Faisal Akram targeted a suburban Fort Worth, Texas synagogue. In 2018, Robert Bowers murdered 11 people at the Tree of Life synagogue in Pittsburgh, Pennsylvania, and Patrick Crusius murdered 22 people at a Walmart in El Paso, Texas in 2019.

Congress has an important role to play in several respects.

First, the U.S. government does not publicly release comprehensive data on terrorist attacks and plots, the characteristics of perpetrators, and other factors like tactics and targets. Data analysis could offer an objective mechanism for apportioning counterterrorism resources and efforts relative to actual threats. The FBI (or more broadly the Department of Justice) and Department of Homeland Security should issue annual or biannual reports to the House and Senate Judiciary, Homeland Security, and Intelligence Committees that assess the domestic terrorism threat; analyze domestic terrorism incidents that occurred in the previous six months or one year; and provide transparency through a public quantitative analysis of domestic terrorism-related assessments, investigations, incidents, arrests, indictments, prosecutions, convictions, and weapons recoveries.

Second, state, local, and tribal law enforcement agencies need additional help—including resources—to identify and respond to domestic terrorism “left of boom.” The Department of Homeland Security, Department of Justice, and FBI should continue to review their respective counterterrorism training and resource programs that are provided to federal, state, local, and tribal law enforcement agencies and ensure that such programs include sufficient training and resources in understanding, detecting, deterring, and investigating acts of domestic terrorism. Congress should also consider encouraging the Department of Homeland Security to increase funds for the Nonprofit Security Grant Program, which provides funding for nonprofit organizations—including houses of worship—to improve and upgrade their security.

Third, the U.S. government, its partners overseas, and the private sector need to continue to aggressively target individuals and groups that espouse violence on digital platforms. This is a war of ideas on virtual battlefields—just as much as on the streets of U.S. cities and towns. Virtually all domestic extremists use the internet and social media platforms to release propaganda, coordinate training, raise funds, recruit members, and communicate with others. Congress should continue to demand that these digital platforms take down content that supports domestic terrorism and violates their terms of service.

Terrorism, like crime, will not end. But better data collection and analysis—along with effective countermeasures—can significantly reduce the threat from domestic extremists.