Eyes Everywhere: Intelligence and Strategic Decisionmaking in the Gray Zone

The United States has come to recognize gray zone confrontation as among its most vexing strategic challenges. From Crimea to Syria to the South China Sea, the United States’ competitors have been pushing, probing, and testing U.S. resolve to enforce the international rules-based order it champions. And, in all these places, the world has watched long-established global norms—and U.S. interests—slowly erode due to steady and determined pressure from Beijing and Moscow. Better understanding how to think about and confront gray zone activity, both in policy and technology, is of the utmost importance to the United States and its allies.

Recently, CSIS held a tabletop exercise (TTX) that ran participants through several scenarios featuring adversaries employing aggressive gray zone and near-conflict tactics to achieve some goal or undermine U.S. operations. Our participants included a diverse group of national security professionals in intelligence, diplomacy, and military affairs. The players’ actions and insights during the exercise highlighted two critical facets of dealing with gray zone activity. First, intelligence on the situation must be penetrating and robust, including definitive insights into an adversary’s capabilities, intentions, and motivations. And second, time is of the essence.

Analysts broadly define the gray zone as the “contested arena between routine statecraft and open warfare.” Gray zone tactics vary widely but are common in that they are below the threshold of kinetic military action and are calibrated to limit the risk of escalation. Some gray zone efforts appear targeted at a specific objective, as seen in Russia’s annexation of Crimea. In some instances, it looks more like general harassment of U.S. forces and interests. Examples here include China’s purported use of lasers to blind U.S. pilots in Africa or the so-called “Havana Syndrome” in which a foreign power reportedly sickened U.S. diplomats, likely with some form of directed energy.

Another pattern in gray zone competition is a “slow boil” effect, in which an adversary takes small steps toward an objective, gradually altering the status quo. A good example is China’s gradual militarization of the South China Sea through initial legal claims, the use of civilian vessels to harass and intimidate rivals, the construction of artificial islands using state-owned companies, and finally, the gradual militarization of the islands. And since “possession is nine-tenths of the law,” it can be challenging to roll back these kinds of strategic gains once they are seized.

The players in the gray zone exercise faced two scenarios. In the first, they dealt with a crisis in Djibouti where U.S. aircraft have been coming under electromagnetic attack of unclear origin. In the scenario, set a few years in the future, both China and Russia have a military presence in the region. In the second scenario, Russia begins encroaching on the Svalbard archipelago in the Arctic—initially by increasing its civilian population there, then quietly deploying paramilitary and military equipment under the guise of expanded mining operations. Finally, Russia assumes a more robust military presence to “protect Russian citizens” after a skirmish between the Russian and Norwegian air forces near the archipelago.

In each scenario, teams received varying degrees of intelligence on the situation, and no group had complete information. These foggy intelligence pictures produced the players’ greatest source of anxiety. Overall, our decisionmakers showed an aversion to taking decisive action without highly definitive information on the adversary’s capabilities, intentions, and objectives. Rather than infer conclusions from available intelligence, the players generally opted to take more time to gather additional information. Most players described the intelligence deficit as their single most significant source of risk in their efforts to confront the situation.

A second source was the fear that their actions could lead to inadvertent escalation. This included discomfort with employing riskier intelligence-gathering methods, such as close-in aerial reconnaissance with crewed aircraft. Few participants wished to risk creating a conflict where there might not have been one otherwise.

Another insight was the importance of time. In the Svalbard scenario, many players felt the Russians were already too entrenched to remove at an acceptable cost. Indeed, while the gray zone “attacker” benefits from the slow game, the “defender” must act swiftly.

There is an evident tension between these two points, however. Most decisionmakers demand a high-fidelity intelligence to order decisive action. Yet, by the time they understand what is happening and why, it may be too late to roll it back without significant escalation—for which there may be little appetite. Such caution may be particularly acute when relative national interests are imbalanced. Even with the North Atlantic Treaty Organization alliance issues at play, for example, none of the players were eager to risk war with a nuclear power over the fate of a little-known chain of Arctic islands.

The most apparent remedy for these challenges is to lean more heavily on the intelligence community to detect gray zone plots in their earliest possible inception, long before an adversary gains a fait accompli (e.g., Crimea). As one player said, the United States must “take action early to turn the gray zone black and white.” These insights echo the findings of a comprehensive CSIS study on gray zone competition in 2019, which noted that “The United States must do a better job recognizing competitive campaigns from the weak signals of many gray zone tactics.”

To accomplish this, intelligence, surveillance, and reconnaissance (ISR) capabilities need to be quite persistent, with prompt analysis that enables decisionmakers to respond with confidence and efficacy. Greater ISR persistence will likely require increasing the supply of ISR platforms. As CSIS’s Jake Harrington and Riley McCabe point out in their recent commentary on modernizing intelligence, “collection assets capable of conducting long-term, persistent threat monitoring are often overcommitted.”

Harrington and McCabe highlight ways of reducing pressure on military ISR assets through greater use of commercially available intel-gathering capabilities, such as open-source satellite and aerial imagery, social media, and public records. There is even a growing availability of commercial synthetic aperture radar data which carries the advantage of being unaffected by cloud cover, which is critical when monitoring regions such as the Arctic. Several of our TTX players also highlighted the utility of harnessing open-source data, arguing the United States must think “beyond traditional in-theater capabilities . . . to take into account civilian and commercial capabilities.”

Yet, open-source data can never fully replace the need for dedicated military or intelligence community ISR platforms. Uncrewed aircraft have particular advantages in gray zone competition. They tend to have greater persistence than most other kinds of aerial assets and have lower operating costs. The use of uncrewed systems also carries less risk, as they can operate in contested areas without danger to U.S. personnel. There nevertheless remains an imbalance between supply and demand for these assets—a problem that appears likely to persist. CSIS’s Seth Jones recently warned of this issue, writing that “the services appear likely to buy few additional uncrewed aircraft, a serious miscalculation based on the increasingly global nature of security competition.”

In addition to expanding intelligence sources, providing prompt and actionable information to decisionmakers also requires embracing innovative means to process vast amounts of incoming data. CSIS’s 2019 gray zone study noted that “artificial intelligence and machine learning systems can help analysts in quickly identifying new patterns in data and inferring intent through synthesis with the traditional intelligence disciplines.” Such tools will likely become increasingly important to detecting malign activity as U.S. adversaries become more adept at concealing their operations. As a recent commentary on analyzing gray zone intelligence highlighted: “Stealth and denial and deception efforts are features of gray zone competition, so indications and warning of adversary activity are more likely to appear as subtle oddities rather than clear data points.”

Intel scholars have also pointed to the promise of expeditionary edge computing, which “offers significant potential to expedite data exploitation at the point of collection” rather than through the more time-consuming traditional cycles of processing, exploitation, and dissemination. While these technologies will never replace the need for human intelligence analysis and judgment, they can provide analysts with needed support and significantly accelerate the intelligence cycle.

U.S. strategic culture tends to make a sharp distinction between war and peace, and this is one reason the gray zone is an uncomfortable arena for Americans. Nevertheless, the United States cannot ignore the effectiveness of the gray zone strategies employed by its near-peer competitors. The United States has the means to hold its own in this space. It can prevail through the development of sound strategy, training and exercises, technological innovation, and smart acquisition.

Ian Williams is a fellow in the International Security Program and deputy director of the Missile Defense Project at the Center for Strategic and International Studies in Washington, D.C., specializing in missile defense and strategic forces, missile proliferation, and deterrence.

This article is based on insights gained at the CSIS tabletop exercise “Eyes Above: Intelligence and Strategic Decisionmaking in the Gray Zone,” an event made possible by support from General Atomics.

Hypersonic warfare: how China is edging ahead in the race for the fastest missile
The Times | Michael Evans
October 22, 2021
In the News 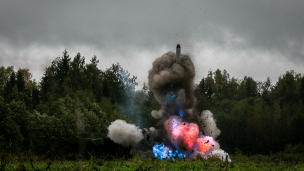 What weapons do Palestinian militants in the Gaza Strip have and how powerful are they?
Washington Post | Claire Parker, Adam Taylor
May 13, 2021
View all content by this expert