Quarterly gross domestic product figures released by the Turkish Statistical Institute (TUIK) on June 11 showed that the Turkish economy had grown by 7.4 percent year-on-year in the first quarter of 2018. President Recep Tayyip Erdogan tweeted “Despite all the attacks on the economy and games played, we continue to grow strongly,” while Deputy Prime Minister Mehmet Simsek, who has responsibility for the economy, hailed “Turkey’s success in ranking among countries with the strongest growth performance in the OECD, the EU and G-20 members.” The sustained high growth was based on strong domestic demand, with private consumption increasing by 11 percent and public spending by 3.4 percent.

The government’s eagerness in welcoming the growth figures was understandable as the current campaign leading up to the June 24 presidential and parliamentary elections, which kicked off on April 18, has witnessed unwelcome developments relating to the Turkish economy. This included a rapid fall in the value of the Turkish lira (TRY), which has now lost 22 percent of its value against the U.S. dollar (USD) since the beginning of 2018 and more than 30 percent during the past year. There was also a continued worsening of the inflation rate, which TUIK announced on June 6 had reached 12.2 percent year-on-year in May, well above the official target of 5 percent. 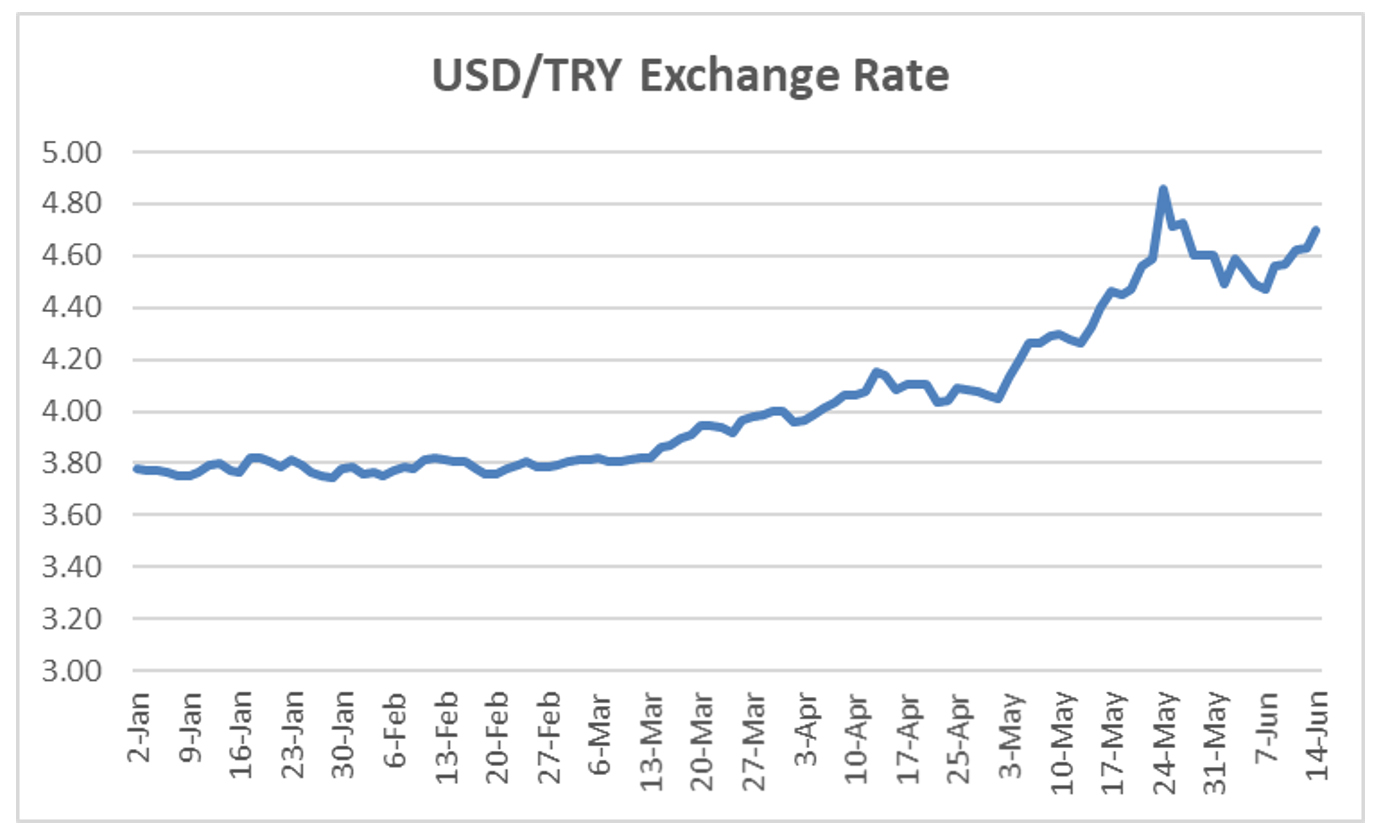 On April 25, the Central Bank of Turkey (CBRT) responded to the financial volatility by raising its de-facto policy rate, the late liquidity window (LLW), by 75 basis points to 13.50 percent. This was followed by an unscheduled meeting among Erdogan, his economy ministers, and aides after which it was announced that “necessary measures will be taken to reduce the interest rate and exchange rate pressure and thereby inflation” and “growth-focused economic policy will continue.” Another rate hike on May 23, when the TRY fell to a record low of 4.92 against the USD, raised the LLW rate by 300 basis points from 13.5 to 16.5 percent. The move, according to Reuters, was the product of intense lobbying of Erdogan, who has been consistently and vociferously hostile to high interest rates, by Simsek, Finance Minister Naci Agbal, and Prime Minister Binali Yildirim who argued that failure to act would lead to “permanent damage.”

The CBRT then proceeded belatedly to simplify its monetary policy process on May 28 by making the one-week repo figure the policy rate and making it equal to the funding rate, while adjusting the overnight and the LLW rates to 150 basis points below and above the policy rate respectively. On June 7, it raised the policy rate yet again from 16.5 percent to 17.75 percent, above market expectations of only 50 to 100 basis points. Although it was clear that the decision was driven primarily by the political imperative to try to stabilize the TRY ahead of June 24, the CBRT justified it on the grounds that it needed to confront “elevated levels of inflation and inflation expectations.”

The CBRT’s substantial rate hikes during the campaign totaling 500 basis points have been predictably welcomed by foreign investors and helped restore to some extent its credibility and independence after Erdogan’s unfortunate statement in London on May 14 that he would become the “indisputable head of the executive with respect to the steps to be taken and decisions on these issues” after the elections. It is noteworthy in this context that Simsek and CBRT chief Murat Cetinkaya felt it necessary to organize a special trip to London on May 28 to assure investors that there was “an understanding within the administration of what has to be done” and that the CBRT had the freedom to take additional measures if needed.

Having come into office in November 2002 in the aftermath of a major financial crisis with a strong economic program and a commitment to free market principles, Erdogan and his Justice and Development Party (AKP) then consolidated their grip on power by delivering on their promise of bringing greater prosperity to Turkish voters through access to easily available foreign funds. The favorable global financial environment also allowed the AKP to stick to its model of growth based mainly on cheap credit and public spending. Although the inevitable downside of this strategy was a steep rise in consumer debt and widening of the current account deficit, there was no course adjustment even as the era of easy money was coming to an end.

A fundamental problem Turkey faces is the lack of domestic financial resources to sustain its high growth ambitions while financing its current account deficit. This makes its economy dependent on the constant inflow of foreign funds. During recent years, the bulk of incoming capital has been in the form of short-term funds attracted by higher interest instead of the healthier long-term foreign direct investment. By moving to a high real interest rate of 5.1 percent, the government is trying to ensure the continuation of incoming portfolio investments, which have fallen alarmingly from $7.6 billion to $1.8 billion year-on-year in the first four months of 2018.

However, the higher interest rates mean an additional burden for indebted households and companies with some estimates suggesting that each percentage point increase in CBRT interest rates may add close to TRY 15 billion to existing debts. The continuing problems of the TRY—it has not fallen below the previously unthinkably high rate of 4.45 to the dollar despite the hikes in interest rates and has again risen above 4.70—are also putting greater pressure on the private sector, which owes $336 billion in foreign currency debts. It is significant that several prominent corporations experiencing difficulties in servicing their debt have recently approached Turkish banks to restructure a total of $18 billion in loans. There is strong speculation that the unfavorable financial winds, which are negatively affecting consumers and companies, will lead to a slowing down of the economy in the second half of the year.

Erdogan, who characterized interest rates as “the mother and father of all evil” on May 11, has been forced by markets to make an uncharacteristic retreat during his campaign for reelection. However, he has done so without public acknowledgment or abandonment of his eternally positive discourse on economic strategy. Erdogan has instead put the blame for the economic problems on malevolent outside actors working with internal coconspirators. On June 5, for example, he advised voters “not to pay attention to games being played over the exchange rates…we will settle scores after June 24.” The following day he boasted that there was not “the slightest problem with revenues, expenditures, borrowing or paying debts. On the contrary, Turkey is in a better shape in terms of macroeconomic indicators when compared to many developed countries, let alone developing countries. All our indicators are excellent, including our budget deficit, our foreign exchange reserves to debt ratio, the capital adequacy ratio of the banking sector and our growth rates.” He added “our economy, which is targeted by way of exchange rates, interest rates and inflation, will thrive after June 24.” With opinion polls indicating growing economic concerns on the part of voters, it remains to be seen whether the Turkish electorate will continue to believe Erdogan’s promises that all will be well with the economy after June 24.