The Forces that Shape the Military Options in Korea

It is all too easy to talk about military options in general terms. The devil, however, lies in the details—both in terms of the practical ability of a given side's capability to execute given options and in terms of the ability to predict how the other side(s) will react and how the resulting conflict will escalate or be terminated.

This is particularly true in the case of North Korea. Its leader maintains power and control by constantly exaggerating the threats his country faces, provoking outside states like the United States and South Korea, and leveraging China's need for his country to be a strategic buffer on its northern border, against China's desire for stability and economic development. He gains from carefully exploiting what other states tend to see as extremism, overreaction, and "irrational action."

This offers him a way of dealing with the reality that North Korea is economically weak and is a large but often obsolescent military power. While estimates differ, the CIA World Factbook offers some of the highest public estimates of North Korean GDP. Recent CIA estimates indicate that North Korea's population is around 25.2 million versus 50.9 million for South Korea, making it roughly half the size of its southern neighbor. The CIA notes that any estimate of North Korea's GDP presents major problems, but reports that North Korea's GDP is somewhere around $40 billion in purchasing power parity terms versus over $1.9 trillion for South Korea, or a little over 2% of the size of its neighbor's economy.

The CIA also estimates that North Korea's GDP per capita is only around $1,800 versus $39,100 for South Korea, making South Korea's per capita income some 22 times larger. As periods of famine have made all too clear, this is a truly miserable economic performance for a state that began its existence as the more developed of the two countries. It also helps explain why life expectancy in South Korea is more than 10 years higher than it is in North Korea.

If one looks the military efforts of each side, North Korea is so secretive that there are no credible estimates of North Korean military spending, or the percent of its GDP that it spends on military forces. South Korea spent some $34 billion in 2016, or 2.4% of its GDP. What is clear from estimates of North Korea's military forces by bodies like the International Institute for Strategic Studies (IISS), however, is that North Korea is still one of the most militarized countries in the world, and probably leads the world in terms of military expenditures as a percent of GDP and per capita. 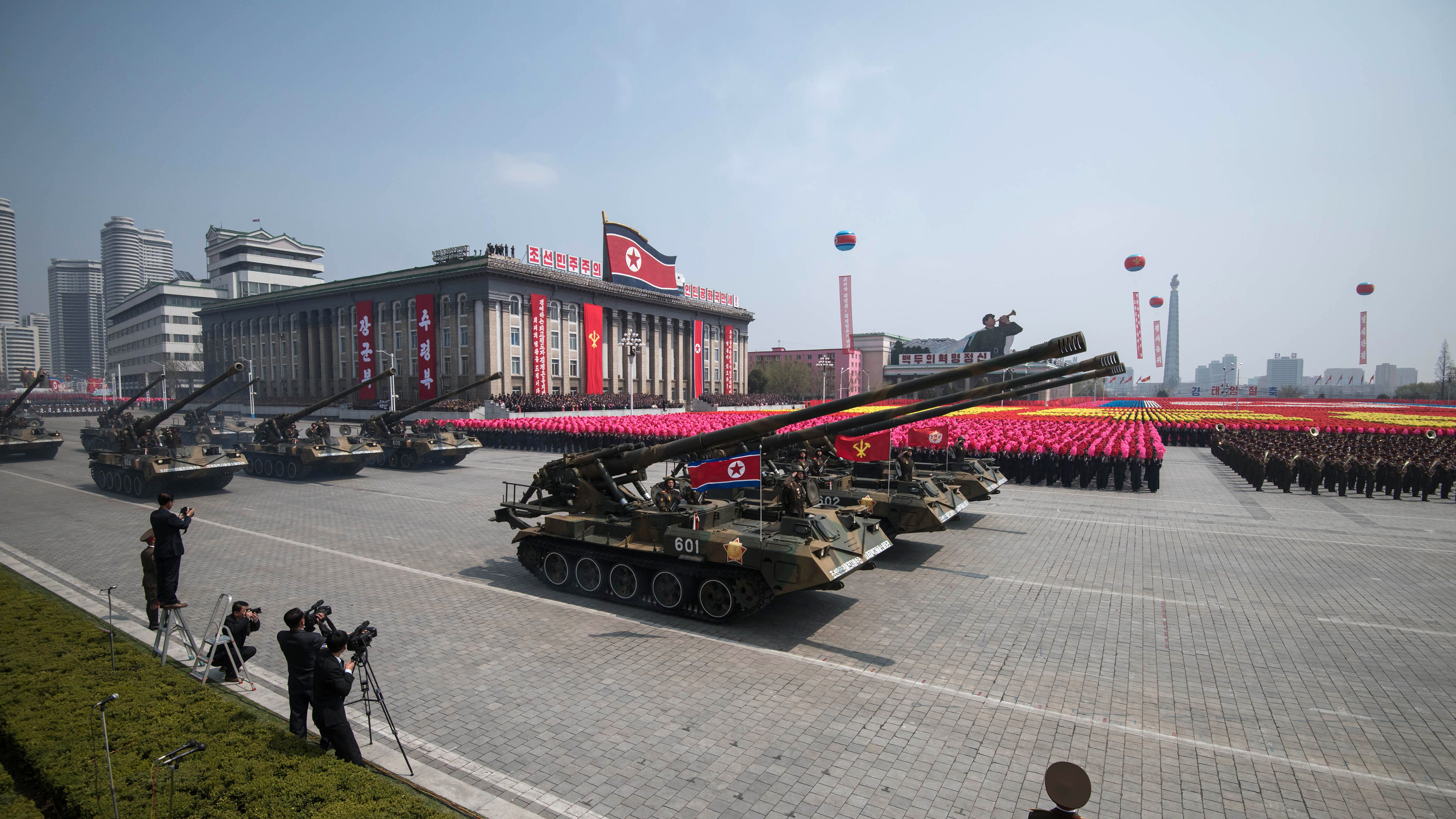 At the same time, the quality of South Korea's equipment is far better at every level, its aircraft and surface to air missile forces are far more advanced, and its Navy is far more capable. North Korea must rely largely on aging submarines and patrol boats to try to limit South Korean and U.S. Navy forces.

As for the United States, in spite of North Korean claims that imply the U.S. has a massive presence in South Korea, IISS reports only 28,500 troops, and recent shifts have left the number somewhere around 34,000. The U.S. Army has some 19,200 soldiers and only one active land forces armored brigade, although it also has helicopter and artillery forces. The U.S. Navy has some 250 personnel, and the U.S. Air Force has some 8,800. It normally deploys two fighter wings with 40 F-16s, 24 A-10s, and some intelligence aircraft. It is also worth noting that the U.S. exercises that the North complains about so loudly—to the point of threatening nuclear war—involve less than 20,000 personnel, and scarcely have posed any threat of attack.

The real U.S. challenge is the power projection of land- and sea-based airpower, cruise missiles and other precision strike capabilities, and the ability to deploy land forces and military resupply over time. The U.S. withdrew is nuclear weapons from South Korea in 1991, and has steadily cut is forces over time. It still had over 32,000 soldiers in South Korea in 1991—as the Cold War ended—and roughly twice the present number of combat aircraft. It is North Korean threats and attacks on its neighbor—and not a U.S. desire to keep projecting power—that have kept the U.S. from making further reductions over the last decade.

It is the sharp qualitative limits to North Korea's forces—and not outside threats—that explain why the North has chosen to focus on nuclear, chemical, and biological weapons, and on missiles. Its massive conventional forces are fully adequate to defend it against what is essentially a non-existent threat of South Korean and U.S. invasion—even if one ignores the deterrent impact of China's ability to respond. They also give the North a capability to intimidate South Korea to some degree. They do not, however, allow North Korea to go very far in pressuring the South.

Seoul may be in range of the North's artillery, but North Korea's fragile economy could be destroyed in days from the air by attacks on its power grid, communications, critical bridges and routes, and key industrial facilities. For all its forces and posturing, North Korea is, to some extent, the strategic equivalent of a Potemkin village. Hyper-militarization creates its own vulnerabilities if a conflict escalates too far, and like Iran, North Korea needs a threat to counter that risk.

North Korea can, however, almost certainly develop and deploy at least some form of nuclear-armed missiles capable of reaching the United States over the next half decade that will be that are accurate enough to strike at U.S. cities. It can almost certainly develop and deploy nuclear-armed systems capable of striking South Korea and Japan with the next two to three years.

It has created a major missile production base as well as steadily growing inventories of deployed and deployable systems. It can also now move beyond an easily targetable nuclear reactor at Yongbyon, and deploying what seem to be two centrifuge halls at the Yongbyon facility, to dispersing covert centrifuge facilities in new locations.

Survivable missile forces, nuclear weapons, and the ability to launch precision-guided conventional missiles, or ones with biological and chemical warheads are all ways that give North Korea’s leader the ability to maintain its threat to its far more successful neighbor. The deployment of such forces, and the increases in North Korean nuclear technology, steadily limit U.S. capability to carry out preventive strikes. They also enable North Korea to increasingly threaten the United States and Japan. They give North Korea more leverage over China by giving it the ability to escalate to levels that could force China to either intervene on its behalf or deal with its collapse. At the same time, North Korea's growing reliance on nuclear and missile weapons has other effects. It makes it steadily making it harder for South Korea to deter and contain North Korean threats at lower levels of force, and for the United States to respond with limited strikes or military options.

The may eventually push South Korea towards creating its own nuclear forces. South Korea wants stability and development, but the North can push it in different directions. South Korea is already developing its own missile forces—although largely limited to ranges that do not threaten China. Some reports indicate that South Korea once had elements of a covert nuclear weapons program, and it clearly has advanced its nuclear power. North Korea's actions could eventually push South Korea into deploying nuclear weapons and its own much larger missile forces—or confront the United States (and China) with a U.S. need to offer South Korea clear nuclear guarantees and steadily more advanced missile defenses.

Unless North Korea does limit or abandon its nuclear and missile programs, the prospects for the future steadily become ones of letting a failed state continuously threaten the stability of South Korea and the security of China, Japan, and the United States—all of which can be drawn into any expansion of the Korean nuclear arms race. The end result of North Korea's effort to maintain its threat to South Korea may well end in doing no more than pushing all the military options in the Korean peninsula towards steadily higher levels of escalation.

© 2017 by the Center for Strategic and International Studies. All rights reserved.
Photo credit: ED JONES/AFP/Getty Images

The Other Sides of Renegotiating the JCPOA Iran Nuclear Agreement
By Anthony H. Cordesman
April 15, 2021
In the News

Afghanistan: Too Much Is Enough
By Anthony H. Cordesman
April 13, 2021
Commentary

China and Iran: A Major Chinese Gain in “White Area Warfare” in the Gulf
By Anthony H. Cordesman
March 29, 2021
Report

Afghanistan: Another Peace to End All Peace?
By Anthony H. Cordesman
March 11, 2021
On Demand Event