The Four Famines: The Alarm Bells Are Ringing, But Who Is Listening?

If there were a global siren to signal that a humanitarian crisis has tipped over the threshold to a catastrophic scale, it would be ringing loudly right now. Today, 20.7 million people are starving or at risk of starving in Yemen, Somalia, South Sudan, and northeastern Nigeria.

The media, particularly U.S. domestic outlets, have not given this situation the attention it so desperately warrants. The world is too distracted and distraught over political drama, (un)natural disasters, and protracted conflicts. Understandably so. If we don’t respond urgently, though, 2017 is poised to become the year that the world turned its back on a global food insecurity crisis of historic proportions. We still have time to listen to the sirens.

Q1: Did we know this crisis was coming?

A1: There has been ample warning. But reports on severe food insecurity compete with a flood of other news in today’s world; the word “famine” must be used by mainstream media (or pop music stars) for people to pay attention.

For those in the humanitarian and international development space, the first alarm bell rang in February 2017, when the United Nations officially declared famine in South Sudan. A famine diagnosis means that at least one in five households faces an extreme lack of food, that more than 30 percent of the population is suffering from acute malnutrition, and that at least two people out of every 10,000 are dying each day. (The Integrated Food Security Phase Classification system, or IPC, standardizes this measurement on a five-phase scale; famine is the most extreme category.)

The slow-onset nature of the crisis means that vulnerable communities have already suffered for months and that preventable deaths have already occurred by the time that famine is declared. During the Somali famine of 2011, over half of all casualties occurred before the official declaration. At least 130,000 people died before the world took notice. A famine declaration also requires reliable data that may be difficult or impossible to obtain in conflict-affected areas where access is restricted. Famine-like conditions exist long before they are classified as such.

For the past several years, the U.S.-funded Famine Early Warning Systems Network (FEWS NET) has warned of the impending crisis. In early 2013, below-average harvests and restricted access to food in northeastern Nigeria were linked to civil insecurity instigated by Boko Haram. In January 2014, FEWS NET warned that violent conflict in South Sudan was “evolving into a major humanitarian crisis” and threatening to push affected populations into emergency levels of food insecurity, phase 4 out of IPC’s 5, the brink of famine. Across all four countries, consecutive years of drought caused by El Niño, prolonged conflict, forced migration, currency depreciations, rising food prices, and other factors were identified as harbingers of a crisis to come. In December 2016, FEWS NET announced that famine had likely occurred earlier that year in some inaccessible parts of Nigeria and could still persist. By January 2017, the threat of famine was identified in South Sudan, Somalia, and Yemen.

The global community was criticized—and rightly so—for reacting too slowly to the 2011 famine in Somalia responsible for the deaths of 260,000 people. Just six years later, the alarm bells are being ignored once again—this time in not just one country but four. 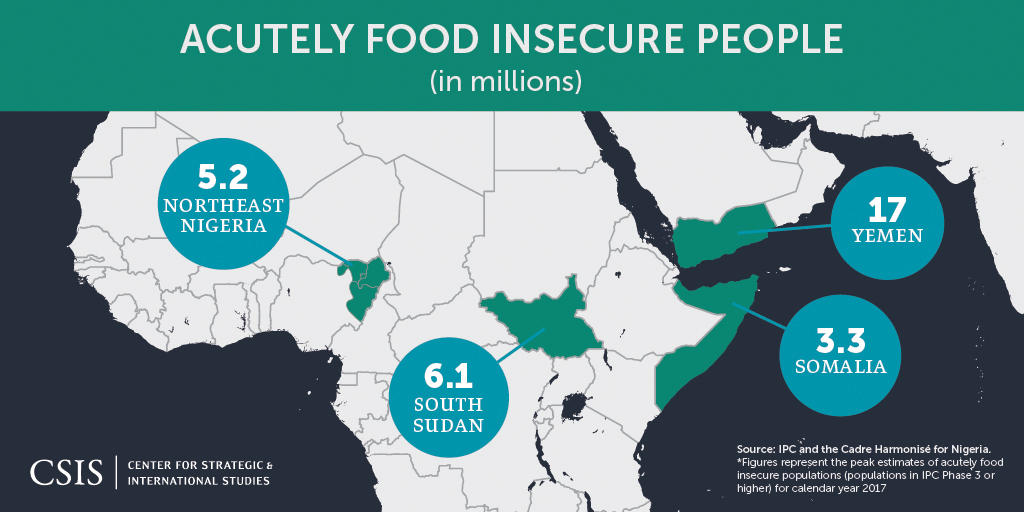 Q2: Is this humanitarian crisis really “unprecedented”? How does it compare to the past?

A2: The United Nations has described the current catastrophe as “the largest humanitarian crisis since the creation of the United Nations.” FEWS NET has warned that “the combined magnitude, severity, and geographic scope of anticipated emergency food assistance needs during 2017 is unprecedented in recent decades.”

These claims are not sensationalist. The concurrent nature of four food insecurity emergencies, each driven by its own cocktail of protracted conflict, volatile climate, and unstable governments, makes this crisis historic (and horrific). In addition to food insecurity, violence has caused the water and sanitation infrastructure in Yemen to collapse, fueling the world’s largest cholera outbreak with over 600,000 diagnosed cases. The deadly disease is now spreading across South Sudan and Somalia, exacerbating the crises there as well.

The man-made nature of famine and links to political instability are also nothing new. The Ethiopian government’s counterinsurgency military strategies, human rights offenses, and restrictive policies unquestionably contributed to the 1984–1985 famine. Just last year, Syrian civilians died of starvation in the blockaded town of Madaya, a single data point in a timeworn trend of food being used as a weapon of war.

Q3: How is famine related to conflict and U.S. national security?

A3: Last month, the UN Security Council issued a Presidential Statement explicitly linking the four looming famines to conflict for the first time, emphasizing that “ongoing conflicts and violence have devastating humanitarian consequences and hinder an effective humanitarian response…and are therefore a major cause of famine.”

Each of the four potential famines is compounded by protracted conflict. Houthi rebels clash violently with a Saudi-led coalition in Yemen; civil war rages in fragile South Sudan; and the Boko Haram insurgency precipitates conflict and displacement in northeastern Nigeria. In Somalia, food insecurity sparked by consecutive droughts and mounting food prices has been intensified by the actions of the militant group al Shabaab, which is blocking humanitarian access to territories under its control.

Conflicts limit access to food by disrupting planting and harvesting activities; destroying livelihoods; inhibiting the free movement of goods (both between countries and within them); displacing affected populations; and limiting humanitarian access. They thwart development progress, inhibiting two conditions that never coexist with famine: good governance and shared wealth creation.

Food insecurity can also give rise to or exacerbate conflict and instability. Hunger and desperation provide fertile ground for social and political uprisings and extremism. Food price spikes in 2008 and 2011 sparked food riots in over 40 countries worldwide, contributed to the Arab Spring, and prompted the violent ousting of the prime minister of Haiti. The Islamic State, al Shabaab, and other terrorist groups routinely use food as a recruitment tool.

These dynamics create a vicious cycle of hunger and conflict: food insecurity leads to conflict, which impedes access to food. Food security is a linchpin of long-term stability in fragile, conflict-prone countries. Thus, eradicating global hunger and fostering resilient food systems should be key pillars of U.S. national security strategy.

Q4: What is the United States doing to help?

A4: The United States remains a global leader in humanitarian response and is the largest donor in all four countries. In FY2017 alone, the United States has committed over $1.8 billion in humanitarian assistance to this crisis. This includes an additional $639 million that President Trump pledged at the G20 Summit in July, an announcement that failed to receive significant media attention. Despite the U.S. government’s generous contribution, the UN Office for the Coordination of Humanitarian Affairs has received only a little over half ($2.7 billion) of its $4.9 billion response appeal to date.

U.S. leadership in the fight against famine has unfortunately been diluted by the Trump administration’s proposal to cut funding for foreign aid and diplomacy by a third in fiscal year 2018. While a swift humanitarian response is required to save lives in the four famine countries, strategic long-term investments are equally necessary to prevent these crises from recurring.

First and foremost, food security can only be restored through an end to protracted conflict and violence. This makes peacebuilding absolutely essential. But the FY2018 White House budget proposal would slash peacekeeping funds by half. A reduction of this magnitude would severely limit the capacity of the United Nations—which relies on U.S. resources to fund 22 percent of its peacekeeping budget—to resolve these crises. Investment must also be funneled into long-term development initiatives that tackle the underlying causes of poverty, hunger, and instability. The UN Food and Agriculture Organization estimates that roughly 80 percent of those affected by these crises rely on agriculture for their livelihoods. The importance of resilient agriculture sectors to both household welfare and national stability cannot be overstated. For countries like Yemen, which imports 90 to 95 percent of its staple foods, sustainable access to food produced elsewhere is also critical. Finally, famines don’t strike in countries with good governance, and there is good reason for that. Well-functioning institutions are critical to conflict prevention and must be strengthened if future crises are to be averted.

Q5: What are the long-term effects of famine?

A5: The effects of hunger and malnutrition ripple far beyond the point when famine is officially declared “over.” The most devastating long-term consequences of famine are inflicted on children. Malnutrition experienced at a young age—particularly during the first 1,000 days of life, from pregnancy through a child’s second birthday—causes irreversible physical and mental stunting. The lifelong effects of stunting include impaired cognitive abilities and learning capacity, lower productivity and earnings potential, and increased risk of chronic diseases. Famine and conflict can also prevent children from attending school, robbing them of a formal education and threatening to leave behind a “lost generation" of children. As of April of this year, 1,449 schools in Yemen had been damaged in the conflict, and one in four children were out of school.

Famine leaves an indelible mark on any society it impacts. The World Bank estimates that the loss of productivity and economic growth caused by malnutrition can cost countries in Africa and Asia up to 11 percent of their gross domestic product. Increased health care costs associated with malnutrition hamstring already thin national budgets. Disturbing recent studies even show that hunger can leave epigenetic markers on the DNA of children and grandchildren descending from famine survivors, which can bring negative health consequences along with them. Finally, famine drives mass migration, leaving populations displaced at home and seeking refuge abroad. Roughly 1.93 million South Sudanese have fled the country since violence erupted in 2013, making it the fastest growing refugee crisis in the world. 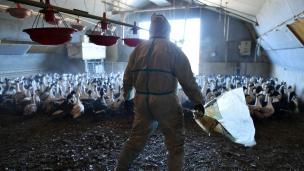