France: A Bridge between Europe and the Indo-Pacific?

An attack submarine patrolling the South China Sea to reassert the freedom of navigation; a frigate deployed in the East China Sea to enforce UN sanctions on North Korea; an amphibious group sailing for the next six months from the Mediterranean to the Pacific Ocean. Over the last few months, the French Navy's operational activity has been particularly intense in the Indo-Pacific, speaking to an ambition to be a credible player in this increasingly contested region. With an extensive territorial presence, coupled with naval projection capabilities and active diplomatic engagement, France seeks to be a more committed actor in the Indo-Pacific and to serve as a bridge between Europe and this strategic region.

A Nation of the Indo-Pacific

France sees itself as an “island state” in the Indo-Pacific due to its numerous overseas territories across the region (e.g., Mayotte, La Réunion, New Caledonia, and French Polynesia), which are home to 1.6 million French citizens. These territories provide to France the second-largest exclusive economic zone in the world, with 11 million square kilometers, second only to the United States. Along with this extensive maritime footprint, France shares borders with five countries in the Indian Ocean and 12 in the Pacific Ocean.

Economic ties between France and the Indo-Pacific have grown significantly over the past years. More than one-third of French exports to non-EU countries go to the region. French direct investments amounted to 320 billion euros in 2018, a 75 percent increase since 2008. More than 7,000 French subsidiary companies are present in the region, with revenues increasing by 40 percent between 2010 and 2016.

This human, geographical, and economic connection with the Indo-Pacific is complemented by a significant military presence. For the French Ministry of Defense, the Indo-Pacific is divided into several “areas of responsibility” where 8,000 soldiers and dozens of ships are pre-positioned in several bases. The primary purpose of these forces is the protection of the French territories, encompassing various mission such as combating illicit trafficking or providing assistance in the event of natural disasters. This substantial force accounts for nearly 60 percent of France’s permanent military presence overseas. 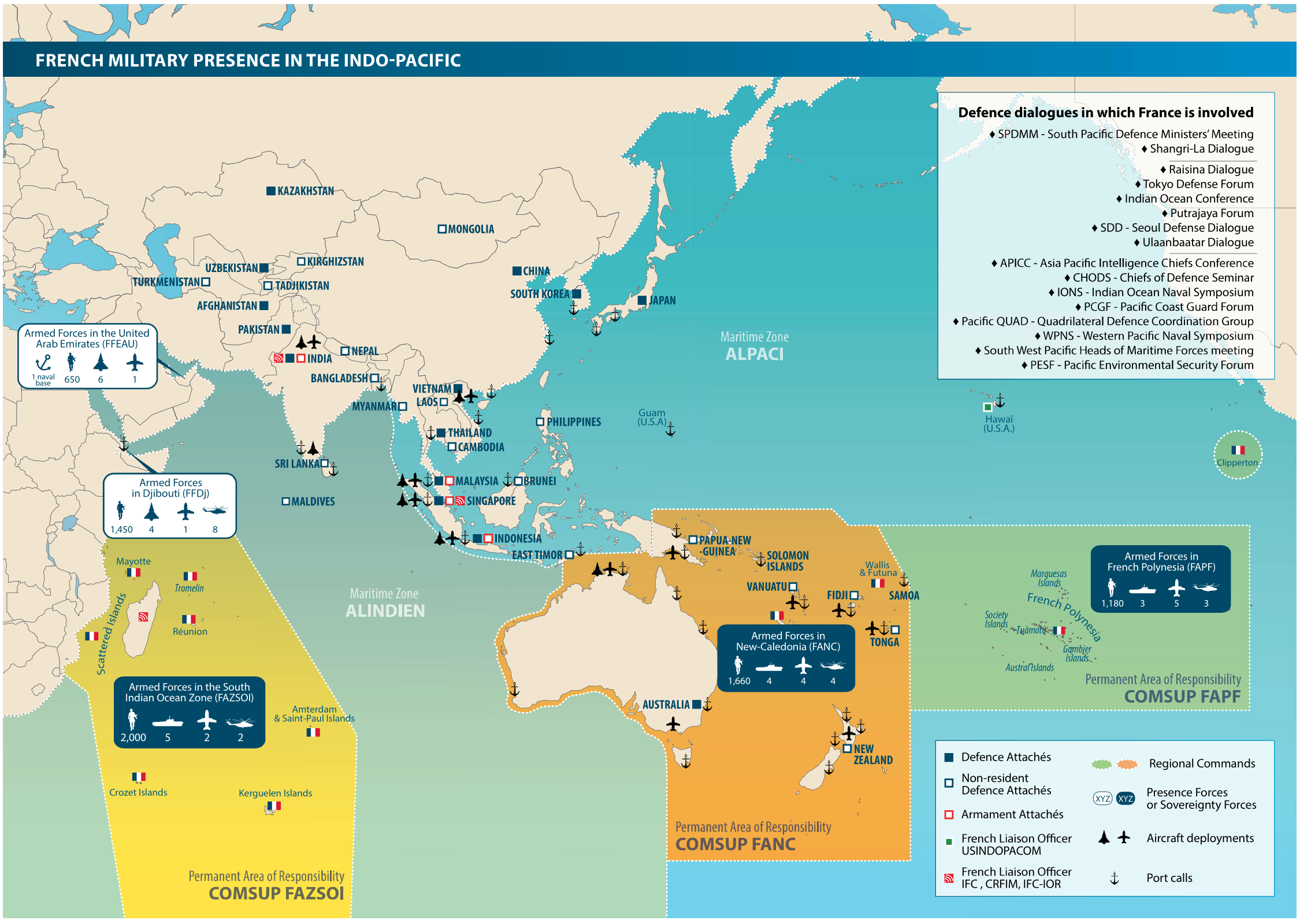 Credit: Ministry of the Armed Forces of France

The French Pivot to the Indo-Pacific

Since the 1990s, France has increased its involvement in the Indo-Pacific and has engaged in high-level dialogues with various countries in the region to strengthen military partnerships, participate in maritime exercises, and take part in regional fora such as the South Pacific Defense Ministers' Meeting or the Indian Ocean Naval Symposium. Paris’ strategic partnerships with New Delhi and Canberra represent the centerpiece of its long-standing diplomatic efforts.

France sought to provide India with military sales options (e.g., fighter aircraft and submarines) during the Cold War to shift its military reliance away from the Soviet Union. After the Cold War, Paris used its relationship as a major defense partner of New Delhi to continue to promote its strategic relationship, which, although questioned at the time, served as a bridge to promote a reconciliation of sorts between India’s nuclear weapons program and the global nonproliferation order following India’s nuclear tests in 1998.

Similarly, France strived to play a more constructive role in the Pacific region in the 1990s, notably by ending the highly controversial nuclear tests in French Polynesia in 1996 and by endorsing an autonomy process for New Caledonia with the signing of the Nouméa Acccord in 1998. This decision helped facilitate an improved bilateral relationship with Canberra and the region as a whole. In 2016, New Caledonia and Polynesia became full members of the Pacific Islands Forum with the support of Australia. This decision was a symbolic recognition of France as an enduring Pacific country.

As a logical continuation of these small but steady steps, Paris ultimately decided to embrace the “Indo-Pacific” concept in 2018, making France the first EU country to adopt this notion, which was first used by Japan in 2007 and Australia in 2013. In a speech delivered at the Garden Island military base in Sydney on May 3, 2018, President Emmanuel Macron described France as an “Indo-Pacific power” for the first time and unveiled the outlines of the French strategy toward the region, complemented by defense guidelines.

In adopting this concept, France recognized the coherence of the region as well as its growing geopolitical centrality. The geographical definition of the Indo-Pacific often differs from one country to another. France’s concept is quite extensive, stretching “from Djibouti to Polynesia.” This signals France's intention to place as much importance on the Indian Ocean as the Pacific. In contrast, the United States has a more narrowed definition, stopping the Indo-Pacific at India’s shores.

Geographical definitions aside, France’s strategy fully acknowledges the geopolitical challenges of the Indo-Pacific. Paris is particularly concerned by China’s “assertive attitude,” which aims at having access to the global commons and redefining the strategic balance in the region. The resulting tensions could lead to military conflict in a region that lacks a credible regional security architecture beyond U.S. bilateral security guarantees.

Against this backdrop, France is focusing its efforts on striking an equilibrium between the indispensable balancing against China with the need to avoid an escalatory posture toward Beijing. France sees itself as a “mediating, inclusive and stabilizing power” that aims to promote a “stable, law-based and multipolar order” in the region. Among the French lines of action, three are particularly noteworthy.

First, France is prioritizing improving the regional military balance. Over the past few years, Paris has significantly deepened its strategic partnerships with countries with whom it shares similar values and interests, namely Australia, India, Japan, South Korea, Indonesia, New Zealand, and Singapore, through arms cooperation, enhanced information sharing, or joint maritime exercises. Recent examples include India’s decision to acquire 36 Rafale jet fighters or Australia’s contract with French shipbuilder Naval Group to produce 12 attack submarines. French regular naval deployments in the region are also closely coordinated with its partners, as witnessed by aircraft carrier Charles de Gaulle’s mission in 2019 in which it conducted naval-air training operations with Japan, India, the United States, and Australia.

Second, Paris is a strong proponent of multilateralism as a pillar for the stability of the Indo-Pacific. France has joined various regional fora across the region, such as the South Pacific Defense Ministers’ Meeting (in 2003) or the Indian Ocean Rim Association (in 2020). Paris is also partaking in coalitions with like-minded partners like the Pacific Quadrilateral Defense Coordination Group with Australia, New Zealand, and the United States and the so-called “Paris-Delhi-Canberra axis” advocated by President Macron in 2018, which held its first trilateral dialogue in September 2020. Through these different groupings, France aims to promote enhanced regional cooperation on issues ranging from maritime security to sustainable development.

Third, France actively supports Europe’s engagement in the Indo-Pacific. It has contributed to the increased presence of the European Union in regional fora, the most recent example being the agreement of a strategic partnership with the Association of Southeast Asian Nations (ASEAN) in December 2020. Paris has also played a driving role in promoting a common European position on the Indo-Pacific. Alongside Germany and the Netherlands, France has contributed to the drafting of the European Union’s Indo-Pacific strategy, which is expected to be adopted this April. France has also launched a dedicated working group on the Indo-Pacific within the European Intervention Initiative, which aims to foster practical cooperation between the military staffs of its 14 members. Finally, France is helping to strengthen European naval visibility in the region, most notably by regularly aggregating European assets in its maritime patrols. For instance, ships from Italy, Portugal, and Denmark accompanied the Charles de Gaulle on its mission in 2019. France and the United Kingdom are also expected to increase the coordination of their maritime deployments in the region.

As the new U.S. administration moves full speed ahead toward the Indo-Pacific, there is now room for greater cooperation between Washington and Paris. Notwithstanding its rich defense cooperation with the United States, France has of late preferred to distance itself from U.S.-China tensions, which it perceived as contributing to the polarization and instability of the region. The situation is now different, as the Biden administration has proposed a more balanced strategy that combines competition with Beijing and greater cooperation with U.S. allies and partners.

Given its long-standing presence in the Indo-Pacific, France could play an important role in U.S. strategy by contributing to greater coherence of efforts from like-minded countries across the region. It has already started this with the France-India-Australia dialogue. France could also help drive EU policy toward the Indo-Pacific and ensure that Europeans play a valuable and coordinated role in the region. An “island state” of the Indo-Pacific, France and the United States can work more effectively together to effectively compete with China.

Pierre Morcos is a visiting fellow with the Europe, Russia, and Eurasia Program at the Center for Strategic and International Studies (CSIS) in Washington, D.C.

Asia , Europe , Defense and Security , and Geopolitics and International Security