The proposed FY2020 defense budget is scarcely without merit. Meeting the request would fund many badly needed increases in readiness and major new programs within each service. At the same time, it is also a major failure. The Defense Budget Overview of the FY2020 budget issued by the Office of the Secretary of Defense calls it a "strategy driven budget," but neither the Overview – nor the hundreds of pages of supporting justification provided by the OSD Comptroller and military services – focus on strategy, key threats, net assessments of U.S. and threat forces, and the budget’s impact on key commands and missions.

These issues are explored in depth in a new Burke Chair analysis of the proposed FY2020 budget. This study is entitled The FY2020 Defense Budget and the Need for a Real Strategy Driven Budget. It is available on the CSIS web site at https://csis-website-prod.s3.amazonaws.com/s3fs-public/publication/190301_FY2020_Fiscal_Balance.Final_.pdf.

The analysis calls for a return to real planning, programming, and budgeting. The current FY2020 budget request documents describe spending by military service and focus on the coming fiscal year, rather than tie plans, programs, and budgets together by major mission and strategic goal. They are not justified in net assessment terms and do not address the role of strategic partners. They instead present an “input budget” in the form of a jungle of line items which – if explained justified at all – are done so by military service.

When documents like the Defense Budget Overview do touch on strategy, they almost always do so by describing broad goals. They make little attempt to tie spending requests to either the new National Security Strategy the Administration issued in December 2017, or the National Defense Strategy that it issued in early 2018 It does not define how the U.S. will deal with Russia, China, North Korea, nor Iran in any detail. It presents no clear plan to fight terrorism or extremism.

There is no meaningful form of program budget, and no clear replacement for the annual posture statements of the Secretary of Defense and Chairman of the Joint Chiefs issued in the past. There is no way to know how the budget request will shape the capabilities of Department's 10 combatant commands, and how it will affect their "geographic or functional mission" and "command and control of military forces in peace and war."

Accounting by Service has its value, but U.S. strategy is shaped by joint operations and joint warfare, by U.S. capabilities in given regions of the world, and by global capabilities in areas like cyber, space, strategic, and global transportation power projection operations. The so-called "strategy driven budget" does not really address any of these areas, describe the related the role of our strategic partners, provide summary net assessments of potential threats, or describe and justify a related Future Year Defense Program for each command.

It is poorly structured even as a service-by-service input budget. Rather than submit a unified defense budget, the Department requests a defense budget that is divided in into separate blocks that sometimes are so poorly defined that it is almost impossible to determine what spending levels actually apply to given spending categories. After some eighteen years of wars, the budget still does not present a credible total cost or budget for any given war.

Serious questions also emerge as to whether the defense budget request includes all of the spending that should be included in the total U.S. defense budget – particularly in the case of the growing cost of nuclear weapons and veterans care. At the same time, there is no clear way to relate any aspect of spending on defense to the cost of the civil aspects of national security like foreign aid. No attempt is made to deal with the potential problems caused by the major cuts that the FY2020 budget request makes in federal spending on foreign aid and the civil aspects of national security.

Finally, the entire budget submission is centered around the assumption that the U.S. needs more defense spending – rather than to spend more wisely on the right forces and missions. Yet, comparisons of U.S. spending with that of the key potential threats identified in the new National Defense Strategy shows that the U.S. spends vastly more on military forces than Russia and several times more than China. It also shows that for all the angst over NATO European burden sharing, the NATO European countries collectively spend many more times than Russia.

At a minimum, the U.S. needs a real "strategy driven budget." It needs to focus on key missions and regions, and do far more to justify military spending in net assessment terms. It needs to understand why the U.S. and its allies spend so much more than key threat countries. It needs to fully justify requests for more – rather than better – spending. Simply asking for more, without putting budget requests in areal strategic content – or providing serious justification – is simply not an acceptable way of creating an effective U.S. strategy. 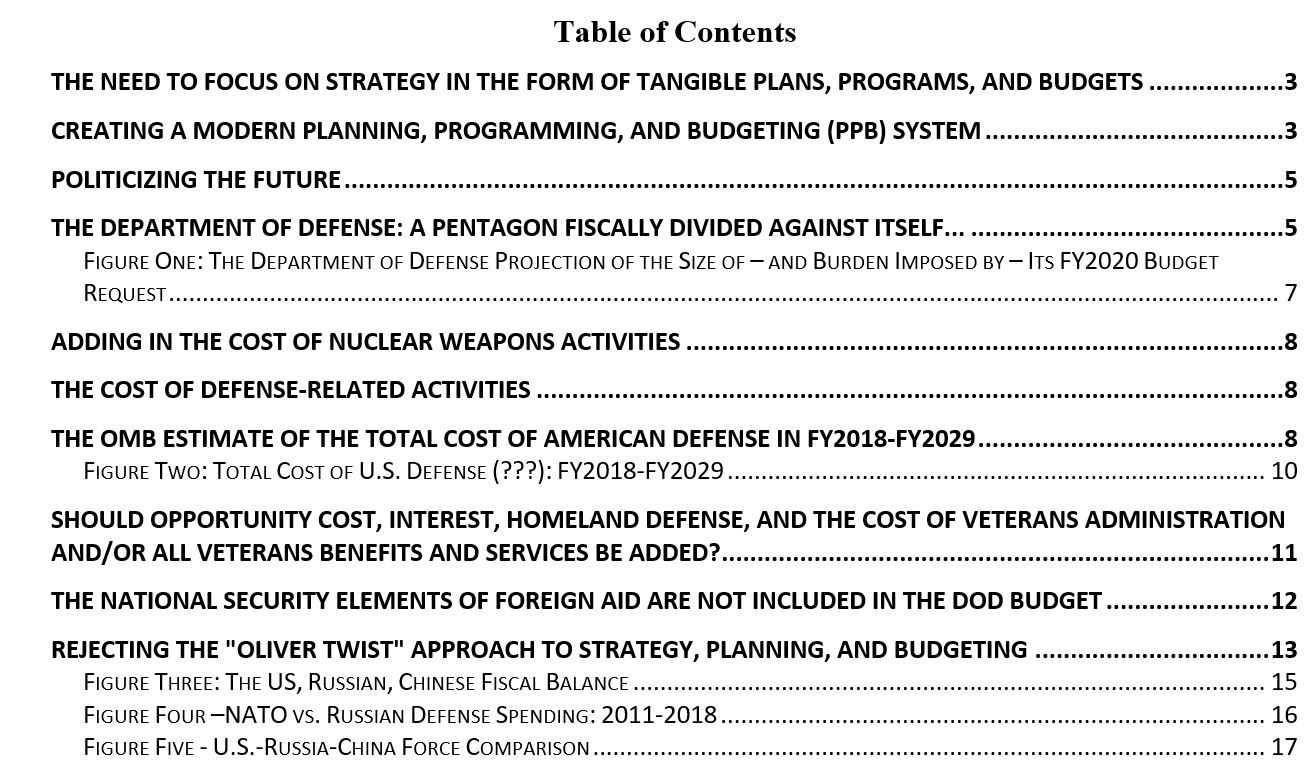