Clockwork Implementation for the Iran Nuclear Deal by Sharon Squassoni
After a rocky start that featured heated debates in the U.S. Congress and in the Iranian Majlis, the Iran nuclear deal (officially known as the Joint Comprehensive Plan of Action, or JCPOA) is moving forward.

What Is DoD’s Mergers & Acquisition Policy Anyway? by Andrew Hunter
Frank Kendall’s comments after Lockheed Martin purchased Sikorsky that alluded to significant policy concerns with defense industry consolidation at the higher tiers of the supply chain set off alarm bells, not just at Lockheed Martin headquarters in Bethesda, but in defense industry C-suites around the country.

The Long View of the Counter-ISIL Strategy by Tracy Onufer
With last month’s one-year anniversary of the U.S. government’s strategy to counter the Islamic State of Iraq and the Levant (ISIL, the government’s preferred moniker), there is a growing cacophony of voices questioning why there is not more progress in the White House’s stated goal to “degrade and ultimately destroy ISIL.”

U.S. Coast Guard–Cuban Border Guard Cooperation: Opportunity to Leverage an Established Relationship by Mike Cribbs
U.S. foreign policy toward Cuba has changed dramatically since last December, culminating with the U.S. embassy reopening in Havana. While Cuba-U.S. relations over the past 50 plus years have been adversarial, there are areas where the two have collaborated.

Washington Seeks Policy Coherence on China by Jacob Berah
If policies are solutions to problems, it’s hard to articulate good policy when you’re unsure whether there is a problem or what the nature of that problem is. Arguably, the United States has only relatively recently accepted that China may pose a serious problem for its continued preeminence and stewardship of the liberal order in Asia.

Does European Public Opinion Make A Difference? by Gabriel Coll
In his last speech as secretary of defense, Robert Gates expressed serious concerns about NATO’s future and the capabilities of its European members. Speaking about the 2011 NATO mission in Libya, he argued that despite the campaign having widespread political support, few countries had the military capabilities to participate directly in combat operations. 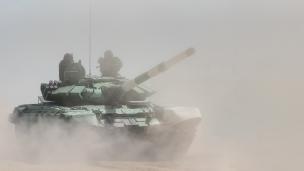