Thinking about the Unthinkable by Mark Cancian
Nuclear battlefields are back. After two decades of being considered a Cold War anachronism, the tactical use of nuclear weapons is again on the agenda. North Korea now has nuclear weapons and threatens to use them.

NATO Enlargement: Getting to “Yes” on Montenegro by Lisa Samp
The NATO Alliance will grow from 28 to 29 members with the addition of Montenegro in the next year or two. The enlargement process formally commenced at a December 1–2 meeting in Brussels where NATO foreign ministers unanimously agreed to invite the small Balkan country of fewer than 650,000 people to begin accession talks with the alliance.

A World on Fire or Echoes of the Cold War? by Greg Sanders
The horrors of the war in Syria, terrorist attacks, burgeoning refugee crises, the annexation of Crimea, and South China Sea disputes continue to prompt fears about the world’s direction.

Kremlin Presents an Intractable Challenge in Europe for the United States by John O'Grady
Russia’s irredentist and revisionist narrative, coupled with its willingness to use military aggression irrespective of basic protocols of international law, creates an unstable security paradigm in Europe.

20,000 Drones Under the Sea by Andrew Metrick
Early in November 2015, Russia let slip that it is in the process of developing a new unmanned underwater vehicle (UUV), or as it is more commonly called, an underwater drone. 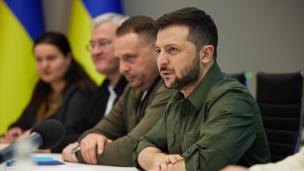 Why does Ukraine need longer-range weapons from the US?
Financial Times | Felicia Schwartz
June 2, 2022
In the News

US to Send ‘Advanced Rocket Systems’ to Ukraine
Voice of America | Anita Powell
June 1, 2022
View all content by this expert