By now, everyone knows that the world is flush with natural gas. Commodities go through cycles, of course, and gas is no different—today’s oversupply is tomorrow’s undersupply, and up and down the roller coaster we go. But this glut feels different. For one, it is an unusual glut. There is too much gas in the market, plunging spot prices in North America, Europe, and Asia, but there is also record investment in new supply for liquefied natural gas (LNG). It is, in other words, a downward super cycle, where record oversupply is coinciding with record-level investment in new supply. What exactly is happening, and how might it play out? 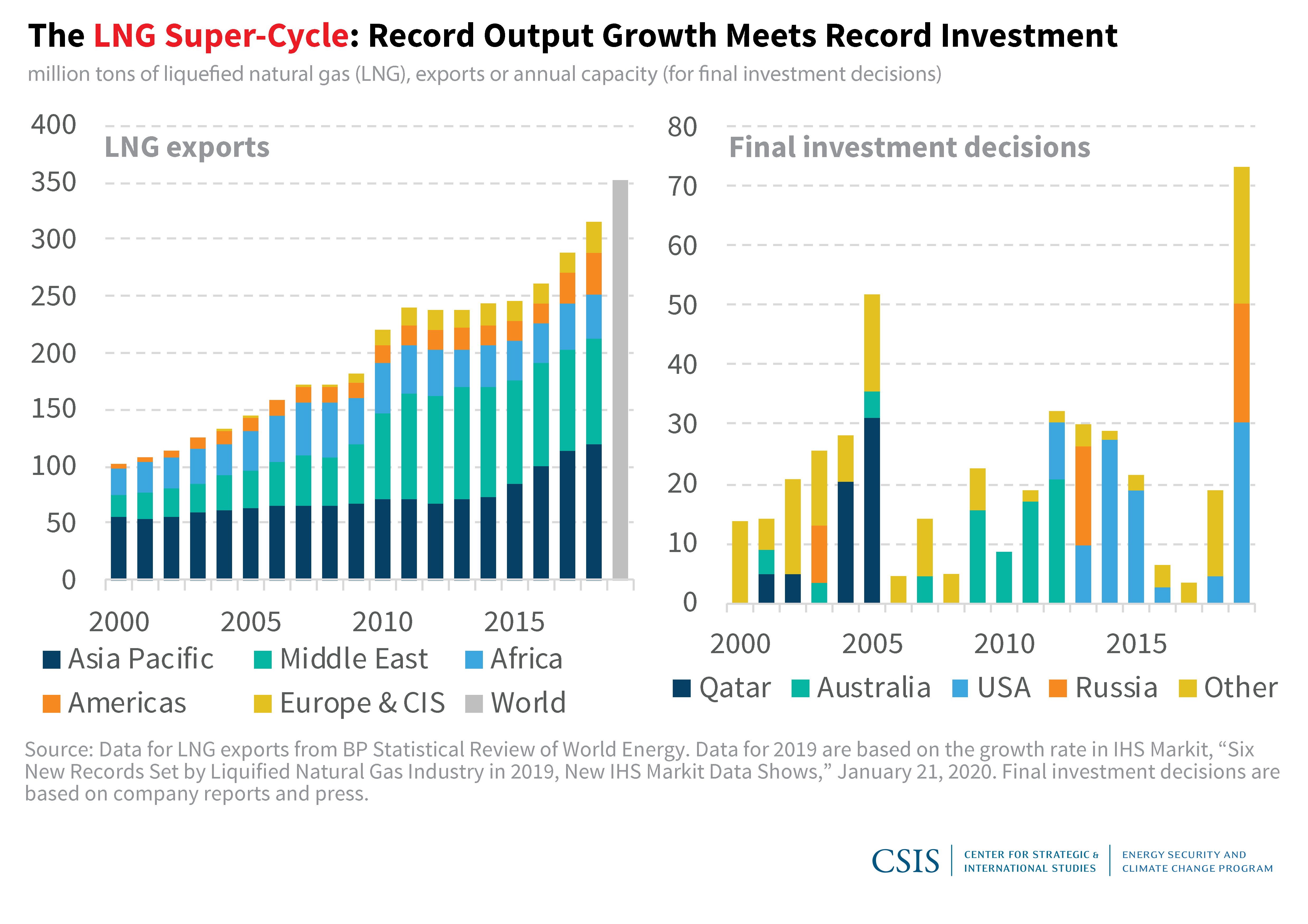 Two forces are coinciding to produce this moment. The first is the steady growth in U.S. gas supply, which keeps rising and rising, fed by a mixture of gas associated with oil production, cheap capital, and incentives that favor production growth above all else. Gas is looking for any evacuation route—via pipeline to Mexico, into a power plant or a liquefaction facility; or, if nothing else is available, it is merely vented or flared on the spot.

The second force is the recognition that, by mid-century, our planet must be on some trajectory toward net-zero greenhouse gas emissions. It takes four to five years to construct a brand-new liquefaction facility, and the investment decision is usually made on a 20-year horizon. Even the most cynical investor or lender, one who thinks the transition to low-carbon energy sources will be slow, will ask a tough question or two about what gas demand will look like in 2045.

These two forces are producing some perverse incentives and dynamics. The push to build new projects has a fire-sale feel to it—a recognition that if a project does not begin construction in the next three to five years, it may never be developed. Resource holders from around the world are looking to squeeze through that window, resuscitating projects long stalled (Nigeria), leveraging the economics of liquids (Qatar), or relying on heavy state support (Russia). There is a logic to wanting to be first in line for a new wave of project development, especially if first movers can dissuade their competitors. But the queue keeps growing and growing.

The interplay between North America and the rest of the world adds an extra wrinkle to this dynamic. The word “glut,” in fact, encompasses two dynamics: there is a problem of over-supply in the United States and a problem of insufficient demand in the rest of the world. In a normal market, the price would move up and down until it equilibrated. But that mechanism is severed in part because U.S. gas supply is not very responsive to price.

In the United States, the problem of oversupply has an obvious solution: build new demand for gas, chiefly by sending it overseas. But exporting LNG from the United States is an arbitrage game—it only works if prices in the United States are lower than prices everywhere else. What makes sense from the perspective of the United States inevitably adds more gas to a global market that already has too much and undermines the commercial case for existing or new exports (even if existing projects are often insulated by long-term contracts that guarantee revenues).

In theory, the solution to this predicament would be foreign demand. Countries around the world would seize on cheap gas to push out coal from their power sectors or oil from their industries and buildings, and perhaps even try to use LNG into their transportation sectors—heavy-duty trucking or shipping. This is not happening, at least not at scale. Many consumers are still exposed to oil-linked gas prices, which remain prohibitively high. (China paid almost $10 per million British thermal units for LNG in 2019, far above where spot prices hovered.) And, of course, it takes time to construct the facilities to import gas from scratch.

But when new markets pop up, they tend to flatten out after a few years—LNG grabs a share of the market but fails to keep growing it. Consider this: there are 21 countries that started to import LNG after 2008 (through 2018); together, they accounted for about 13 percent of global imports in 2018. In half of those markets, LNG keeps growing, sometimes quickly (e.g., Pakistan), sometimes slowly (Thailand or Poland). But in most other markets, LNG has reached a plateau (Chile, Kuwait, Malaysia, Jordan). In some cases, imports have even declined, usually due to rising domestic production (like Argentina and Egypt).

This challenge is evident in the early signals we have for how 2019 played out. During a period of record-low prices, the two main growth markets were the United Kingdom and France—not exactly the emerging economies that LNG suppliers have in mind when they build new projects. Imports fell in many of the large Asian countries, and even in China, there has been a major slowdown in imports in 2019 (even before accounting for the impacts from the coronavirus).

So how will this glut play out? One path is that we just see a prolonged period of oversupply, a price low enough that producers and exporters barely make money but not low enough to trigger a serious demand response. We might, in other words, relive 2019 over and over again. Or we might see a more concerted effort to create demand. This path will hinge on suppliers being willing to invest in import infrastructure and perhaps even transmission, distribution, and power plants; and countries finding ways to support gas over coal or oil through a combination of regulation, policy, or taxes. Otherwise, we might face a prolonged glut that is the worst of both worlds: prices too low for companies to make a return but too high to enable gas to play a more meaningful role in the global energy transition.