Is Gas Winning? It Depends

The gas industry is gathering in Washington this week for the triennial World Gas Conference. The venue was chosen years ago, before Donald Trump was a candidate for president, but his administration could not have hoped for a better setting to tout “energy dominance” and make a pitch for American energy. Yet American exuberance will clash with a world still undecided about gas.

Take a macro view, and gas is in good shape. In 2017, demand grew by 3 percent, almost twice as fast as oil (1.7 percent) and three times faster than coal (1 percent). The 10-year growth rates are similar, with gas outperforming other hydrocarbons (data from the BP Statistical Review of World Energy). As such, the world relied on gas for over 23 percent of its energy needs in 2017, the highest number ever, as gas displaced both oil and coal. Relative to 1973, when gas was seen as a solution to the insecurity created by the first oil shock, no single fuel has gained more market share. This substitution has been essential: since 1965, almost half of the growth in gas demand has come from fuel switching.

The future is similarly seen as bright. In the International Energy Agency (IEA) baseline scenario, gas grows at 1.6 percent a year through 2040, versus 1 percent for energy overall, and much faster than either coal (0.2 percent) or oil (0.4 percent). Even in a scenario where the world meets its sustainable development goals, demand will merely plateau for gas rather than decline, as it must for oil and coal. By 2040, gas will even overtake oil in the IEA’s “sustainable development” scenario. BP shows a similar picture in its “evolving transition” scenario—gas is just below oil in 2040. Companies are investing billions to build pipelines, liquefaction facilities, regasification terminals, vessels, power plants, and distribution networks, while also pushing gas into new markets and sectors. This is a good era for gas.

Look closer, however, and the picture is more nuanced. In some regions, gas is gaining market share; but in others, it is not. In a world where energy consumption is growing more slowly, the ability to compete by defending or growing market share will be crucial. And by that measure, gas has a mixed record.

The most obvious success story is the Middle East, which is continuing a decades-long transition from oil to gas. In 1965, the region generated almost 95 percent of its energy from oil and about 4 percent from gas. By 2015, gas had overtaken oil and was still growing. More impressively, gas has made gains across power generation, industry, and buildings, although gas penetration in the buildings sector plateaued in the mid-2000s (sector-level data from IEA’s World Energy Balances). No other region relies more on gas for its energy needs than the Middle East. 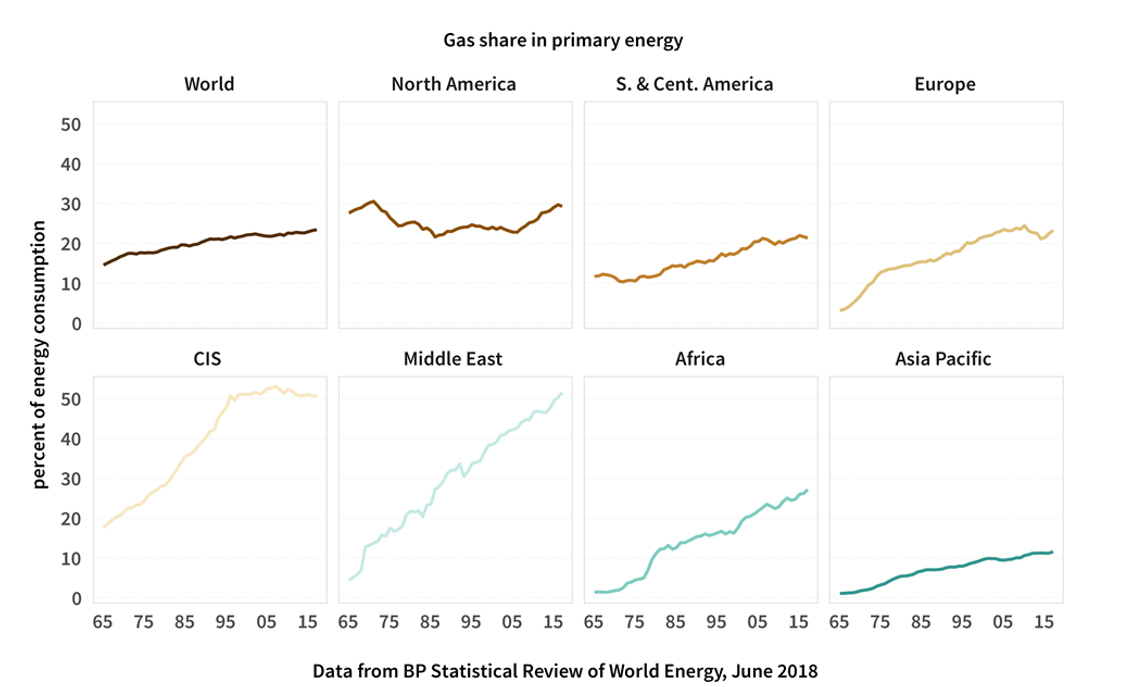 North America is another clear success, supercharged by shale. In the United States, gas decimated coal in power generation and has made a comeback in industry. But gas is just recouping lost ground. In 1965, the United States relied more on gas than it does today—renaissance is the right word. More importantly, gas has hit some limits. Gas use in power generation fell in 2017, and gas has struggled to nudge coal in certain coal-heavy regions. Generation from renewables, chiefly wind, is growing rapidly, and in some parts of the country, by either displacing coal and gas or capping their growth. Outside power generation and industry, gas is largely maxed out.

Elsewhere in North America, gas penetration has increased in Canada, largely due to oil sands, with power being a saturated market. In Mexico, gas has grown by displacing oil in power, but is hitting against some limits—the final tranche to be displaced is both smaller and more difficult to reach. So even in the part of the world where gas has shown the most promise, one can see some inauspicious signs. Gas has regained its prominence, but whether it can surpass its past market share is unclear.

In the former Soviet Union, dubbed the Commonwealth of Independent States (CIS) in BP’s Statistical Review, gas has always retained a high share—just over 50 percent of primary energy. This share has changed little since the mid-1990s, once the disruptive collapse of the Soviet Union worked through the energy system, although it has declined relative to the peak in 2007. There too, it is power generation leading the way, with industry trying to regain past glory and penetration in buildings retaining a steady share over the last two decades.

Beyond these regions, gas has a weaker record. In Central and South America, gas penetration is exactly at the same level as in 2006, at just over 21 percent. In Brazil, gas grew as the country looked for a backup against the vagaries of hydroelectric power, but penetration has stalled. Growing renewables, excluding hydro, are challenging gas and could well place a limit. In Argentina, gas had an incredible run, reaching almost 50 percent of primary in 2000, but has since stabilized. In Chile, gas penetration today is half what it was before Argentinian exports were interrupted in the late 2000s. In Venezuela, gas was losing market share for two decades until 2014; it received a boost recently largely because the collapse in oil demand has made gas look good by comparison.

In Africa, gas penetration is growing, but this is largely due to Algeria and Egypt, which accounted for two-thirds of the continent’s gas demand in 2017. In South Africa, the region’s largest energy market, gas penetration is about 3 percent, and efforts to introduce liquefied natural gas (LNG) remain elusive. Gas demand has grown in Western Africa, centered around Nigeria, but the volumes are still modest, despite a penetration just above a third (Egypt consumes two-and-a-half times more gas than Western Africa). In East Africa, penetration remains at just 3.5 percent, up from 1.5 percent a decade earlier. And the discoveries there are likely to feed mainly export markets; there is a meager amount reserved for local or regional use. Elsewhere, gas can only be found in random pockets here and there. Improving energy access in Africa is one of the great unfinished tasks for the energy industry, and gas has yet to show it can play a meaningful role in solving this challenge.

In Europe, gas has been on a roller coaster. In the past three years, gas has made a comeback and regained some lost ground. But at 23.2 percent of primary energy, gas contributes less than it did in 2005. In buildings, penetration has peaked and is falling. In industry, gas lost market share in the 2000s and is still trying to rebound to earlier levels. In power generation, the growth in renewable energy has hit gas hard, while coal has fared rather well (even so, Europe and the United States rely on coal for a similar share of primary energy because coal in Europe was hit in earlier substitution waves). Gas has gotten a bump in a few markets, but it is unclear whether this is sustainable. And if there is one region that is most reluctant about gas, it is Europe. It is hard to imagine a place where gas has a poorer brand than in Europe.

In Asia, gas has had a mixed run. Penetration, at just over 11 percent, remains far below the global average and was stuck for five years, before receiving a China-induced jump in 2017. The country-by-country breakdown is not pretty. Gas is unambiguously gaining market share in China and Taiwan—and that’s it. And in both places, this is largely due to government policy to push gas against coal (China) or nuclear (Taiwan). Elsewhere in the region, gas is struggling. In countries going from self-sufficiency to (actual or planned) imports, gas penetration is flat or, more often, falling: India, Pakistan, Bangladesh, Vietnam, Thailand, Indonesia, Malaysia, Philippines. In advanced economies, such as Japan, Korea, and Singapore, gas has hit a wall—policy will play a big role in the future. In Australia, gas is gaining ground, but with high prices in the East, the good times might be short-lived. If Asia is the place to be in energy, gas has yet to show it can compete.

The Brand, The Future

In the grand scheme of things, gas has made inroads largely due to electricity and, less so, buildings. In industry, the world’s reliance on gas is exactly the same, at around 20 percent, as in 1971. In buildings, gas penetration grew until the mid-1990s but then stopped. Even today, at just over 21 percent, the share of gas is lower than in 1996. In power generation, gas had an incredible run, almost doubling its market share since 1973. Largely, it benefited from displacing oil, whose market share in electricity fell from over 25 percent in the mid-1970s to less than 5 percent (the substitution going first to nuclear, until the late 1980s, and then gas).

But this is no longer the world for gas. The prospects for oil displacement in power are modest. The next battleground is coal and, perhaps, renewables. But gas has not shown it can compete, at least not outside the United States and not without explicit policies that (indirectly) benefit gas. And therein lies the problem: most governments see gas as a way to reduce reliance on something else. It used to be oil, now it is coal. The gas business was built around oil displacement—think oil-indexed pricing. It cannot compete with coal, at least not until the externalities of coal are fully incorporated. And gas is now struggling to compete with renewables; at best, it can be a partner to counterbalance intermittency, although most of the empirical evidence shows this to be wishful thinking rather than actual practice.

Gas is thus seen as an expensive luxury in much of the world, especially Asia or Africa. Some countries, such as China, are willing to pay that price because they see second-order benefits, chiefly in health. Others like gas because it wins against some other fuel (like nuclear). In Europe, gas is seen as both a geopolitical and an environmental liability, which limits its appeal. Oddly enough, it is in places where no one is talking about gas as a bridge fuel where it is doing well—the Middle East and North Africa, for instance—although the region is unusual with its heavy reliance on oil in stationary sectors, as well as a near-complete absence of any other energy sources (like coal, hydro, nuclear, etc.).

For the past several years, the gas industry has treated this conundrum as a public relations challenge—and it is. But it is, fundamentally, an economic challenge. Even cheap gas from the United States is not really cheap by the time it reaches Asia, and the countries that are moving from domestic to imported gas are struggling to digest this more expensive commodity. Of course, the simplest way for the United States to promote gas exports would be to lead the fight against climate change; but alas, this is a nonstarter for this administration. And so we can expect America to proclaim “gas is great” this coming week while much of the world mumbles back “but it is expensive.”