Regional election results this month in the German States (Bundesländer) of Bavaria and Hesse as well as elections in Saxony, Brandenburg, and Thuringia in 2019 will usher in some of the most consequential political changes in Germany since the end of World War II. Typically, one would look at Germany (and Bavaria’s) strong economy, low unemployment (3.4 percent as of August 2018), and strong consumer spending as positive indicators that the current political forces in power would be rewarded at election time. But the exact opposite is occurring: traditional parties are being severely punished for not responding to the public’s concerns.  Global uncertainty and political stagnation have collided in Germany, and upcoming election results are likely to show more political fragmentation, continued weakening of the center, political disorientation and no clear direction for Germany’s future.

These dynamics have already emerged at the national level and have developed for the past few years. Known for its long-serving Chancellors, consensus culture and political stability, the arrival of the populist right-wing party “Alternative für Deutschland” (Alternative for Germany; AfD) has fully disrupted German politics. Equally disruptive has been the slow collapse of the Social Democrats (SPD), Germany’s oldest German political party. The previous German coalition government held 79.1 percent of all parliamentary seats between 2013 and 2018, while today’s coalition government of the Christian Democratic Union (CDU)/Christian Social Union (CSU) and the SPD holds only 56.3 percent. German political forces are simultaneously fragmenting and weakening. Following the October 14 Bavarian elections, the current coalition government may end, paving the way either for a CDU-led minority government or for an attempt to bring the Greens into the government—both political firsts in Germany’s post-war history.

The September 2017 Bundestag election results represented a political upheaval at the federal level. The upheaval will continue to play out at the state level as the citizens of Bavaria and Hesse go to the polls on October 14 and October 28 respectively. In Bavaria, the CSU—the partner of Chancellor Angela Merkel’s CDU—is likely facing its lowest percentage of the vote since World War II (likely between 30 and 35 percent). While this figure would be the envy of any European or German political party today, the CSU has always prided itself on having a strong majority of votes in Bavaria. In 2013, the CSU received 47.7 percent of the vote. Recent polls suggest that other parties in Bavaria will receive 16.3 percent (Greens), 13.1 percent (AfD) and 11.9 percent (SPD) of the vote. If these results hold true, the CSU would need to enter into a coalition government rarely seen in Bavaria over the last 50 years. There is also an outside chance that other parties could form a coalition government without the CSU, which would send shockwaves through Germany. But no matter the coalition, AfD will enter Bavaria’s parliament for the first time, challenging the CSU as a party that is farther right. Should this happen, AfD would be represented in 15 out of 16 German states and would be a growing political force to be reckoned with.

What explains both AfD’s success and this new German political landscape?

Perception versus Reality: The Politics of Migration. Clearly, migration is the leading and animating political dynamic in Germany as the country’s authorities—federal, regional, and municipal alike—continue to grapple with the practical and legal consequences of the 2015 influx. But it is important to note that education, health care, worker’s rights, and family policy are also part of the current German political debate.

Interestingly, a recent survey by Integration Barometer shows that most Germans have a positive perception of life in “immigration country Germany.” However, geography within Germany matters in the migration debate. This positive perception was strongest in parts of the country where people have more experience living side by side with immigrants, such as in the Western part of Germany. Germans who have less or no contact with immigrants are much more critical of migration and migrant resettlement, particularly in Eastern Germany. Still, in total, 60 percent of people who may have less contact with migrant communities responded positively to the possibility of taking in more refugees, even if Germany were the only country in the European Union to take refugees, albeit with numerical limits.

The political reality about migration in Germany is more nuanced than the perception, but the populist and anti-immigrant rhetoric of the AfD—with echoes from darker times—has worried many observers about the future state of German politics and society, underscored by recent anti-immigrant violence in Chemnitz as well as months-long bickering over migration policy between Interior Minister and CSU leader Seehofer and Chancellor Merkel.

Out with the Old, In with the New. As in other Western countries, discontent with established politicians, parties, and with the political system itself has grown and is now deeply rooted in parts of German society. For a political culture that greatly values stability, this discontent is even more disorienting, particularly as the discontent tends to focus on the past decisions made by the two largest political parties, CDU and SPD, which have governed Germany on and off for nearly a decade. AfD has capitalized on this discontent by suggesting that decisions made by these political parties were decided with little regard for the population’s needs and interests, leading to deeper anger in the population.

Across Germany, AfD appeals to between 15 and 17 percent of the population. Its support derives largely from the eastern German states, the so-called “new” Länder, as well as primarily rural areas in East and West and those areas which suffered from the decline of traditional industries.  Another non-traditional party that has gained popularity is the Greens, which is also polling around 16 percent of the vote nationally and will likely come in second in the Bavarian elections. Nationally and in Bavaria, the Greens appear to be an attractive alternative to which frustrated centrists from SPD and CDU/CSU can turn. Having lost a great deal of their specific environmental agenda to the CDU after the 2011 Fukushima nuclear accident and gone through a leadership transition, the Greens have returned as a viable political force with the hope of dramatically curtailing Germany’s fossil fuel use despite its energy-intensive, export-based economy.

Bavaria and Hesse Vote; Berlin Must Listen. The results from the Bavarian and Hesse elections will likely roil the current coalition government and will continue AfD’s political expansion across Germany. Immigration continues to be the most important factor driving AfD success, but frustration with the current state of policies and political parties is also a significant factor. The longer German political parties fail to find a confident response to migration issues and Germany’s political stagnation, the more AfD will reap electoral benefits.

Immediately following the aftershocks of the Bavarian elections, the Hesse elections results will likely reinforce the strong winds of change. The CDU is currently polling at 29 percent in Hesse, the SPD at 24 percent (which is much higher than SPD’s national average), and the Greens and the AfD are both at 14 percent (consistent with their national standing). But these numbers stand in stark contrast to five years ago when CDU took 38.3 percent, SPD 30.7 percent, Greens 11.1 percent, and LINKE (left-wing), and FDP (liberals) just over 5 percent of the vote. If the polls prove to be correct, the AfD will enter the parliament of Hesse for the first time and the current CDU-Greens coalition will need another coalition partner. 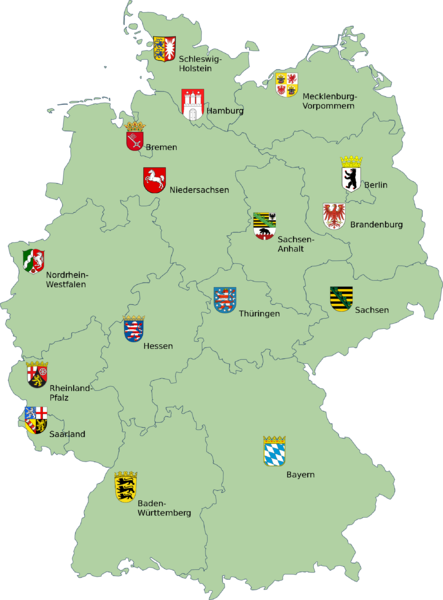 
Looking ahead to next year in the three eastern Länder of Saxony, Brandenburg, and Thuringia, current polling suggests that the AfD will do extremely well. In Saxony, AfD came in first during the 2017 federal elections with 27 percent of the vote. A poll conducted by the East German newspaper Leipziger Volkszeitung suggests that CDU will be at 28.9 percent, AfD at 23.9 percent, LINKE 18.6 percent, SPD 11.4 percent, and the Greens 6.8 percent. This would mean a loss of more than 10 percent for the CDU in four years (39.4 percent in the 2014 elections).  Under this scenario, no two-party coalition would be possible for the CDU in Saxony, including a renewal of the current CDU-SPD coalition. As far as polls are available for Brandenburg and Thuringia, numbers show a similarly strong preference for the AfD.

The election results in October will show a body politic that still supports the largest German political parties despite unhappiness with their handling of the 2015 migration crisis. But the results will also show a polity that is experimenting with populist and xenophobic forces (in AfD) and revisiting an earlier anti-establishment political experiment that has substantially moderated its views since its 1980s inception—the Green party. The coming elections present no decisive policy message or direction; the political confusion and fragmentation will make for difficult coalition math, a long and tedious coalition formation process, and an unending erosion of the political center. German mainstream political parties need to embrace new ways of responding to the public’s needs and interests rather than clinging to what has been done in the past. Reform is urgently needed in both how they implement policies and how they organize themselves. Leaders and political parties must clearly define their agenda and offer genuine political choice while tackling difficult challenges—such as demographic challenges and a rapidly-transforming economy. Without these steps, the overarching German need for stability will have given way to a dangerous and inherently unstable political stagnation.

Heather A. Conley is senior vice president for Europe, Eurasia, and the Arctic and director of the Europe Program at the Center for Strategic and International Studies (CSIS) in Washington, D.C.