Germany’s hydrogen strategy is focused on achieving climate goals. At the same time, the country is aware of the economic chances of a growing hydrogen market and seeks to become a leading provider of green hydrogen technologies. Its approach is guided by the National Hydrogen Strategy, released in June 2020. Funding is provided in large part, but not exclusively, by the pandemic-related Package for the Future. It makes available €7 billion ($8.1 billion) for speeding up the market rollout of hydrogen technology in Germany and another €2 billion ($2.3 billion) for fostering international partnerships. Several of Germany’s 16 state governments also have defined hydrogen strategies or roadmaps (e.g., Baden-Württemberg, Bavaria, five north German coastal states together, North Rhine-Westphalia).

Germany’s long-term climate goal is to achieve carbon neutrality in line with the targets agreed to under the Paris Agreement. The country had committed itself, together with the other European member states, to achieving greenhouse gas (GHG) neutrality by 2050. When in June 2021 the German federal government further strengthened the national climate goal to achieving GHG neutrality already by 2045, the pressure to decarbonize the national economy grew further. After the country’s decision to phase out coal-fired power, hydrogen is now considered to play a key role in reaching emissions-reduction targets, particularly regarding process-related GHG emissions from the country’s large industrial sector, emissions of parts of the transportation sector and, in the long term, potentially also emissions from the heating sector.

The German government has supported hydrogen research since the 1980s and Germany now has an advanced hydrogen research landscape. It seeks to become a global leader and exporter of (green) hydrogen technology. Already today, the country has a global market share of 20 percent in building electrolysers, led by Thyssenkrupp subsidiary Uhde.

According to the National Hydrogen Strategy, a first step to speed up the rollout of hydrogen technology is establishing a domestic market for the production and use of hydrogen. The National Hydrogen Strategy states, “Germany plans to establish up to 5 GW [gigawatts] of generation capacity including the offshore and onshore energy generation facilities needed for this.” An additional 5 GW are to be added by no later than 2040. A 5 GW production capacity corresponds to about 14 terawatt-hours (TWh) and thus only covers about a seventh of the projected German hydrogen demand by 2030 (90 to 110 TWh). The projected gap between production and demand underlines Germany’s plan to import hydrogen.

To secure the country’s future energy supply, but also to work together on hydrogen technologies and to assist other countries in their efforts to scale up hydrogen production for their own energy transitions, international cooperation and partnerships on hydrogen are being built and intensified. The National Hydrogen Strategy states that “the energy partnerships will also be contributing to the decarbonization and economic development of the countries exporting the hydrogen.” According to the National Hydrogen Strategy, Germany focuses on joint projects in the area of the North Sea, in southern Europe, in the context of the federal government’s existing energy partnerships, and in cooperation with the partner countries in German development cooperation. Since the release of the National Hydrogen Strategy in June 2020, Germany has already signed agreements on hydrogen (a Memorandum of Understanding, letter of intent, or new energy partnership) with several countries, including Saudi Arabia, Australia, Chile, Namibia, Canada, Ukraine, and Morocco.

Although the National Hydrogen Strategy clearly favors green hydrogen, the role of blue hydrogen as a possible bridging technology remains unclear at present. The strategy focuses on green hydrogen, but it also says that other low-carbon hydrogen (e.g., blue or turquoise) will “play a role” in a global and European hydrogen market and hence in Germany. In July 2021, Germany's hydrogen council—the government-appointed advisory body—called for an urgent decision on the status of blue hydrogen. A majority in the council supports blue hydrogen as a bridging technology that would help meet near-term demand for low-carbon hydrogen and allow for a transition in existing energy trading partnerships. Previously, a dispute over blue hydrogen between the Federal Ministry for Economic Affairs and Energy and the Federal Ministry for the Environment, Nature Conservation and Nuclear Safety was already responsible for a delay of several months in releasing the National Hydrogen Strategy. Blue hydrogen is produced from natural gas using a carbon capture and storage (CCS) system. Germany wanted to promote demonstration projects on CCS already about 10 years ago, guided by the CCS law of 2012, but the projects did not get started, mainly due to public resistance to developing carbon storage sites.

The German hydrogen strategy must be viewed in the context of the European hydrogen strategy. The German government used its EU Council presidency from July through December 2020 to promote and develop the EU hydrogen strategy for common energy policies. The EU hydrogen strategy was published the same day as the EU energy system integration strategy, which highlights the key role the European Union sees for hydrogen in future coordinated planning and operation of the whole EU energy system. In December 2020, 22 EU countries and Norway signed a manifesto paving the way for a cleaner hydrogen value chain and committing to launch important projects of common European interest (IPCEIs) in the hydrogen sector. This framework aims to encourage EU member states to support projects that make a clear contribution to the EU strategic objectives, as IPCEI status allows projects to be subsidized by member states. The German federal government and states plan to fund 62 IPCEIs in Germany with over €8 billion ($9.7 billion).

The National Hydrogen Strategy contains an action plan of 38 concrete measures for starting the market ramp-up until 2023. The measures aim at attracting private investment in hydrogen generation, transport, and use. The next phase will start in 2024 and is about stabilizing the emerging domestic market and molding the European and international dimension of hydrogen.

In September 2021, the German government released a report on the progress of the implementation of the 38 measures. Exemplary key measures and the progress made on them according to the newly released report are:


Germany is working hard on the implementation of the National Hydrogen Strategy and is spending billions. According to the International Energy Agency’s Global Hydrogen Review 2021 released in October 2021, countries that have adopted hydrogen strategies have committed at least $37 billion. Hence, Germany, by funding its hydrogen strategy with significantly over $10 billion (already committing $10.4 billion under the Package for the Future alone), provides probably more than a quarter of global state aid under a national hydrogen strategy.

The German National Hydrogen Strategy does not explicitly focus on developing regional centers of hydrogen production or use. Only the state-level Hydrogen Strategy for North Germany refers to hubs, in which “the generation, temporary storage, distribution and use of hydrogen are geographically concentrated” and which “serve as starting points for establishing a hydrogen economy in North Germany.” 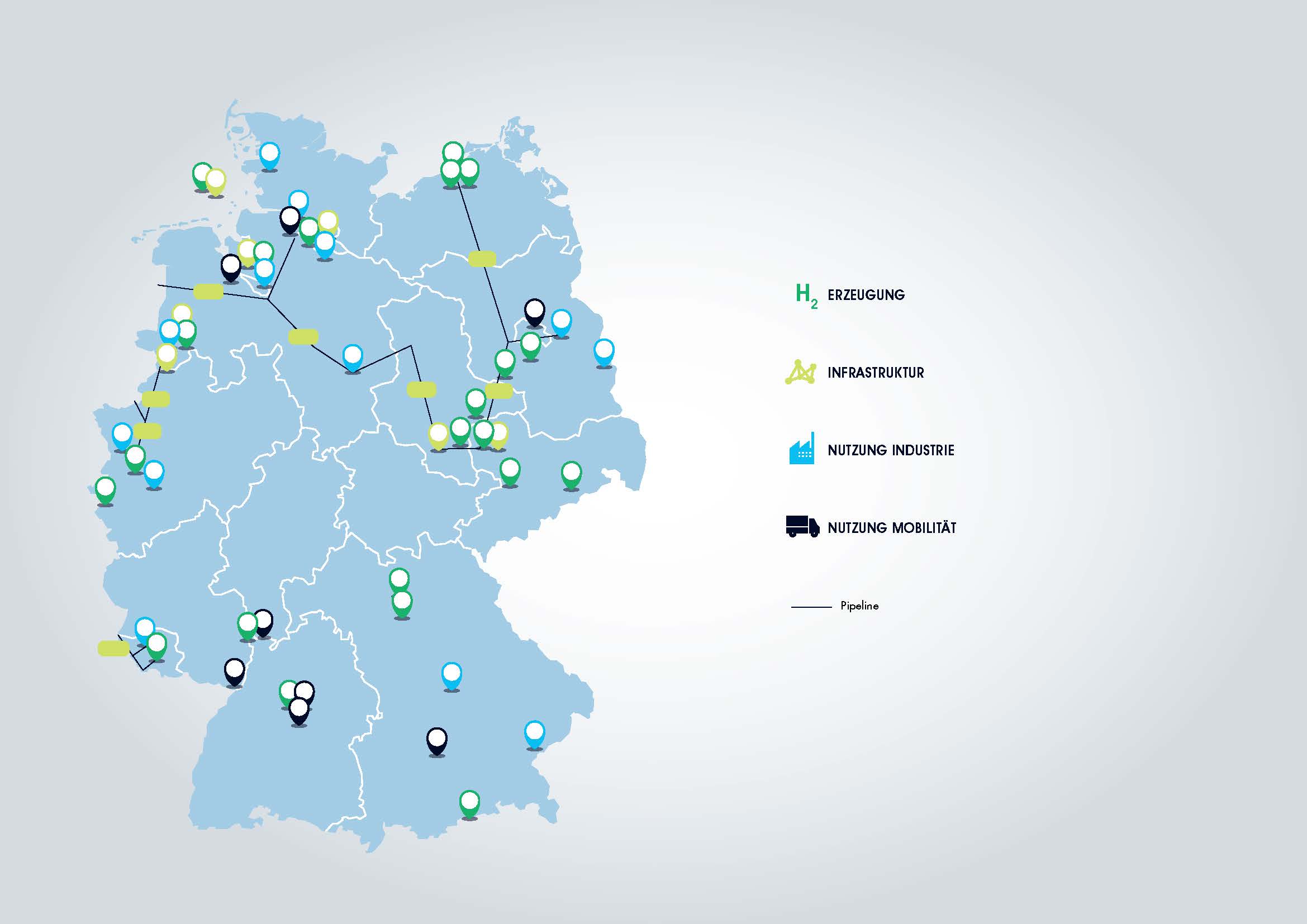 Note: Green: production; yellow: infrastructure; blue: use in industry; black: use in transportation.

Nevertheless, it is probably not a coincidence that the 62 hydrogen IPCEI projects to some extent cluster on the coast of northern Germany and in the German coal regions. The coastal states will play a key role when it comes to the seaborne import of hydrogen (e.g., via the port of Hamburg) and they have existing or potential wind energy capacity that can be used to produce green hydrogen. The coal regions on the other hand are affected by Germany’s coal exit and need new industry sites. 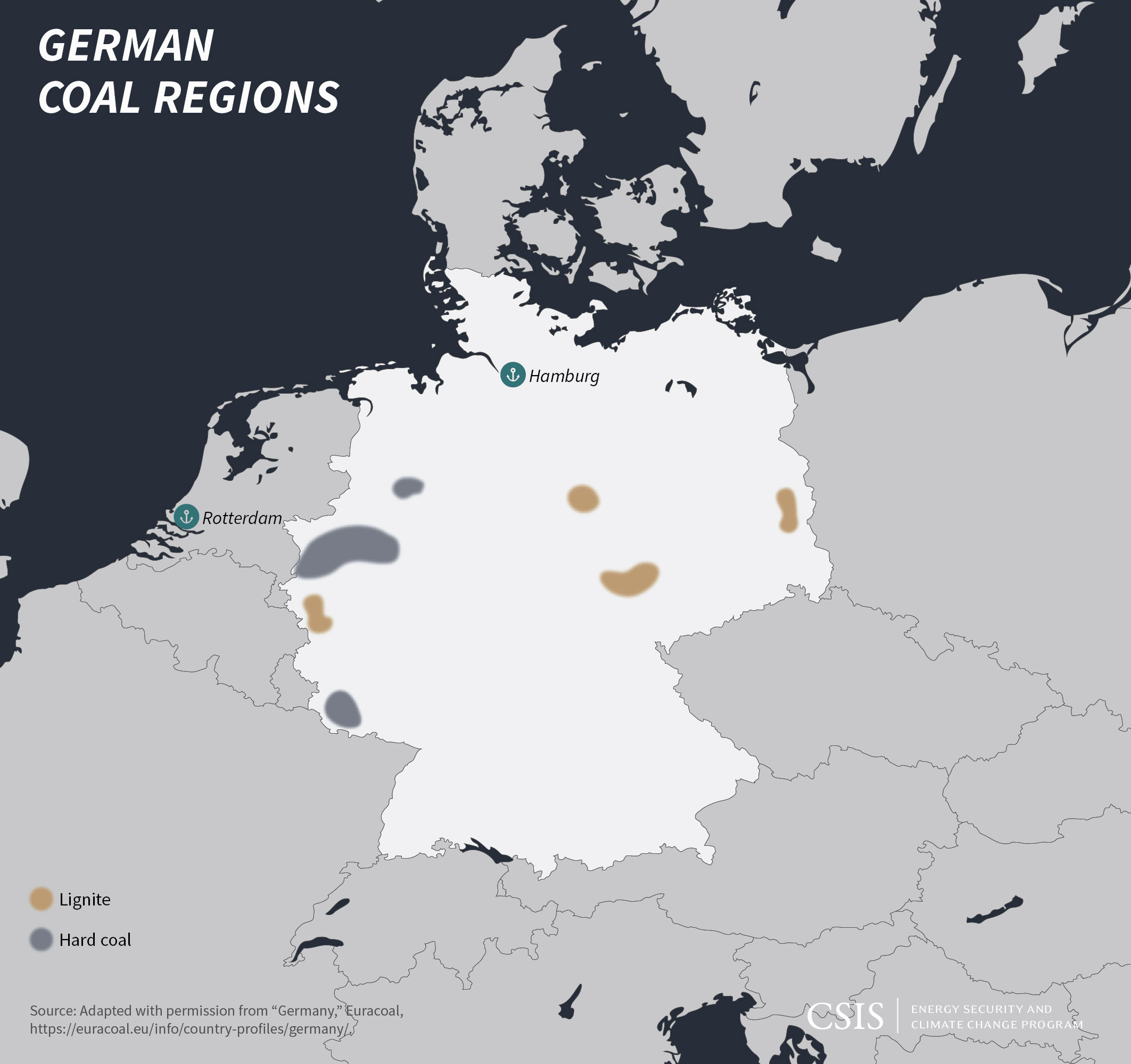 Europe’s biggest port, the port of Rotterdam in the Netherlands, is also preparing for future hydrogen imports. From Rotterdam, Germany will likely import hydrogen via pipeline to the state of North Rhine-Westphalia in western Germany, which will probably become a major hydrogen demand center. North Rhine-Westphalia is home to one of Europe’s largest industrial centers and Germany’s biggest coal region.

Already the structural-support law that accompanied the coal exit law of 2020 contained—among many other measures—hydrogen-related support for North Rhine-Westphalia: the establishment of a research center/Helmholtz cluster for sustainable and infrastructure-compatible hydrogen economy (HC-H2) will receive around €860 million in federal funding over 17 years.

There are further examples of Germany funding certain regions, but they are rather spread over the whole country. For instance, the Federal Ministry of Transport and Digital Infrastructure provides funding under the National Innovation Programme for Hydrogen and Fuel Cell Technology (1.4 billion euros from 2016 to 2026) for a growing number of so-called HyLand regions that focus on green hydrogen to decarbonize transportation.

This commentary is made possible by support from the Hewlett Foundation