Getting the Pandemic Completely Wrong

I was wrong, perhaps profoundly so. In the earliest days of the Covid-19 pandemic, few Middle Eastern governments were showing any capacity to halt the spread of the disease, and they seemed ill prepared to protect their citizens from the economic ravages of its impacts. With so many in poverty and so many lacking formal employment, populations already were living on a knife’s edge. Covid-19 would disrupt economies, slash incomes, and demonstrate governmental ineptitude. It seemed poised to throw the region into chaos.

But almost two years later, the pandemic has not thrown the region into chaos, at least not yet. In fact, the pandemic’s political fallout has been relatively modest everywhere around the world. For communities committed to understanding political economy, global security, and the drivers of political change, the pandemic’s modest political punch in the Middle East requires explanation.

If there is a poster child for a government’s ineffective Covid-19 response in the Middle East, or almost anywhere in the world, it is Iran. Iran was hit early and hard by the pandemic, and Iranian infection rates were for many months among the highest in the world. Early on, Iranian officials downplayed the seriousness of the disease, and already-low public trust in government hobbled whatever response the government sought to muster. In the last two years, the country has had five waves of deaths, each one larger than the last. To this day, vaccine hesitancy is high, not least because many Iranians have so little interest in domestically produced vaccines.

Iran’s economy was already reeling before Covid-19 hit, and its GDP was falling. The pandemic shrank global oil demand and dropped global energy prices. Even though Iran’s energy exports are hobbled by sanctions, the country still sells hundreds of thousands of barrels of oil per day on global markets; lower prices depressed the economy still further. Inflation began running at almost 50 percent.

Yet when Iran held elections last summer, the population did not rush into the streets to demand an end to the Covid-induced madness. Summer protests were not over the pandemic, but instead over water and electricity shortages. The record-low election turnout ushered in a government that is avowedly skeptical of rapprochement with Western powers and a decrease in sanctions pressure. The Iranian public has remained disengaged as negotiations drag on, and sanctions persist. While the pandemic sharply deepened Iranians’ distress, it does not appear to have produced a political response.

At the other end of the spectrum in the Middle East is Israel. The country was aggressive in protecting the health of Israelis, and then-prime minister Binyamin Netanyahu made an innovative deal with Pfizer-BioNTech to secure early vaccines for Israelis in return for clinical data. As a consequence, Israel was the first country in the world to vaccinate a majority of its population (and later, one of the first to mandate boosters), providing the public with early opportunities for a return to normalcy in the spring of 2021.

Here, too, the pandemic seemed to have little political impact. Netanyahu lost reelection in March 2021, after three victories in closely decided elections in the two years prior. While Netanyahu had appeared vulnerable throughout, his vulnerabilities stayed steady, and he was able to eke out a win repeatedly. Yet when the biggest news in the country was Netanyahu securing vaccines and pointing a way out of the pandemic—or so Israelis thought—it seemed to do him no good.

Where politics are less open, some governments appear to have been able to turn the pandemic to their advantage. The wealthier Gulf monarchies have been proactive, securing vaccines and mandating their administration and restricting movement through smartphone apps that reveal both vaccine status and user location. Meanwhile, they have pumped stimulus payments into their economies.

Tunisia represents a more complicated case. There, the pandemic deepened economic distress over the summer of 2021. It contributed to rising criticisms of parliament, which critics charged was preoccupied, self-interested, and unable to meet the country’s challenges. Tunisia’s president, Kais Saied, seized on popular discontent to dismiss parliament and argue for a new constitution. So far, he appears to enjoy widespread popular support, presiding over a majority that came to distrust democratic rule.

Less complicated cases are in countries that have descended into conflict. Syria, Yemen, and Libya are among the most uncertain in the region, with central governments that lack control over large swaths of their territory. In these countries, access to any kind of healthcare can be a chancy endeavor, and combatants have used access to medicine as a political instrument. Even so, evidence suggests that the health consequences of violence are greater than those of the pandemic, and the pandemic itself doesn’t seem to have shifted the nature of these conflicts.

In searching for the reasons for the relative impotence of the pandemic as a political force, part of the credit must go to central bankers who were able to keep economies afloat amid diminishing economic activity. A certain sense of fatalism among Middle Eastern publics, especially since so many feel that 2011’s efforts at political change backfired, surely plays a role as well. So does the often-lackluster performance of Western governments, which often have been unable to stanch their own waves of infections.

But at the same time, it is becoming clearer that identity—be it sectarian, religious, or national—can be constantly reinvented, and people remain receptive to calls to rally in the face of threats. Governments are being more outspoken about their enemies, and citizens are wary of being seen in opposition. Security services have also grown more sophisticated and more skilled.

The Middle East seemed to come together a decade ago on utopian visions, but governments appear more skillful at holding their countries together now on fears of what might be. In this, they appear to be bringing their publics along. That may serve governmental interests in the near term, but it is hard to see it serving public interests in the longer term.

Jon B. Alterman is senior vice president, holds the Zbigniew Brzezinski Chair in Global Security and Geostrategy, and is director of the Middle East Program at the Center for Strategic and International Studies in Washington, D.C. 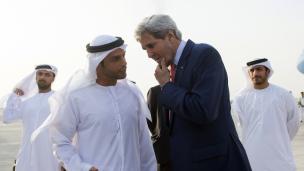 China Headaches for Iran Deal
By Jon B. Alterman
September 22, 2021
View all content by this expert