In an odd way, the Trump administration may be making progress in its approach to trade. It began with ideas that identified wrong problems and offered wrong solutions, most notably the president’s fixation on bilateral deficits as the single indicator of a trade relationship. Lately, however, it has moved on to coming up with right problems and wrong solutions, the most obvious case being China, where there is widespread agreement that the administration’s diagnosis of what the Chinese are doing is correct and important. Unfortunately, the proposed solution—at this point, mostly tariffs—won’t solve the problem and will cause a good bit of collateral damage. However, as the experts tell us, recognizing the problem is the first step toward a cure, so we appear to be making progress.

Meanwhile, another right problem–wrong solution issue appeared on trade wonks’ radar screens some time ago—in the last administration, actually—and is now beginning to attract the attention of a broader audience as we slowly waddle toward disaster. That issue concerns the World Trade Organization (WTO) Appellate Body.

For those of you who don’t follow these things closely, the Uruguay Round, which created the WTO, included a revised and strengthened dispute settlement process. The strengthening was to prevent dispute settlement panel decisions from being blocked by the losing party, which had been the practice under the General Agreement on Tariffs and Trade (GATT). In the WTO, a ruling could only be blocked by consensus—all parties would have to agree. The revision was meant to institutionalize and formalize the process by which complaints were considered. The new structure contained the traditional approach of a panel of experts—none from the countries involved in the dispute—to examine the allegations, hear from both sides, and make a decision. The new feature was an Appellate Body, consisting of seven experts serving fixed four-year terms (with a second term permitted), that would, on appeal by one of the parties to a case, review the initial panel’s decision and either affirm or modify it, in whole or in part.

The problem, in a nutshell, is Appellate Body overreach. The very clear understanding at the time of its creation was that it would rigorously confine itself to adjudicating the obligations laid out in GATT and WTO agreements. Ambassador Robert Lighthizer has expressed this in terms of interpreting a contract, where the parties have taken on defined obligations, and no more. Actual practice has shown otherwise, as the Appellate Body has not hesitated to interpret WTO rules broadly and effectively make new ones by filling in gaps in the existing ones. Most of the cases that involve the United States are related to enforcement of our antidumping and countervailing duty laws, with other countries arguing that either our law or, more often, our interpretation of our law, conflicts with our WTO obligations. Many of those cases involve the so-called zeroing issue, where the United States made a good faith effort to address the WTO’s concerns without much effect. Those debates get into the weeds really quickly, and there is no room here to go through them, for which most readers will be grateful. Suffice it to say that most U.S. practitioners, along with a good number of foreign practitioners, would agree that the Appellate Body has exceeded its mandate and is creating new rules that go beyond the limits of what was agreed to in the Uruguay Round.

The U.S. “remedy” for this problem has been to starve the Appellate Body to death by refusing to permit new appointments to it. As a result, the seven are currently four and will be down to three in September, which will make it between difficult and impossible for them to do their work at a time when their caseload is growing. It is hard to imagine a less productive tactic, both for the viability of the organization and for the United States, which has been a frequent user of the appeals process. Worse, by refusing to suggest a path to resolution, the U.S. strategy appears to be to destroy the village in order to save it. That did not work out very well for us the last time we tried it, and this time will not be different. Trying to start over in a divided organization that operates by consensus is not going to produce a better alternative. Instead we will weaken the institution and leave ourselves with nowhere to go when we lose a case. Once again, right problem, wrong solution. I live for the day when I can write about both right problems and right solutions coming from the administration, but sadly, we are not there yet. 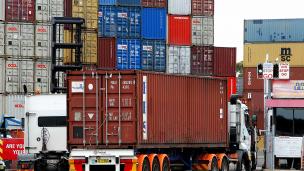