Happy New Year and welcome to the January 2018 newsletter from the Global Health Policy Center (GHPC) at the Center for Strategic and International Studies (CSIS)! We invite you to catch up on our latest content. 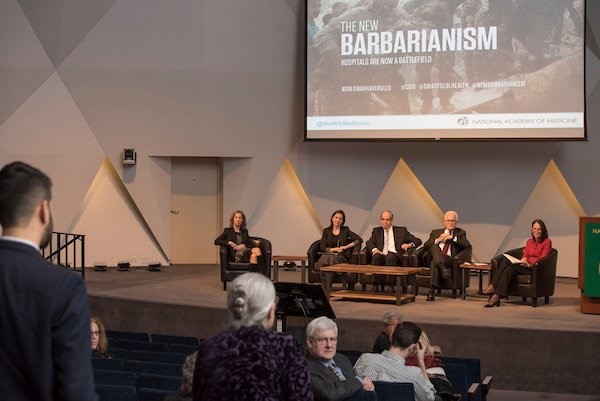 The documentary was screened on December 7 at the London School of Hygiene and Tropical Medicine (LSHTM). The screening was followed by a panel discussion featuring Peter Piot, Director of LSHTM; Laura Hammond, University of London School of Oriental and African Studies; Louis Lillywhite, Senior Consulting Fellow at Chatham House; Justin Kenny of Small Footprint Films and Co-Director of The New Barbarianism; and myself.
The documentary was also screened on December 18 at the National Academy of Medicine in Washington, DC (pictured above). The screening was followed by a panel discussion featuring Alexandra Boivin, Head of Regional Delegation for U.S. and Canada, International Red Cross; Rebecca Everly, Director, Committee on Human Rights, National Academies of Sciences, Engineering, and Medicine; Leonard S. Rubenstein, Center for Public Health and Human Rights, Johns Hopkins Bloomberg School of Public Health; and myself. The panel was moderated by Peggy Hamburg, Foreign Secretary, National Academy of Medicine.
PBS NewsHour featured the documentary in a segment that aired on December 29. In the broadcast, PBS NewsHour anchor Hari Sreenivasan discusses the film, the contribution made by Justin Kenny, co-director and writer (and award-winning, former NewsHour foreign editor), and the wave of violence against the health sector with Dr. Ahmad Tarakji, President of the Syrian American Medical Society, and myself. You can find the full broadcast and transcript here.
If you’re interested in hosting a viewing, please contact Chris Millard (cmillard@csis.org).

As a follow-up to our documentary, The New Barbarianism, the CSIS Global Health Policy Center is exploring what mix of CSIS activities might best address the central question raised in the film: What can be done to prevent violence against health providers and humanitarians? We imagine putting a focus on actions by the U.S. military and counterparts, the U.S. Congress, and international diplomats and other experts keen to update and revitalize respect of international legal norms. To help us answer this question, and with the help of Program Manager and Research Associate Lillian Dattilo, I organized three consultations with external partners who can provide guidance.

In the coming weeks, we will decide on a course of action for 2018. Stay tuned!

We are pleased to welcome three new hires:


As always, I welcome your questions and comments.