The U.S. National Intelligence Council finds that the countries experiencing the physical effects of climate change will “face increasing risks of instability and need for humanitarian assistance.” The U.S. Department of Defense notes that climate change–related impacts can heighten the conditions under which political crises, civil unrest, mass migration, and state failure occur. The U.S. Global Fragility Act of 2019, the Biden administration’s recent Report on the Impact of Climate Change on Migration, and countless other U.S. government documents reaffirm these linkages between state fragility, violent conflict, and climate change. UN secretary-general António Guterres recently echoed these concerns on the world stage, stating that “climate change is not the source of all ills, but it has a multiplier effect and is an aggravating factor for instability, conflict and terrorism.”

As climate change worsens, an increasing number of technological tools are being developed or repurposed to mitigate the negative impacts of climate change and, in doing so, lower the risk of climate-induced conflict. These should be seen not as silver bullets but rather as important tools to be deliberately and carefully deployed.

[Technological tools] should be seen not as silver bullets but rather as important tools to be deliberately and carefully deployed.

What Is Known about Climate and Conflict 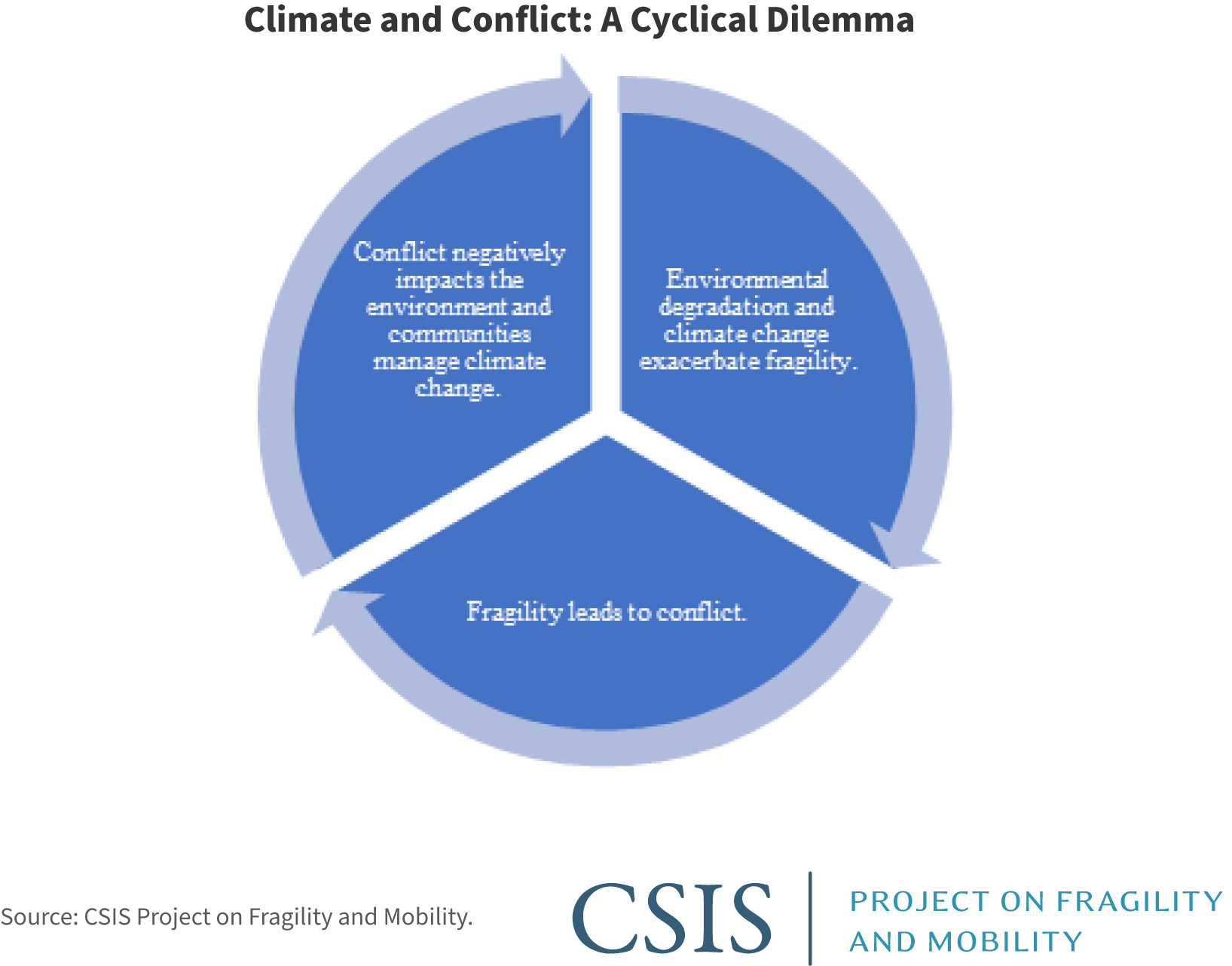 For example, in northern Iraq, Chemonics International has been working with Yazidi communities in Sinjar recovering from the Islamic State–inflicted genocide in 2013–2014. The heavily agricultural region is now suffering from conflict-related neglect and sporadic rainfall and unseasonably high temperatures. The UN Food and Agriculture Organization predicts that by the end of the 2021 crop season, wheat production will fall by 70 percent. Humanitarian and development actors have noted the devastating impacts drought has had on farmers in the region and on displaced people unable to return to unproductive land.

Meanwhile, Yemen has been one of the most fragile countries in the world over the last decade. The prolonged civil war and environmental crisis have created such extreme conditions that in 2021, the United Nations named it the world’s worst humanitarian crisis for the fourth year in a row. Countless people have been killed or injured, and 20 million people—roughly two-thirds of the entire population—are suffering from hunger and malnutrition. Before the civil war, Yemen had already experienced chronic water troubles due to its semi-arid landscape and rapid population growth. Climate change and the ongoing conflict have further impacted the freshwater infrastructure in the country, making Yemen one of the most water-scarce countries in the world, stuck in its own cycle of multifaceted and mutually reinforcing fragility.

Armed actors have weaponized climate change–related instability to achieve operational, strategic, and political gains. Operationally, climate change can be a source of recruitment, supplies, and capital. Environmental degradation causes individuals to lose their sources of livelihood; some of them will find it necessary to join armed groups out of desperation. If these armed actors gain access to depleting resources, they have valuable supplies that contribute to their operations or finances. Climatic events also generate vulnerabilities that armed groups can exploit to make tactical advances; disabling, destroying, or seizing environment-related infrastructure can erode the capabilities of adversaries. Finally, armed groups can manipulate environmental resources for political gain; governing the access or use of valuable resources boosts their legitimacy and coercive power.

The crisis in Yemen is a prime example of this weaponization. Limited access to water has created incentives for armed groups and political actors to vie for control over water sources and distribution. The country’s third-largest city of Taiz, for example, experienced chronic water shortages before the war broke out. After Houthi rebels surrounded the government-controlled city in 2015, they established checkpoints at its two main entrances. The Houthis consolidated power by restricting water access and used this coercive weaponization against civilians in the battle over control of the city.

Similarly, violent extremist groups are exploiting tensions and vulnerabilities within Lake Chad Basin communities. Lake Chad supports the agricultural livelihoods of 30 million people in Cameroon, Chad, Niger, and Nigeria; however, it has lost 90 percent of its volume since the 1960s. Rapid resource depletion, environmental degradation, and climatic shocks have compromised individuals already experiencing chronic underdevelopment. Climate change and population growth have triggered increased competition over resources, food insecurity, organized crime, and irregular migration. Violent extremist groups in the region, including Boko Haram and Islamic State West Africa Province, are exploiting these conditions to expand their operations which, in turn, fuels the complex security and humanitarian crisis in the region.

As the climate crisis evolves, an increased number of technological tools are being developed or adapted for environmental conservation. From satellite imagery to digital citizen reporting and storytelling, these tools play a crucial role in preservation and climate adaptation. They are also increasingly relevant to peacebuilding efforts. When appropriately deployed and utilized, technology can help break the climate-conflict cycle.

Satellite imagery, for example, can be used for a wide range of nature conservation efforts, including tracking seasonal vegetation changes and observing surface water frequency over time. As experience from efforts like SERVIR and the UK aid-funded Cross-Border Conflict Evidence, Policy and Trends (XCEPT) project demonstrate, satellite imagery coupled with on-the-ground information allows for a better understanding of complex challenges.

The XCEPT research project brings together satellite mapping specialists Satellite Applications Catapult and local peacebuilding experts Conciliation Resources. These organizations are collaborating to conduct cross-border research on peaceful pastoralism—the practice of livestock herding between grazing sites—in Nigeria and neighboring countries. The team blends highly localized field research with satellite and geographic information system mapping, data, and analysis. Together, these methods monitor changes in patterns of pastoralist movement because of natural and manmade factors. This research seeks to reveal why pastoral movements change and how to prevent and resolve violent conflicts that are linked to changing migration patterns.

The end goal of satellite imagery and similar data collection technologies is not the imagery itself but rather their on-the-ground application. The localization of data is important to advancing nature conservation tools and, in the case of XCEPT, ensuring their conflict-aware utilization. This conflict awareness is important, especially since there are risks in using satellite imagery in conflict zones—such as concerns over intelligence gathering—that XCEPT and similar efforts must navigate. Nevertheless, geospatial data will become increasingly useful in peacebuilding as satellite imagery becomes more available and analysis of that imagery more accessible.

Accessible and useful information does not always have to come from above. In 2017 and 2018, the Kenyan government evicted—at times violently—Indigenous groups from the country’s forested areas because their presence supposedly led to deforestation. An NGO, This is My Backyard (TIMBY), entered the communities and realized that information access and communication were key challenges. Within a month of distributing digital documentation tools to the Indigenous people affected, evictions and violence largely ceased. Attention shifted instead to a community dialogue on preserving forested areas and documenting how best to do so. TIMBY’s documentation technology was first a mechanism for accountability for violent eviction, and second, a form of oversight to deter government abuses. It de-escalated tensions between local communities and the government and transformed their relationship into one where they collaborated on a shared mission.

This kind of localized information can also allow effective and efficient allocation of resources. For example, the Humanitarian OpenStreetMap Team (HOT) links the open-source data project OpenStreetMap with humanitarian actors, such as the Red Cross and UN Office for the Coordination of Humanitarian Affairs, and local communities. A notable feature of HOT is that it enables all users to contribute to and use the open-source apps and tools on OpenStreetMap. For its Missing Maps project, individuals in inaccessible, remote, and disaster-affected areas can literally put themselves on the map by tracing satellite imagery to OpenStreetMap and adding details about their community, such as neighborhoods, street names, and evacuation centers. This information allows humanitarian organizations to effectively reach and respond to crises and support risk reduction and disaster response planning.

Like most tools, technology itself is a neutral entity that can be wielded either for positive or malicious ends. Peacebuilding professionals certainly have new tools at their disposal, but there remain uncertainties and risks regarding the collection, access, and use of data. For example, actors face fewer barriers in accessing and exploiting accurate and granular data for nefarious ends. Satellite imagery used to track shifting pastoralist routes for humanitarian and development actors could also be accessed by hostile groups hoping to gain an advantage in a conflict. Breaking the cycle will be easier with technology, but doing so is not without its own risks.

As digitization expands and access to data becomes ubiquitous, there is an opportunity for technology to support peacebuilding even as climate change continues to evolve and stress fragile environments. Seizing this opportunity requires deliberate effort to integrate advancedtechnologies with conflict analysis and environmental science to inform decisionmaking. Research, expertise, and lessons from these fields must converge to face increasingly complex challenges. Here are four recommendations that should be at the forefront of this convergence.

2. Strengthen partnerships. Better understanding and partnerships between the private sector—particularly those using technology to gather and utilize data—and a public sector responsible for the protection and well-being of citizens can facilitate better, more integrated responses to climate change–related conflicts. Big data and frontier technologies are being developed across the private sector to collect, analyze, and share information. Governments should support, partner with, and learn from companies pushing the envelope on data collection and application, as the U.S. government is doing with SERVIR. Creating platforms within and between relevant U.S. agencies is essential for bridging knowledge gaps, integrating and coordinating efforts, and creating evidence-informed policies and programs.

3. Conduct research and set standards. Though initial indications show that technological tools can be useful in breaking the climate-conflict cycle, more research is needed. While there is extant research analyzing the role of technology in, for example, social mobilization, the use of technology in mitigating conflicts with an environmental element is largely understudied. A stronger evidence base for when and how technology can be leveraged for community resilience, disaster risk reduction, and sustainable development is needed, paying special attention to potential negative consequences. The relationship between technology and peacebuilding should not be assumed to be uniformly positive. These findings, in turn, should shape climate and conflict-related policies and programming, including as part of the efforts to implement the Global Fragility Act.

Research findings should also be used to strengthen international standards around the utilization of climate-related technologies in peacebuilding. A good place to start is the Locus Charter. Launched in 2021, the charter was developed with governments, organizations, and practitioners and established standards on the ethical and responsible use of data, specifically containing common international principles to support ethical practices when using geolocation data. The principles in the Locus Charter are widely applicable to other types of data usage and are a useful template for future legislation and industry standards.

4. Use technology for good while limiting harm. As peacebuilders integrate technology into their activities, they must maintain a conflict-sensitive approach. This entails recognizing implicit power dynamics and ensuring that data is accessible and accountable to local communities. It means ensuring that bad actors do not co-opt technological tools to gain an advantage in conflict settings. And it requires substantive local leadership at every step.

This commentary is made possible by the generous support of Chemonics International, Inc.

Intern, Project on Fragility and Mobility