The Covid-19 outbreak is wreaking economic havoc across the world, and the Gulf Cooperation Council (GCC) states are especially vulnerable. Oil revenues for the Gulf states will plummet for at least the first half of 2020. Both fiscal break-even oil prices (the price required to balance the budget) and external break-evens (the price required to keep the current account at zero) show large imbalances this year.

The GCC states are generally in good shape relative to most major oil exporters and have more options at their disposal. Saudi Arabia, the United Arab Emirates (UAE), Kuwait, and Qatar all have ample room to draw on savings and to borrow. Oman and Bahrain are in weaker positions but still have access to capital markets. Bahrain can probably count on aid as well, although it has become increasingly dependent on Saudi Arabia. The GCC countries hope the current pain will be short-lived. If lockdowns subside by the second half of the year, economic activity resumes, and oil prices rebound, the damage may not be too severe. Indeed, as low-cost producers with spare capacity, Saudi Arabia, the UAE, and Kuwait would benefit more quickly than others if the market turns. 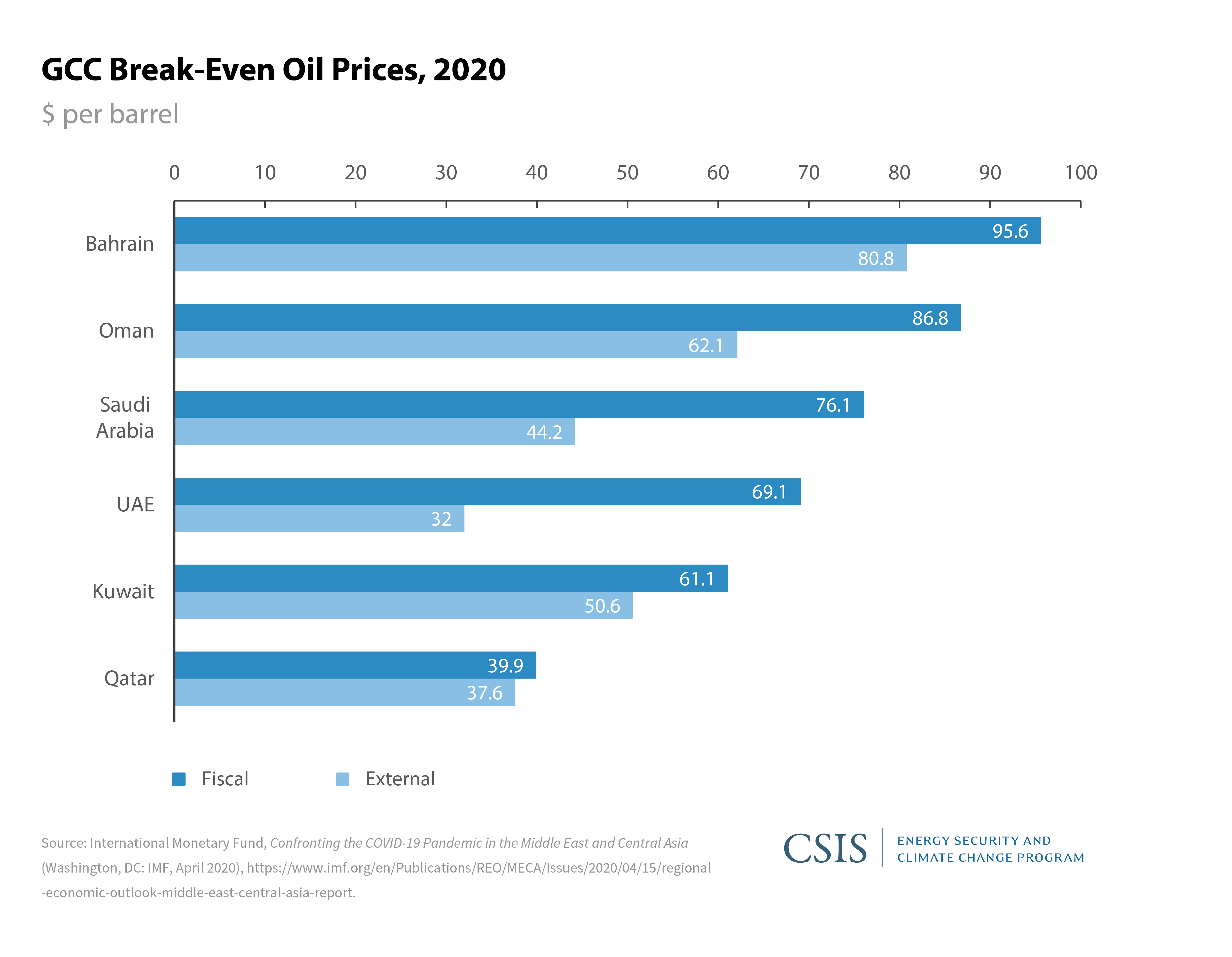 But this is an unusually extreme downturn, and there is little visibility on the ultimate shape of the recovery. Industrial activity and energy demand are picking up in China and some other Asian economies, where road transportation has increased moderately as restrictions have eased. Still, it seems unlikely that oil demand will recover to anywhere near pre-Covid-19 levels in Asia for some time, let alone Europe or North America.

Aside from the oil price impact, Covid-19 is damaging critical non-oil industries in the GCC states including tourism, real estate, construction, transport, and logistics. Stimulus plans announced to date will provide liquidity for the banking sector, but risk-averse banks may not lend to smaller enterprises. Delays in collecting taxes and fees will help local industries but reduce government revenues. In light of these pressures, capital outflows from the Gulf are accelerating, and there is even (probably unfounded) speculation that GCC currency pegs will come under pressure.

The prospect of a “lost decade” of lower oil prices is dredging up unpleasant memories. By the early-to-mid 1990s, the cumulative damage of low oil prices beginning in 1986 created dire economic conditions in the Gulf, and in some cases, led to protests and political turbulence. The extended oil bust forced ruling families to recalibrate their economic model and search out new sources of growth and investment capital. Those lean years are often forgotten due to the prosperity that followed in the 2000s boom, but they should not be ignored.

In some ways, the challenges today are greater. Job creation for youth in the GCC will be difficult over the next decade, and the underlying causes for the Arab revolts have not subsided. A newer generation of leaders in multiple GCC states also may not be as insulated from criticism as their forefathers.

Saudi Arabia: Going to the Well

The GCC states will rely on budget cuts, borrowing, and reserve liquidation to cope with the Covid-19 crisis in the short term. These are textbook maneuvers for oil producers facing a sharp revenue decline, but they cannot be sustained indefinitely. Saudi Arabia’s response illustrates the risks ahead.

Saudi Arabia’s 2020 budget anticipated a deficit of 187 billion riyals ($50 billion), equivalent to 6.4 percent of GDP, but now that deficit could more than double. In the first quarter, oil revenues dropped by 24 percent over the previous year, and non-oil revenues fell by 17 percent—but the next quarter will be much worse. Riyadh has cut back on non-essential parts of the budget to reallocate spending toward health and stimulus programs. It is likely to delay Vision-2030-aligned mega projects including Neom and a Red Sea tourism and development project. But more than 80 percent of the budget is allocated to current spending as opposed to capex, largely on public sector salaries and social programs. Deeper cuts would carry a political cost. 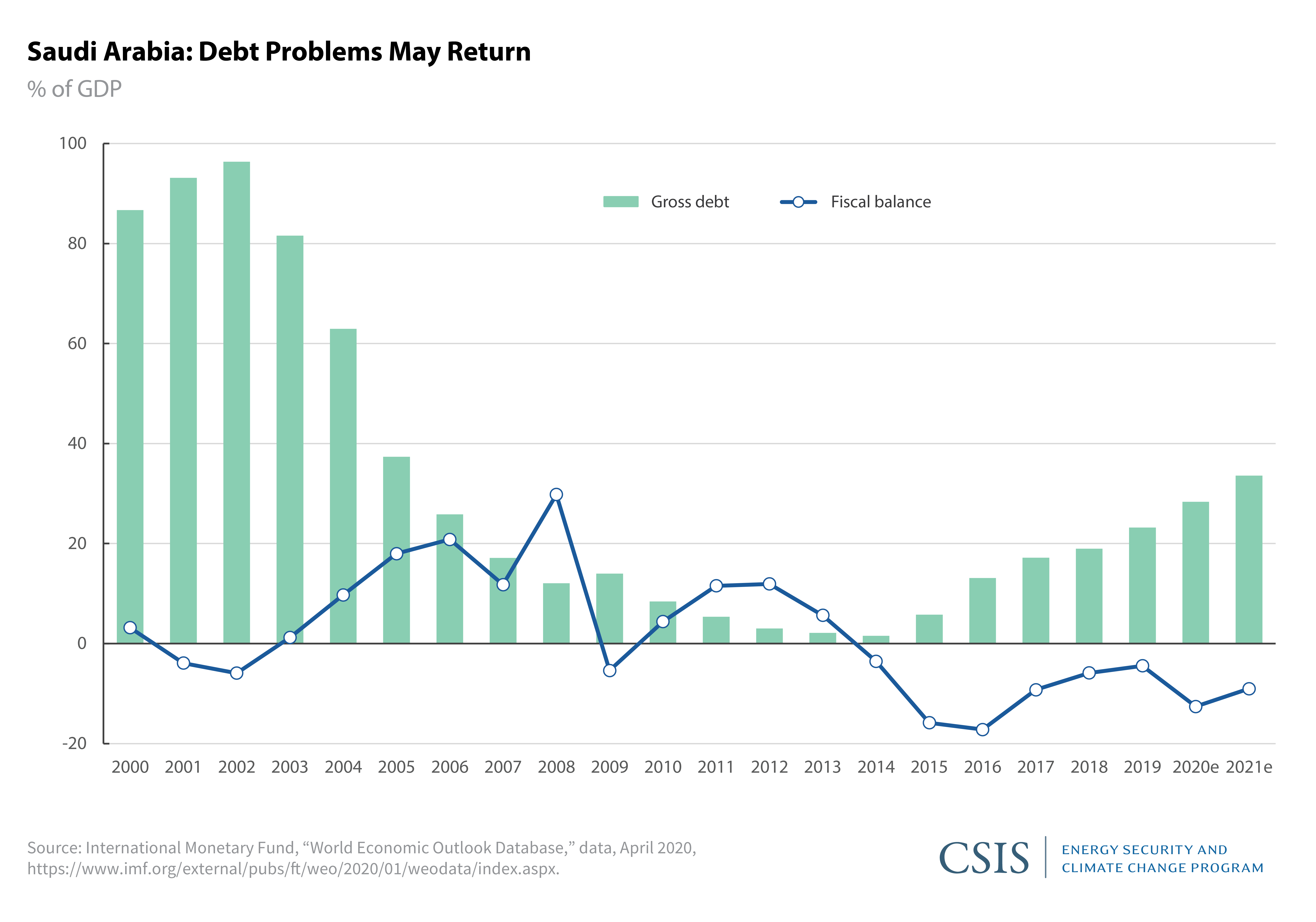 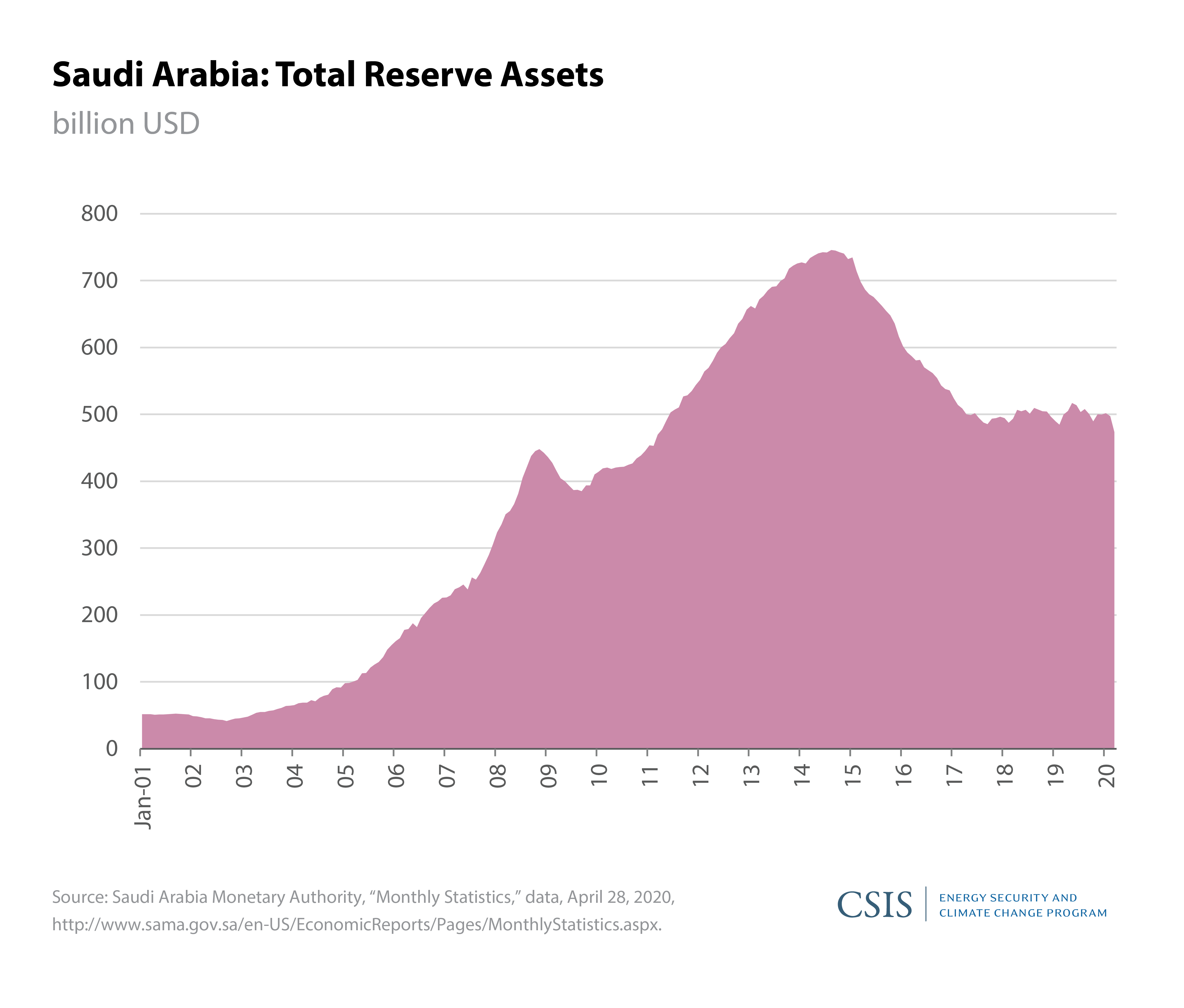 The wide deficit means that a rapid increase in debt is inevitable. Saudi Arabia suggests it could raise $58 billion in new debt this year—as much as the previous two years combined. It has already issued $19 billion in debt in 2020, according to Bloomberg, including a recent bond issuance of $7 billion. Saudi Arabia tapped international debt markets before it needed to in the past few years, which will probably facilitate new bond issuances.

The drawdown of foreign exchange reserves has begun as well. Saudi Arabia’s reserves have been fairly steady since early 2017, after several years of steep declines. But in March, the central bank’s net foreign assets fell by $27 billion. Reserve depletion at this rate will not continue for long if the kingdom can avoid it. But a similar burn rate for more than two or three months would send a serious warning signal to investors.

Finally, Riyadh is likely to continue leveraging its oil sector. Last year, national oil company (NOC) Saudi Aramco issued its maiden international bond for $12 billion. Aramco is reportedly considering a new corporate bond of about $10 billion, with the funds earmarked to help underwrite last year’s $69.1 billion acquisition of state petrochemicals giant Saudi Basic Industries Corp. (SABIC). Generally, it is a red flag when sovereigns borrow through their NOCs, which can tie companies to political directives and erode their borrowing capacity for core investments. As the state runs into fiscal trouble, Aramco could find itself pushed in new directions as it evolves into not merely the kingdom’s revenue engine, but a source of direct financing.

The GCC states face a lingering concern beyond the miasma of Covid-19: what if there is no return to business as usual for oil exporters? There is much speculation over the potential for permanent changes in consumption if more people opt to telecommute and curtail driving and flying. The coronavirus impact is pulling forward some projections of peak demand. Even the International Energy Agency’s estimate of annual demand growth averaging around 1 million barrels per day in 2019-2025 could prove too optimistic.

It is easy to imagine a scenario in which persistent deficits, rising debt, and flagging growth drag down the Gulf economies for years to come. Lower oil rents mean less patronage money, making it more difficult to keep business elites in line and encourage investment. And slower growth and job losses would lead to an exodus of many expatriate workers.

On the other hand, if oil prices remain subdued for several more years, the Gulf states may again have strong incentives to adjust their economic model. Variations on the Dubai approach—including liberal trade and investment laws, rapid approvals, low or nonexistent taxes, and a favorable regulatory environment—have served the Gulf well. But the returns on this model are diminishing, partly because many of the GCC states are chasing after the same industries and investors. Overcapacity in real estate is often cited as a sign that Dubai’s business model needs a reset.

An important area of focus would be prosaic regulatory and legal changes, as opposed to flashy infrastructure projects. Saudi Arabia has already taken some steps in this direction as part of its Vision 2030 reforms. Privatization of some state businesses, as well as public-private partnerships, could help raise capital and provide investment opportunities. And the Gulf states could also lean on their sovereign wealth funds, which have traditionally invested abroad in order to provide diversification and limit dependence on hydrocarbons. Funds like Mubadala in Abu Dhabi and Mumtalakat in Bahrain could play a more overt role in attracting foreign investors to targeted companies and industries.

Ultimately the GCC states face a familiar dilemma: lower oil revenues increase the urgency of economic reforms, but governments are reluctant to take politically risky steps during downturns. Since 2014, there have been some positive moves in energy subsidy reform and the introduction of new taxes—topics once considered taboo in the Gulf. Progress in those areas has been mixed, but the initiatives show that economic pressure can yield surprising results. The Gulf states are again headed for hard times, but this is an opportunity to rethink diversification strategies and experiment with new policies.

European Union Prepares to Ban Russian Oil
By Ben Cahill
May 10, 2022
In the News 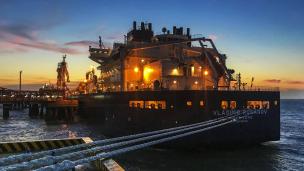 Reducing Methane Emissions from Global Gas
By Ben Cahill
May 2, 2022
On Demand Event 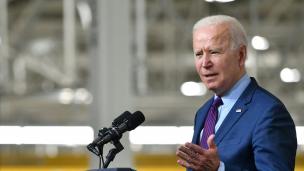