The economic consequences of large-scale disease outbreaks can be enormous: pandemics could cause $570 billion per year in average economic losses over the coming decades. Health security threats have an especially destructive impact on development investments and GDP in low-income and lower-middle-income countries (LICs and LMICs): the 2014-2015 Ebola outbreak in West Africa wiped out nearly five years of existing investments in the region, gravely setting back the region’s future development prospects. By contrast, upgrading countries’ preparedness is relatively inexpensive and affordable; recent data demonstrates most countries would need to spend approximately $0.50-$1.50 per person per year to get an acceptable level of epidemic preparedness.

The financing gap for preparedness is one of the starkest problems in health security, especially among LICs and LMICs. That gap is estimated at $4.5 billion per year. Investments in preparedness are cost-effective and affordable, but low-income and lower-middle-income country governments continue to underinvest at dangerously low levels. These governments bear lead responsibility for addressing financing gaps, but external funding can be catalytic. At present, there is no financing mechanism and no adequate incentive structure to motivate governments in high-risk countries to invest in preparedness, particularly when those investments compete with more visible priorities such as education, housing, transport infrastructure, and other pressing health needs. As a consequence, countries remain ill-prepared and vulnerable to the persistent threat of pandemics and large-scale disease outbreaks.

The World Bank Group’s International Development Association (IDA) replenishment takes place every three years and presents a choice opportunity to make adjustments that reflect important emerging priorities. In the current IDA19 replenishment, stakeholders can take a major step towards closing the preparedness financing gap by incentivizing $1 billion or more per year in preparedness investments in LICs and LMICs.

Pandemics and high-risk disease outbreaks spread quickly, rapidly infect large numbers of people, and can escalate swiftly into regional epidemics or even a global pandemic. Estimates are that an influenza pandemic could infect billions, kill millions, and damage the global economy.1 The risk of health security threats is especially high in fragile and conflict-affected settings, concentrated among low-income countries (LICs). The ongoing, highly-dangerous Ebola outbreak in the Democratic Republic of the Congo is the second-largest Ebola outbreak in history and presents a significant, escalating threat to the region and potentially beyond. Responders struggle amid continued violent attacks, community resistance, weak existing health security capacity, and insufficient international financing.

Underinvesting in preparedness undermines other critically important health objectives. For example, outbreak threats endanger ongoing efforts to combat antimicrobial resistance (AMR). AMR can contribute to serious illness and death during a large-scale outbreak and is a major health security risk globally in its own right. The AMR threat is rising, as common infections become deadly due to widespread drug resistance. 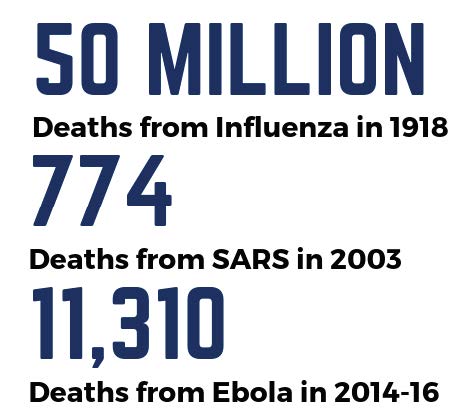 Investing in preparedness yields significant returns. The potential economic impact of large-scale outbreaks is huge: pandemics could cause average annual economic losses of 0.7 percent of global GDP, or $570 billion each year, over the coming decades.2 On the other hand, the cost of preparedness for the next health security crisis is relatively modest, with an estimated cost of $4.5 billion per year.3 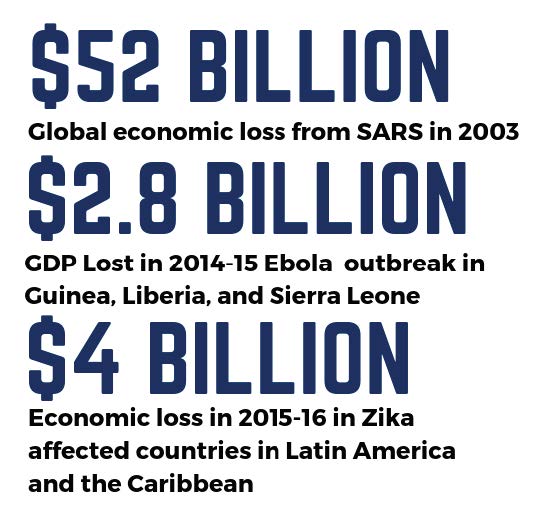 Without strong preparedness systems already in place, outbreaks are much more likely to spread out of control and undermine development investments. For example, the 2014-2015 Ebola outbreak in West Africa caused at minimum $2.8 billion in losses in GDP in the three most affected countries, primarily through disruptions in mineral and agricultural production, trade, new investment, banking, and transport.4,5 The outbreak wiped out nearly five years of World Bank Group (WBG) investments in the region and set back the region’s future development prospects.

Since 2014, 45 IDA-eligible countries have undertaken a national preparedness assessment (a Joint External Evaluation, or JEE)6 of their capacity to prevent, detect, and respond to epidemics and pandemics. Of these countries, 31 have already developed National Health Security Action Plans to address these gaps. None of these action plans has been adequately financed.

The costs of upgrading defenses against health security threats are just a fraction of the resulting costs of epidemics. Recent costings suggest that most countries would need to spend $0.50-$1.50 per person per year to get to an acceptable level of epidemic preparedness.7 For most countries, this is less than 2 percent of what is spent on healthcare. 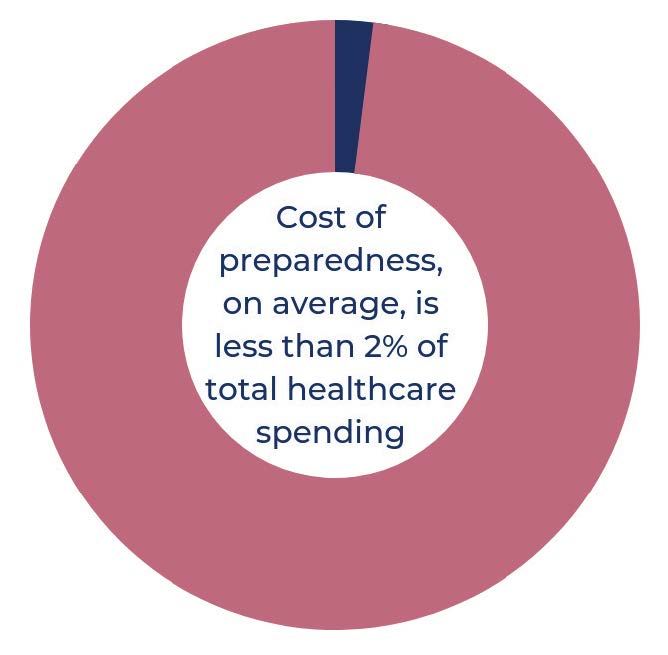 Strengthening health security preparedness often receives very low priority in country budgets, despite the catastrophic risk to health and economies from a major epidemic. Many low-income countries underinvest in preparedness due to a lack of resources. A related factor is that preparedness creates outcomes that are often not visible, competing against investments in roads, housing, and education.

Why Do LICs and LMICs Underinvest in Preparedness? 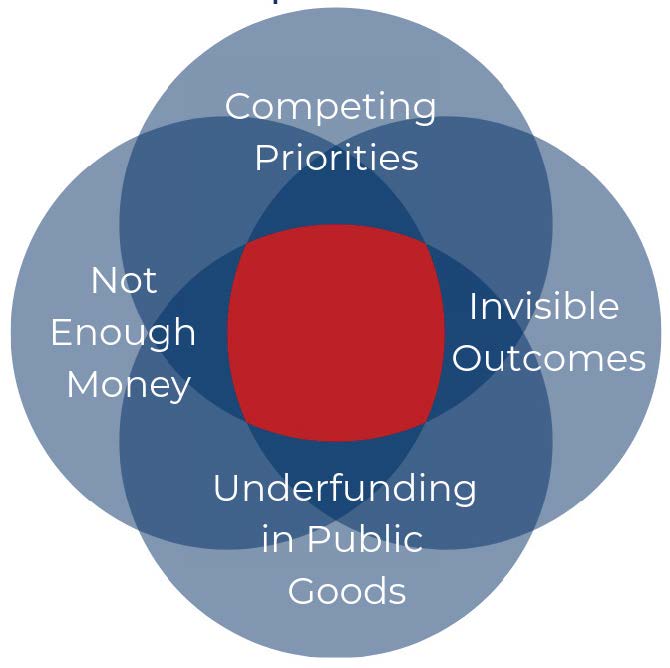 There is a need to create new financial mechanisms that incentivize low-income countries to increase investments in their preparedness and begin to close the $4.5 billion global funding gap. Low-income and lower-middle-income country investments in basic preparedness are strikingly low. Bilateral development assistance for health security will continue to play an important role in closing the financing gap, but dedicated funding for increasing preparedness in low-income countries has been limited. The United States led the way in this area through the $1 billion in Ebola supplemental funding appropriated by Congress for fiscal years 2015-2019, and these investments should be sustained post-2019 as part of the U.S. commitment to the Global Health Security Agenda. The G7, South Korea, and Australia have also pledged resources, but the size and sustainability of these funding streams fall far short of what is required. For the United States and other donors, the challenge is to find a combination of regularly budgeted bilateral investments and multilateral investments to adequately finance preparedness investments in low-income countries.

On the multilateral front, over the past several years the World Bank Group has established itself as the leading international financier for health emergency preparedness and response in LICs and LMICs. It can do more. The WBG’s International Development Association (IDA), its fund for the poorest countries, has a Crisis Response Window (CRW) that provided grant funds for the Ebola emergency response efforts in 2014.8 IDA is also supporting some discrete country preparedness efforts such as the Regional Disease Surveillance Systems Enhancement Program (REDISSE) in West Africa. However, although IDA’s shareholders made enhancing preparedness a special focus of the IDA18 replenishment in 2016, to date this has not yielded sufficient resources devoted to preparedness. One conclusion: new catalytic financial mechanisms are needed.

The IDA19 Replenishment is a choice opportunity to achieve at least $1 billion per year in new investments in preparedness by LICs and LMICs. In addition to continuing the progress made through increasing allocations with existing World Bank mechanisms and projects, the pathways that might achieve this objective, singly or in combination, are threefold:

Whichever pathway(s) is chosen, the goal is to achieve at least an additional $1 billion per year into preparedness investments in LICs and LMICs. The financing gap for preparedness is an enduring and dangerous problem in health security. There is a strong political and investment case for leveraging IDA to address the gap in low-income countries, and the IDA19 replenishment presents a key opportunity to take action. Concrete options are available, and with sufficient political will, World Bank shareholders and IDA deputies have the ability to begin to achieve significant progress in narrowing the financing gap in creating sustainable preparedness capacities.

This brief is a product of the CSIS Commission on Strengthening America’s Health Security, generously supported by the Bill & Melinda Gates Foundation.

1Bill Gates, “Innovation for Pandemics,” New England Journal of Medicine 378, no. 22 (May 2018): 2057-2060, DOI: 10.1056/NEJMp1806283.
2Victoria Fan, Dean Jamison, and Lawrence Summers, “The Inclusive Cost of Pandemic Influenza Risk,” National Bureau of Economic Research Working Paper No. 22137, March 2016, https://www.nber.org/papers/w22137.
3Commission on a Global Health Risk Framework for the Future, “The Neglected Dimension of Global Security: A Framework to Counter Infectious Disease Crises,” National Academy of Medicine, 2016, https://www.nap.edu/catalog/21891/the-neglected-dimension-of-global-security-a-framework-to-counter.
4World Bank Group, “2014-2015 West Africa Ebola Crisis: Impact Update,” 2016, http://pubdocs.worldbank.org/en/297531463677588074/Ebola-Economic-Impact-and-Lessons-Paper-short-version.pdf.
5The total global economic and social costs of the 2014-2015 Ebola outbreak are now estimated to be $53.19 billion. See Caroline Huber, Lyn Finelli, and Warren Stevens, “The Economic and Social Burden of the 2014 Ebola Outbreak in West Africa,” The Journal of Infectious Diseases 218, (October 2018): p.S698–S704, https://academic.oup.com/jid/article/218/suppl_5/S698/5129071.
6The Joint External Evaluation (JEE) is a transparent, external evaluation of a country’s ability to find, stop, and prevent disease threats. It assesses capacities across 19 areas of epidemic preparedness and response that are scored first by a group of domestic experts and then by an external group of international experts. The assessment is voluntary and conducted every five years. The results are reported by the World Health Organization. For more information visit: https://extranet.who.int/sph/ihrmef.
7See: International Working Group on Financing Preparedness (IWG), From Panic and Neglect to Investing in Health Security: Financing Pandemic Preparedness at a National Level (Washington, DC: World Bank, December 2017),http://documents.worldbank.org/curated/en/979591495652724770/pdf/115271-REVISED-FINAL-IWG-Report-3-5-18.pdf. The IWG estimates $0.50-$1 per person per year would be needed, although there is variation in cost estimates by country. The range of $0.50-$1.50 captures most reasonable estimates.
8The World Bank’s International Development Association (IDA), created in 1960, provides grants and low- to zero-interest loans to developing countries using the backing of multilateral donors. IDA is overseen by the 173 shareholder countries which comprise the Board of Governors. IDA is funded largely by contributions from the governments of richer countries. A smaller amount of contributions come from the income of the International Bank for Reconstruction and Development (IBRD) and International Finance Corporation (IFC) and from borrowers’ repayments of earlier IDA credits. Every three years, partners meet to replenish IDA funds and review its policies. The United States is the largest contributor historically (22 percent), with Japan, Germany, the United Kingdom, and France rounding out the top five. Due to its large contribution to the most recent replenishment, the United Kingdom is now the second largest contributor. The most recent replenishment of IDA’s resources, IDA18, was finalized in December 2016, resulting in a record replenishment size of $75 billion to finance projects over the three-year period from July 1, 2017 to June 30, 2020.