Tropical Storm Harvey came ashore for a second time yesterday, east of Houston along the Texas-Louisiana coast. Downgraded now to a tropical depression with reduced winds, the rain bands nonetheless pounded Port Arthur and Beaumont, continuing to shutter refineries and associated energy infrastructure in its path. As indicated in our earlier posting this week (“Energy Impacts of Harvey Will Be Felt Globally”), while we lament the suffering of colleagues and friends in Houston and along the Gulf Coast, the rest of the country is just now beginning to experience the aftermath of Harvey’s effects.

As of this morning, about 19 percent of both oil (324 thousand barrels per day [kb/d]) and natural gas (611 million cubic feet per day [MMcf/d]) production from federal acreage in the Gulf of Mexico remain offline. Additionally, the Texas Railroad Commission estimates that between 300 and 500 kb/d of crude oil production has been shut in mainly in the Eagle Ford region. At this writing, between 4 and 5 million b/d of Gulf Coast refining capacity remains offline or operating at reduced levels. Major ports and loading facilities are either closed (pending completion of damage assessments) or operating under restricted conditions. Flooding has also impacted terminal/fuel racks and truck routes for overland deliveries.

The shuttering of refinery operations in Texas and Louisiana predictably has reduced both crude oil demand and, more importantly for now, refined product supply, including gasoline, diesel, and aviation fuels. And this morning, the Colonial Pipeline (which operates between Texas and New Jersey), as well as sections of other large regional carriers, are either shut down or operating at reduced capacity, meaning that fuel deliveries outside the Gulf region will likely see reduced supply and higher fuel prices. Colonial reported today that its system was operable east of Lake Charles, but that deliveries were intermittent without steady terminal and refinery supplies. EPA is waiving seasonal restrictions on the use of higher ethanol (E15) fuel in a dozen states and the District of Columbia. 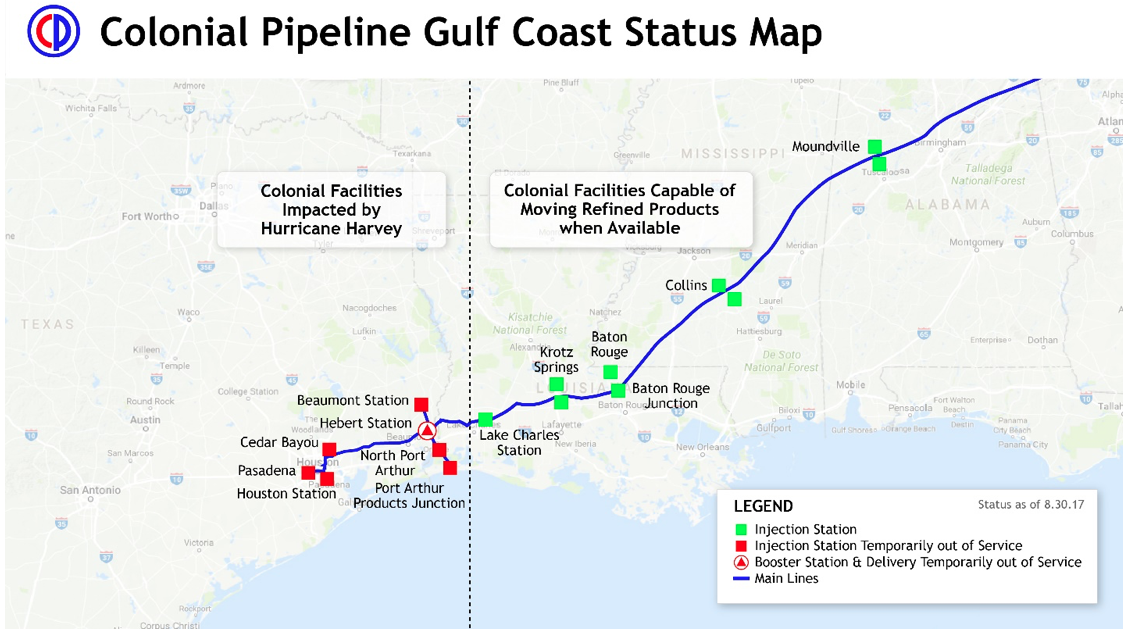 Gasoline prices along the East Coast have already risen to levels not seen in two years. And as the nation prepares for the Labor Day weekend, motorists are bracing for higher prices at the pump, conceivably longer lines, and spot outages, especially if a hoarding mentality motivates consumers to transfer tank farm inventories to the gas tanks of their cars.

As the United States has recently become a major oil supplier and exporter of crude and refined products, impacts to the Gulf Coast carry international ramifications as well. Product tankers already at sea are now being diverted to U.S. ports, though likely delivering cargoes with sizable premiums. Internationally, traders/brokers are reportedly lining up refined product shipments from Europe and Asia to replace lost U.S. supplies, but given seaborne transit times, those shipments will take weeks to arrive. In the interim, as higher prices dampen some of the expected demand, we will have to rely on additional supply volumes from unaffected refineries (to the extent they can boost utilization rates and output), imports where they are available, and withdrawals from local and regional stocks until impacted refiners and pipelines can resume normal operations.

Although rescue and recovery operations continue along the Gulf Coast, operational recovery still looks to be weeks away and full recovery/reconstruction months off.

Meanwhile, in the weeks and months ahead, we will have ample time to reflect on this calamity, the risks and challenges posed by our new-found energy role in the world, and how we ensure that we
develop and deploy advanced and informed technology, engineering, policy, and planning to mitigate the impacts of such events in the future.

For more CSIS analysis on the impacts of hurricane Harvey, see Energy Impacts of Harvey Will Be Felt Globally and Harvey’s Assault on the Gulf Coast Raises Questions about Energy System Resilience and Policy Choices.

© 2017 by the Center for Strategic and International Studies. All rights reserved.
Photo credit: Win McNamee/Getty Images
Written By