Over the past several months, the CSIS Energy and National Security Program has produced a variety of commentaries, podcasts, and events focused on the deteriorating conditions in Venezuela’s oil patch and its impact on the local economy and global oil markets. Today, with the help of a series of informational graphics from Kayrros (an energy data analytics company), we offer readers a visual depiction of exactly what is going on.

Venezuela’s loss of production volumes was the largest global unplanned fall in crude oil output in 2017, a trend that has continued to intensify into 2018 and has the potential to get significantly worse in the coming months. 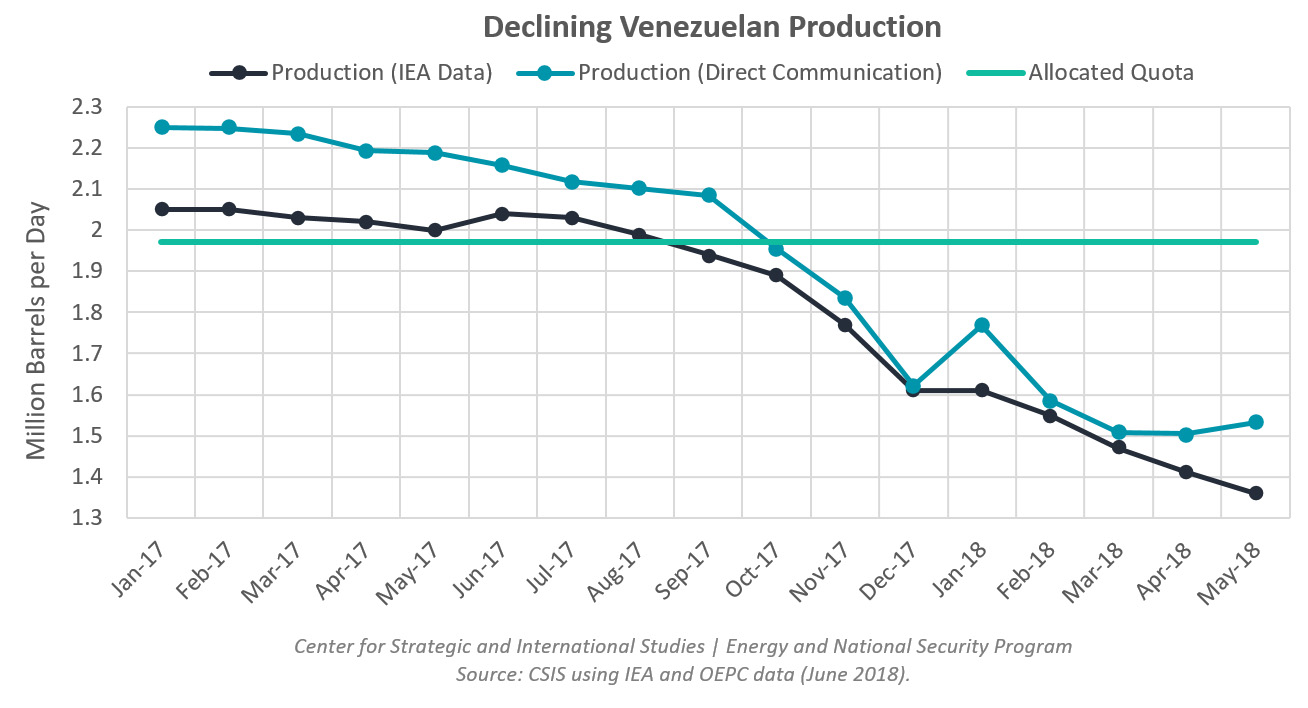 According to the latest data, Venezuela’s crude oil production now stands at its lowest level in more than 50 years. Output in May averaged 1.36 million barrels per day (b/d), down from 1.41 million b/d in April. Monthly losses so far in 2018 have averaged more than 3.5 percent and the country is now producing more than 600 thousand barrels per day (kb/d) below its targeted level under the OPEC/Non-OPEC agreement. In fact, much of the success of the cohort in working off the overhang in global oil inventories can be attributed to the Venezuelan oil industry’s misfortune. Working from the supply baselines upon which each country cut its production, Venezuela’s reduction in output for May even surpassed that of Saudi Arabia’s, resulting in rate of compliance for the month of over 700 percent. And as the OPEC/non-OPEC members of the Vienna Group convene this week to assess the state of global oil markets, potentially with an eye toward relaxing some of the production restrictions, Venezuela’s deteriorating condition looks poised to continue and only get worse. 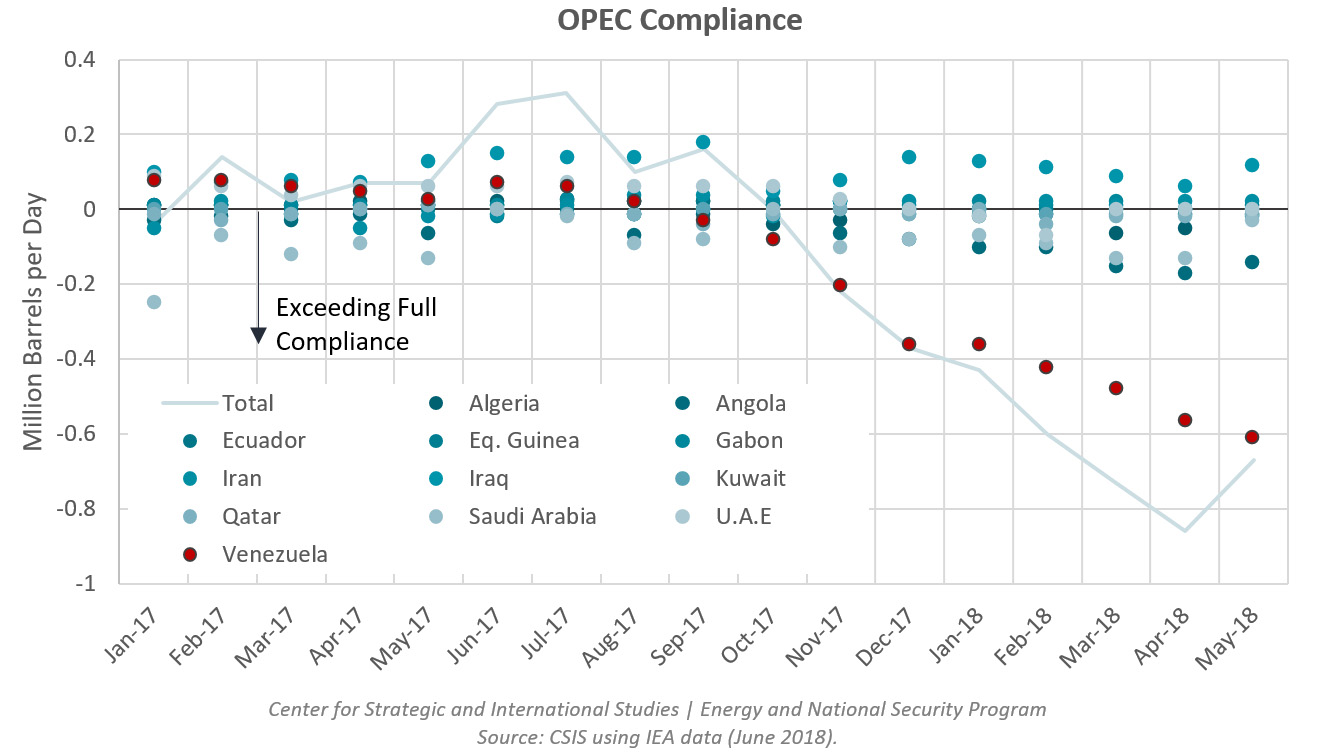 The culmination of chronic mismanagement and underinvestment, which resulted in shortages of basic equipment and supplies for years now across Venezuela’s oil fields, has all taken its toll. Analysis from Kayrros, including its latest satellite surveillance of oil fields in the Orinoco region, the El Furrial Giant, and the Jusepin block in the eastern basin, appears to document the magnitude of a deepening crisis for the nation’s oil industry, where recent efforts to arrest the rate of production declines have failed. 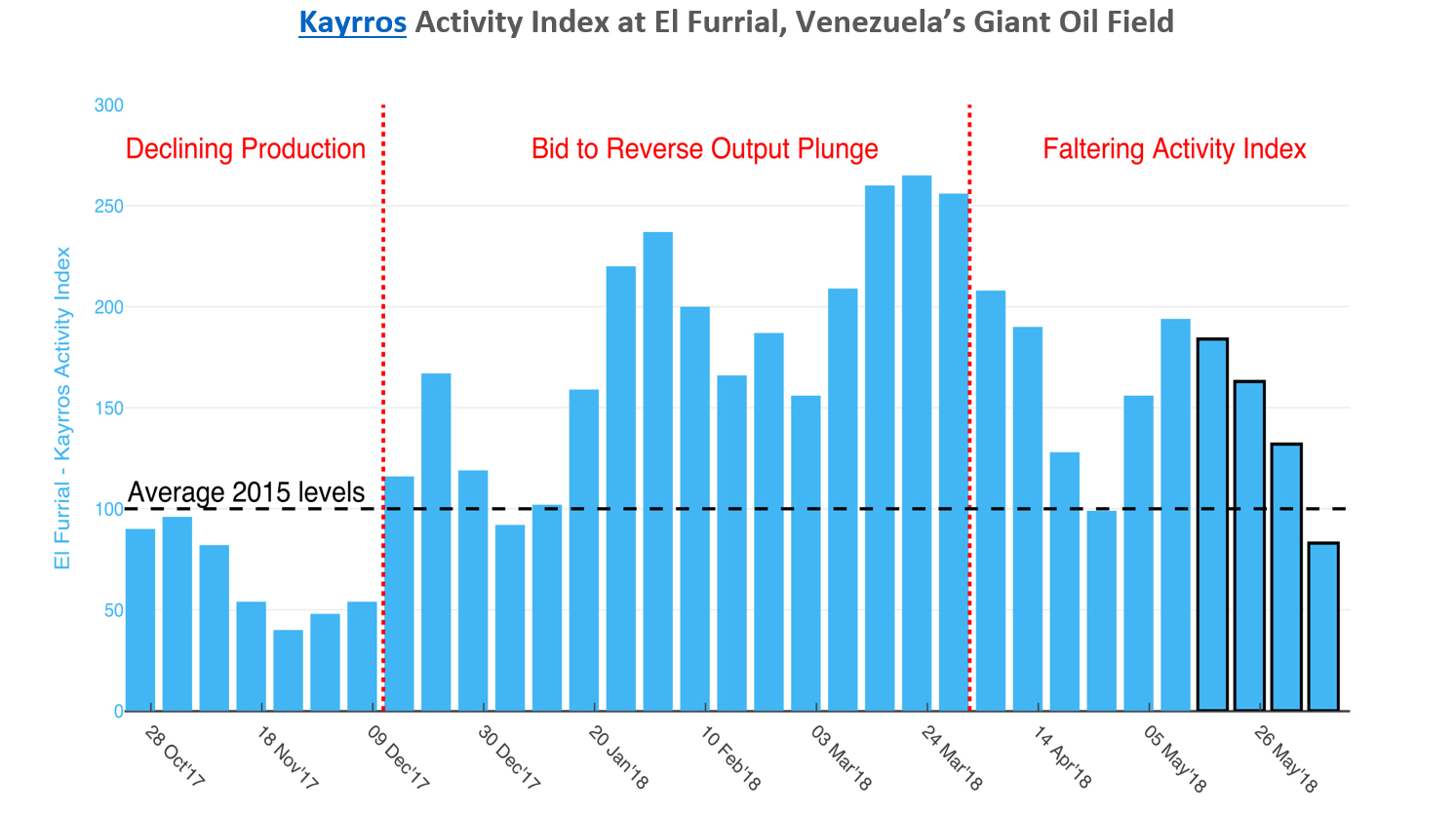 * The Activity Index displayed above is a measure of the heat signature coming from the flaring facilities at El Furrial using satellite images (see also below). The measured level of flaring at the El Furrial field is converted into the above index by setting a base of 100 as the average heat signal measured throughout 2015. 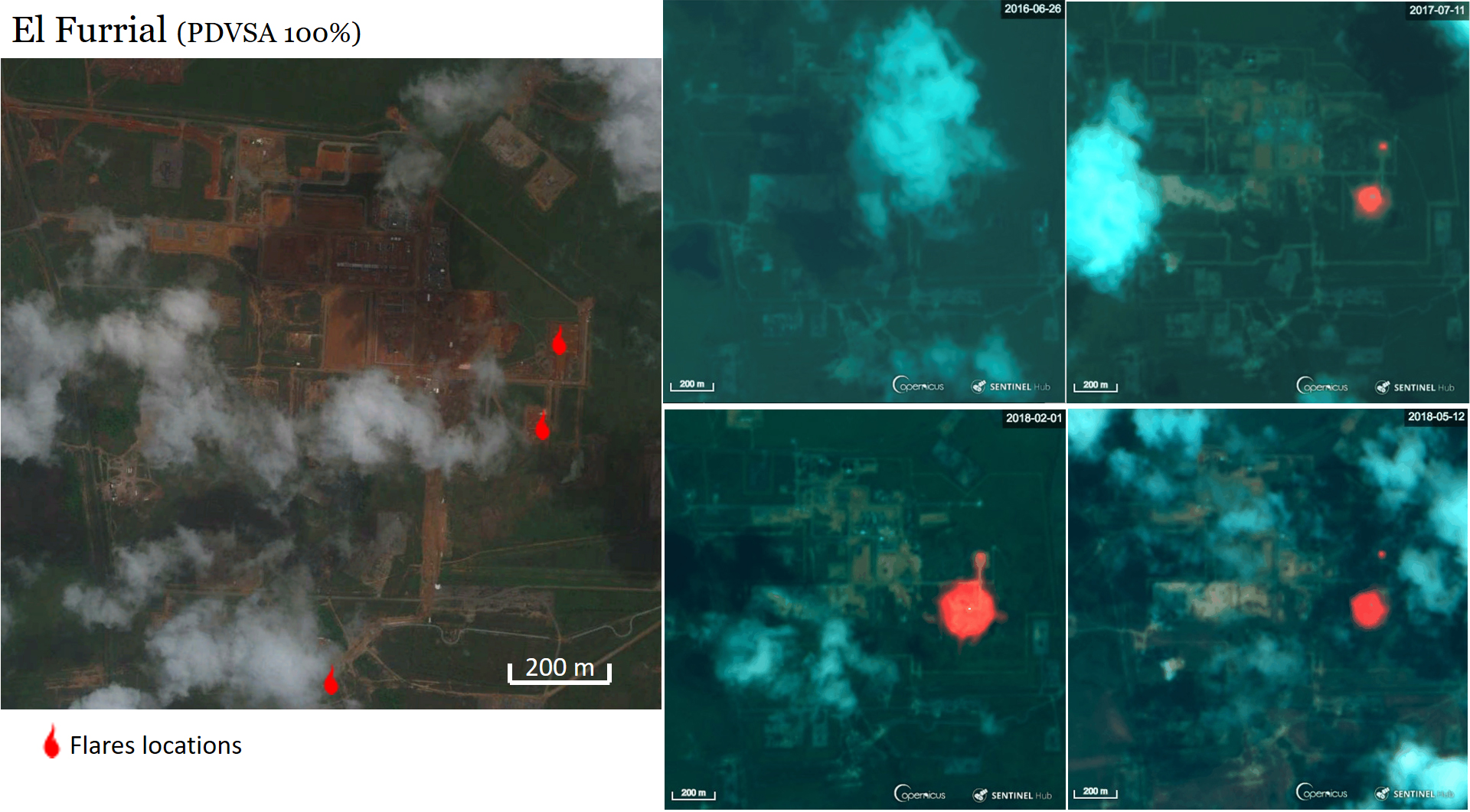 For example, the El Furrial field showed a brief spike in activity levels during the first quarter of 2018, in line with Oil Minister Manuel Quevedo’s ambition of rekindling production growth. However, for a variety of technical reasons, this short-term increase could not offset the field’s precipitous decline, as reflected in a new drop in activity levels in the following months. This example is indicative of a larger trend occurring across the country.

Other dynamics such as challenges in sourcing diluents for upgraders in the Orinoco belt, payment difficulties, logistical challenges, and labor shortages have further exacerbated the situation. Major difficulties have also presented in terms of exporting crude, with Conoco’s asset seizures forcing Petróleos de Venezuela, S.A. (PDVSA) to divert exports, which would have traditionally been directed to Caribbean storage and loading facilities. Logistically, this diversion has resulted in a major backlog of exports, with more than 24 million barrels of crude oil waiting to be loaded onto 70 tankers sitting in queue in the Caribbean Sea (as of the first week of June). PDVSA is now exploring options of lightering oil cargoes (transferring cargo between vessels) off the coast to reduce the backlog and has said that it will impose force majeure if costumers do not agree to new delivery terms. With the majority of Caribbean operations no longer available, PDVSA will mainly export from just two terminals at Puerto Jose and Puerto La Cruz. These logistical constraints will cause delays for the forseeable future and increase shipping costs. 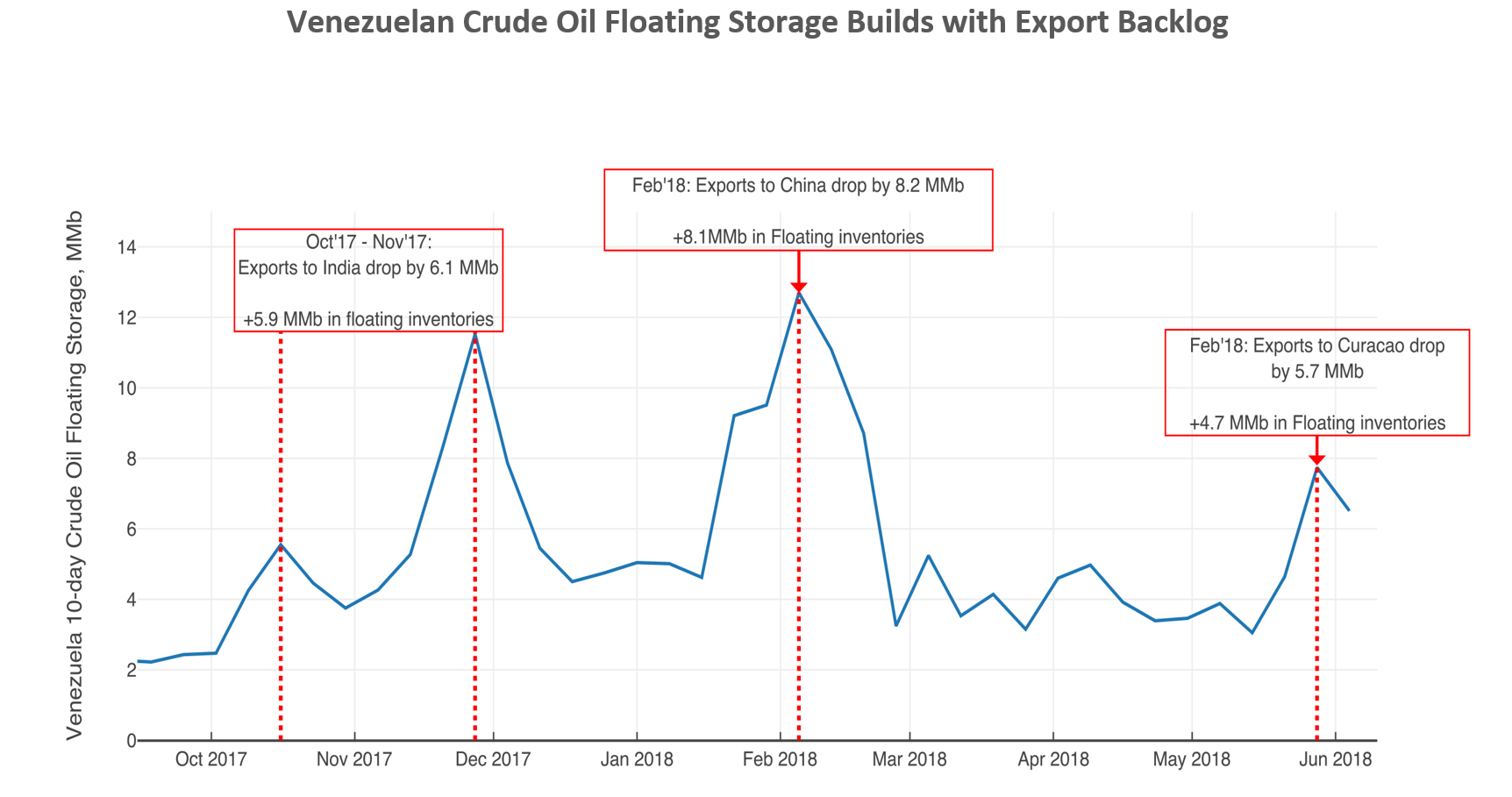 In light of these various challenges, exports stood at just 1.01 million b/d in May, a record low. The United States is still the largest single destination for Venezuelan crude oil exports, while Asia (namely China and India) has increasingly become the largest market. Whether the center of gravity continues to shift eastward for Venezuelan crude exports is dependent on several factors. One major factor is that Venezuela remains heavily indebted to China, including various oil for loan deals upon which they were granted a two-year grace period for repayment in 2016. That grace period expired in April, which means that a greater proportion of a barrel exported to China today will go toward servicing that debt, resulting in reduced cash flows on those exports. This may result in cash hungry Caracas directing those barrels elsewhere to preserve cash flow. In fact, recent data indicates that exports to China since March have already seen a significant reduction, with a greater proportion of exports flowing to India and U.S. Gulf Coast refineries again. Recent press reports also indicate that Venezuela intends to suspend exports of refined products to 8 of the 17 Petrocaribe countries but continue to supply Cuba. 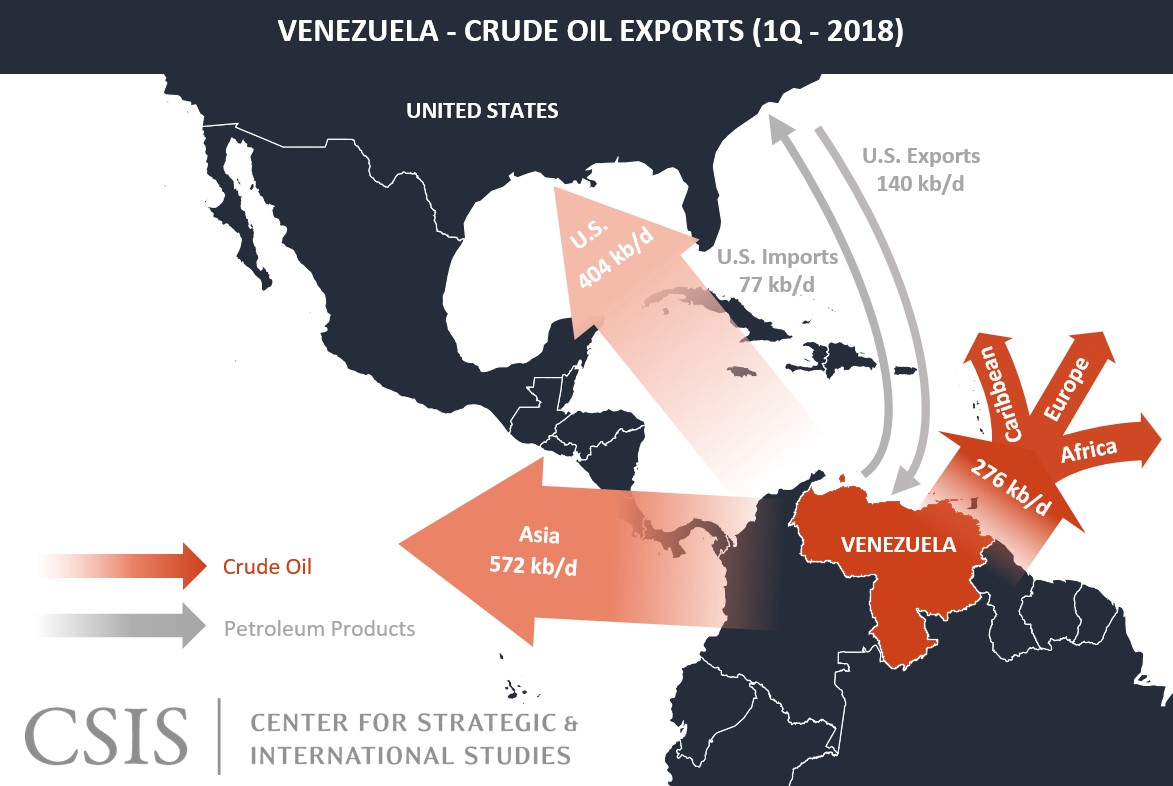 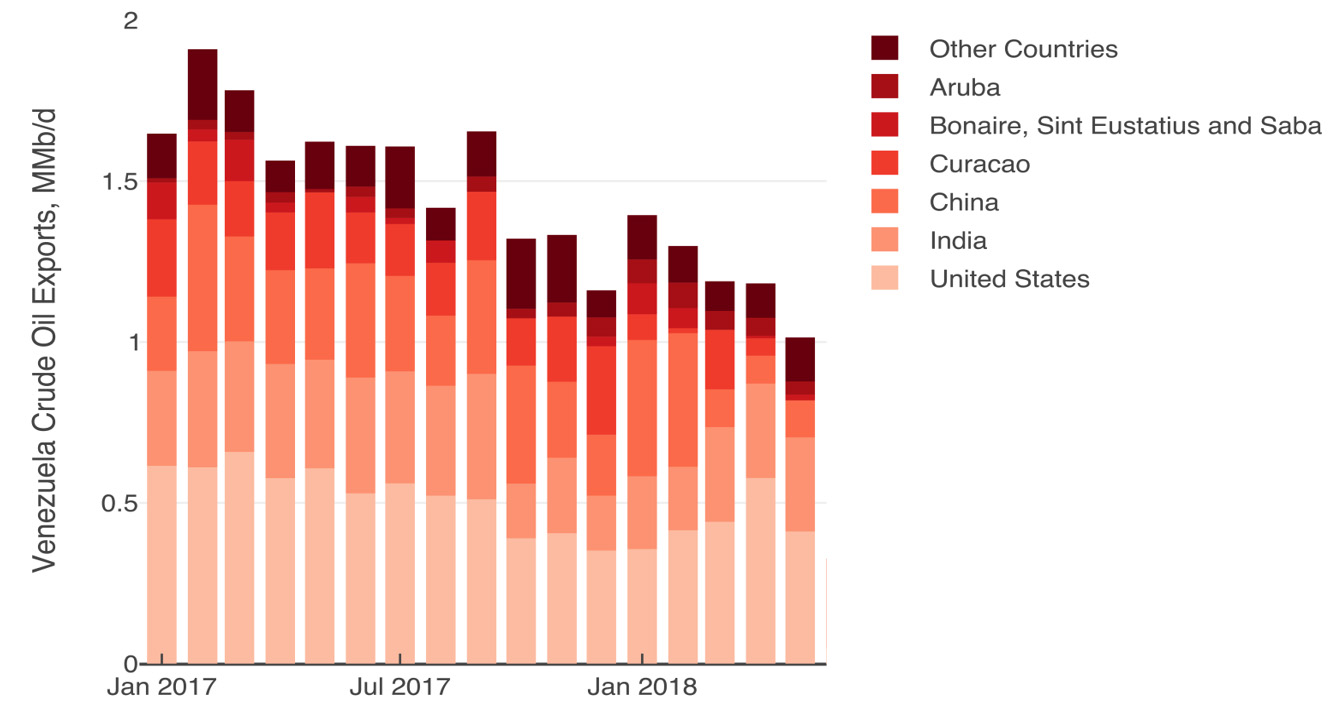 Complicating matters further for Venezuelan exports are U.S.-led sanction efforts. Financial sanctions are already causing major difficulties for the country in servicing its debt, and additional sanctions reportedly remain under consideration, including an expansion of personal sanctions on individuals, along with the possibility of prohibiting condensate and refined oil product exports to Venezuela and/or banning oil imports from the country. However, the options and timing of any actions are now likely to be tempered by concern over higher oil prices (given the Trump administration’s recent decision to reimpose sanctions on Iran) and partly as a consequence of the administration’s reluctance to impose additional hardship on the Venezuelan people.

Today, U.S. imports of Venezuelan crude oil are at a record low, having rapidly declined over the past year in tandem with the fall of its crude oil production and further supported by proactive measures of U.S. refiners to wean themselves from these imports in light of possible oil sanctions. The latest available data shows that the United States imported 404 kb/d in the first quarter of the year and that in March over 85 percent of those imports went to just five refineries owned by CITGO and Valero. Preliminary data for May shows that U.S. imports have fallen even further.

Venezuela’s woes do not end there. Refining operations have significantly deteriorated in the past year. The country has an installed refinery capacity of 1.62 million b/d; however, the 955 kb/d Paraguana Complex is the only refinery still in operation. This facility is processing crude at just 30 percent of its capacity (≈300 kb/d), and further declines look possible due to maintenance issues, as well chemical and labor shortages. This has resulted in a surge in Venezuelan petroleum product imports from the United States in the first quarter of the year. Further declines of refined product output could create significant shortages for the domestic market, creating the risk of additional economic and political turmoil.

The one bit of positive news for Venezuela over the past few months has been higher oil prices, which have provided the country with an economic lifeline in the past. Ironically, these higher prices have come about in part because of the dramatic collapse of its production and exports (contributing to a tighter global oil market). Unfortunately for Venezuela, higher prices will do very little to mitigate the effects of the severe collapse in its production and loss of revenues generally, especially in light of the quality issues and logistical difficulties Venezuela is experiencing in getting its oil to market. The uncertainties regarding the outlook for Venezuelan oil production are considerable; however, the factors all point in one direction—further declines are inevitable.