Hydrogen Hubs Proposals: Guideposts for the Future of the U.S. Hydrogen Economy

State and regional activity around low-carbon hydrogen has been ramping up in the United States since the Infrastructure Investment and Jobs Act (IIJA) appropriated $8 billion for the development of at least four Regional Clean Hydrogen Hubs (H2Hubs) across the country. The program aims to accelerate the use of clean hydrogen by creating a network of producers, consumers, and local connective infrastructure. Clean hydrogen is needed to help reach state and federal emissions reduction goals. The U.S. Department of Energy (DOE) is expected to issue a Funding Opportunity Announcement for the H2Hubs program by October of this year and announce selected projects by May 2023.

H2Hub concepts are emerging from initiatives around the country. The table below documents publicly available information about prospective hubs around the country. The 22 hub proposals described here are diverse, partly by design—the IIJA requires that DOE-funded hubs demonstrate geographic diversity, feedstock diversity, and end-use diversity. The H2Hubs program casts a wide net, but patterns across hub proposals provide some early clues about where hub actors want to take the emerging U.S. hydrogen economy. Hub hopefuls are devising strategic partnerships around robust resource endowments and promising end-uses, with keen attention to existing strengths and future hydrogen demand. 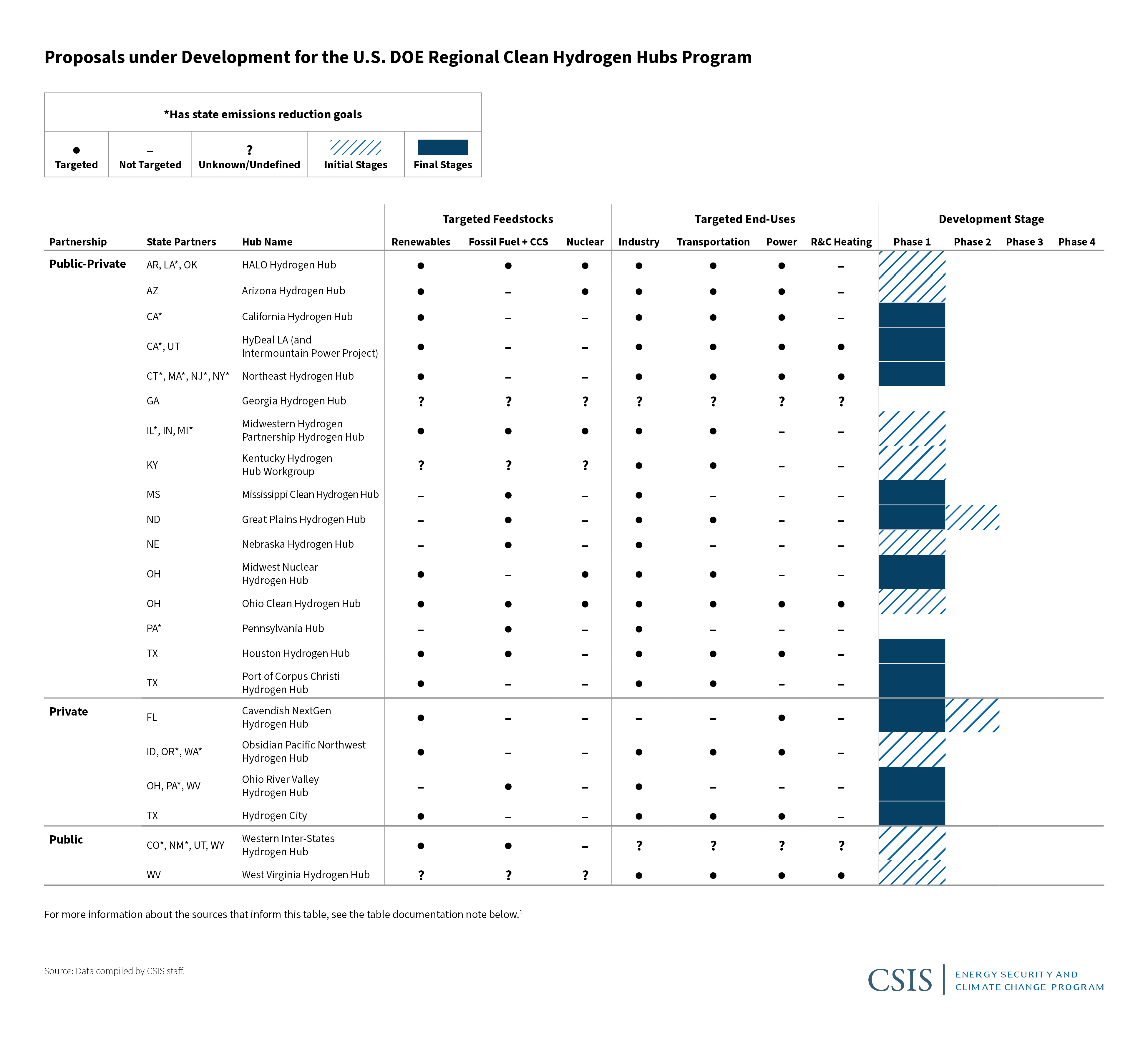 All hub proposals are preliminary.

It is important to preface this review with an acknowledgement that all hub proposals are in the early stages of development. Each prospective hub is by phase, reflecting the extent of conceptual development and project planning. The phases roughly correspond to DOE’s phasing described in the June Notice of Intent. Hubs identified at the initial stages of Phase 1 have formed formal working groups or signed memorandums of understanding. Hubs that have completed Phase 1 have feasibility studies, pilots, or demonstration projects underway. Projects in the initial stages of Phase 2 have acquired infrastructure or permits.

This review includes only proposals that have expressly signaled interest in the development of a hydrogen hub and funding related to the DOE’s H2Hubs program. Therefore, it does not include some regional developments around hydrogen production and commercialization, like the E4 Carolinas in North Carolina and South Carolina, which could decide to pursue H2Hubs funding before October.

This commentary is informed by a comprehensive review of hydrogen hub proposals by CSIS staff. A lot is happening around this topic, so the authors will make an effort to update this review with new information or additional hubs as details are made available.

Public-private partnerships (PPPs) are emerging as the most favored project structure for regional hubs. A diverse array of entities are steering PPPs, from state agencies and research institutions to private companies and advocacy groups. The PPP model is especially useful for spurning investment and anchoring economic benefits locally, offering benefits to both public and private stakeholders.

In the early stages of hub establishment, public partners in PPPs stand to benefit from the private sector’s ability to efficiently marshal resources and leverage existing investments (cost-sharing with federal investment is a DOE funding requirement). For example, the HyDealLA Hub will benefit from the private, Utah-based Advanced Clean Energy Storage (ACES) Delta project, the largest in-development cluster for producing hydrogen with renewable energy at scale.

Private producers and takers of the new hydrogen supply can benefit from PPPs through capital contributions from public state and local institutions, like the University of Illinois at Urbana Champaign in the Midwestern Hydrogen Partnership Hub. Public resources are a critical source of support for innovation and high-risk investment in hub development.

PPPs can also lead to streamlined and supportive policies and regulation. For example, Mississippi’s hub already has multiple permits approved. As H2Hubs mature, supportive state and local policy frameworks will be especially important in ensuring sustained growth and connectivity to new markets through pipelines and exports.

Given the mutual benefits of PPPs, the two exclusively public hubs are likely to encourage private sector participation as they continue developing their proposals, to enhance capital advantages, and increase their chances of receiving DOE funding.

When it comes to feedstocks, proposed hubs build upon state resource endowments and legacy industries—except for nuclear.

As a resource for decarbonization, green hydrogen, produced from renewable energy, is a clear favorite. Fifteen out of 22 proposals aim to produce “green” hydrogen, with seven identifying it as the feedstock of choice and eight citing it as part of a wider feedstock portfolio. Ambitions for green hydrogen align with the policy goals of climate-motivated states, like California and New York, and with the renewable resource endowments like hydropower in Idaho and solar in Florida. The diversity of states targeting green hydrogen suggests broad recognition of both the declining costs of renewable electricity and electrolyzers. Proposed hubs with access to ports could be strategically positioned to become export centers once production scales up past domestic demand needs, as in the case with Georgia’s hub and the Port of Savannah.

DOE is statutorily required to fund hubs located in fossil-intensive regions. Ten of the identified hubs are moving forward with plans to produce “blue” hydrogen, sourced from fossil fuels paired with carbon capture and storage. Hubs targeting blue hydrogen are already working to identify credible carbon storage solutions, anticipating concerns related to how clean blue hydrogen can be, given challenges associated with managing upstream emissions. States with salt caverns—including Utah, Texas, North Dakota, and Mississippi—may have an advantage in terms of sizable and reliable storage potential, although these caverns could also house natural gas or newly produced hydrogen. Within the hubs banking on natural gas feedstocks, Nebraska’s hub is the only one targeting turquoise—rather than blue—hydrogen. This emerging zero-emissions hydrogen production method produces a solid carbon by-product, rather than CO2 gas.  As a result, there is no need for carbon capture and storage. Moreover, the resulting carbon can be commodified for use in applications, like soil improvement and manufacturing.

Nuclear energy—for “pink” hydrogen—has received the least attention across the country. To date, only five hubs have demonstrated interest in this feedstock: Ohio’s Midwest Nuclear hub, the OH2 Alliance, HALO, the Midwestern Hydrogen Partnership, and the Arizona hub. This list notably excludes prospective hubs along the East Coast and Midwest that are well-positioned to diversify their hydrogen feedstocks with their extensive nuclear power capacities. Limited interest in pink hydrogen is likely connected to broader challenges associated with nuclear sector development in the United States. However, DOE is expected to fund at least one H2Hub utilizing nuclear feedstocks, increasing the chances of funding for at least one of the five hubs pursuing pink.

Where they have a competitive advantage and existing investments, there are clear incentives for hubs to place exclusive focus on one of the three potential feedstocks. Focus on a single feedstock could help to expedite development and avoid spreading resources too thin. This could prove beneficial in the short term, particularly for hubs relying on existing natural gas infrastructure capable of providing comparatively cheap hydrogen. Hubs betting on diverse feedstock portfolios could require more resources and a longer window to successfully leverage their investments. However, they could also be better positioned to adapt to evolving market demands, reap forecasted future cost reductions, and sustain growth when DOE backing sunsets.

Proposed hubs are betting big on hydrogen for heavy industry and long-haul transportation.

The industrial sector is the most widely targeted end-use. Twenty of the 22 proposed hubs are focusing on oil refining, steel production, or chemical applications, especially ammonia for fertilizer production. These industries presently account for the majority of hydrogen demand and are promising takers of future hydrogen supply because of their intense energy requirements. Manufacturing and industrial heat applications are another common target, especially near manufacturing centers like Ohio. Other industrial applications in port and airport logistics are expected sources of future hydrogen demand, but these applications are seldom mentioned in hub proposals so far.

The transportation sector is the second-most targeted end-use. Sixteen hubs are particularly focused on the strong growth segment represented by heavy-trucking and long-haul vehicles, where hydrogen is proving to be a better-suited decarbonization pathway than electrification. Other transportation applications reflect more regional specificity, like freight and rail in Illinois and maritime applications in Louisiana.

Twelve hubs have proposed power sector applications, aiming to incorporate hydrogen into a burning blend with natural gas to reduce emissions associated with combustion turbine (CT) and combined cycle (CC) electricity plants. Of the 12, two hubs – HALO and HyDealLA – aspire to phase out natural gas and burn hydrogen exclusively in the future. Eight of the 12 hubs are focused on the storage potential of hydrogen, which is presently less costly than battery storage of electric power. Stored hydrogen could serve as a future load balancer and resource to avoid renewables curtailment, although none of these proposals mention this application specifically. Of the eight proposals focused on storage, three proposals also describe hydrogen as a potential source for emergency power and back-up generation, using fuel cells to replace existing diesel-generators.

Only two hubs have explicitly incorporated residential or commercial heating as a targeted end-use—NYSERDA and HyDealLA. In one sense this is surprising, as residential and commercial heating is one of four end-uses the DOE’s H2Hubs program expects to target. In another sense, these population centers may be best positioned to utilize hydrogen for heating and cooling, especially in New York, where district-scale infrastructure is already in place.

For those that do not receive H2Hub program funding, all is not lost.

Through the H2Hubs program, DOE expects to fund 6 to 8 hubs – at best, a third of the hub proposals detailed here. But alternative sources of support are available to those that don’t make the final cut. H2hubs proposals could be modified to align with other funding opportunities from the IIJA, including programs for clean hydrogen manufacturing and recycling, transportation charging and fueling infrastructure, and energy storage demonstration pilots. Beyond these opportunities, hub proposals could also be used to pursue private funding. Most importantly, hub proposals are still useful even if they cannot secure an immediate pathway to fruition because the ultimate goal is a national hydrogen network and economy. As synthesized resource plans, hub proposals not funded in the near future could become important make-ready blueprints for expanding the national hydrogen network and market as the six to eight funded hubs establish steady operations.

H2Hub proposals provide some early insight—and indicate there is a lot left to do.

H2Hub proposals illuminate some important patterns about what is known, but they also underscore what is not known. For hub hopefuls like Georgia, at the earliest stages of proposal development, the basic hub architecture is not yet clear. Among those that have made more progress, important details are still not fleshed out, at least publicly. They include information about expected production capacity, requirements for new infrastructure, workforce opportunities, and timelines to actually produce and utilize hydrogen.

The H2Hubs program sets the stage for a U.S. hydrogen built upon different sources and a variety of end-uses. Hub proposals reflect these goals, but they also demonstrate strategic attention to particular regional strengths and common preferences among hub actors as they identify opportunities. This is a good thing—it should help ensure the success of the H2Hubs program, support the long-term self-sufficiency of funded hubs, and accelerate the development of a national hydrogen economy.

Energy and Sustainability , and Energy and Geopolitics