In April 2017, Russia unveiled an Arctic Trefoil military base on Alexandra Land Island in the northeast Barents Sea. It is Russia’s northernmost military outpost and the second of its kind, following the completed Northern Clover on Kotelny. Alexandra Land is also home to the upgraded Nagurskoye Airbase. Rather than ensuring these new Arctic bases remain secret, the Russian government is encouraging virtual tours of its state-of-the-art, clover-like compound, which is designed to withstand severe weather. Russia’s military posture on Alexandra Land provides air, sea, and land capabilities to reinforce Russia’s multilayered maritime and air denial capabilities; safeguard the Kola Peninsula, which is home to the Northern Fleet’s headquarters and Russia’s advanced Arctic land, air, and naval assets, including its nuclear arsenal and second-strike capabilities; and ensure Russia’s access to and control over the Northern Sea Route (NSR). Geographically, Alexandra Land’s proximity to the Greenland-Iceland-Norway (GIN) and Greenland-Iceland-United Kingdom (GIUK) gaps and its increased capabilities could disrupt NATO’s vital sea lines of communication (SLOC) between North America and Europe, hindering U.S. military reinforcement to Europe.

Alexandra Land Island (Ostrov Zemlya Aleksandry) is the largest island in Russia’s Franz Josef Land Archipelago (Zemlya Frantsa-Iosifa), and its strategic importance to Russia’s national defense and presence in the Arctic dates back to the early-1950s.1 During the Cold War, the former Soviet Union established and maintained the Nagurskoye Airbase—which included the 31st Separate Radar Company, a meteorological station, a small dirt/ snow airfield (known as the Nagurskoye Snow Strip), and likely small signal and communication intelligence collection units. Following the collapse of the Soviet Union, these facilities were substantially reduced to a “FSB [Federal Security Service] border post (30 persons), Arctic specialists (16 persons) and meteorologists (six persons)” who lived and work there.2

An important shift in Russia’s military doctrine in 2008, which elevated the strategic importance of the Arctic, revived Alexandra Land’s importance to the Kremlin. The reconstitution of the Nagurskoye airbase and construction of new facilities better secures northern approaches to Russia’s coastline, protects its vast mineral and energy resources, and improves monitoring of maritime shipping activity across the NSR. President Putin personally visited Franz Josef Land in April 2010 following a maritime border demarcation agreement in the Barents Sea between Russia and Norway that paved the way for oil and gas exploration along the maritime border.

In 2013, the Russian Defense Ministry announced intentions to reestablish a regular naval and military presence in the Arctic.3 As part of its plan, the meteorological station on Alexandra Land would be supplemented by permanent military facilities including a new airbase, housing and administration trefoil, air traffic control and air defense units and radars, and other support installations.4 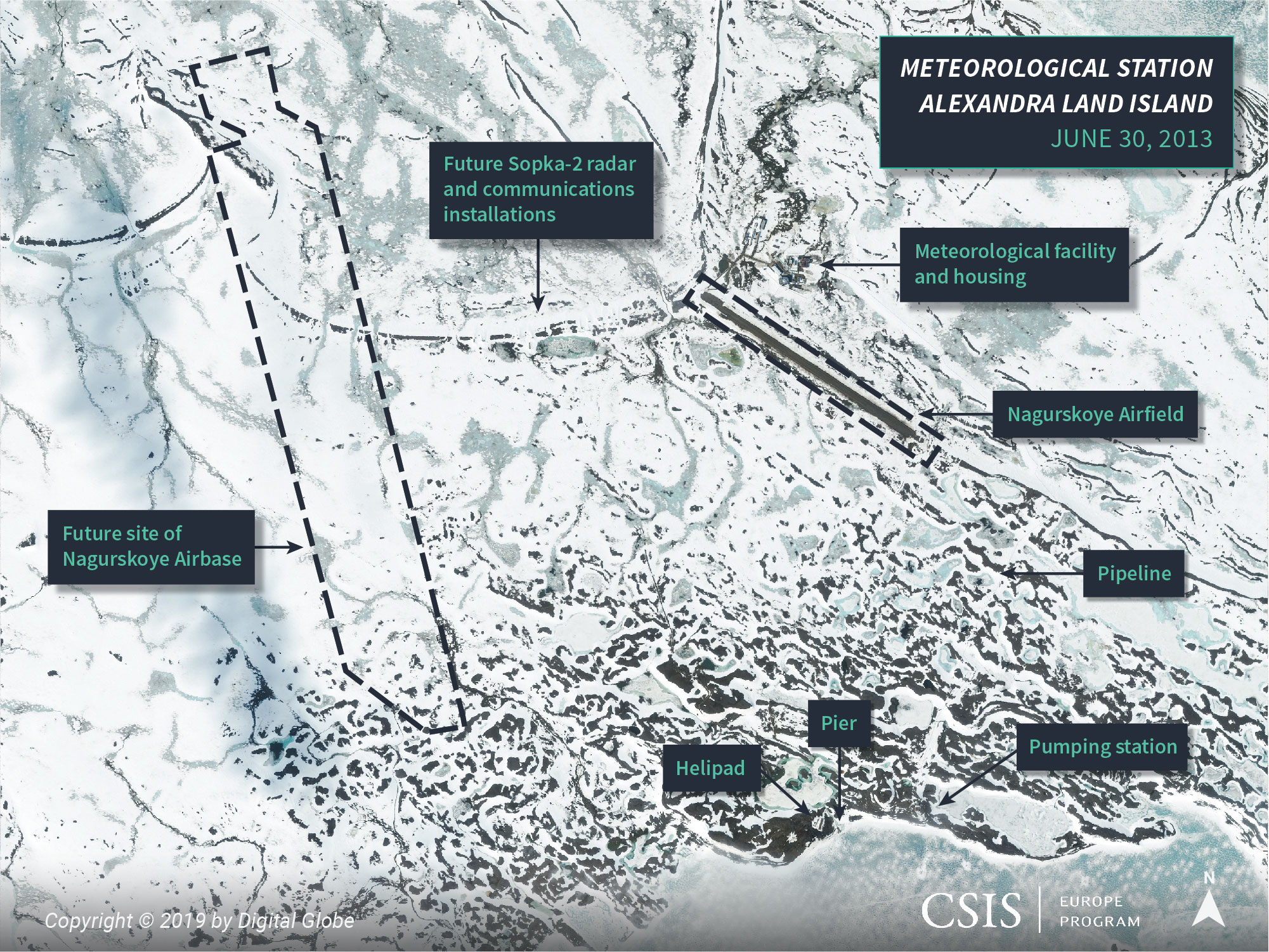 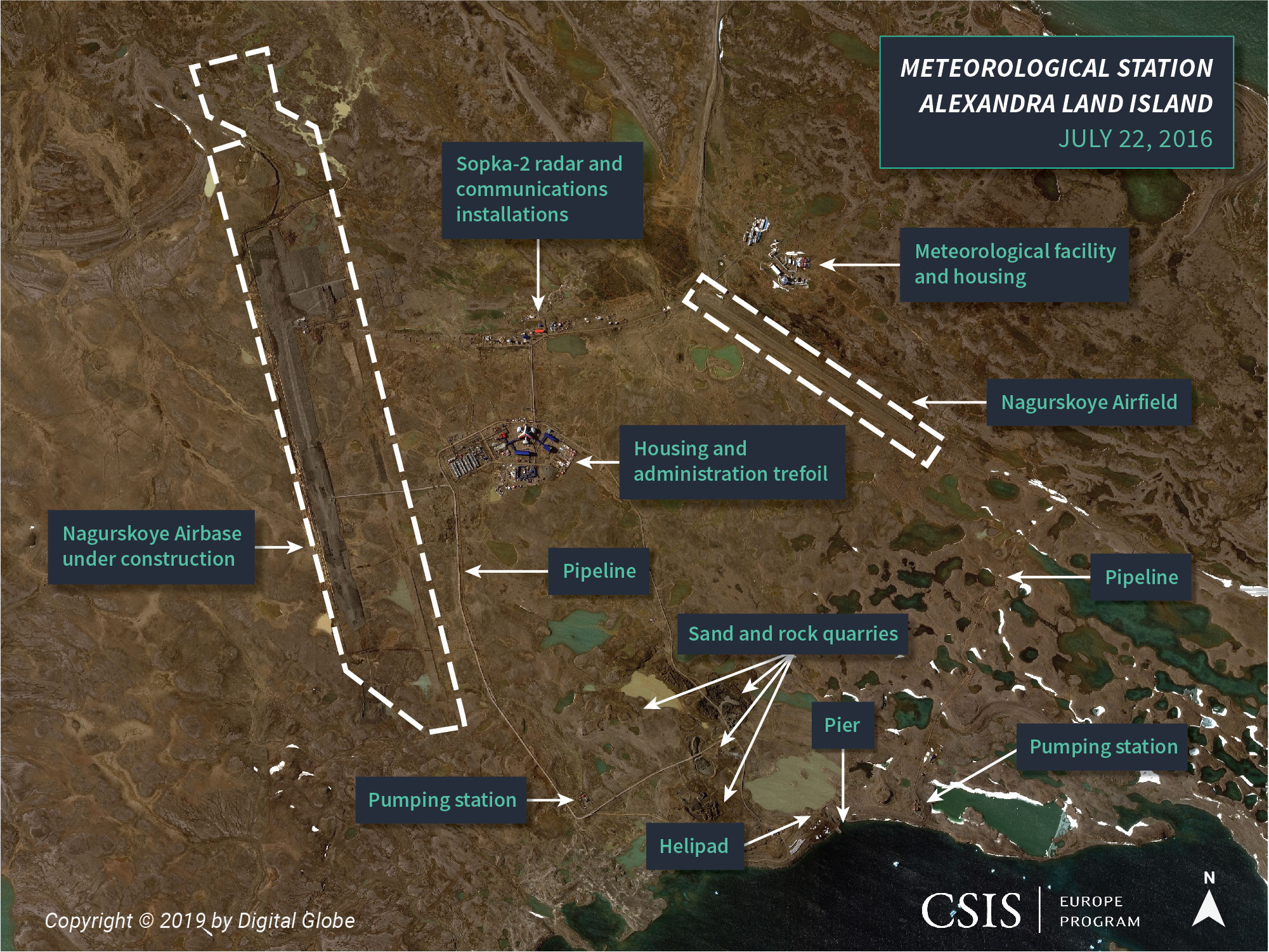 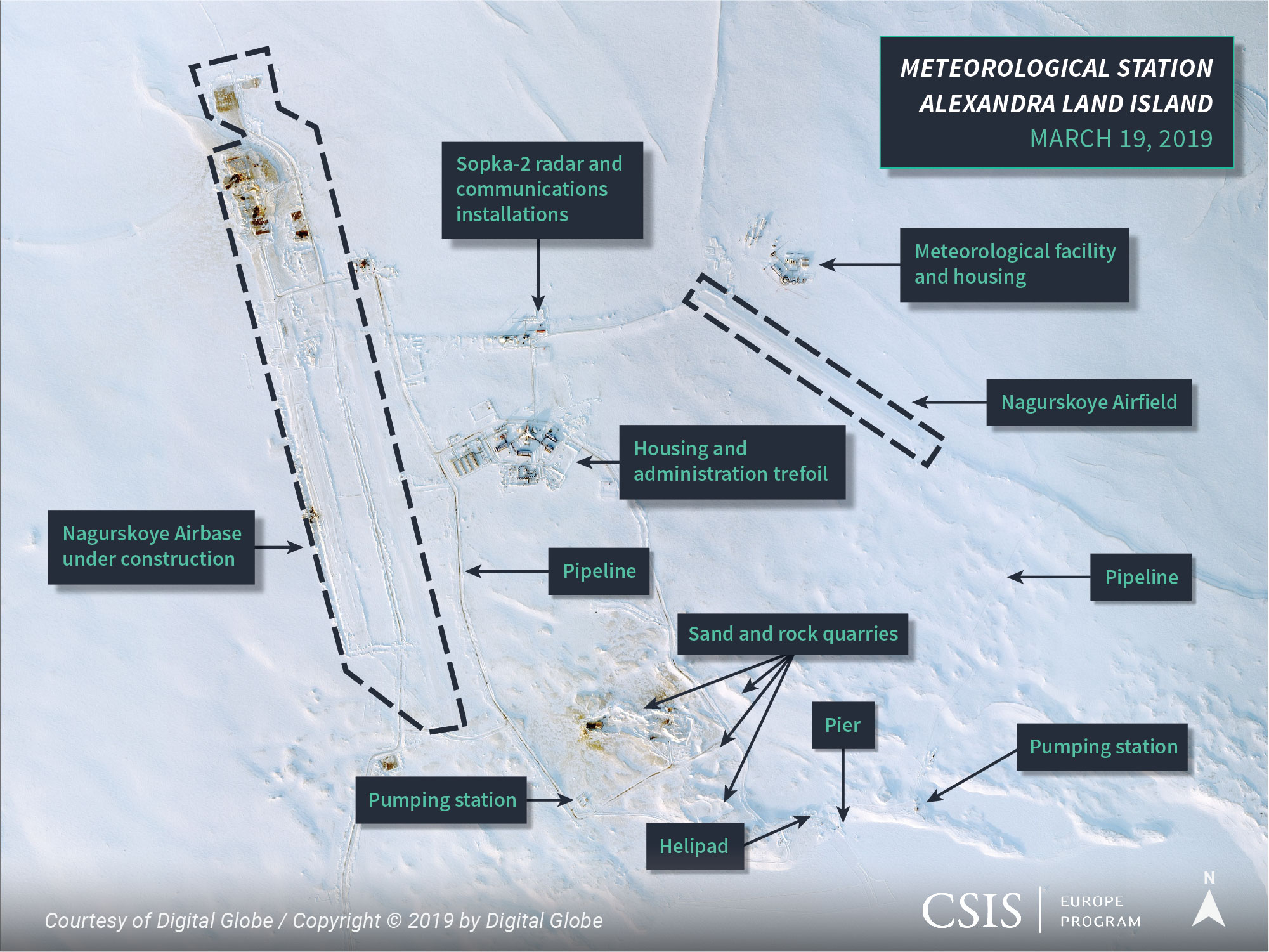 Construction moved quickly, and in November 2014 units of the Northern Fleet’s air defense division deployed to Alexandra Land and were housed in a temporary camp.5 The following month, construction of the housing and administration trefoil began. In October 2015, Northern Fleet Commander Admiral Vladimir Korolev stated that construction of the trefoil was 60 percent completed.6 By the fall of 2016, the trefoil compound was completed.7 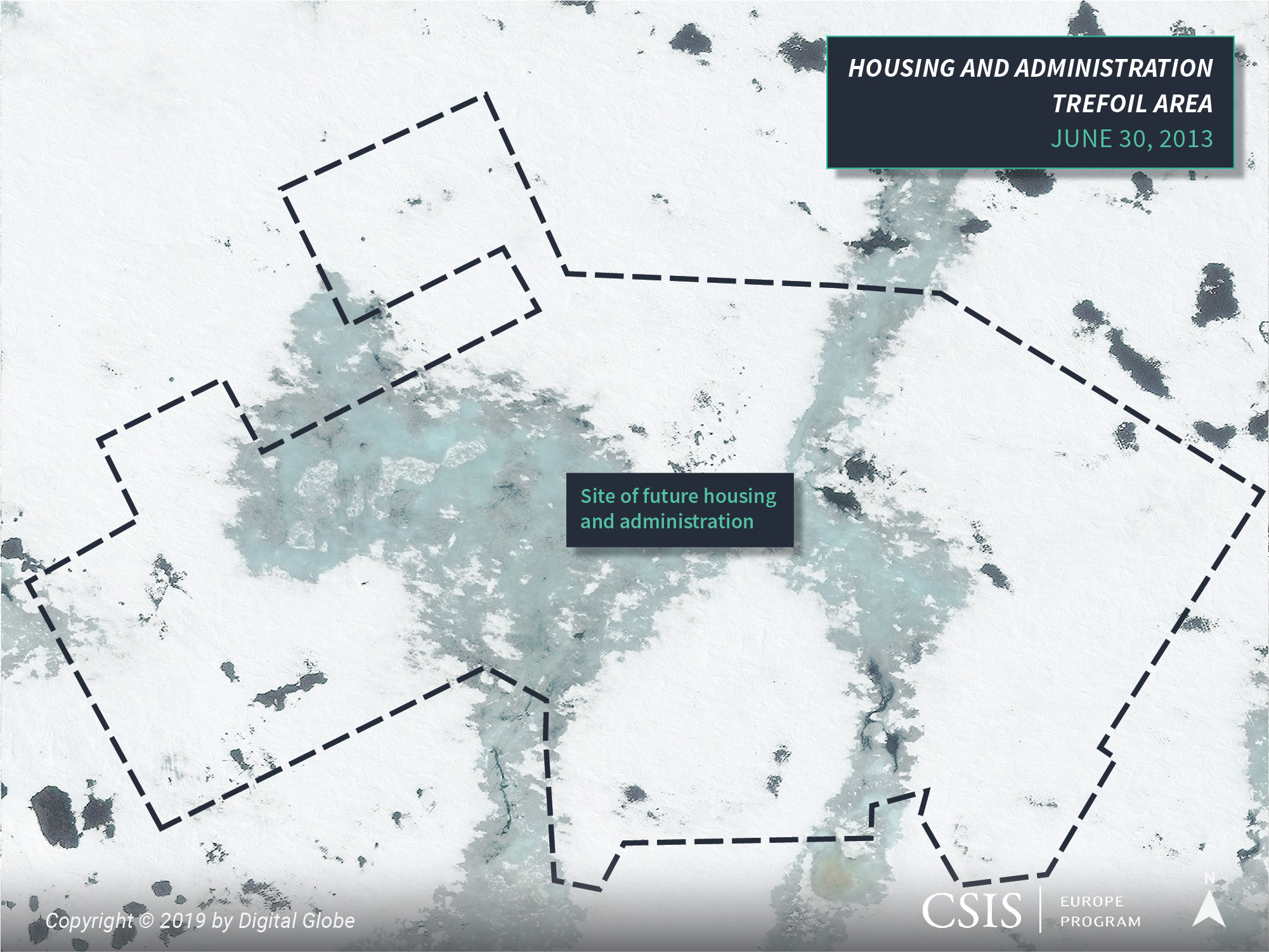 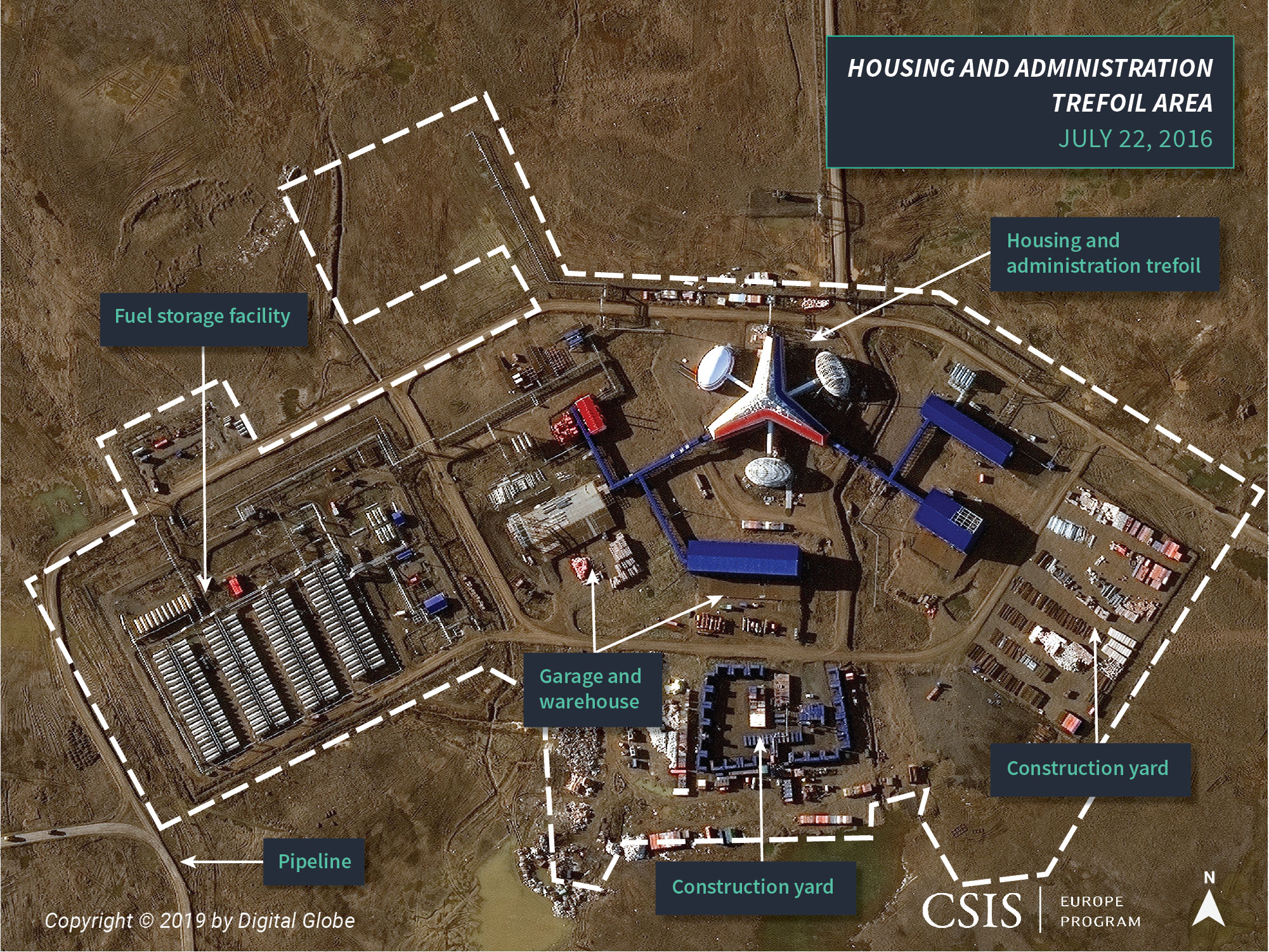 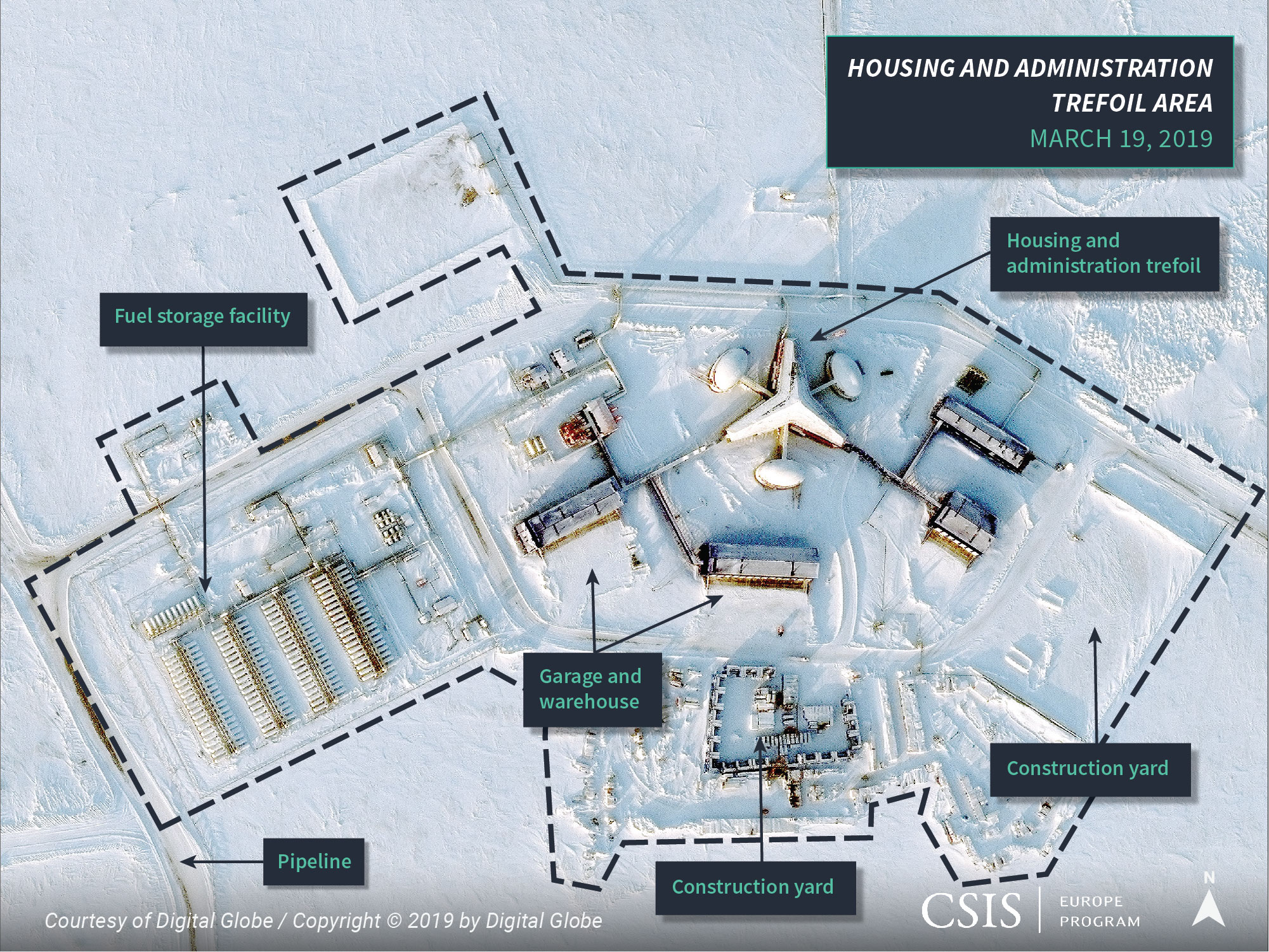 In April 2015, it was announced that a new 2,500-meter- long “temporary seasonal airfield covered with ice” would be constructed on Alexandra Land to accept delivery of personnel and cargo.8 The following year, it was announced that this new airfield would be extended to a “Class 2 year-round runway [and would] have dimensions of 2.5-kilometers-by-42-meters” and be completed by the end of 2016.9 That same month, Russian Defense Minister Sergei Shoigu announced that a group of either Su-34 multirole fighter aircraft or MiG-31 fighters would be based at the new Nagurskoye Airbase, alongside Il-78 tankers.10 When completed, the airbase and air units would consist of heated hangars for Su-34 or MiG-31 aircraft, an aviation headquarters, a separate radar company, an air traffic control facility, an antiaircraft artillery battalion, and communications and support subunits. Nagurskoye Airbase would be capable of receiving and basing all types of aircraft, including strategic bombers, and defending itself.11 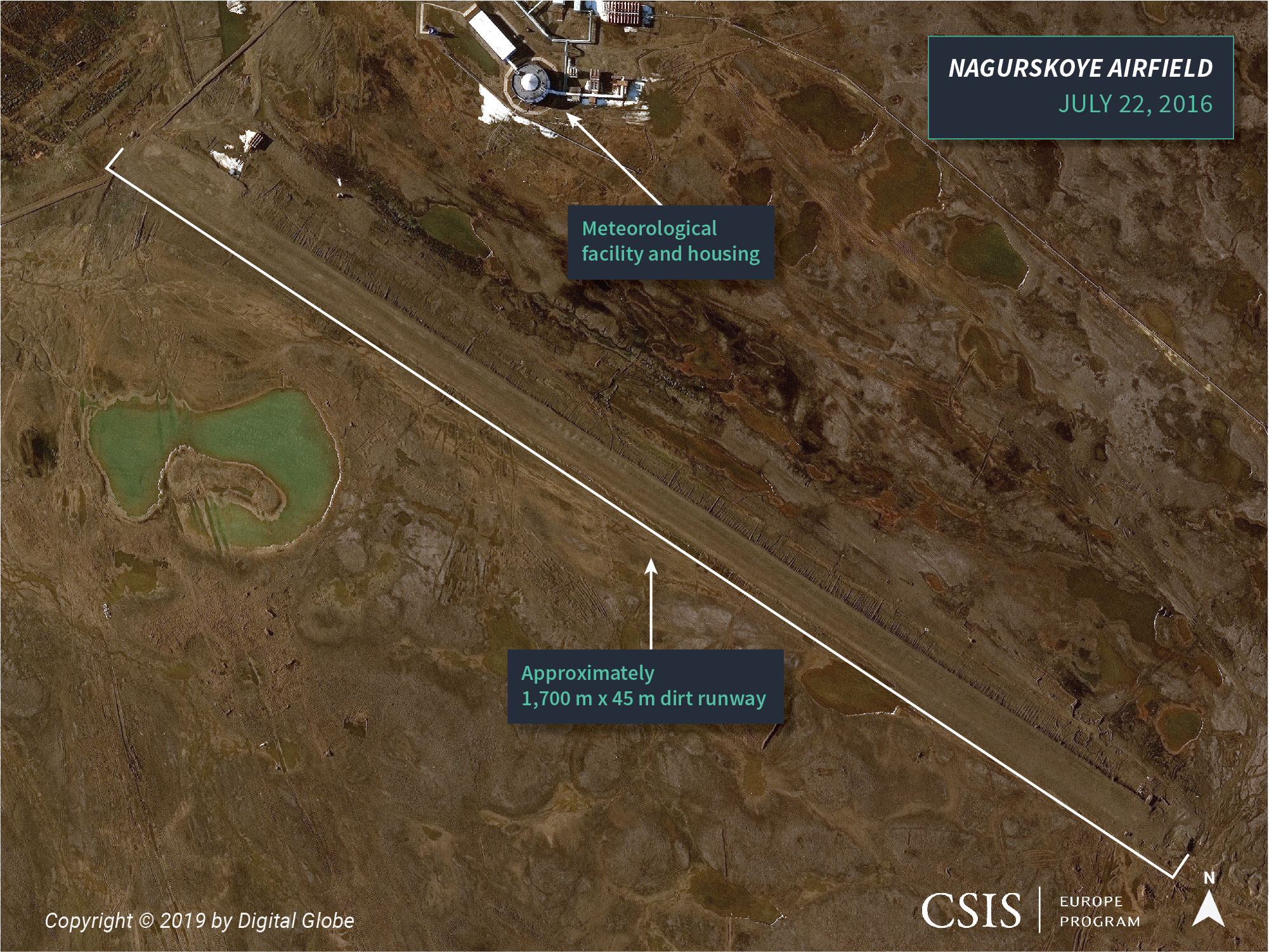 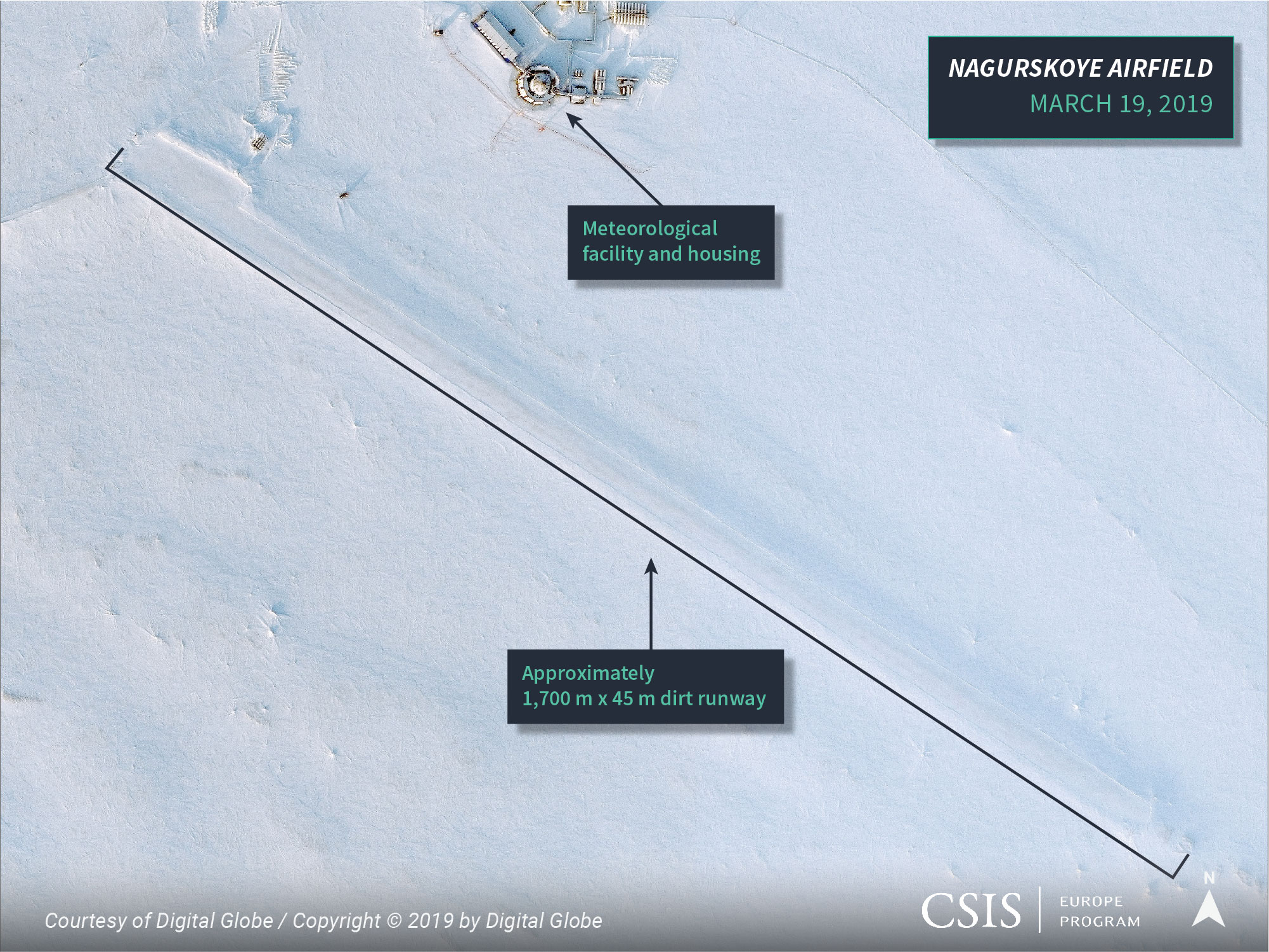 With the upgrade to Nagurskoye Airbase, Russia has established a new air defense division in the Arctic that includes the units on Franz Josef Land (to include Alexan nd Island) and units on Novaya Zemlya, Severn mlya, the New Siberian Islands, Cape Schmidt, Wrangel Island, and Tiksi, covering an area of approximately 4,800 km.12

Alexandra Land’s location advances two Russian objectives in the Arctic: (1) it enhances Russian territorial defense and (2) improves monitoring and control over maritime activity across the NSR. As its northernmost military installation, Alexandra Land pushes Russia’s military and forward line of defense further north into the Arctic Ocean, making it a key outpost to observe NATO activity and capabilities. Considering that the four other Arctic coastal states are NATO members, Alexandra Land effectively represents a marker, stymieing what Russia may interpret as NATO expansion in the region. The Sopka-2 radar system improves Russian air and maritime domain awareness in the Arctic and supplements Russia’s strategic early- warning radar network to detect U.S. or NATO aircraft and missiles when “flying over the top.” Similar to the Sopka-2 radar installation on Wrangel Island, Alexandra Land is part of a larger network covering Russia’s northern border in the form of a “protective dome” against foreign aircraft, missiles, and ships. 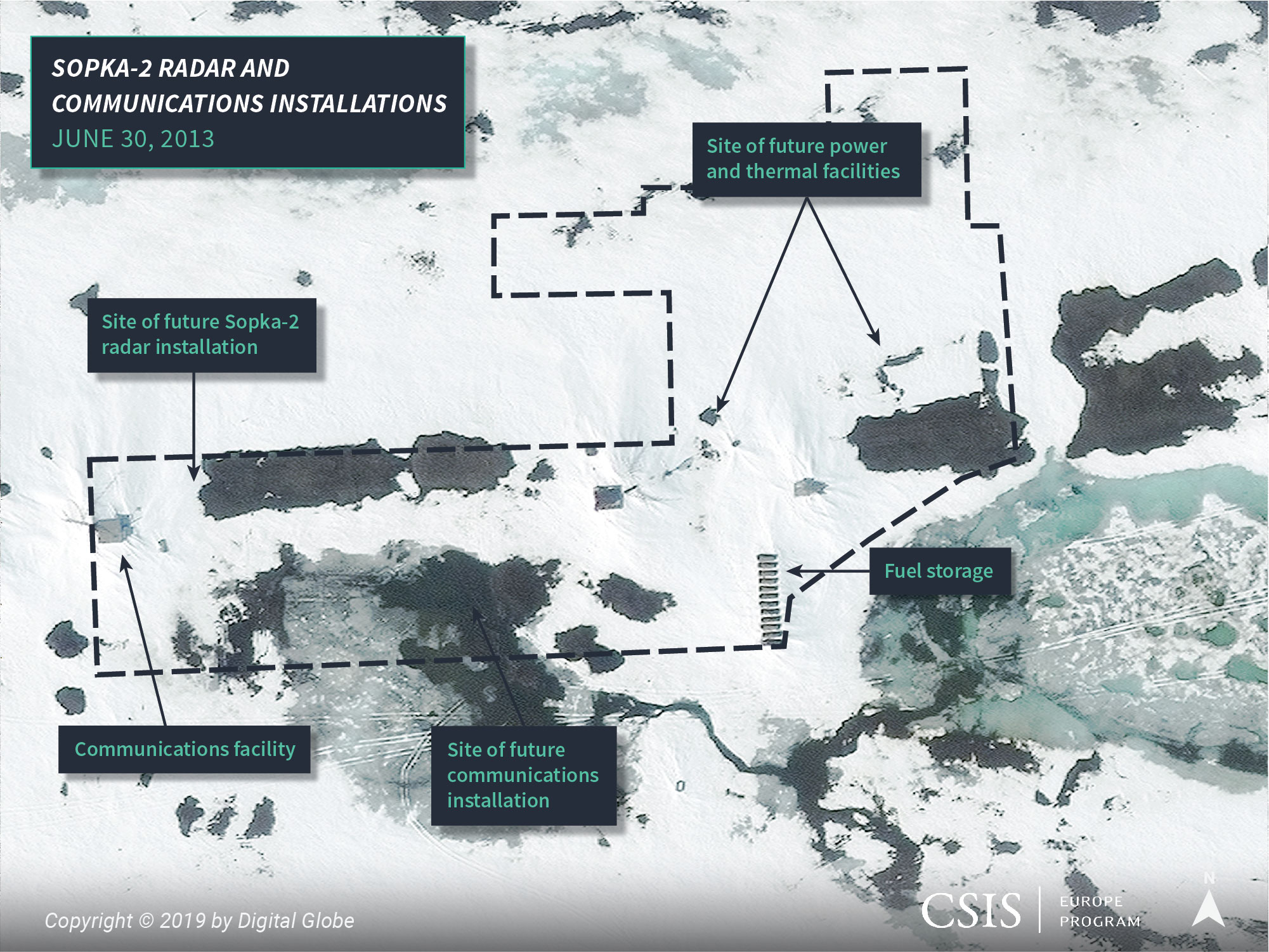 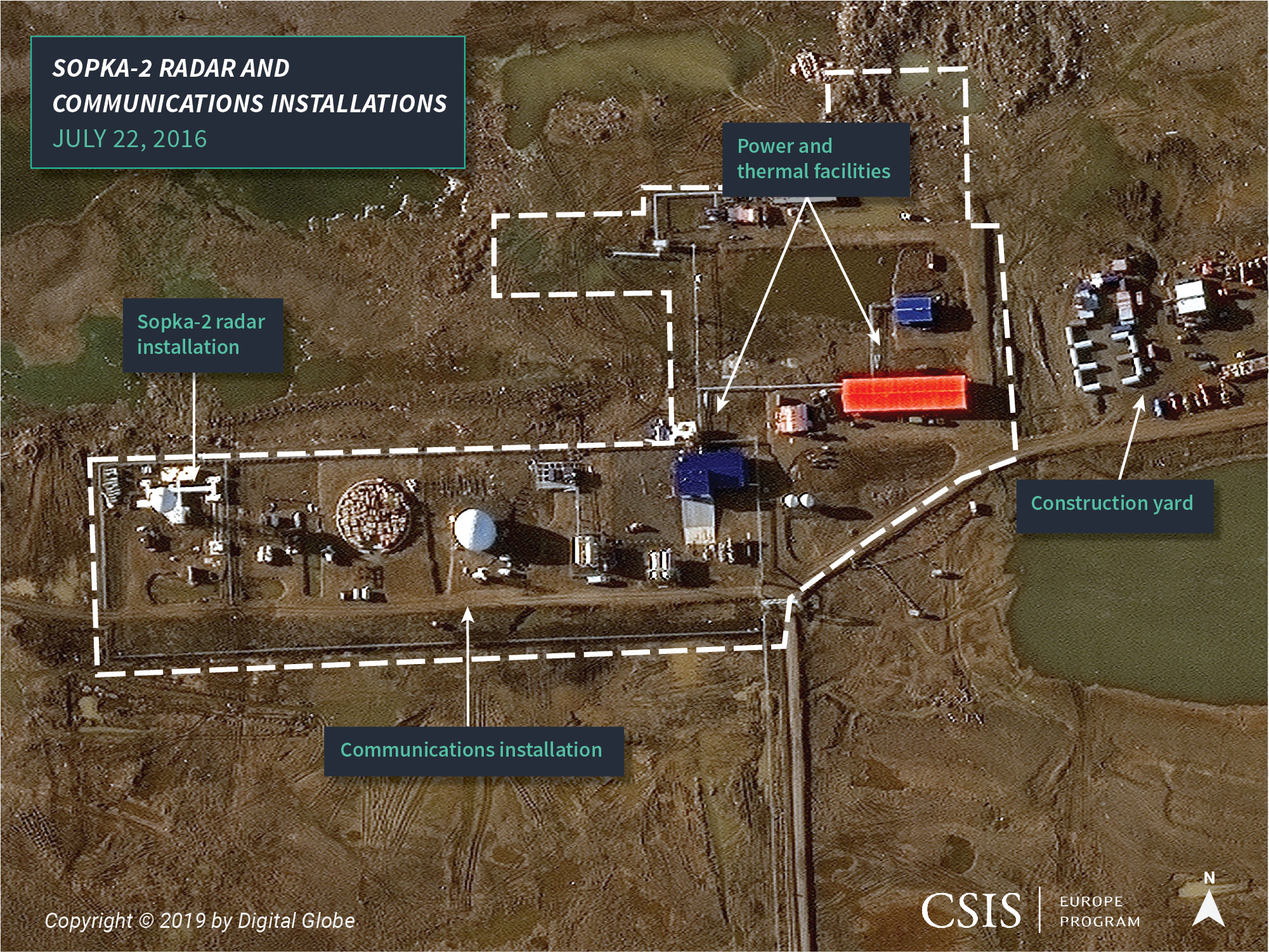 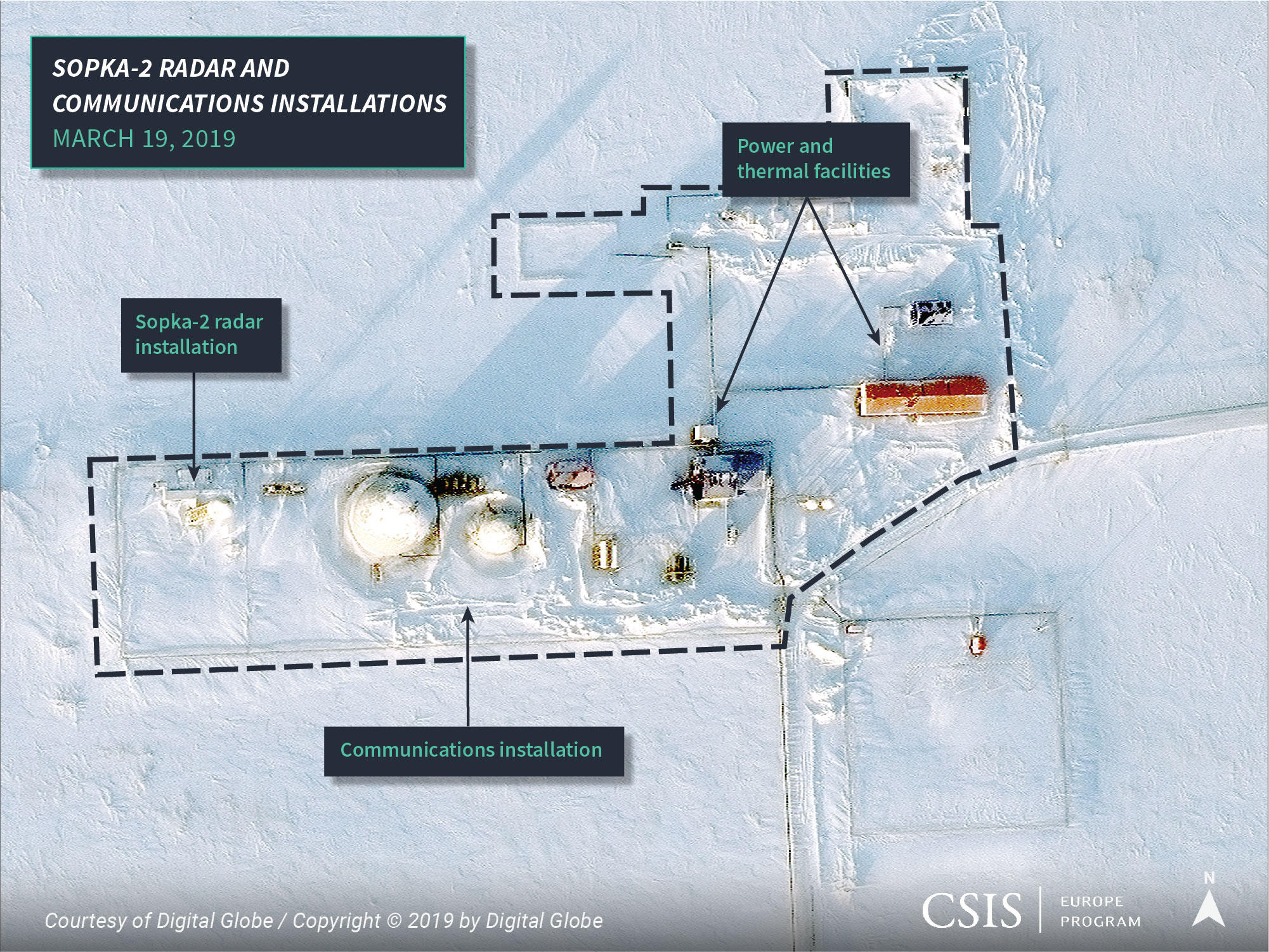 Alexandra Land is also situated along the NSR. In anticipation of increased maritime activity, the Russian government increasingly seeks to enhance its surveillance, enforcement, and defensive capabilities along the route. There are also growing concerns about potential military activity. In March, the Russian government imposed limits on foreign warships transiting the NSR, requiring 45 days notice for voyages. This new limitation runs counter to international maritime law, as the majority of the international community views the NSR as an international passage, meaning freedom of navigation should be permitted, although it is rarely tested in the Arctic. This is a concerning development that could hinder the conduct of “innocent passage” through the NSR.13

DEFENDING AGAINST “OVER THE TOP” THREATS

In June, displaying its growing military strength in the Arctic, Russia’s Northern Fleet tested the Tor-M2DT missile system, with a missile range of 15 kilometers. According to reports, the Tor-M2DT is likely to be deployed to several remote military installations, including Franz Josef Land. Tests of the new system follow reports of past deployments of notable air defense assets including the S-300 (NATO: SA-10 Grumble) air defense system and the Pantsir-S1 anti-aircraft system. Complimented by the rumored presence of K-300P Bastion-P (NATO SSC-5) coastal defense systems armed with P-800 Oniks anti-ship cruise missiles (NATO: SS-N-26 strobile) and 4K51 Rubezh (NATO: SSC-3 Styx) anti-ship system, Alexandra Land would be a center point of a developing anti-access/area denial (A2/AD) bubble extending into the international waters of the Central Arctic Ocean and Barents Sea. However, none of the satellite images analyzed capture such equipment.

. . . BUT WE CAN SPECULATE ABOUT POWER PROJECTION SCENARIOS

While Alexandra Land’s primary function is to enhance Russian air and coastal defense, the growing military capabilities on Nagurskoye Airbase suggest that Alexandra Land could be a staging location for future offensive and power projection capabilities. Following the upgrades in 2016 to a “Class 2 year-round runway,” Nagurskoye Airbase is now capable of hosting fighter and refueling aircraft, notably Su-34 and MiG-31 fighter jets and Il-78 refueling tankers. Based on a 2018 Danish Intelligence Risk Assessment, Russian aircraft based at Nagurskoye Airbase are capable of reaching the airspace over northeastern Greenland with little prior warning. Supported by air-to-air refueling, Russian combat aircraft could reach Thule Air Base, a key installation in the U.S. space and missile defense architecture, while simultaneously enlarging Russia’s A2/AD bubble into the North Atlantic.15 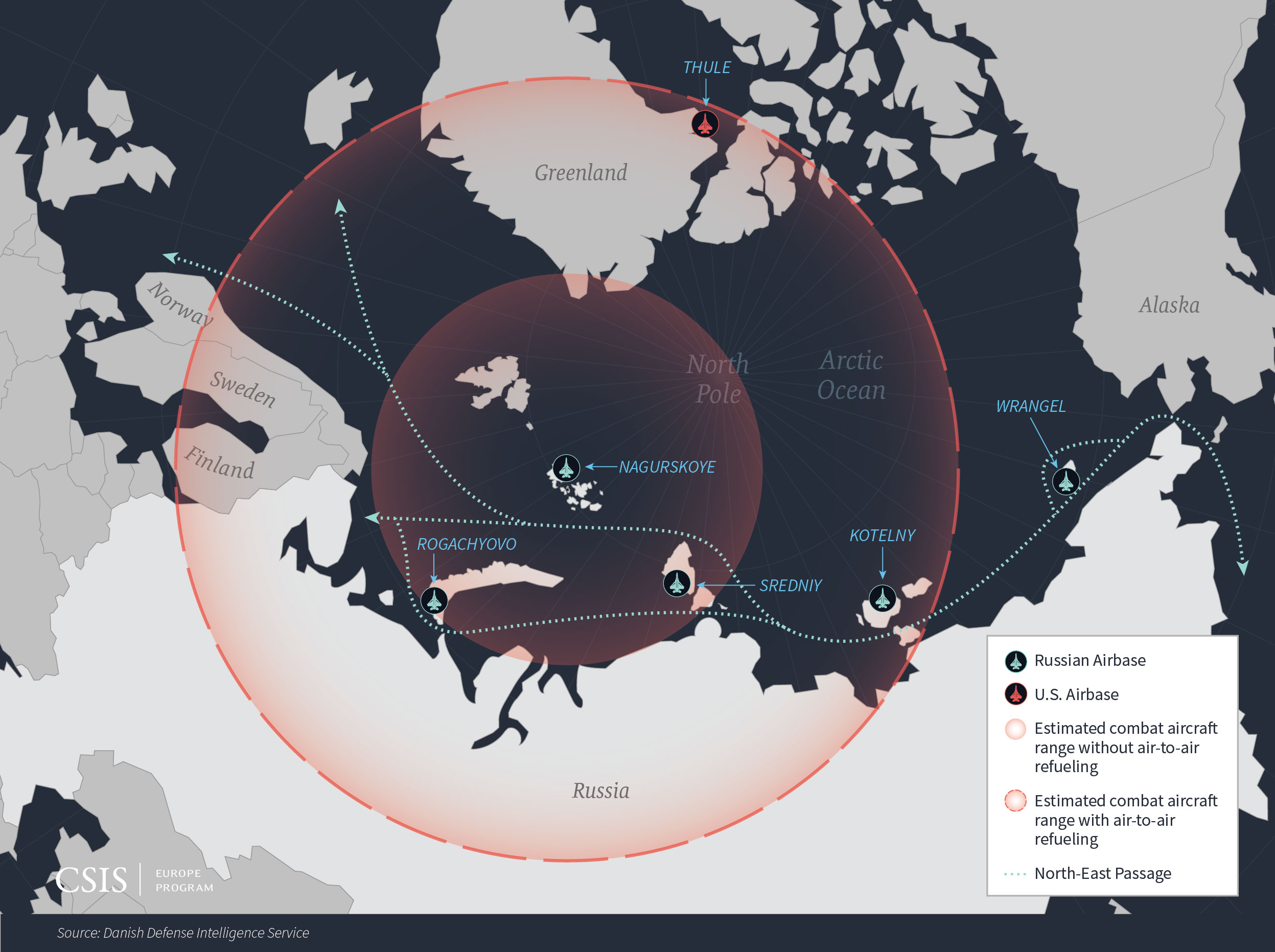 The size and scale of recent Russian exercises in the Barents and Norwegian Seas suggests that Russia seeks to practice and test its expanding defense capabilities in the North Atlantic. In August, the Northern Fleet completed a comprehensive naval aviation exercise involving more than 50 aircraft, including fighter jets, bombers, Tu-142 anti-submarine planes, Il-38s, and MiG-31, Su- 33, and Su-24 fighter jets in addition to nearly 2,000 ground personnel. The maritime component of the drill included 30 Russian naval vessels, including surface ships, submarines, and supply ships. Norwegian Chief of Defense Haakon Bruun-Hanssen suggested these are exercises designed to block NATO’s access to the Baltic Sea, North Sea, and Norwegian Sea, hindering NATO reinforcements to Norway. Importantly, Russian forces for this exercise emanated from Russia’s Northern, Baltic, and Black Sea fleets, suggesting that NATO should reconceptualize its understanding of how Russia will defend the Arctic and what resources NATO would draw upon to defend its allies in the face of offensive measures.

Alexandra Land and Nagurskoye Airbase increase Russia’s air and maritime defense capabilities in the Arctic. The most concerning aspect, however, is Alexandra Land’s potential as a staging ground for power projection into the Central Arctic and North Atlantic. The Trefoil compound and its support facilities raise the level of readiness of Russia’s Arctic forces potentially to the point where Norway’s freedom of action and movement is restricted and potential Allied access to the North Atlantic is cut off. Sending NATO reinforcements to defend Norway would prove challenging, and NATO’s freedom of navigation in the Arctic could be reduced.16 At the moment, however, the satellite imagery does not indicate such an expansion of capabilities is occurring.

Future Russian military exercises should provide greater insight into new Russian Arctic capabilities, as well as Alexandra Land’s role in Russia’s bastion defense. There are reports of significant quantities of deliveries to Franz Josef Land prior to Tsentr. The United States and NATO must closely monitor and analyze the Tsentr exercise to examine shifts in and changes to Russia’s Arctic military posture.

*During World War II, the Germans maintained a secret weather station on Alexandra Land named Schatzgräber or “Treasure Hunter.” Remains of the facility were unearthed by Russian scientists in 2016.