'The Ice Curtain: Bringing Transparency to the Arctic is an ongoing collaborative series between the CSIS Europe Program and NGA.

In the past, Russian bases were closed to outside observers, but the Russian government appears eager to show the international community its modern air defense infrastructure and capabilities prior to Russia’s annualInternational Arctic Forum. In addition to Temp Airbase, Kotelny is equipped with a state-of-the-art trefoil military compound; communications and Sopka-2 radar facilities; and pads for radar, command and control, and missile launch vehicles. Kotelny is a central element in Russia’s growing network of Arctic islands that create a protective dome around its coastline and includes key outposts, such as Wrangel Island. Along with active Russian sub-surface vessels, new anti- air and anti-ship capabilities on Kotelny represent a robust anti-access/area denial (A2/AD) bubble in the Arctic, which could limit the North Atlantic Treaty Organization (NATO) and U.S. air and maritime capabilities in the region.

During the Cold War, Moscow maintained a military observation post and radar station on Kotelny but it, along with other derelict Arctic outposts, was largely abandoned after the dissolution of the Soviet Union. But in 2013, the Russian Defense Ministry announced that it was redeveloping Kotelny Island as part of a larger effort to reestablish a regular naval presence in the Arctic. Increased maritime patrols would safeguard Russia’s territorial waters and extensive Arctic coastline, protect mineral and energy resources, and monitor shipping along the Northern Sea Route. Principal among these naval assets is its Northern Fleet, the Kremlin’s most visible and powerful fleet in the Arctic, which includes its sea- based nuclear deterrent and sub-surface vessels that now increasingly patrol the region and more specifically the North Atlantic.

The Kremlin has also enhanced its naval aviation assets in the region and is actively exercising its new Arctic capabilities, flying over 100 Arctic sorties in 2018 of reconnaissance, maritime patrol, and anti-submarine aircraft. The Northern Fleet’s air and air defense units engaged in 2,700 firing exercises including 51 missile launches in 2017, and 148 exercises in 2018 accompanied by 157 rocket launches. These exercises increasingly rehearse Russia’s complex and combined operations while testing its ability to mobilize rapidly to defend its Arctic coastline. It is for these reasons that Russia’s growing toolkit of integrated air and missile defense assets in the Arctic to include the deployment of the Bastion-P coastal defense system equipped with supersonic P-800 Oniks/Yakhont anti-ship cruise missiles must be assessed for its defense implications to the United States and NATO.

The 15 satellite images examined between 2013-2019, show a concerted program was undertaken since 2014 to construct at least eight—and potentially as many as eleven—specialized weapons pads along the Kotelny coastline and at Temp Airbase. These weapons pads are used by radar, command and control and missile launch vehicles and are uniquely pyramidal in shape, elevated above the tundra for drainage and stability. These pads vary in size and are now being used to support the Bastion-P coastal defense missile system and other air and coastal defense missile systems. Only those satellite images dating from September 2018 show direct evidence of the deployment of the Bastion-P on Kotelny Island, which corroborates Russian reporting of the system’s delivery to the island at that time. This construction effort indicates a logical and well- planned Russian project over the past five years to develop air and maritime defenses on an important Arctic island base. 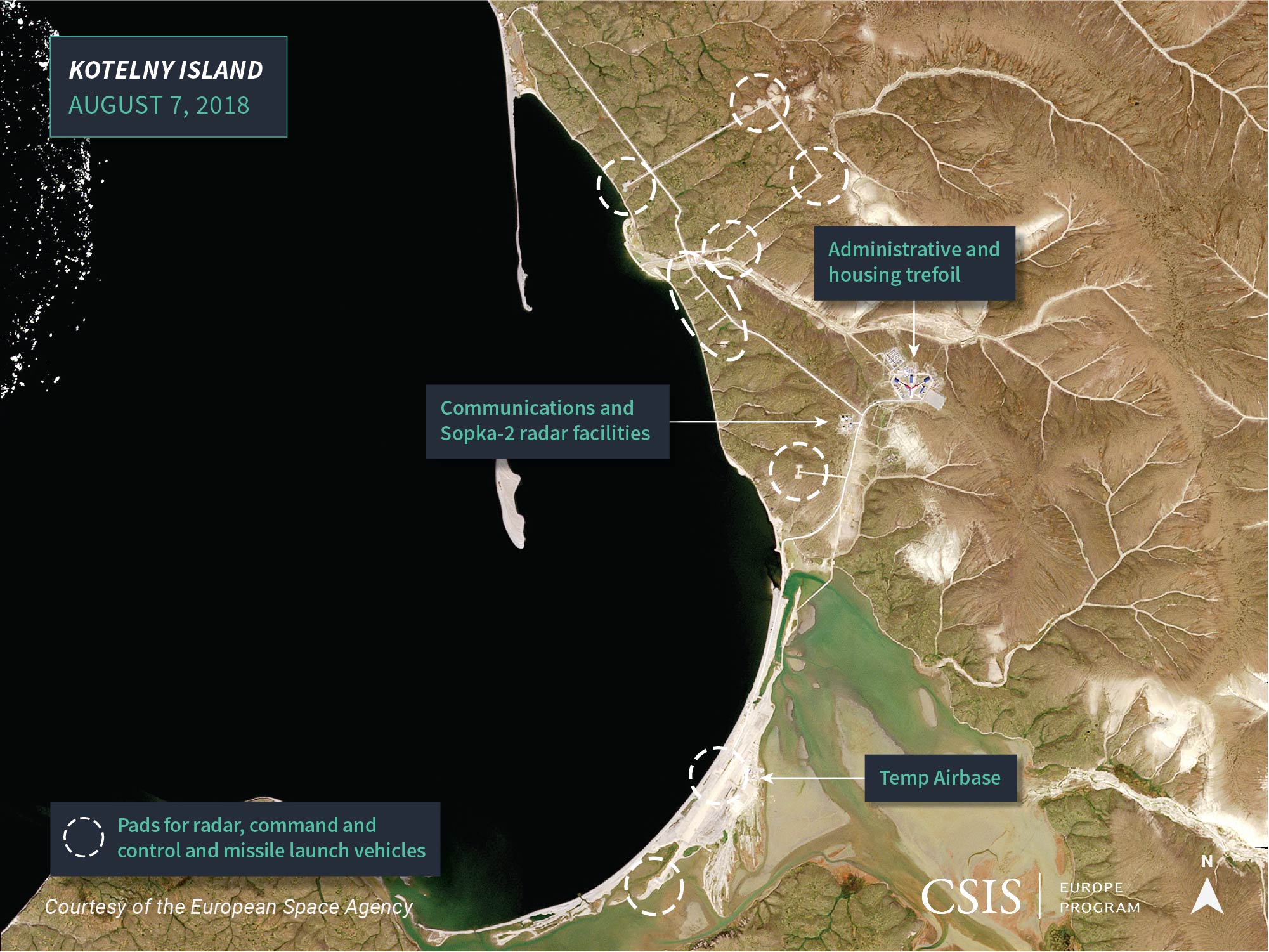 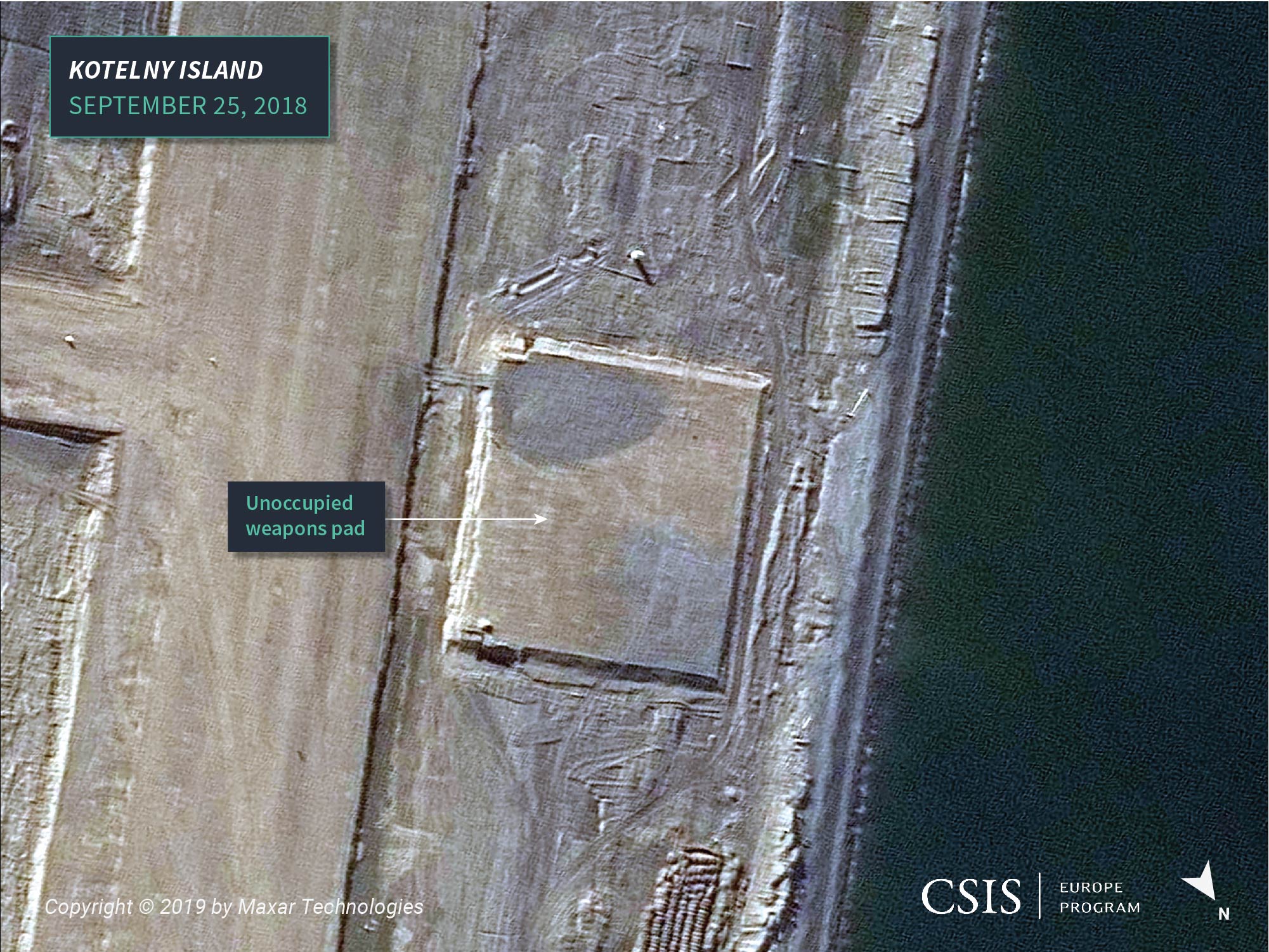 WHY THE KOTELNY BASTION-P DEPLOYMENT IS IMPORTANT

Two Bastion-P TELs subsequently took part in a live- firing exercise on September 26, 2018 as part of the larger Vostok-2018, considered the largest Russian military exercise since the end of the Cold War.3 It was also the first known live-fire test of the system by the Northern Fleet, which mobilized across the Northern Sea Route (NSR) to participate in the exercises in the Bering Sea and the Sea of Okhotsk. Commander of the Northern Fleet, Admiral Nikolai Yevmenov stated that ". . . the crew of the Bastion coastal missile system successfully carried out missile firing at a naval target position [in the Laptev Sea] at a range of over 60 kilometers to prove its readiness to effectively fulfill combat duty in the Arctic and protect the island area and the sea coast of Russia."4 Both satellite imagery and ground footage released by the Russian Ministry of Defense show that the Bastion-P launchers and a command and control vehicle were positioned on the weapons pad at the southwest end of Temp Airbase for the exercise. 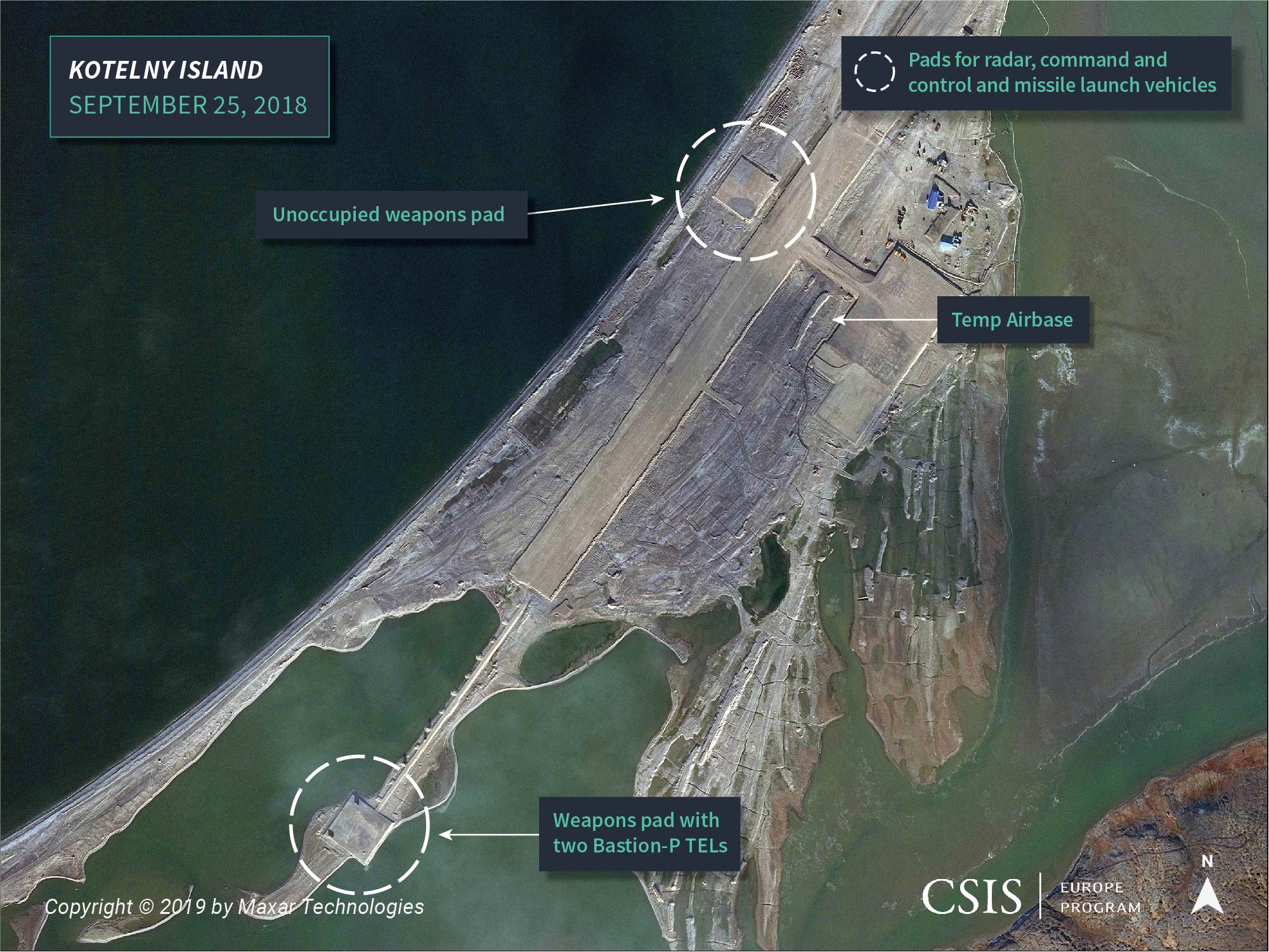 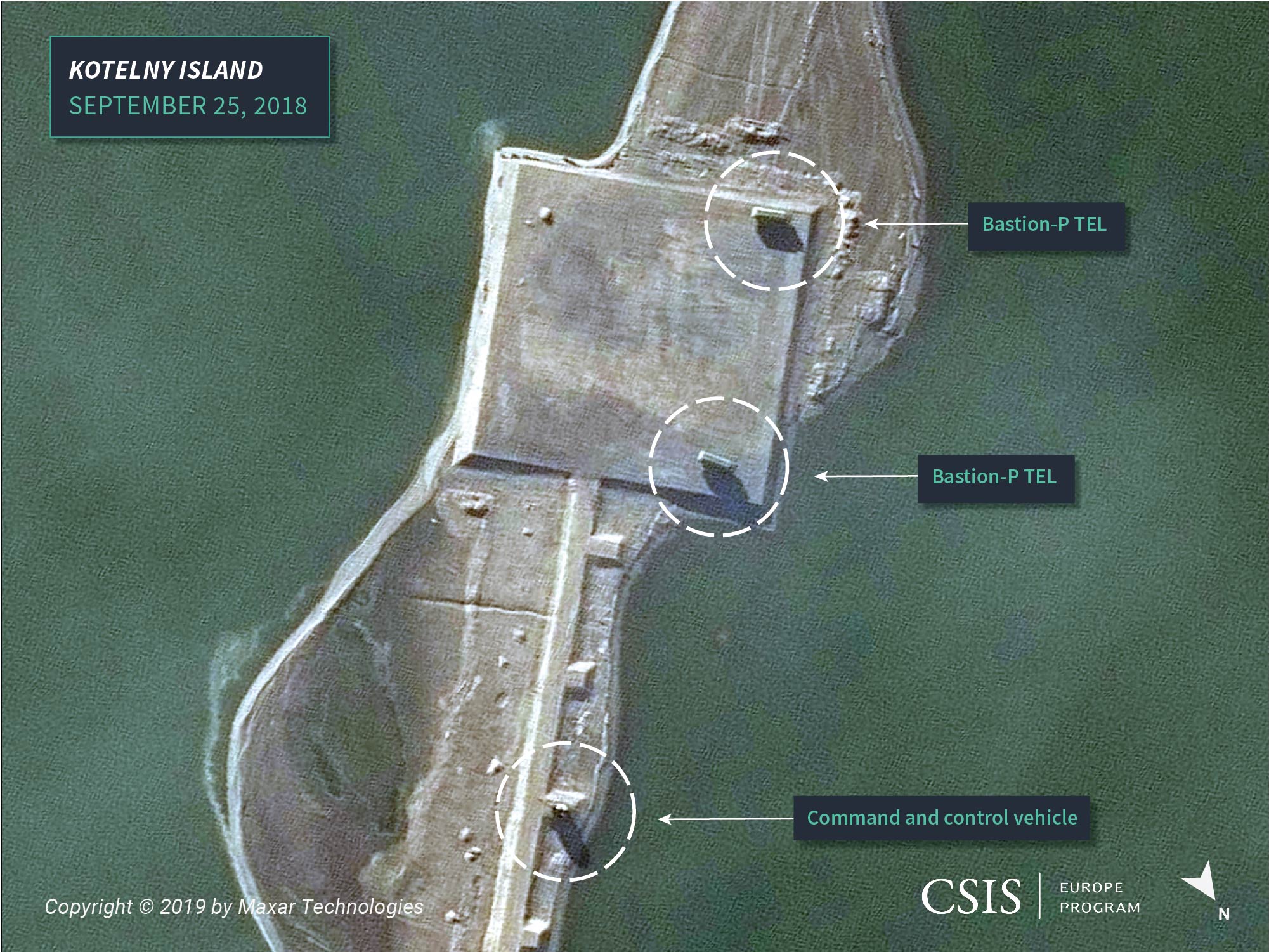 The Bastion-P system is a significant upgrade to Russia’s Arctic coastal defense system. While its range is limited and its location on Kotelny Island poses no immediate threat to the United States or neighboring countries, the Bastion-P system projects Russian sovereignty and territorial jurisdiction over the NSR at a time when the Kremlin actively seeks international investment to develop the route. The creation of more robust capabilities could also be in anticipation of a future Russian assertion of jurisdiction over its proposed extended outer continental shelf claims, which are currently under review by the UN Commission on the Limits of the Continental Shelf. Moreover, these enhanced capabilities protect Russian assertion that the NSR is an internal rather than an international passage. A January statement from Richard Spencer, the U.S. secretary of the Navy, that the U.S. Navy will consider a freedom of navigation operation (FONOP) in the Arctic could be viewed by the Kremlin as justification for a military response. In an ominous and possibly foreshadowing comment, President Putin recently stated that he “wouldn’t like to see the Arctic turning into something like Crimea . . . due to our failure to take timely measures.” 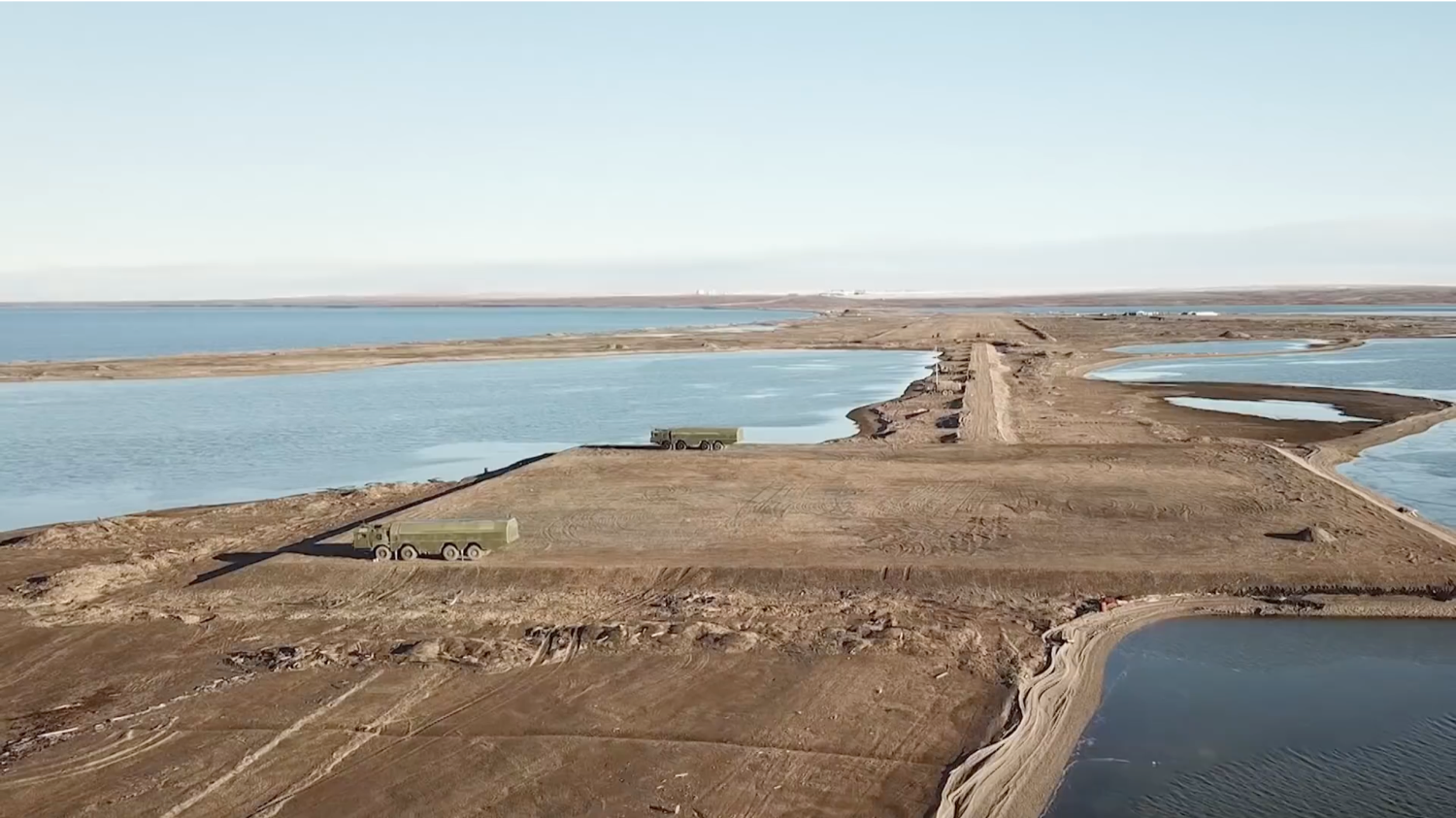 A view looking northeast at the two Bastion-P TELs deployed on the large weapons pad at Temp Airbase for a live-firing exercise. Barely visible a command and control vehicle with its antenna raised in the center of the image. The dirt runway of Temp Airbase is seen in the background, September 26, 2018. (Russian Ministry of Defense). 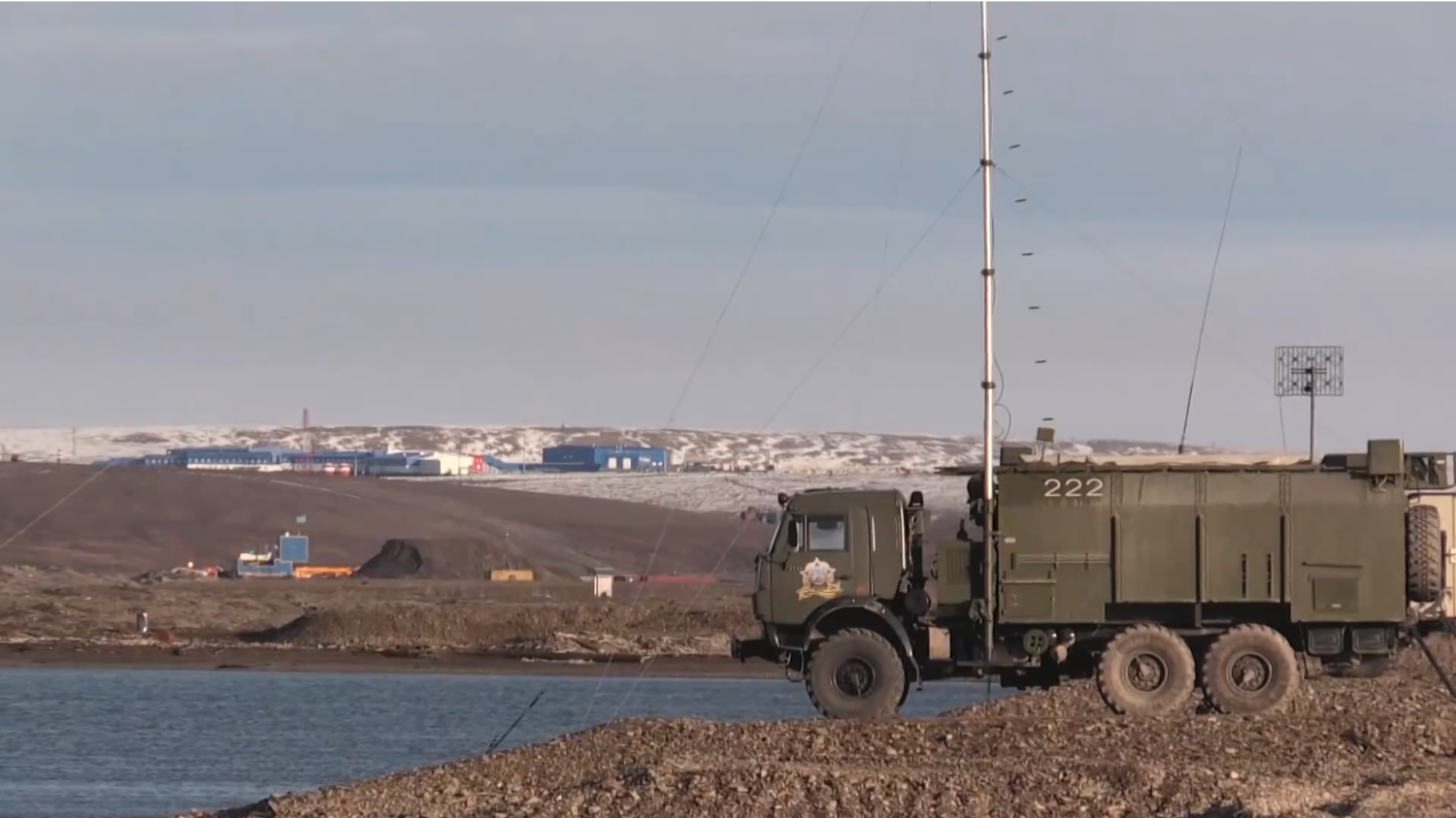 A close-up view of the command and control vehicle with its antenna raised in the center of the image. The administrative and housing trefoil is seen in the background, September 26, 2018 (Russian Ministry of Defense). 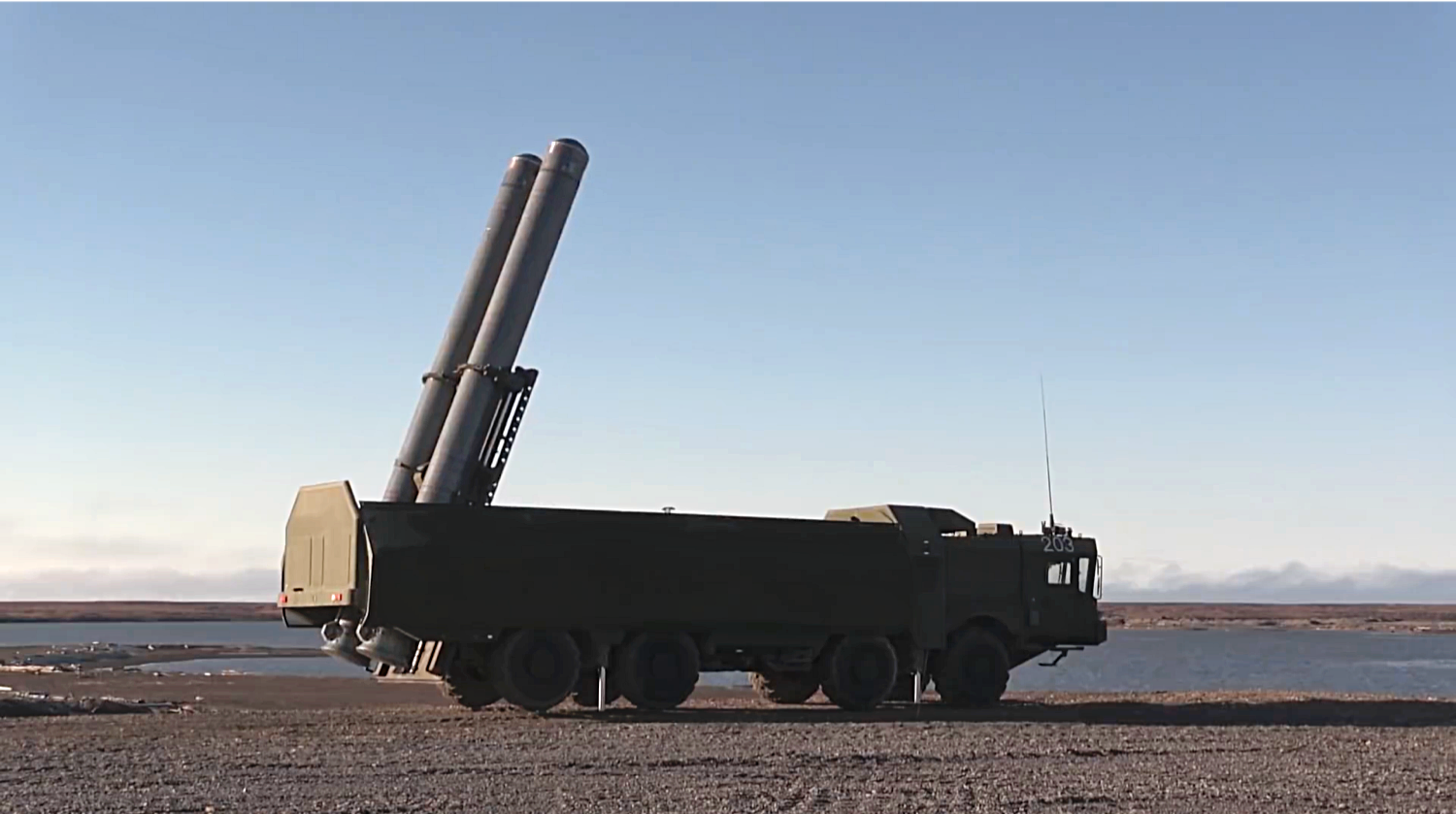 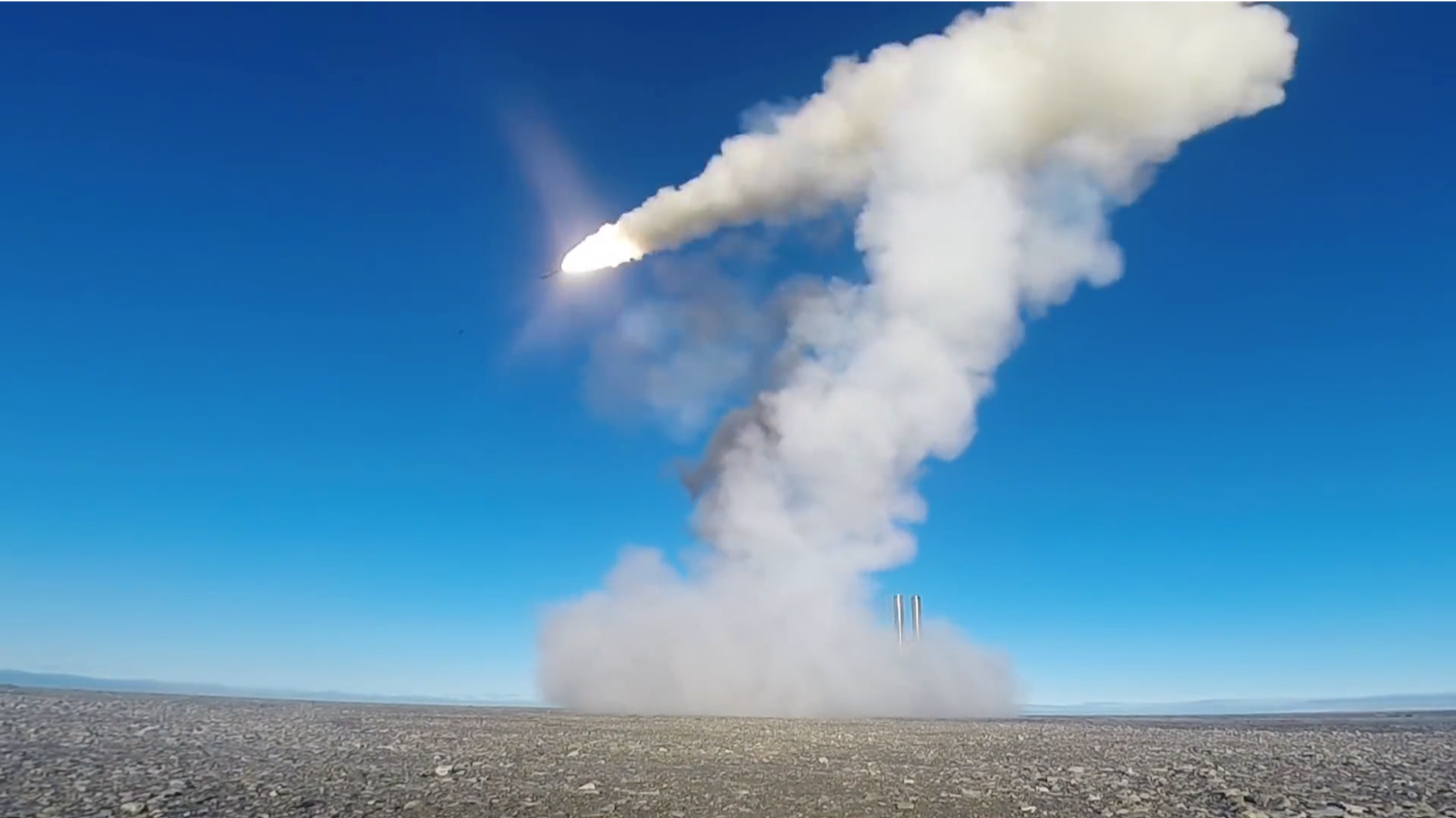 The launch of an Oniks missile from the Bastion-P TEL, September 26, 2018 (Russian Ministry of Defense). 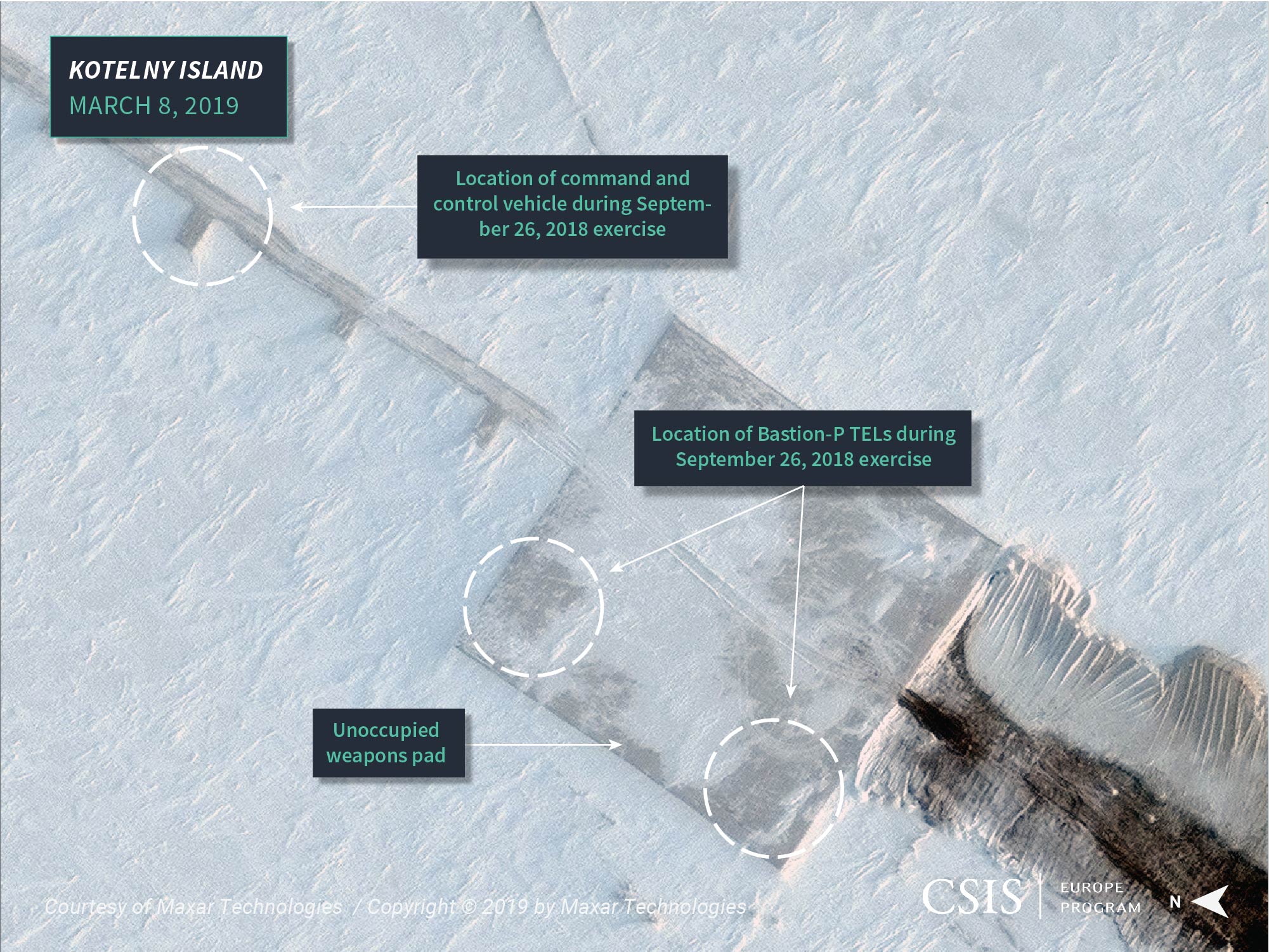 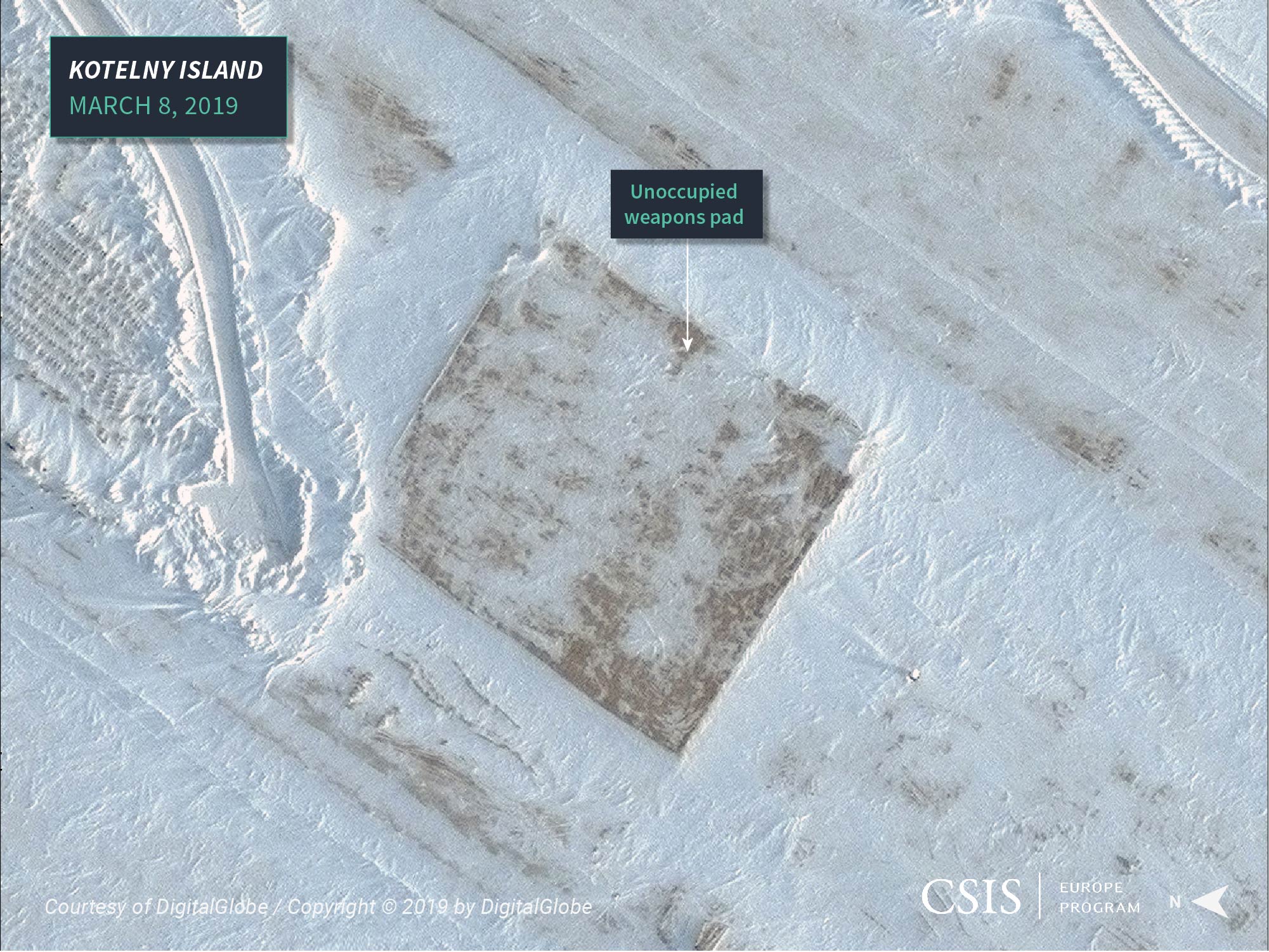 THE MAKING OF KOTELNY

During the first two weeks of September 2013, a Russian Navy flotilla offloaded personnel, heavy engineering equipment, and material to begin construction of the new base on Kotelny. Aside from housing and support facilities, contemporaneous reports state that among the facilities to be constructed were an “air command unit,” medical center, satellite communications facility, naval dock, and a 2,500-meter airfield (then scheduled to be completed by the end of October)—subsequently identified as the Temp Airbase.5 All of this was reported to be under the control of the Northern Fleet’s newly established 99th Arctic Tactical Group.6

The first mention of any air or coastal defense missile systems deployed to Kotelny occurred during the Vostok-2014 exercise when Russian media announced that “. . . a Pantsir-S1 coastal missile system [based on Kotelny] opened fire [and] successfully hit a Termit air cruise missile target and proved their readiness to protect Russia's northern borders.”7 The Pantsir-S1 (NATO reporting name SA-22 Greyhound) is a short-range point defense system capable of engaging aircraft, unmanned aerial vehicles (UAVs), and cruise missiles. Subsequent reports indicate that a battalion level unit equipped with the system was assigned to the 99th Arctic Tactical Group.8 Satellite imagery from 2013-2014, shows that none of the unique pyramidal weapons pads for the system had yet been constructed. 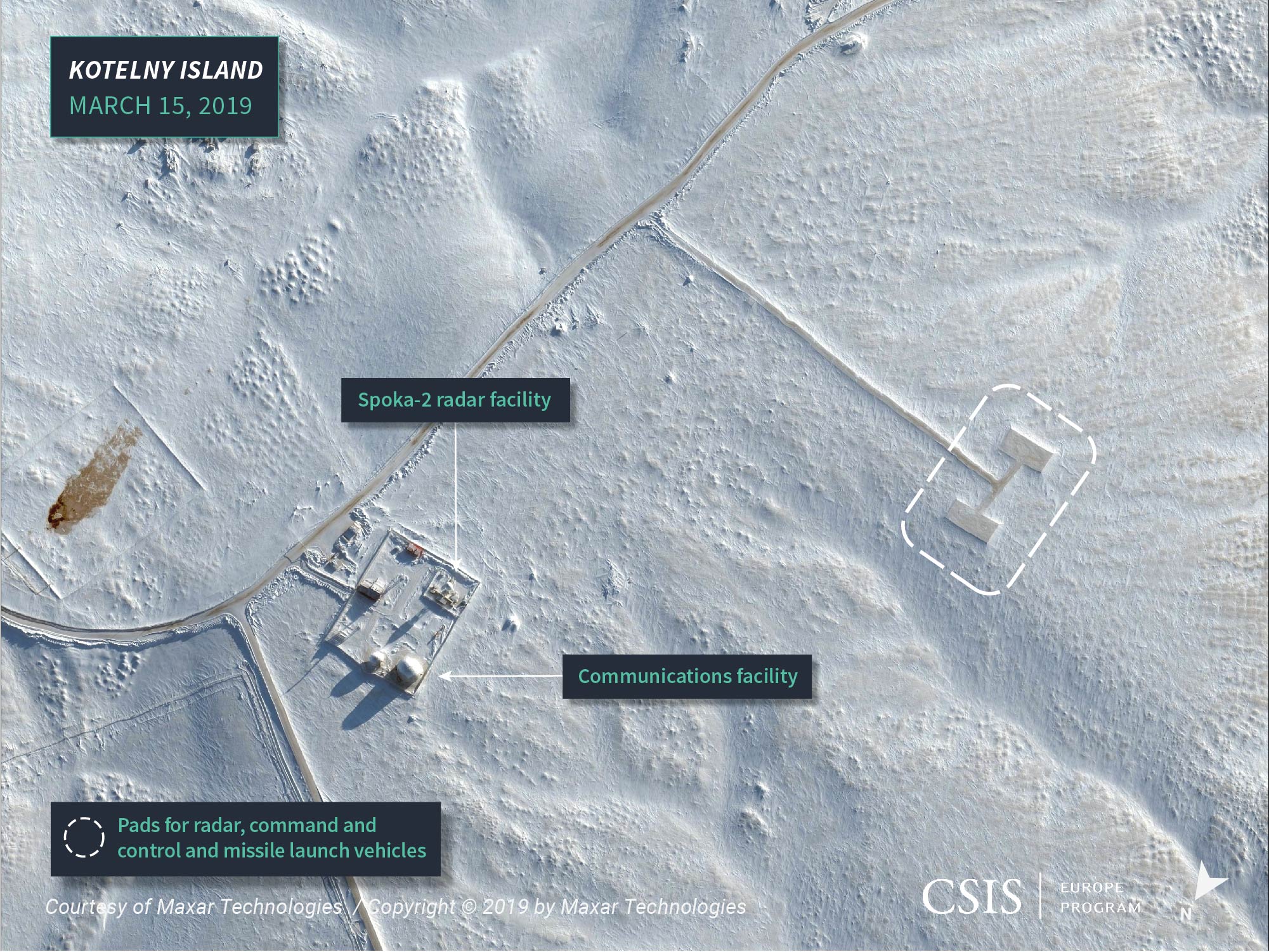 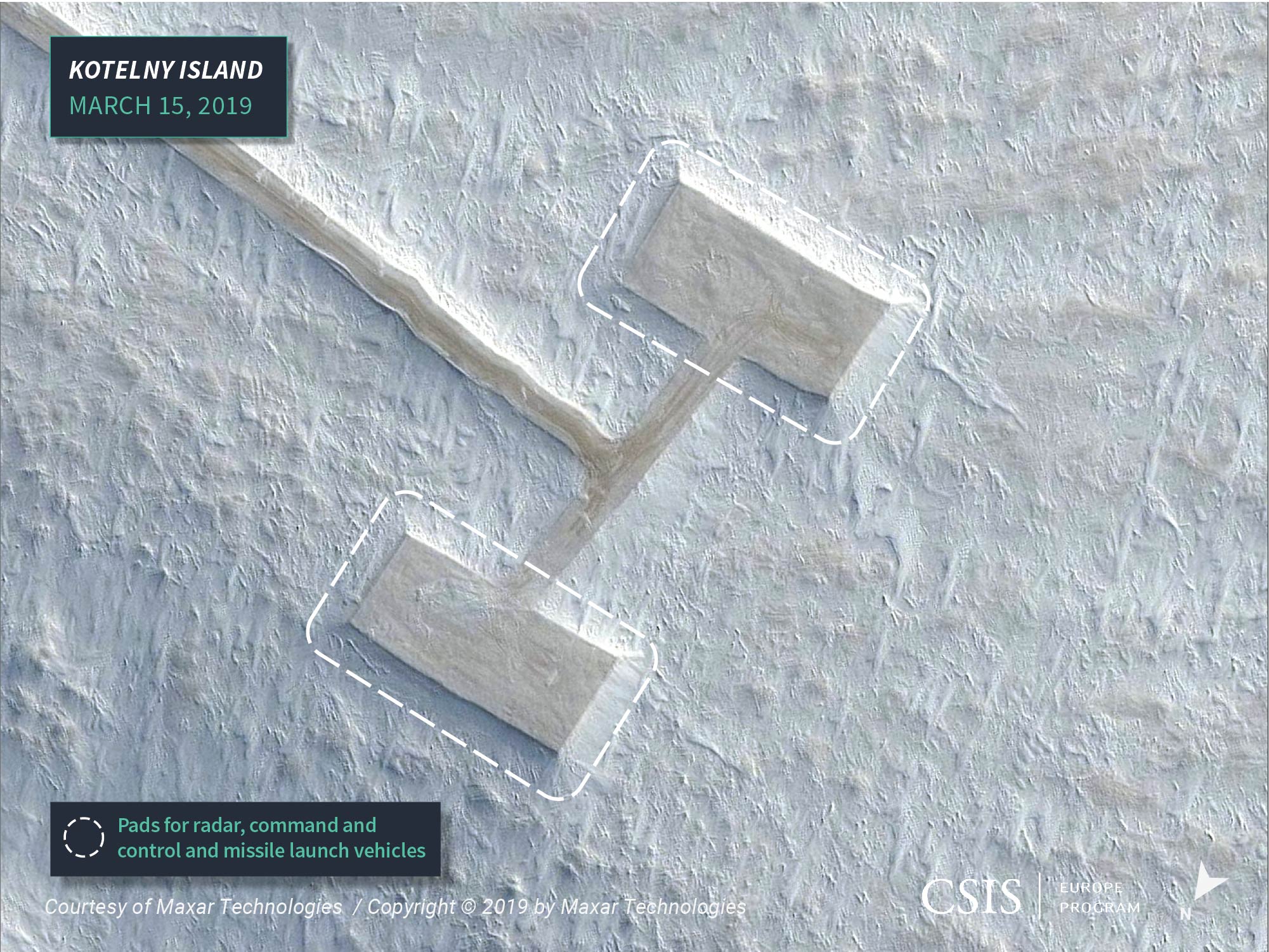 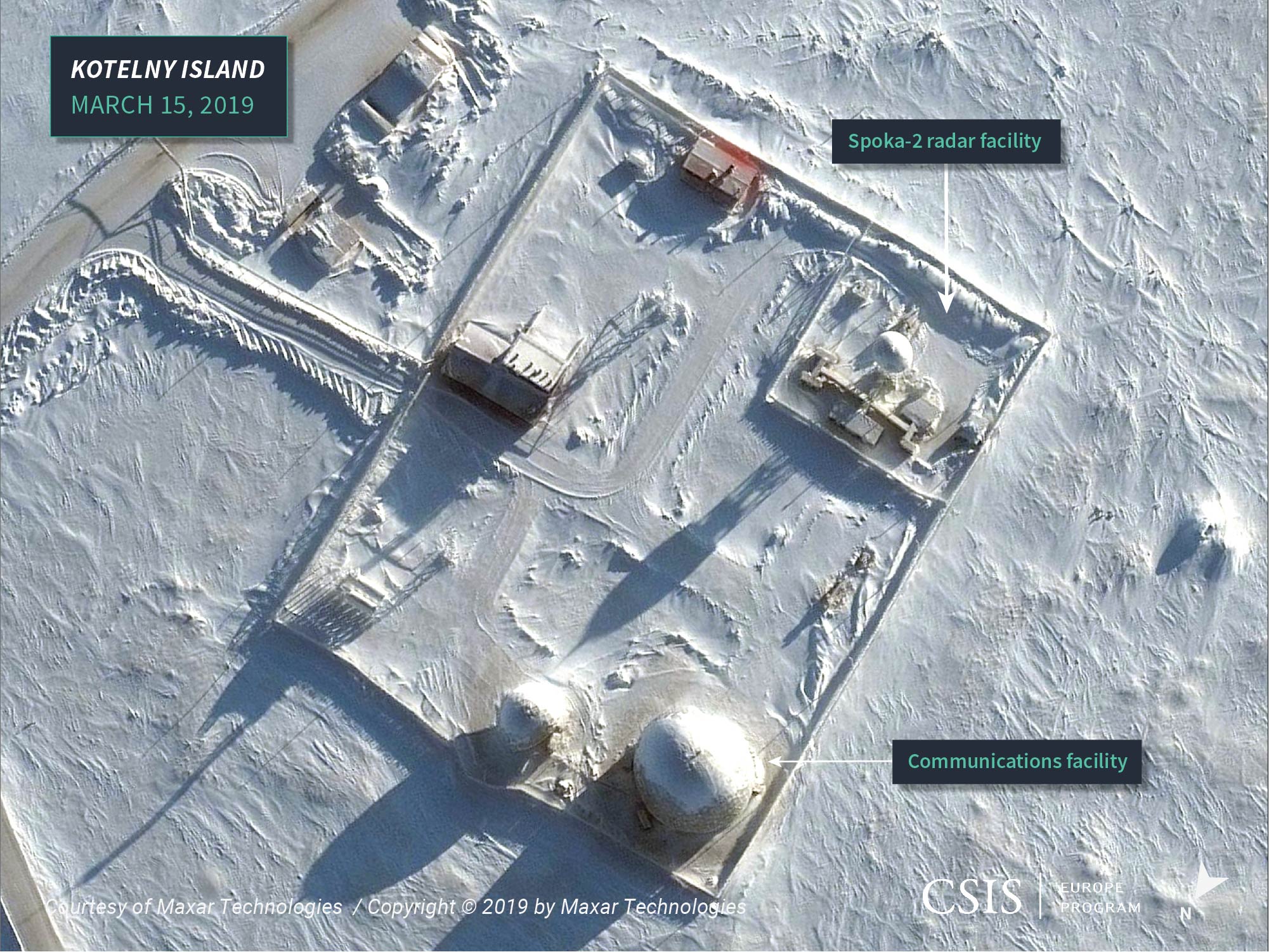 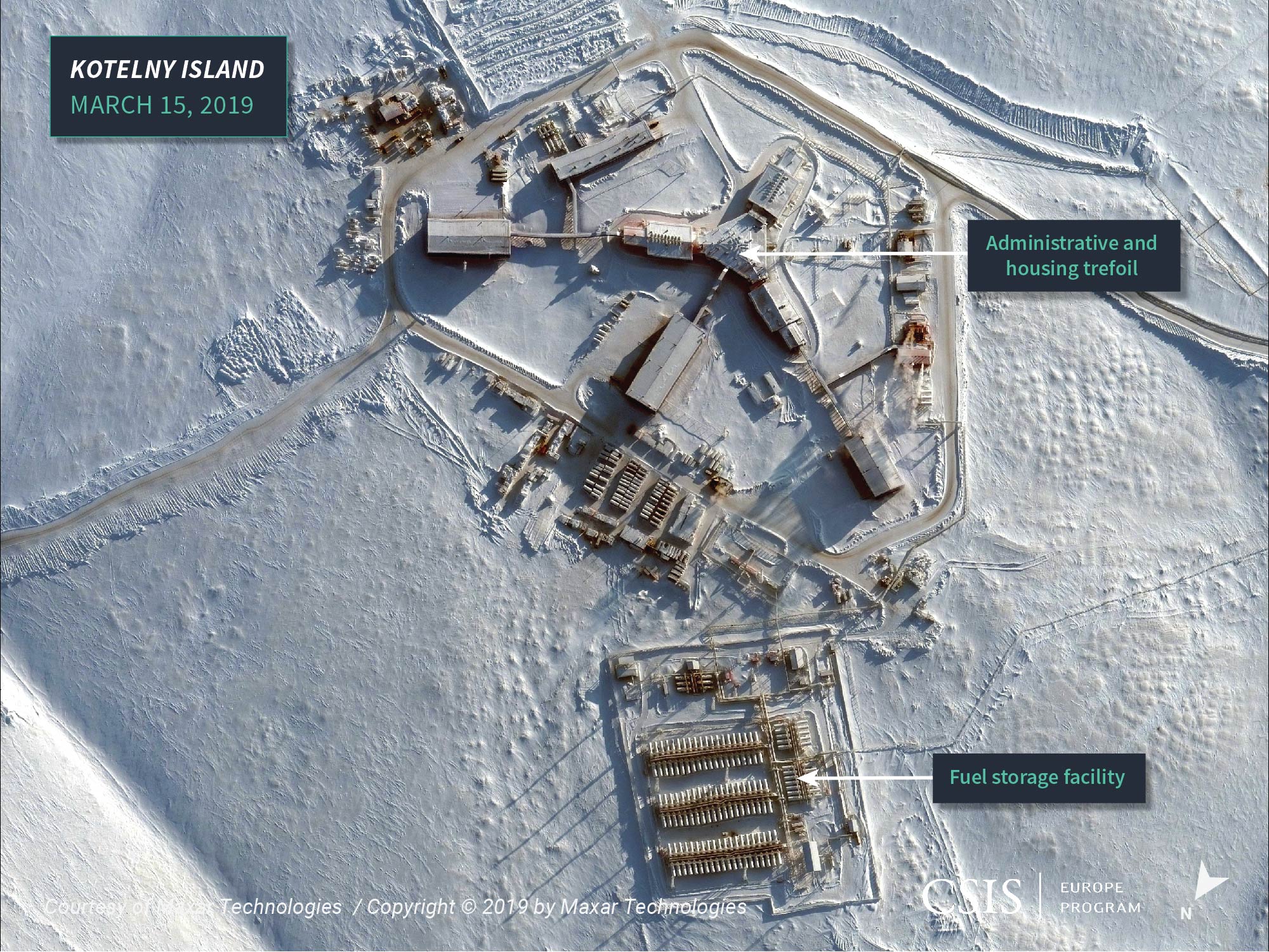 Within a year, the Pantsir-S1 on Kotelny was augmented by a unit equipped with the SSC-3 Styx coastal defense missile system.9 Satellite imagery shows that the first of the unique weapons pads—the twin complex 1.8 kilometers southwest of the housing and administration trefoil—was constructed during September 2015. It is likely that it was from here that both Pantsir-S1 and the older SSC-3 Styx systems participated in a live firing exercise later that month.10

Again, both the Pantsir-S1 and SSC-3 Styx systems participated in live-fire exercises again during 2016 and 2017.12 These firing exercises were conducted from the new weapons pads along the coast and at Temp Airbase. Satellite imagery from August 31, 2017 supports this assessment as three Pantsir-S1 transporter-erector-launchers (TEL) were observed at the northernmost weapons pad. 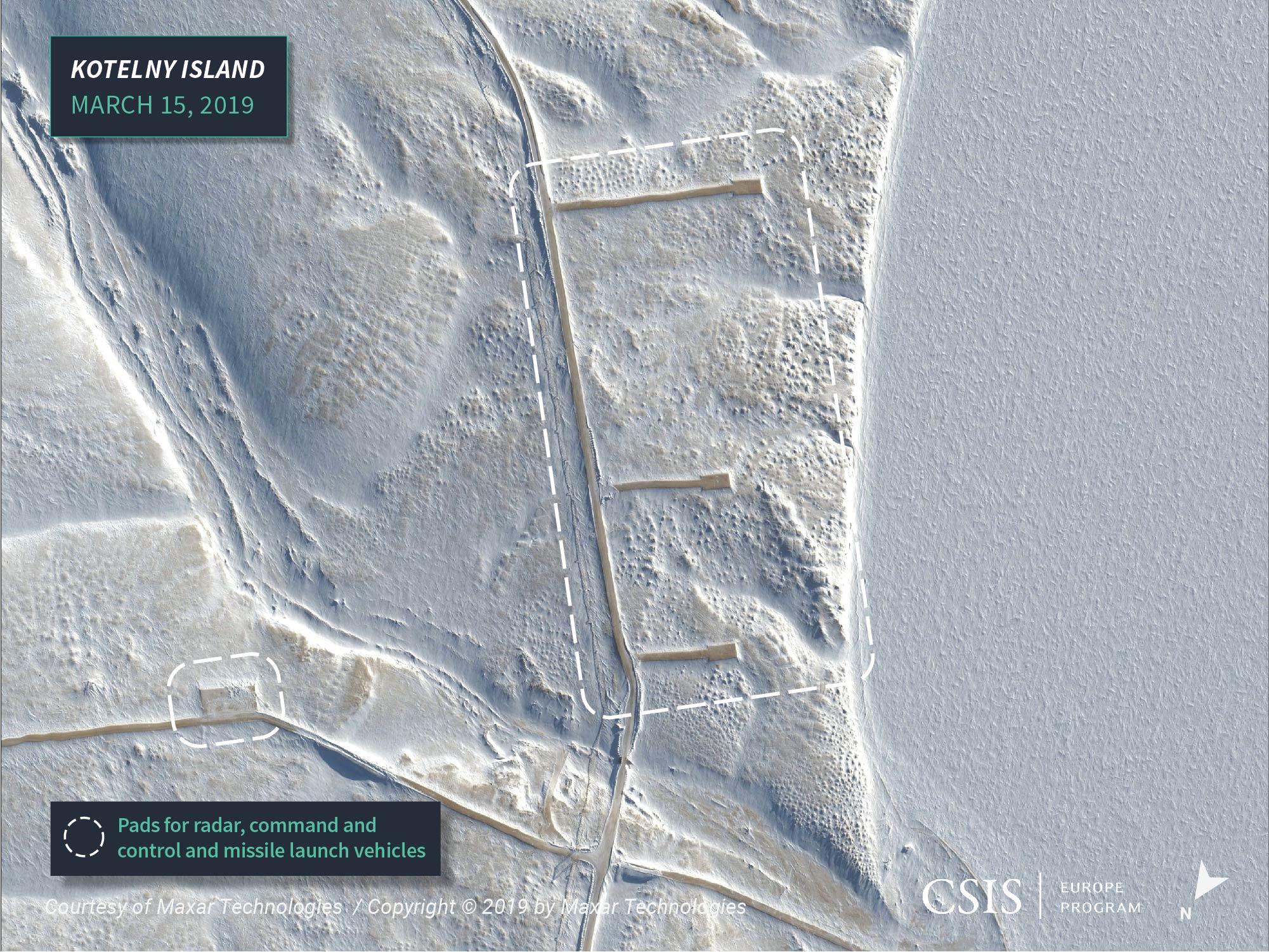 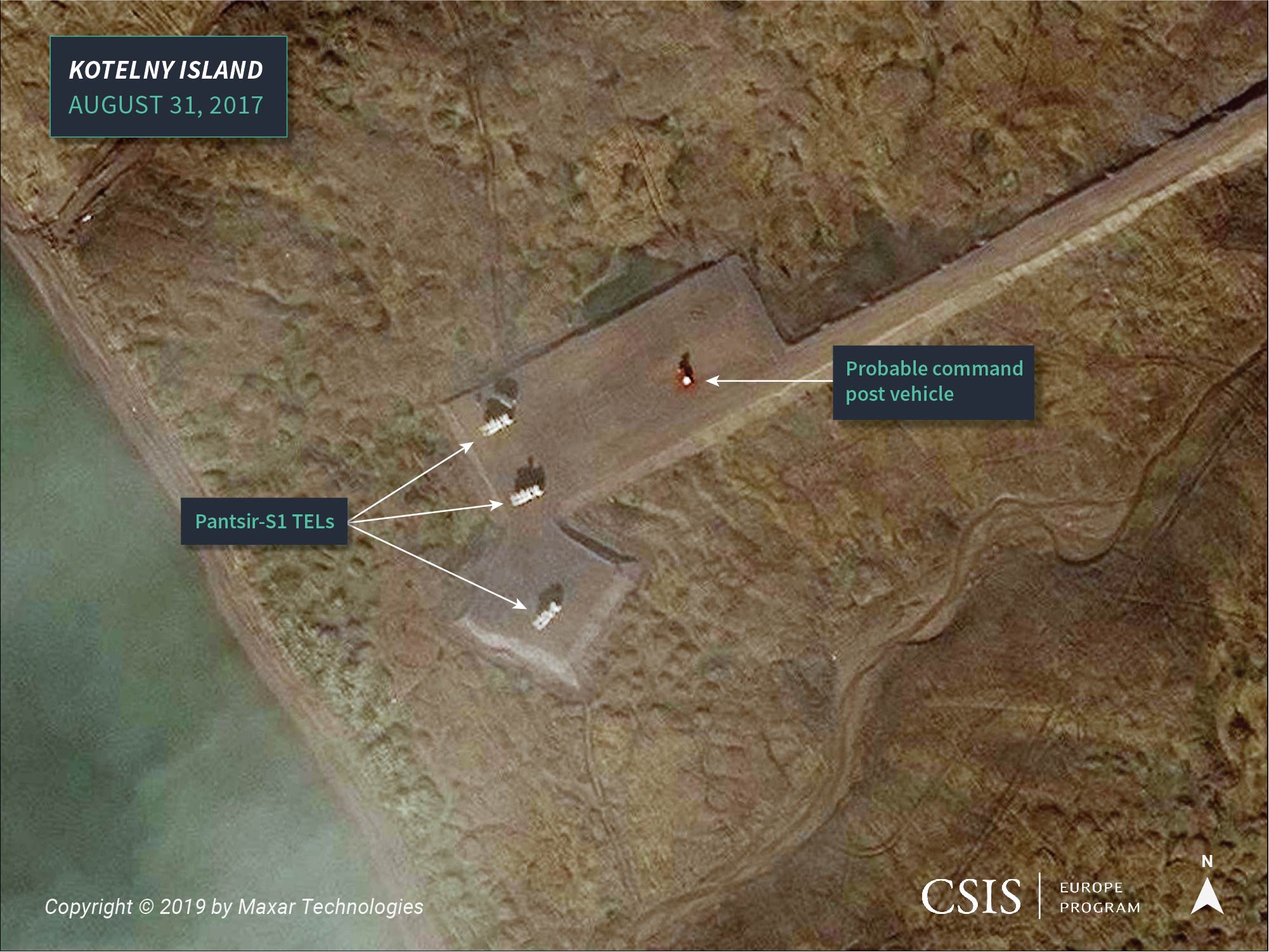 A GROWING AND MORE EFFECTIVE RUSSIAN MILITARY PRESENCE IN THE ARCTIC

During the Cold War, the Soviet Union viewed the Arctic as essential to its survivability: protection of its sub- surface strategic nuclear deterrent preserved second- strike capability while also deterring an attack. Twenty- eight years later, Russia’s military presence on Kotelny Island demonstrates a complex, layered coastal defense arrangement, which include Temp Airbase, the Sopka-2 radar system, and the Bastion-P and Pantsir-S1 coastal defense systems. Temp Airbase is not a minor installation; its length and size mean its capable of accommodating large cargo planes such as Il-76 for significant reinforcement. The Sopka-2 radar is part of a larger network covering the entirety of Russia’s northern border with penetration capabilities deeper into the central Arctic as seen on Russia’s most easterly facing Arctic island, Wrangel Island. As a cuing radar, the Sopka-2 collects data and intelligence to detect activity emanating toward the north. That data could be used to improve Russian domain awareness or direct surface-to-air missiles or guns to engage aircraft or cruise missiles. The addition of the Pantsir-S1 coastal defense system and the accompanying weapons pads reinforce Russia’s intent to defend its Arctic territory against foreign aircraft, UAVs, or cruise missiles, along with anti- ship systems (SSC-3 Styx and Bastion-P). Significant Russian improvements in its Arctic air and coastal defense over the past several years underscore its view of the Arctic as a tactical warfighting domain. In addition to the region’s role in Russia’s broader nuclear deterrent strategy, the Arctic is now a region to defend and to deny aerial maritime, or land access to NATO or U.S. forces. Russia’s efforts to secure its Arctic territory and coastline through improved air defense capabilities are vital stepping-stones to minimize its perceived defense vulnerabilities in the North.