India’s Coal Tax Is Key to Stabilizing Its Energy Transition

India’s energy system is at a crossroads. Not too long ago, I was looking out to sea from Mundra Port on the coast of Gujarat. In one direction, giant ships—capable of emptying more than 12 million tons of coal a year to feed two large thermal power plants—were tethered via five-kilometer-long conveyor belts. In the other direction, stood the Adani solar manufacturing plant capable of churning out nearly two gigawatts of solar photovoltaic modules a year. This landscape represents the paths India must transition between. The government has done a lot to encourage the growth of clean energy industry, but a recent proposal to kill a tax on coal would be a step in the wrong direction.

In 2010, the government of India sought to give a boost to India’s renewable energy sector by placing a modest tax on coal produced or consumed in the country. The revenue generated from this tax has been ratcheted up over time and currently generates roughly $6/ton. Parked in a National Clean Energy Fund, the revenue was supposed to finance the growth of the renewable energy sector in the country. In reality, over the years, the fund has been tapped for everything from cleaning the Ganges River to filling in revenue gaps created by the teething pains of implementing India’s landmark goods and services tax reform. With most of India’s state-owned utilities still operating in losses, an idea emerging from the prime minister’s office is to revoke this tax altogether to make the cost of thermal power less expensive for the utilities to purchase. Such an idea is ill-advised given the many ways the revenue could be used to shore up India’s power sector and help India successfully usher in a clean energy transition. Furthermore, the proposal is unlikely to resolve state-owned Indian utilities’ many woes. 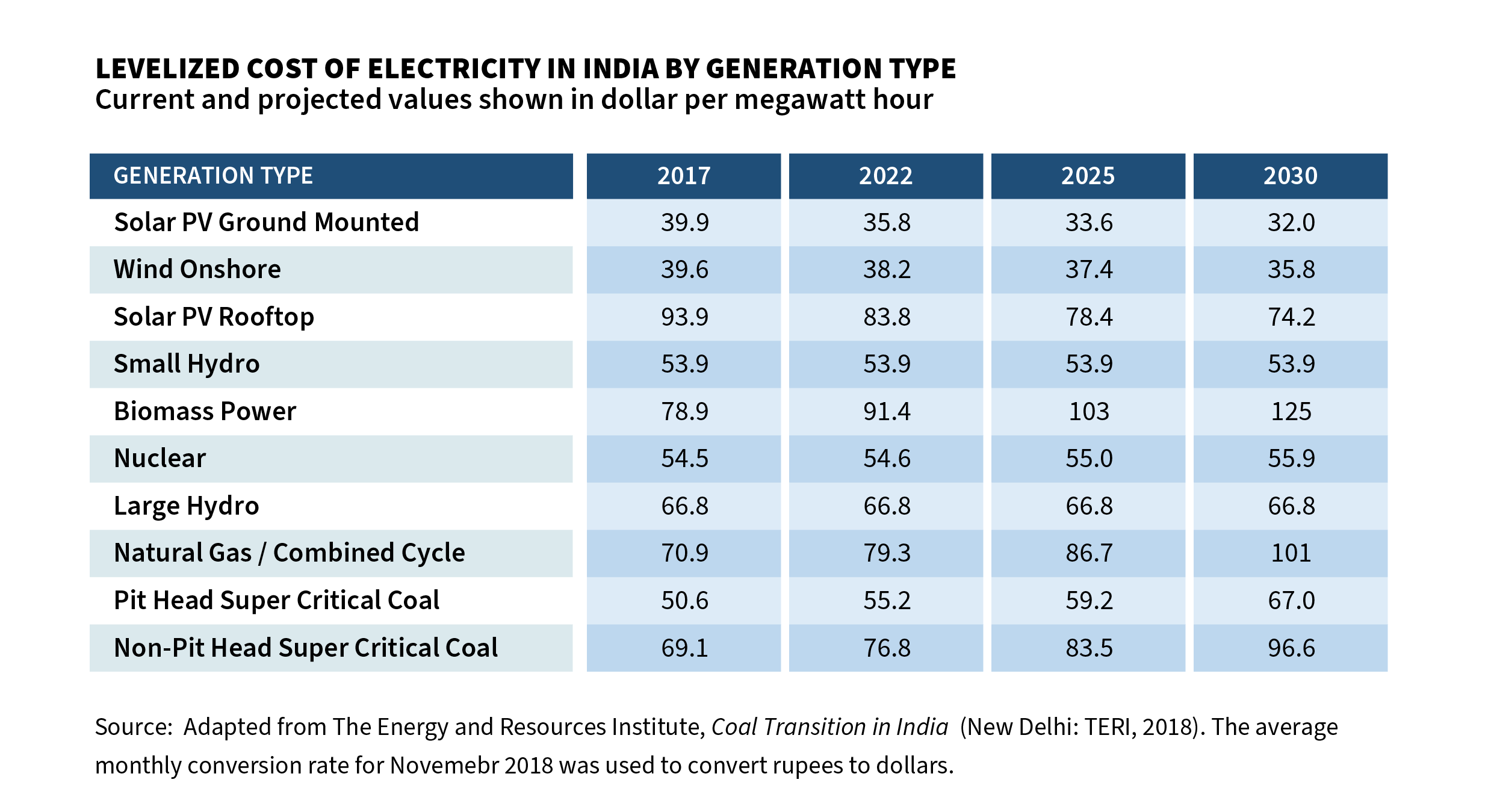 Over the last 10 years, technological and business innovation, coupled with changing market forces, has transformed the economics of India’s energy mix. Renewables have emerged as the lowest source of per unit power for India’s 1.3 billion people, nearly all of whom are now connected to the grid. Low-cost power is important for state-owned utilities who need to increase cost recovery from distributing electricity to an expanded consumer base that demands cheap power. Now, in this backdrop, India—and more importantly, the states—must carefully navigate the energy transition without upsetting the billions of dollars held mostly by public sector lenders in ailing thermal power assets. The fact that most of the nearly $36 billion in stressed thermal power assets are held by public sector lenders is a major threat to India’s financial stability and development ambitions, as the cost of capital for all kinds of infrastructure is high because of these outstanding dues. Furthermore, absent low-cost storage solutions and adequate flexing capability at existing thermal power plants, India will continue to witness high curtailment of power produced by renewable energy. So what better way to spend funds from the now renamed National Clean Energy and Environment Fund than to help shore up this problem? 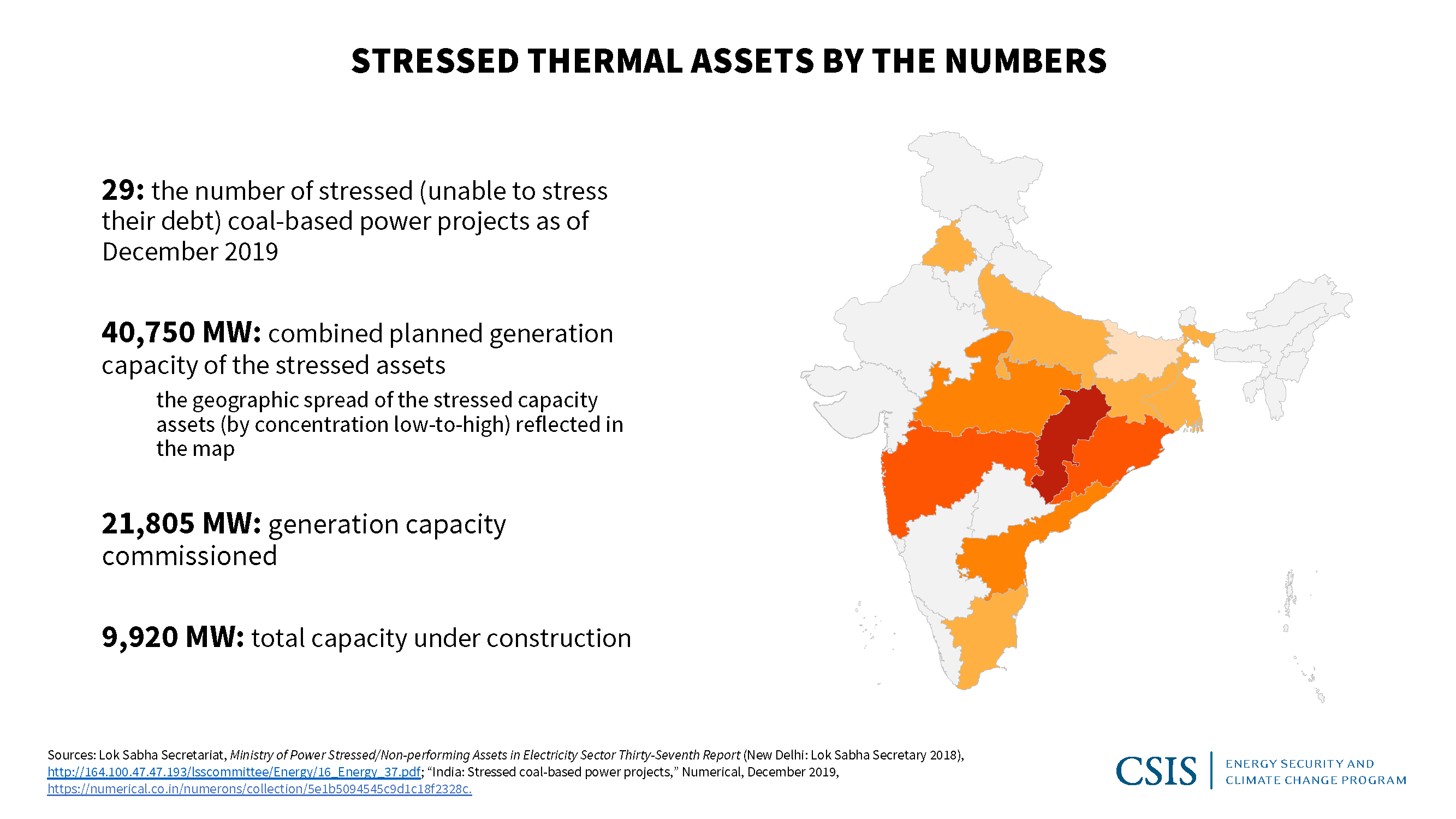 According to some estimates , since its inception, the National Clean Energy Fund has generated $21.2 billion. That is more than half of the amount owed to public sector banks by developers of thermal power plants. By accelerating a write-down of these loans and repatriating the funds to the banks with the important condition of no more lending for thermal power plants, the financial sector could theoretically be relieved of this burden and free up capital for more renewable energy, energy storage, or other green infrastructure projects. The funds could also be used to upgrade select thermal power plants that could be made “flex-ready” to deal with the intermittency of power generated from renewable sources. The non-performing thermal assets that would not need to be used because of the power production economics equation could be auctioned off by banks to use their land for other purposes, including to set up renewable energy parks. The idea of repurposing land—which comes at a premium in India—from old thermal power plants has already found its way into India’s 2020 Budget.

The timing for this change could not be more perfect with the recent announcement by the world’s largest asset manager, BlackRock, to rethink its investment strategy to be more climate change aligned (thus fossil fuel averse). In addition, industry titan Tata Power announced last April that it would shift away from thermal power generation and even Adani corporation, whose core business is coal and mining, recently pledged to use 70 percent of its capex toward the clean energy vertical of its business. To truly usher in the clean energy transition, India must make some bold decisions about altering the structures that underpin the infrastructure of the first industrial revolution. Using the wealth generated from taxing coal could help India get there.

Kartikeya Singh is a senior associate (non-resident) at the Center for Strategic and International Studies (CSIS) in Washington, D.C. Previously, he served as deputy director of the Wadhwani Chair in U.S.-India Policy Studies from January 2017 through September 2019 and senior fellow of both the Wadhwani Chair and the Energy Security and Climate Change Program from January 2019 through October 2019 at CSIS.

Asia , India , and Energy and Sustainability