Inflating the Risk? Contracting in the Face of Inflation

Inflation is an urgent issue on the minds of policymakers. Defense contractors are pressing the Department of Defense (DOD) to grant them economic relief while DOD is trying to control costs. The 1980s gives some insight into the situation the government faces and examining the use of certain contracting mechanisms can help to gauge the risks that defense contractors face.

Q1: When did DOD and contractors last face such an inflationary environment?

A1: Many active acquisition professionals, from contracting officers to vendors and analysts, have not faced an environment with notable inflation during their professional careers. As all sides update their business models and expectations, it is helpful to look back to the contracting approaches chosen the last time inflation was a significant factor.

The early 1980s saw inflation rates that surpassed the current rate of inflation, peaking at 13.6 percent during the summer of 1980. The “double dip” recession was driven in large part by the 1979 oil crisis and significant unemployment. It was not until the end of 1982 that the Federal Reserve was able to tame inflation to below 5 percent.

Defense outlays were growing in real terms during this period which started in FY 1979 and was accelerated by the Reagan build up. As a consequence (with the exception of FY 1983) in each year in the first half of the 1980s, contract spending was growing fast enough to keep pace with inflation. In such an environment, contracting officers can more easily adapt to rising expenses without having to sacrifice scope.

Q2: How have approaches to contracting change in a high inflationary environment?

A2: Firm-fixed price (FFP) contracting offers greater certainty to the government by locking contractors into fixed rates for their goods, which in turn leaves contractors at higher risk if their prices were to rise. In the early 1980s, despite some of the highest inflation rates since the end of the Second World War, defense contractors engaged in FFP contracting at growing rates from fiscal year 1980–1984, increasing from 42.5 percent to 52.5 percent of defense contract obligations, although that change can be partially attributed to a decline in unlabeled contracting. One contributing factor was Reagan’s secretary of the navy, John Lehman, who pushed for use of FFP, including for major projects.

One of the most prevalent alternatives to FFP contracting is cost-based contracting, which is often used in development due to greater uncertainty and requires detailed vendor cost reporting. Given the skyrocketing inflation rate of the early 1980s, it is somewhat surprising that contractors were willing to accept a higher level of risk, though the risk may have been ameliorated by higher prices that included inflation expectations or shorter periods of performance. Additionally, an increase in fixed-price incentive contracting was also significant during the 1980s during the Reagan buildup. Wider use of fixed-price incentive contracting was likely not a response to inflation as that style of contracting tends to be used to acquire major capabilities which were an important part of the buildup.

The 1980s also saw a spike in the use of economic price adjustments (EPAs). EPAs in fixed-price contracts can be included at the outset of a contract to incorporate price adjustments based on inflation indices or added when the contractor has a clear case that macroeconomic conditions outside of their control are making significant impacts on their ability to deliver. During the early 1980s, nearly 10 percent of all contracting included some form of EPA. While current policymakers are largely unwilling to engage in broad use of EPA amendments, this historic case may serve as a useful roadmap to navigating the present inflationary environment. 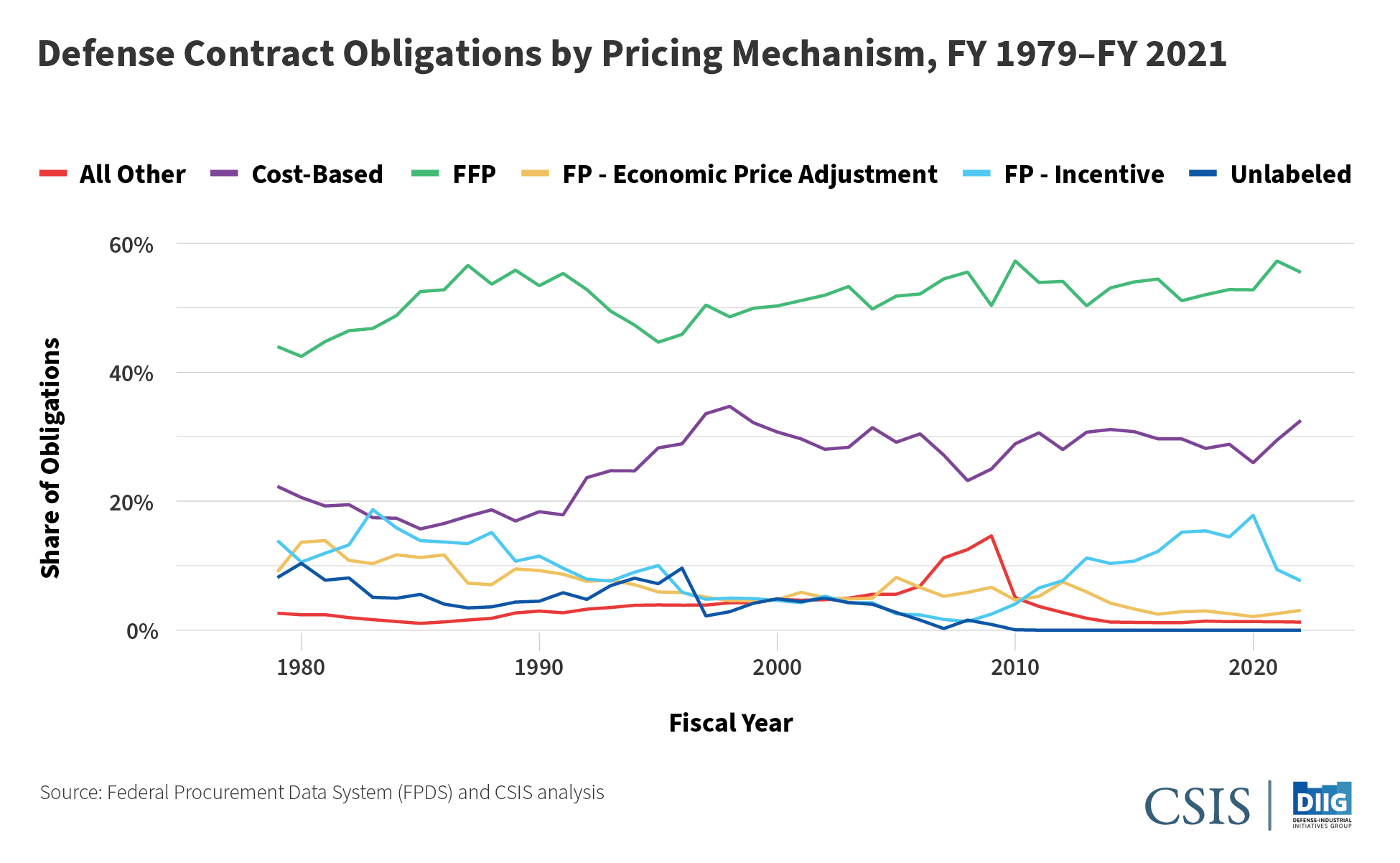 Q3: How are contractors of different sizes exposed to FFP contracts that are far more susceptible to inflation?

A3: CSIS analysis shows that small and medium contractors tend to engage in more FFP contracting, which is a common contracting method for less risky acquisitions. Larger firms that tend to work on more complex projects often have cost-based or incentive fee contracts better suited to large programs with more technical uncertainty. The second figure shows the distribution of pricing mechanisms by vendor size. Employing the more robust data available in recent years, it also adds two additional categories: “planned duration of one year or less” that includes all spending on these shorter contracts regardless of pricing mechanism used. As a result, all of the remaining categories show only contracts with a planned duration of greater than a year at the time of reporting. The other new category is undefinitized contract awards (UCA) or letter, which covers contracts whose exact pricing mechanism is still to be determined at the time of contract signing. While some of these contracts typically settle into a firm-fixed price approach, the delay in finalizing their details means that the contractor would be in a position to negotiate for inflation-related considerations.

Since FFP contracts are more vulnerable to inflation-driven price increases, smaller firms will bear the brunt of inflation as they work to deliver on their government contracts. Small and medium firms also have less ability to lobby DOD as a whole for EPAs, and policymakers should be aware of the potential disproportionate impact on small and medium businesses. However, despite the high rate of FFP contracting, risk for small and medium contractors may be lower due to relatively short periods of performance. For small vendor contract obligations, 45 percent are for less than a year, while for the Big Five contractors, that figure falls to just 11 percent. With shorter contracts, vendors can negotiate with the government more frequently and therefore recover some of their inflation-related costs upon renegotiation. There is also an important relationship between prime contractors and their supply network that public data does not cover. Prime contractors often try to lock their suppliers into multiyear efforts to drive down costs and increase supply chain predictability. However, there is anecdotal evidence to suggest that prime contractors are struggling to develop longer-term agreements in the present inflationary environment. 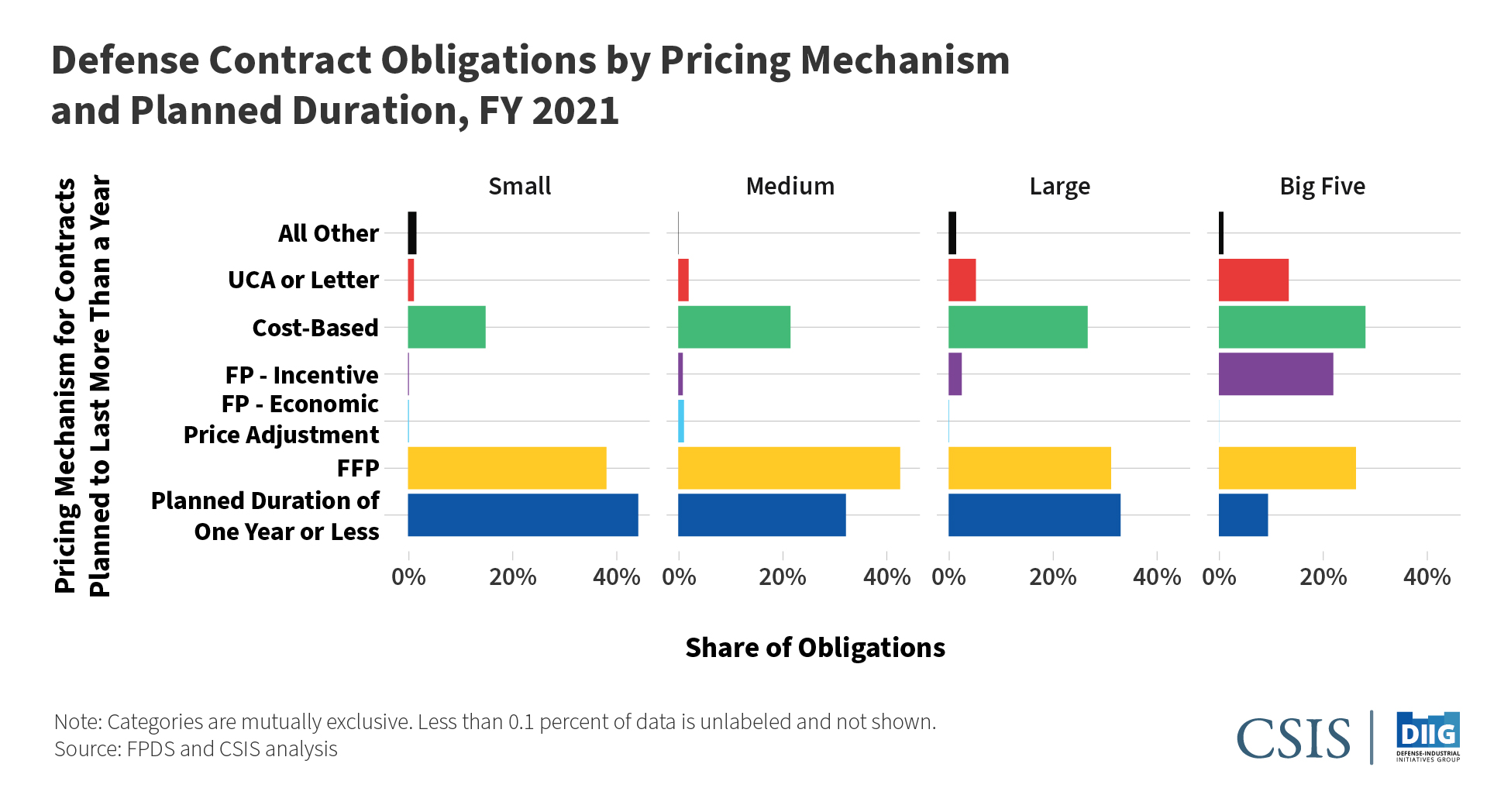 Q4: As FY 2022 data is released, what pieces of evidence will be important for assessing the impact of inflation on the defense-industrial base, and why can’t we answer those questions today?

A4: In October, Under Secretary of Defense of Acquisition and Sustainment William LaPlante stated that “the Department has not received any analyses . . . to support increasing contract prices due to inflation.” While the department has taken some steps to allow for extraordinary inflation relief in certain situations, it is clear that senior leadership has not been convinced that systematic steps are necessary to address claims that inflation is seriously impacting defense contractors. With concrete data on the impact of inflation, DOD leadership will likely grant extremely targeted EPAs to ensure best value for the taxpayer and preserve the departments buying power.

As FY 2022 data becomes available in January of 2023, the CSIS Defense-Industrial Initiatives Group will begin to look for signs that inflation is having an impact on contractors’ ability to deliver and work with DOD. There could be evidence of DOD granting EPAs or shortening the length of contracts to drive down inflation-related risk. More concerning early indicators of inflation’s impact could be a decrease in the number of contract options that defense contractors are exercising or an increase in the number of contract terminations. For these indicators, the Defense-Industrial Initiatives Group expects that the impacts will not be uniform across the defense industry, though it remains to be seen if smaller firms will bear the brunt of impact of inflation on government contracting.