Q1: Why are public health officials concerned about the current influenza outbreak in Mexico?

A1:An outbreak of influenza in Mexico that has killed 20 people, is suspected to have caused up to another 129 deaths, and is believed to have caused an additional 1,600 cases of severe respiratory illness across the country has raised concerns among the international health community that the virus could provoke a global influenza pandemic. A pandemic is an outbreak that has widespread and sustained human-to-human transmission. With at least 64 laboratory-confirmed cases in the United States and 13 in Canada as of April 28, and with suspected cases in New Zealand, Spain, and the United Kingdom, the virus appears to be spreading geographically and from person to person.

Q2: What is unusual about the influenza strain circulating in Mexico, the United States, and Canada?

A2: Laboratory tests show that the strain of virus, a new subtype of the H1N1 influenza virus, is swine influenza. Influenza viruses infect a variety of animals, including pigs and birds, and can be transmitted from animals to humans and from humans to animals. Some reports have suggested that the current outbreak may be linked to a commercial hog facility in eastern Mexico, where residents of a community living in close proximity to pigs suffered respiratory illness in late March and early April. However, many of the cases currently under investigation in Mexico have involved people who have had no contact with pigs, suggesting the possibility of human-to-human transmission of the new swine virus. Some students in the United States and Canada who have been diagnosed with the swine influenza had recently traveled to Mexico or had been in contact with people who had recently traveled to Mexico, but others appear to have become infected at school or in their communities. So far, the virus appears to have caused relatively mild illness and few hospitalizations in the United States and Canada, but the cases have been more severe in Mexico.

Q3: What is the Mexican government doing to address the outbreak?

A3: From mid-April through April 27, 24 of 32 states across Mexico have reported cases of the unusual respiratory illness, and 10 states have reported deaths. Mexico City, with more than 20 million residents, has reported the greatest number of confirmed and suspected swine influenza cases. While Mexican public health officials continue to investigate the outbreak, on Friday, April 24, public officials in the federal district suspended primary, secondary, and university classes, cancelled public events for at least 10 days, and urged people to stay home from work and seek medical attention if they felt ill. On Saturday, April 25, President Felipe Calderón issued an order giving the government the authority to invoke emergency powers to enforce quarantine measures, including isolation of the ill and home inspections by public officials. By Monday, April 27, the government had closed schools across the nation. The Mexican Army has been mobilized to distribute face masks to residents of the capital and surrounding areas to help protect them from airborne transmission of the virus.

Q4: What is the international response to the Mexico outbreak?

A4: : On Saturday, April 25, World Health Organization (WHO) director-general Margaret Chan called a meeting of the WHO Emergency Committee to discuss the outbreak. The WHO has declared the outbreak a public health emergency of international concern and has issued interim guidance regarding surveillance for human infection with swine influenza. Experts from WHO, the WHO’s Global Alert and Response Network (GOARN), and the WHO’s regional office in the Americas, the Pan American Health Organization, have traveled to Mexico to assist the Mexican government in addressing the outbreak. On Sunday, the World Bank announced that it will provide Mexico with more than $200 million in loans to combat swine influenza. The European Union’s health commissioner has urged Europeans to avoid all nonessential travel to Mexico or the United States. Airport officials in Spain, which has several suspected cases of the swine influenza, are screening passengers arriving from Mexico, and other countries have announced plans to review the health status of passengers arriving from North America. Cuba has suspended flights to and from Mexico for a 48-hour period. In Hong Kong, airport officials are isolating any air traveler with a fever higher than 100.4 degrees who arrives from any city with a confirmed swine influenza case. Although influenza cannot be transmitted through cooked meat, Russia and China have suspended imports of pork from Mexico and parts of the United States.

Q5: How has the United States responded to the outbreak?

A5: U.S. Customs and Border Protection officials are screening the health of passengers arriving by air, land, and sea in order to detect and address potential swine influenza cases before they enter the country. The Centers for Disease Control and Prevention (CDC) in Atlanta, which serve as an international influenza reference laboratory, have worked to test and confirm samples of the virus from patients in Mexico and the United States. CDC officials are working closely with colleagues in Mexico and Canada to monitor and address the outbreak. On Sunday, April 26, Secretary of Homeland Security Janet Napolitano declared a national public health emergency, authorizing the transfer of antiviral medications from the federal stockpile to states where confirmed cases have been reported. School officials in communities in New York and Texas, where students have been diagnosed with swine influenza, have suspended classes for several days to prevent transmission of the virus among the student population.

Katherine E. Bliss is deputy director of the Americas Program at the Center for Strategic and International Studies in Washington, D.C. 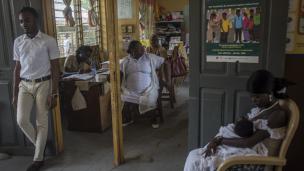 Primary Health Care and Immunizations in the Covid-19 Contex
May 18, 2021
Upcoming Event 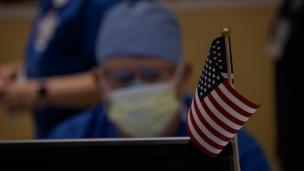 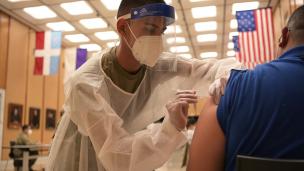 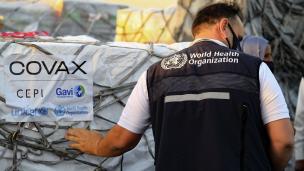